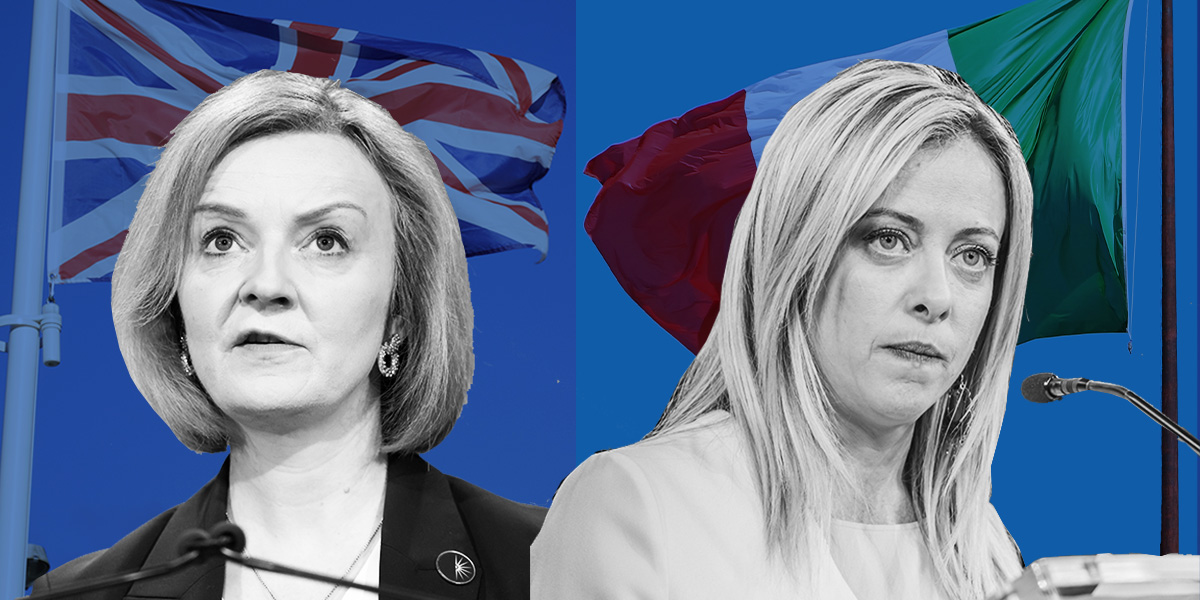 Truss and Meloni have both won victories – one in the UK over her Conservative party leadership rivals, the other in Italy’s general election – within three weeks of each other. Both politicians face a backlash from financial markets that encourage excessive borrowing when interest rates are abnormally low. As de Larosière writes, illusions of comfort inevitably shatter when financial conditions deteriorate.

Truss is beset by self-inflicted Conservative party difficulties: inept execution of European Union withdrawal and failure to heed lessons of common sense and history over picking fights with financial markets. Italy’s travails have still deeper roots, reflecting failure to achieve anything like adequate economic growth over a 30-year period both before and after membership of monetary union.

In her early statements promising ‘responsibility’ after her election win, Meloni, leader of Italy’s far-right Brothers of Italy party, has appeared better attuned to market sensitivities. By contrast, Kwasi Kwarteng, Truss’s chancellor of the exchequer, blithely ignored serious internal warnings that his calamitously received 23 September tax package could provoke a negative financial market reaction. The result has been a collapse in sterling, government bond prices and the Conservative party’s residual reputation for economic competence.

Meloni has yet to endure her baptism of fire. Her first tussles with the markets may arrive soon after her expected appointment as prime minister next month. The sharp rise in ‘spreads’ (to between 2.4 and 2.5 percentage points) between 10-year German and Italian government bonds provides a foretaste of problems ahead.

The widening spread has represented market forces as the European Central Bank has not been intervening to support more highly indebted member countries’ bond prices. The ECB intervened sizeably to prop up Italian and Spanish bond prices in July under flexible reinvestment of maturing bonds in its ‘pandemic’ portfolio. But these additional spread-narrowing purchases are understood to have stopped over the past month.

Irritatingly for populist politicians wishing to show they are in charge, the immediate futures of Truss and Meloni depend on the actions of unelected central bankers.

Bank of England bond market intervention announced on 28 September has averted a projected meltdown of the UK pension fund sector threatened by an unprecedented rise in gilt-edged yields. Andrew Bailey, the Bank governor, has redeemed his pledge (made at an OMFIF meeting on 12 July) to change course over planned government bond sales in the event of market distress.

Yet by announcing £65bn of government bond purchases over 13 days at a time of rising interest rates, he is countering his undertaking during that meeting to align all the Bank’s monetary tools in the same direction. Perhaps he is politely telling Truss that she has 13 days to get another chancellor.

Bailey was under attack for alleged inflation incautiousness during Truss’s leadership campaign. After her inaugural misjudgements – including the quixotic sacking of Tom Scholar, the Treasury permanent secretary – losing a Bank governor would appear overly careless. Despite past mishaps, Bailey’s position is a lot more secure than a month ago.

Meloni’s economic policy course – and her ability to make good election promises (above all by right-wing coalition allies) on tax and spending – will be greatly influenced by ECB action to shore up Italian debt. The faction on the ECB council favouring tighter money has won support for continued interest rate hikes through the complicated bargain of agreeing a ‘transmission protection instrument’ for potentially supporting the bonds of weaker euro members.

Yet important TPI details have not been spelled out, including on whether (as is likely) the Banca d’Italia would be called upon substantially to shoulder the risks in the case of Italian bond intervention. A 26 September statement at the European parliament by ECB President Christine Lagarde, ruling out intervention to correct ‘policy errors’ by an incoming Rome government, confirms the impression that the ECB is highly reluctant to implement the scheme.

The Truss government’s misfortunes outside the EU have continent-wide ramifications. European central bankers regard sterling’s decline as a welcome factor helping rein in any planned Meloni economic excesses. Those on the governing council who are wary of reducing the ECB’s balance sheet will take comfort from the Bank of England’s about-turn over quantitative tightening. This increases the difficulties facing some central banks of getting QT on to the ECB’s agenda next month. However, there is still determination in some quarters to start reducing the ECB’s swollen balance sheet as soon as possible.

There are intriguing parallels with a landmark in Britain’s EU history: sterling’s Black Wednesday departure from Europe’s exchange rate mechanism 30 years ago. Truss and her team have comprehensively failed to heed some basic lessons.

On 16 September 1992, both Italy and the UK left the ERM. Italy returned four years later (ready to join the euro in 1999). The UK departed for good. Italy’s politicians ceded ERM membership without a fight, once the Bundesbank said it would no longer support the lira. The UK Treasury in August-September 1992 thought it could take on the markets and win. The illusion of British exceptionalism came hopelessly unstuck, just as it has done now. As in 1992, it will take the Conservative party years to pick up the pieces. Tory party economic misadventures pave the way for election defeats.