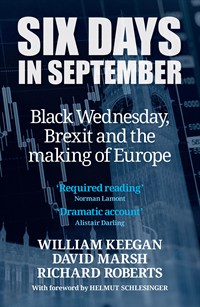 Britain entered the European exchange rate mechanism in desperation, left in disgrace and prospered thereafter– a presaging the 2016 vote to leave the European Union. Britain’s 1990 entry was accompanied by a secret Bank of England warning of future trouble. On leaving in 1992, Prime Minister John Major insisted on time-wasting consultation that led to exhaustion of Britain’s reserves. Helmut Schlesinger, Bundesbank president in 1992, says in the book he ‘regrets to this day’ how his remarks on currencies helped precipitate the run on the pound.

Praise for Six Days in September

‘David Marsh, William Keegan and Richard Roberts have written a very balanced and detailed account of the events leading up to the 1992 ERM crisis. As a result of their diligent research they have unearthed many details, some which even I had forgotten. The book will be required reading for all those interested in this period.’
Lord (Norman) Lamont, Chancellor of the Exchequer (1990-93)

‘As well as providing a dramatic account of the events leading to Black Wednesday, this book illustrates the stresses and strains of operating a single currency without ultimately requiring economic and eventual political union. It’s an issue that’s been fudged since the inception of the euro but it will never go away. It’s not an argument for Brexit, but rather it should encourage consideration of a new and pragmatic settlement for Europe, one which the UK could comfortably be part of.’
Lord (Alistair) Darling, Chancellor of the Exchequer (2007-10)

‘Six Days in September is remarkable. For the first time, a wealth of insights, detailed information and interviews from participants has been gathered and presented in a clear, objective and stimulating way. The result exceeds by far my own expectations. While I thought it was pretty close to the scene, I had no idea, before reading the book, of the tensions and differences among British decision-makers when the UK joined the ERM and thereafter. The book includes a forensic account of the pound’s entry in 1990, a process with overtones of egocentricity and nationalism, which was no doubt somewhat faulty. For historians, for students, for those who lived through these dramatic events, and for all who are interested in international financial co-operation, Six Days in September is exceptionally valuable. It is not only a precise and faithful account of the facts. It also provides a vision of how history can be derailed – a source of reflection from which we can draw many lessons for the present and future.’
Jacques de Larosière, Managing Director, International Monetary Fund (1978-87); Governor, Banque de France (1987-93); President, European Bank for Reconstruction and Development (1993-98)

‘Six Days in September is a book for those who were there at the crash of sterling out of the exchange rate mechanism. It’s also for the rest of us who want to understand how the UK steadily distanced itself from European monetary union and then the European Union itself with Brexit. A riveting account written by three authors who bring their unique and varied talents to tell an electrifying story.’
Prof. Lord (Meghnad) Desai, Emeritus Professor of Economics, London School of Economics and Political Science

‘A wonderful book. Living through the events before, during and after “Black Wednesday” was a dramatic experience. Reliving them through Six Days in September revives all the drama, but now mixed with deep insight and understanding.’
Roger Bootle, Executive Chairman, Capital Economics; author, The Trouble with Europe

‘A hugely valuable follow-on from OMFIF’s earlier splendid publication by Richard Roberts analysing the 1976 sterling crisis. Brexit is just the latest in a series of headline-grabbing, reputation-destroying British crises. While “Black” Wednesday ultimately helped Britain by (just) keeping us out of the euro, faster growth than on the continent was down to Thatcherism. Exaggerated forecasts of Brexit effects from both sides are equally implausible.’
Charles Dumas, Chief Economist, TS Lombard, formerly Lombard Street Research

‘Six Days in September is no dry study of dreary economics. It is a dramatic story of people and politics and of events that resonate to this day.’
Sir Stephen Wall, UK Permanent Representative to the European Union (1995-2000); EU Adviser to UK Prime Minister (2000-04); author, A Stranger in Europe

‘This is a brilliant book, authoritative, informative and combining the elements of a Greek tragedy with the suspense of a modern Scandinavian thriller. While stripping bare the events and personalities that led to and followed Black Wednesday, Six Days in September provides important insight into Britain’s roller-coaster relationship with the European Union and why we are now on the verge of a catastrophic Brexit.’
Sir Brian Unwin, President, European Investment Bank (1993-2000)

‘A gripping and well-researched account that sets the turmoil of the days leading to Black Wednesday in a much wider context. The authors show how the divergent objectives and “tragicomic bungling” of the main players – politicians, finance ministry officials and central bankers in Germany, France and Britain – contributed to the crisis in 1992. They conclude that, while the British economy recovered impressively after leaving the ERM, Black Wednesday weakened the Bundesbank and had longer-term implications that gravely undermined European monetary union and later almost caused its downfall.’
Lionel Price, Head of European and Economics Divisions, Bank of England (1988-94); Director of Central Banking Studies, Bank of England (1994-97)