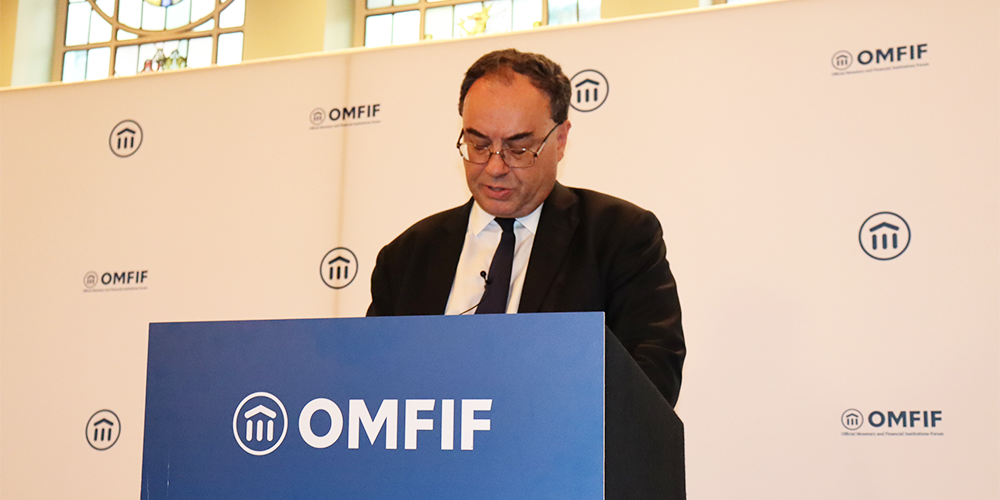 Bank of England about to pull on two levers

Bank of England Governor Andrew Bailey was quick to convey to an OMFIF-invited audience that the Monetary Policy Committee ‘will, if necessary, act forcefully’ to get consumer price index inflation back to its 2% medium-term target. And while there are economic headwinds (such as cost inflation), there will be ‘no ifs and buts’ in this respect.

Further Bank rate rises look inevitable as the MPC continues to reclaim its cherished policy tool. This it will do in tandem, though not with equal force, with a pathway of ‘active’ quantitative tightening (gradually selling the Bank’s assets). Although the governor’s remarks focused away from the short term, the next steps – an at least 25 basis point rate hike and QT plan – seem at this stage likely to be announced in the MPC’s Monetary Policy Report on 4 August.

A further rate rise – the sixth since December – would still leave real rates in negative territory, suggesting more to follow. Yet, with the governor expecting inflation to ‘come down rapidly next year,’ doubtless reflecting base-effect as well as the lagged impact of rate rises so far, growth slowdown and low estimates of where longer-term bond yields might lie, there may be a limit to these rises. The main risk being, of course, the unintended consequence of a deep recession.

One of the main estimates considered is the real equilibrium long-run interest rate, or ‘R*’ in BoE speak. In the UK and other major economies, this has been held down since the mid-1980s by such factors as increasing demographic longevity and slower productivity growth. The likelihood that these remain suppressants suggest high hurdles before R* can rise significantly going forward.

These estimates are obviously open to new forces, such as climate change. But, while it’s surprising the governor plays down the constraining impact on long-term rates from over a decade of quantitative easing, he presumably therefore expects little upward pull on them from active QT.

QT offers an extra lever for the Bank to pull. It would allow Bank rate to peak lower than otherwise, give comfort the MPC is not ‘behind the curve’ and go some way to reducing the downside of QE, evidenced by asset price distortions, suppressed saving and funding strains on many pension schemes.

Yet, with it being ‘uncharted territory’ and the Bank rightly keen to minimise disruption (and thereby rising bond yields and potentially a higher R*), this is likely to be no more than gradual. In this way, it’s unlikely to be symmetrical to the hard-and-fast roll out of QE after March 2009.

Behind the scenes, BoE staff will work on refining R* estimates and solving the ‘investment puzzle’, where the growth of ‘intangibles’ (such as IT software spend) relative to physical fixed investment may be contributing to an underestimate of total capital expenditure in the UK’s national accounts data.

This leaves the MPC with the challenge of setting the monetary dials in a credible way. It means both re-asserting policy independence as its balance sheet remains bloated, and more visibly returning CPI inflation to target. The latter of which, as the governor accepts, is ‘the biggest test of the system.’