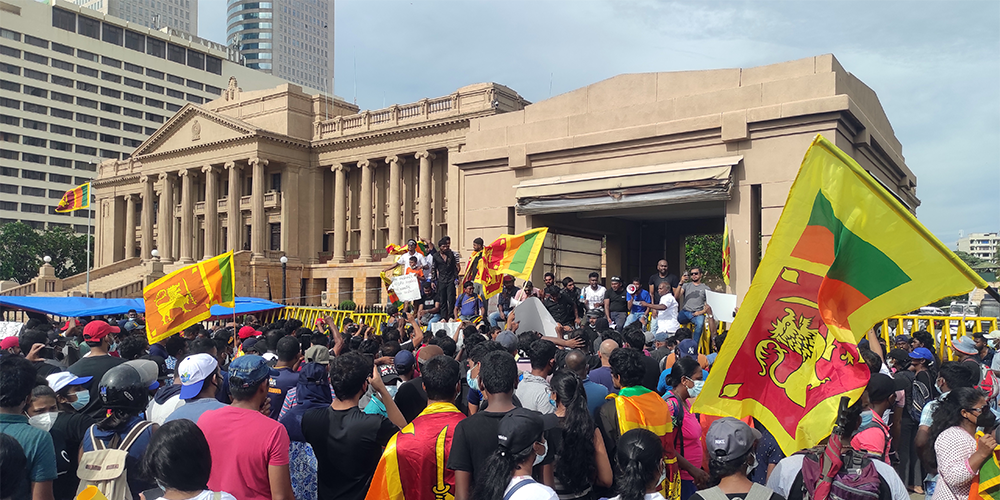 Debt distress could spread to other emerging markets

Sri Lanka has been thrust into the limelight after plunging into political and economic crisis. The country lacks a functioning government after the president fled from mass protests this week. Foreign exchange reserves have been depleted and the country is embroiled in a messy public debt default. There are lessons here for countries outside of Sri Lanka’s picturesque shores.

From an economic perspective, Sri Lanka’s turmoil is a textbook balance of payments crisis. The pandemic crippled its tourism-dependent economy due to a slump in international travel, weighing on a key source of external revenues. Meanwhile, rising imports and large debt servicing costs – a consequence of loose fiscal policy and heavy foreign exchange borrowing – caused a rapid decline in international reserves.

This precarious situation was compounded by this year’s surge in oil prices – a key commodity import – and rising US interest rates. The central bank simply did not have the firepower to defend the Sri Lankan rupee against these global pressures and the currency has collapsed by more than 40% against the dollar so far this year.

The knock-on effects have been disastrous. The local value of Sri Lanka’s substantial foreign currency debts has surged, causing the government to default in May. A weaker currency has pushed inflation to around 50%. And the continued lack of foreign currency – reserves stand at less than $1bn – has led to a shortage of vital imports of food and fuel. The economic turmoil has resulted in public outrage and an ousted president. It is vital that a new government is instilled to bring political stability and secure external financing, most likely from the International Monetary Fund, to prevent an even deeper economic crisis in the near term.

This episode in Sri Lanka has three important lessons for the wider global economy. First, central bank reserves provide a vital buffer for countries facing tighter global financial conditions. In OMFIF’s Global Public Investor 2022, central banks said they are unwilling to significantly draw down their reserves in the event of a crisis. But that’s not to say they would be total bystanders. A handful of central banks in Asia, such as the Reserve Bank of India, are already drawing down their reserves to alleviate the downward pressure on their currencies from rising US interest rates and high oil prices. Fortunately, most economies do not encounter the same balance of payments strains as Sri Lanka and, in any case, there are ample FX reserves to prevent other currencies from facing the same fate as the rupee.

Second, Sri Lanka may be the first domino to fall in a broader emerging market debt crisis. IMF Managing Director Kristalina Georgieva warned that almost a third of EM economies face debt distress due to the challenging global economic backdrop. The good news is that most large EMs should be resilient to the pressures from a stronger dollar. Government debt is primarily denominated in local currency terms in major EMs such as India, Brazil and South Africa. But there are pockets of risk in other economies with large FX debts, including Argentina, Pakistan and Tunisia. Sovereign dollar bonds are trading in distressed territory and there are already signs of political instability in these three countries.

Third, Sri Lanka will be a key test of how sovereign debt restructurings are resolved with a new player in town – China. Sri Lanka has received substantial funding as part of the Belt and Road Initiative, and it is unlikely that the authorities in China will accept losses on these loans. That was the case when Sri Lanka’s government was unable to pay its loans to China for the Hambantota Port. China played hardball in negotiations and, in 2017, took control of the port on a 99-year lease.

With China a major creditor, it may complicate matters for Sri Lanka’s government to reach a necessary new IMF deal. The Fund would presumably want some assurance that any financing will go towards the real economy rather than paying Chinese creditors. Moreover, it will be difficult to strike a deal with private creditors, who face the brunt of a necessary write-down of Sri Lanka’s debts if China refuses to budge. The upshot is that the stage is set for a prolonged battle between Sri Lanka and its creditors. This is one of the many challenges that the next government will face as it inherits a freefalling economy.

Nikhil joined the BBC World Business Report to discuss this topic on 13 July.