Meloni looks set to lead Italy after election no one wanted 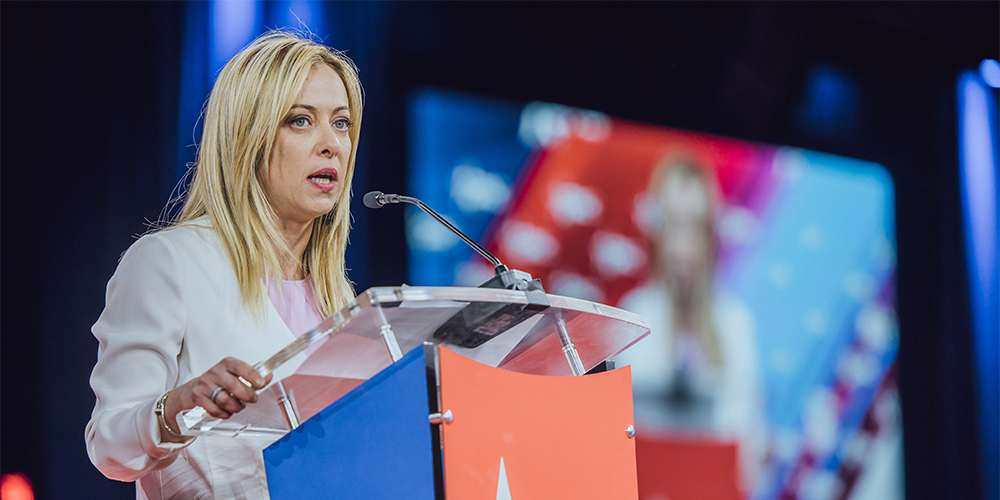 Giorgia Meloni could become Italy’s next prime minister if her far-right Brothers of Italy party, as widely expected, wins the general election on 25 September. She has steered a middle line between the conflicting challenges of not losing touch with her hard-core voter base (which includes neo-fascists) and wooing the moderate conservatives she needs to reinforce her position as Italy’s largest party.

Meloni has tried to clear her earlier political history of openly neo-fascist traits and has distanced herself from now embarrassing allies such as Viktor Orbán, Hungary’s prime minister. She has presented herself as a reliable interlocutor to the business and financial sectors and consults privately on a regular basis with Mario Draghi, prime minister since February 2021, who has firmly and repeatedly declined to run but whose legacy continues to hover over the horizon.

Draghi remains widely respected. In a slightly surreal way, even some of those who supported his ousting declare their commitment to the Draghi agenda. Some even advocate his continuation as head of government. Powerful inducements for him to stay the course are concerns over whether Italy will maintain G7 unity over Ukraine and stick to the conditions for receiving money under the Next Generation EU programme. Remaining at the helm would also arguably aid the country’s struggle against inflation, but Draghi’s return to the fray appears for now to be out of the question.

Would a Meloni government have neo-fascist overtones? Unlikely. It would be the first time since the inception of the Republic in 1946. Could it be more nationalistic and Eurosceptic, putting aside the Draghi legacy, renegotiating the terms of the European Union recovery plan, adopting strong-arm tactics against illegal immigrants and taking a softer line over President Vladimir Putin in Ukraine? Yes, but it remains to be seen to what extent and with what degree of commitment.

Meloni is the de facto leader of the centre-right coalition. A bandwagon effect in public opinion is playing in her favour, but she has faced competition from her main ally, Matteo Salvini, who is trying to offset the declining fortunes of his League with a populist anti-immigrant and Eurosceptic platform. This includes support for Putin and opposition to sending arms to Ukraine. The League’s strength, however, is now practically half that of Brothers of Italy, and Salvini has been hedging by declaring himself somewhat paradoxically in favour of Nato.

Meloni has been vocal in her criticism of the ‘orthodoxy’ of the Maastricht treaty setting down the economic basis of monetary union. She has advocated overhauling the European stability pact that she says impedes Italian growth. But she has veered away from openly endorsing the call of Salvini and others for higher public debt in defiance of the European Commission and European Central Bank. The issue of whether Italy could receive support for shoring up government bonds through the ECB’s new but not totally defined transmission protection instrument is regarded as highly technocratic and has hardly been mentioned.

Meloni has been firm on the need to review the terms of the NGEU programme which is crucial to Italy’s economic survival and has faced delays due in part to domestic inefficiencies. Her attacks on Brussels’ rigidity have been often shrill but have become more muted as the election approaches. Where her real views lie, and whether she will move towards the middle ground, are open questions, as is the impact the ‘Draghi factor’ could have on her and on the early moves of a centre-right government.

Silvio Berlusconi, former prime minister – now the junior partner in the coalition and on a losing streak – is attempting to play the role of elder statesman and moderator with only limited success. Enrico Letta, another former prime minister, is aiming for his centre-left Democratic party to become the largest in the next parliament, which would add to its weight in opposition. But Letta’s chances are getting slimmer by the day. He has been campaigning on combatting fascism and autocracy, but voters appear much more concerned about rising energy and living costs and the war in Ukraine.

The fiscally profligate measures announced by Meloni and her centre-right partners may be delusional but they are effective vote-catchers. By including a couple of small hard-left parties in the coalition, Letta has jeopardised the possibility of creating a wide field (‘campo largo’) of centrist and moderate progressive parties as an effective counterweight to Meloni. He could pay a heavy price for the centre-left’s lack of cohesion.

Letta is facing competition from the right by a ‘third pole’ assembled by Metteo Renzi, former prime minister, and Carlo Calenda, a former minister for industry, that has achieved partial success in attracting disillusioned voters from both major coalitions. And he is facing competition from the hard left from Matteo Conte, personally rancorous against Draghi who replaced him as prime minister, and trying to allay the expected demise of his 5Star movement by rallying with growing success the protest vote in the south.

Despite growing animosity between Meloni and Salvini, the centre-right coalition has maintained a semblance of unity which should pay off at the polls. Italexit, a small anti-vaccine, anti-Europe, pro-Putin party led by Gianluigi Paragone, looks set to break through the 3% polling barrier and elect a few members. A reduction in the number of abstentions – currently running at 38%-42% – could affect the result of the polls and increase the risk of fragmentation in the next parliament after an early election no one really wanted. None of this bodes well for Italy’s and Europe’s future.

Antonio Armellini is Vice President of the AIICP Italy-India Association, a member of the OMFIF Advisory Board and a former Italian diplomat.