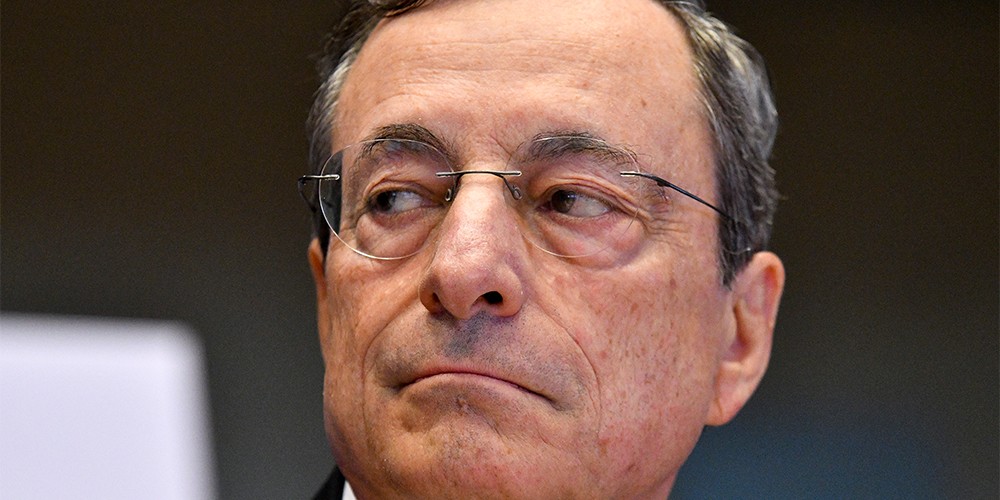 Can acclaimed technocrat survive the rough and tumble of Italian politics?

Mario Draghi is embarking on his toughest task yet. It is a still more arduous challenge than those he faced during his battle-scarred 2011-19 presidency of the European Central Bank, with few weapons, and certainly no bazookas, at his disposal.

Yet the difficulty of the task – to form a new Rome government of national unity – supports modest hopes that Italy’s warring politicians may rally round an accomplished international helmsman promising badly-needed leadership.

Draghi has been widely acclaimed outside Italy for his dramatically improvised 2012 speech in London declaring the ECB would do ‘whatever it takes to preserve the euro’. But he has no experience of Italy’s front-line politics.  A sharp-tongued Jesuit-trained master of decades of backroom infighting on economics and finance, Draghi now enters the mainstream rough-and-tumble at a time when most Italian parties are fragmenting and seeking fresh direction.

The most likely outcome is that Draghi and a new team will gain general political approval at the outset. The real struggle will come later. Many among Italy’s leading parties may underestimate that, beyond his veneer of technocratic competence, Draghi is also a seasoned and shrewd politician.

If in the next few days he overcomes political obstacles and assembles a government to tackle Italy’s myriad problems, Draghi will enter the ranks of distinguished technocrats assuming government responsibility at a time of deep-seated predicament. The struggle will be immense. With magisterial understatement, Draghi spoke on 3 February of ‘a difficult moment’, underscoring labours ahead: ‘Defeating the pandemic, completing the vaccination campaign, offering answers to citizens.’

Draghi spoke after he accepted President Sergio Mattarella’s request to form a new administration following the breakdown of the latest coalition under Giuseppe Conte, an unspectacular yet dutiful lawyer who has been prime minister since June 2018. A person who knows Draghi well said the call to the national tiller came much earlier than the 73-year-old – widely seen as eying the presidency after Mattarella bows out next year – had been expecting. The summons would test Draghi’s considerable talents, the Draghi confidant says: ‘This is the last throw of the dice. He’s the joker in the pack.’ Draghi has been given a mandate ‘independent of any political formulation’ and has pledged full consultation with parliament, but the leeway he can achieve in choosing ministers will be key to his success.

Italy’s cumulative travails – spiralling public debt, social fracturing and failure to achieve growth since the 2008 financial crisis despite financial largesse from the ECB, partly catalysed by Draghi in past years – are greater than those confronting Italy when Draghi became ECB chief in 2011 (see below). 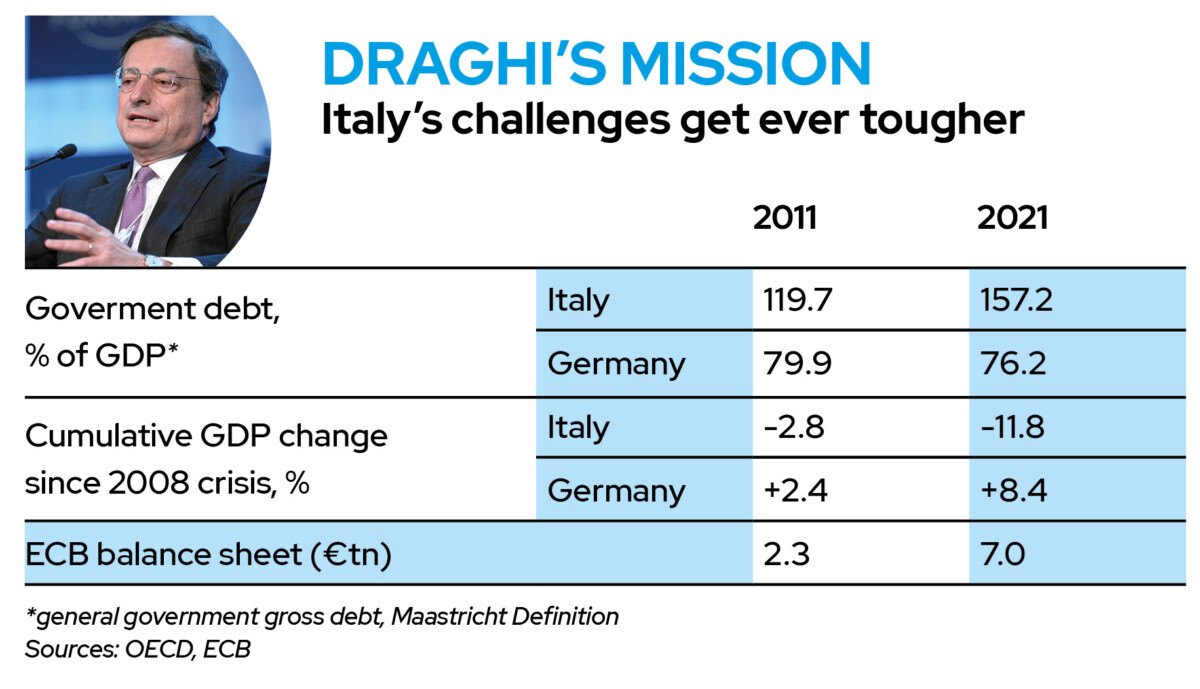 A principal objective will be to organise Italy’s administrative channels to receive an estimated €200bn in loans and grants available under the European Union’s pandemic-fighting €750bn recovery fund and other mechanisms, termed by Draghi as ‘extraordinary resources’. A senior Italian official says: ‘Putting into place a more technocratic government to draw up and implement reforms is the best solution. This would reap the benefits of a good recovery and carry out the pandemic exit phase. A high-profile cabinet led by Draghi with a clear mandate would have the majority of Italians behind it.’ Italian experts have spoken for months of the difficulties of providing adequate management for handling EU funds in Italy, where haggling over project delivery has impeded authorisations and raised doubts about effective distribution.

On an optimistic assessment, Draghi’s ascent could lead Italy out of an impasse, allowing the recovery fund to be used properly and for the ECB gradually to lower its assistance through the increasingly controversial pandemic emergency purchase programme of government bond-buying. Yet if Draghi fails to form a government, Mattarella might have no choice but to call premature elections that would intensify Italy’s troubles.

If he succeeds in the next few days, Draghi will join a line-up of past experts-turned-politicians including Carlo Ciampi, like Draghi a former governor of the Banca d’ Italia. In the 1990s Ciampi served as prime minister and finance minister and became president in 1999-2006. A less happy example is Mario Monti, the widely admired former European commissioner and Italian senator-for-life, who failed to match up to his assignment as prime minister in 2011-13 and departed with his reputation as a consummate though professorial trouble-shooter badly tarnished.

Technocratic governments have a tradition in Italy of being economically effective and politically weak. One of the underlying causes of Conte’s downfall was his insistence on retaining absolute control over the management of the €200bn in EU funds. Matteo Renzi, a former prime minister, was adamant in countering this, quietly supported by Nicola Zingaretti’s Democratic party (Pd), albeit from an opposing perspective. Keeping at bay the parties’ expectations, while retaining their support, and forming a government entirely responsible to him, will be Draghi’s first crucial test.

He can count on the support of the centre-left Pd, Renzi’s Italy Alive party and the smaller leftist Free and Equal, but does not at present have a majority. The populist 5-Star and League parties have denied support but are deeply divided. Both parties risk internal splits, but they could end up providing external support, making use of the peculiarly Italian parliamentary art form of ‘organised abstention’. Former Prime Minister Silvio Berlusconi – who clashed bitterly with the ECB and Draghi when he headed the Banca d’Italia – is playing a role (surprising to most in the world, but not to Italians) of elder statesman mediating in favour of Draghi.

The mercurial Renzi has once again shown a disturbingly dual function: he is able to point coherently to relevant issues, but the way he tackles them is often devoid of common sense. True to his ‘demolition man’ notoriety, Renzi had three aims in bringing down Conte: seal the prime minister’s fate, sow divisions within both the majority and the opposition, and use the ensuing confusion to increase his political weighting above the meagre 2% he presently musters.

Renzi has won only a partial victory. Conte will have a hard time returning to the political fray and the other parties are divided, but all are united in wanting to avoid early elections. 5-Star would risk losing over half its sitting members of parliament. The Pd would not go much beyond its present strength. The League’s Matteo Salvini would end up playing second fiddle to Giorgia Meloni’s far-right Brothers of Italy (the only ones standing to gain from early polls). If Draghi can navigate the early political labyrinth, his chances of steering Italy through to elections scheduled for no later than May 2023 will be enhanced but not secured. Much hard pounding lies ahead.

Antonio Armellini is Vice-President of the AIICP Italy-India Association and a former Italian diplomat. David Marsh is Chairman at OMFIF.