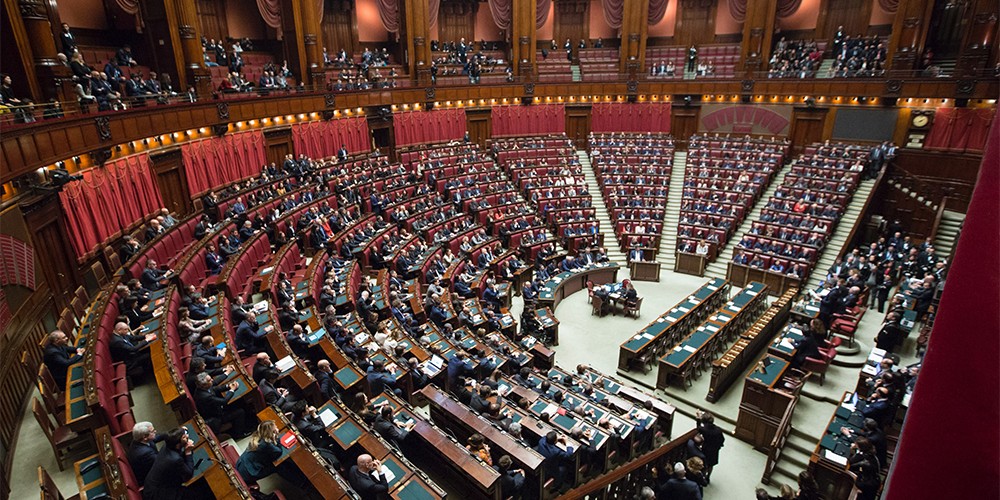 Italy is in total lockdown and a raucous debate in what remains a politically brittle situation has been put on hold. A referendum to endorse the cut in the number of MPs has been postponed until the end of the year. Parliament is debating whether to allow distance voting as some of its members fall to coronavirus. A shared sense of urgency allows the government to adopt the necessary measures, but it struggles to translate that urgency into a full sense of national unity.

His handling of the crisis has propelled Giuseppe Conte from a politically unknown figurehead into an effective prime minister, with approval ratings of over 60%. The coalition remains dysfunctional, but its partners see no other avenue open to them: playing on their weaknesses he has exercised an increasingly independent leadership. Luigi di Maio hopes to stem the meltdown of the Five Star Movement proving that it can act as a responsible governing force. Nicola Zingaretti needs more time to play out his strategy to entice large parts of the Five Star Movement into the Democratic Party fold. Matteo Renzi is locked in buccaneering tactics that give the impression he is underestimating the seriousness of the situation and could result in ‘Italia Viva’ reduced to irrelevance.

The perceived sense of being abandoned by Italy’s European partners, a hapless Commission and a European Central Bank radically different from the days of Mario Draghi initially fuelled strong anti-European Union sentiments. A correction has taken hold, with Christine Lagarde committing to ‘do whatever is necessary’, the stability pact suspended,  and strong if belated words of support from Ursula von der Leyen. Europe is now seen, if not the best of friends, as a necessary tool in addressing the emergency. Public opinion, focused on humanitarian and lifesaving actions, sees international assistance and solidarity as crucial. Less attention is being paid to the economic implications. Italy is very different from the UK in this respect, though things may change as social and unemployment problems come to the fore.

Finance minister Roberto Gualtieri has been able to mend fences and work constructively with Brussels and Frankfurt. President Sergio Mattarella is keeping a close eye on the government staying its European course and has developed a close working relationship with Giuseppe Conte, which represents the most significant development in the situation, providing a strong boost to the government. The centre-right opposition has consistently attacked the EU as the source of all evil and finds one of its main workhorses blunted by the concerted response to the emergency; it faces the conundrum of either subscribing to government policies in which it has little to no input, or continuing with all-out criticism which no longer resonates as well with public opinion. Matteo Salvini seems unable to steer away from an at times contradictory protest mode and this is reflected in a gradual levelling off of the Northern League’s consensus ratings, to the advantage of Giorgia Meloni, who has tried with some success to move the Brothers of Italy away its neo-fascist reputation.

Italy is facing its gravest crisis since the second world war and the divisions within the country have only been masked; their underlying causes have not gone away, nor has the fragility of the political system. Mattarella’s bid to form a national unity government has not been taken up by Salvini, and the president’s alliance with Conte is likely to remain impregnable as the emergency unfolds. Should things ease by June – as some believe possible – the Salvini-led opposition could renew a call for early elections and try to replace the present government with a broader based coalition and a prominent role for him. Concerted attacks to this end on Conte’s ‘incompetent handling’ of the crisis are already underway, but it remains to be seen what the reaction of a severely tested public would be.

Much depends on how long the pandemic lasts and how seriously it affects the social and economic fabric. In a relatively normal scenario, something close to the present government could muddle through until the 2022 deadline for the election of the next Italian president. If a systemic breakdown occurs, the often-mooted hypothesis of a ‘technical’ government led by someone such as Mario Draghi could regain traction. The bleak truth is that the length of the emergency, the type of  recovery and the size of the economic and social costs are all impossible to predict.

Antonio Armellini is Vice-President of the AIICP Italy-India Association and a former Italian diplomat.