Uncomfortable realities behind ECB’s dilemma over fragmentation and inflation 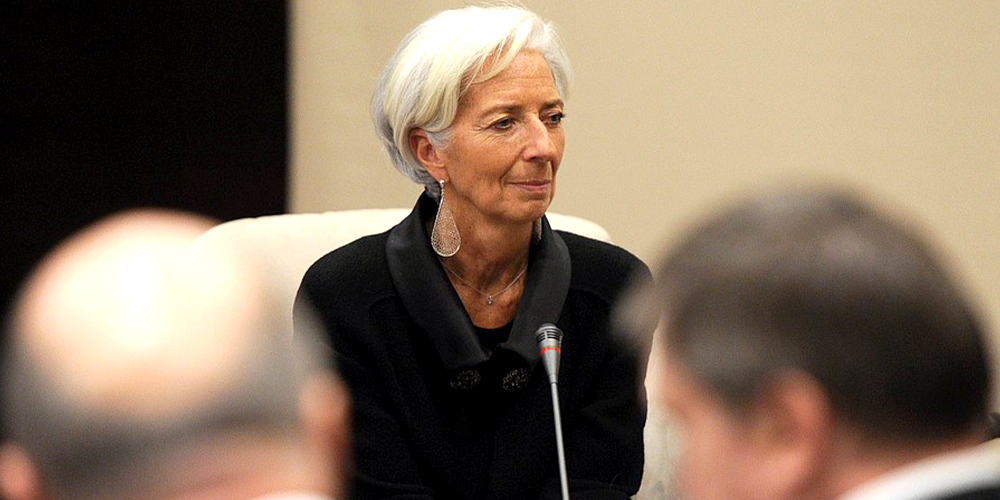 Behind the scenes, spectre of losses for central banks – and for taxpayers

The European Central Bank’s complex planning for an anti-fragmentation facility for euro area unity could backfire – by exposing rather than alleviating long-standing sources of fracture.

The ECB’s uneven communications over efforts to limit renewed bond market flare-ups and harmonise its ‘monetary transmission’ demonstrate an uncomfortable dilemma. The ECB and national central banks have been deliberating internally for at least three months a necessary fragmentation-prevention tool to accompany slow normalisation of European interest rates in response to rocketing inflation partly caused by the Russian invasion of Ukraine.

But a combination of political, legal and technical imponderables has prevented any decision. The governing council is leaning in the direction of ‘constructive ambiguity’ articulated by Joachim Nagel, the new Bundesbank chief, a jovial but plain-speaking anti-inflation activist who has adopted an ‘iron fist in velvet glove’ approach since taking over in January.

One big problem, barely noticed by the public and financial markets, is that a new ECB bond market purchase programme at a time of rising interest rates could expose euro area central banks to large losses on their balance sheets. This could represent political dynamite, especially in Germany, where the Bundesbank habitually has a sizeable (now likely to be growing) lead in citizens’ trust over the ECB, according to polling data.

Bundesbank ahead in struggle for German hearts and minds
Survey results on trust in monetary policy: Bundesbank vs European Central Bank, 2019-22 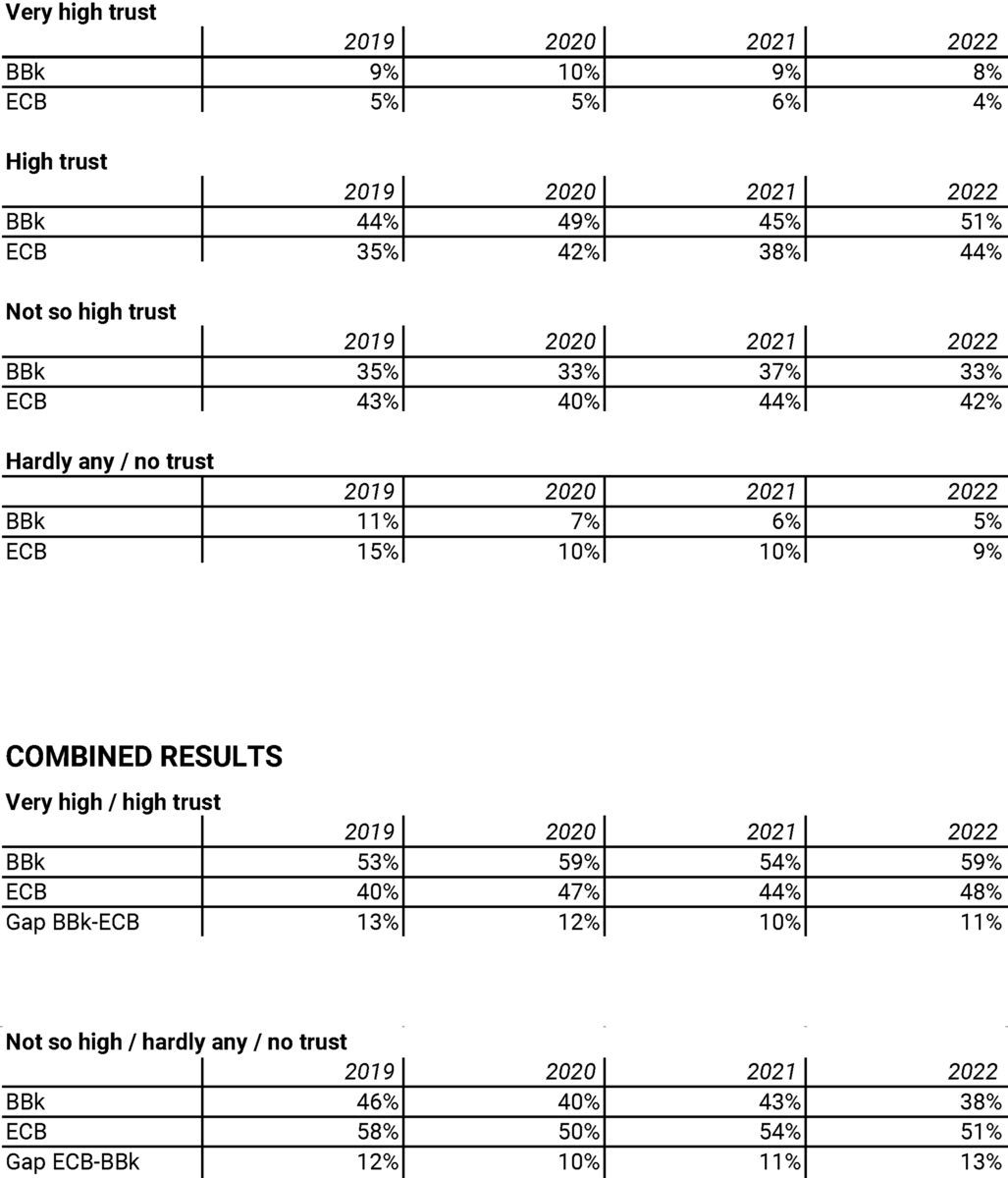 Source: forsa. Representative sample of 2000 persons in Germany aged 16+ (carried out April/May each year). Figures may not add to 100% because of differentiated answers.

In a surprisingly frank speech in November 2021, Isabel Schnabel, the German economist on the ECB board who has become a leading policy figure, emphasised the reasons for the ECB’s current ‘sequencing’ of raising interest rates (now planned for 21 July) after ending net government bond purchases (planned for the end of June). If the opposite were to occur, Schnabel said, taxpayers would be likely to suffer. ‘In raising policy rates before ending net asset purchases, central banks would be willingly accepting losses on their balance sheets that would ultimately lead to losses for the average taxpayer.’

Behind the scenes, ECB officials have been working on ‘stress testing’ the Eurosystem’s own balance sheet to assess vulnerabilities in case of rising interest rates and declining prices on its massively expanded €4.9tn portfolio of public and private sector bonds. The results of such deliberations are highly unlikely to be released to the public. There have been some low-key attempts on the governing council to draw attention to the Eurosystem’s relatively low capital backing.

So far, the ambiguity of the ECB’s current fragmentation approach seems to be working. But the ECB’s decision-making leeway is painfully narrow, not least because of political pressures building in Germany, France and Italy.

At a time when bond yields have risen sharply because of higher world-wide inflation, the gap between Italian and German 10-year yields rose to a high of more than 2.3 percentage points before an emergency ECB governing council meeting on 15 June, from lows nine months ago of 1 percentage point (which represents the Banca d‘Italia’s long-term view of ‘fair value’ for Italian bonds). But the gap has since narrowed to around 1.9 percentage points after the 15 June session reaffirmed the council’s commitment to a powerfully expostulated but undefined fragmentation effort.

ECB has crisis-fighting experience – but will words be enough?

Dextrously skimming over differences on the council over whether, how and when to act on yield spread differences, Christine Lagarde, ECB president, since March has been outlining the bank’s plentiful experience in devising crisis-fighting tools: ‘We have demonstrated that in the past; we will do so again.’ In reality, the bank faces a stark choice between two unpalatable outcomes – failing to act on 8% inflation or stoking fears of a potentially existential split between stronger and weaker euro area members. In response, the ECB seems to be following the time-honoured advice of baseball catcher-turned-cultural icon Yogi Berra: ‘When you come to a fork in the road, take it.’

At the Amsterdam press conference on 9 June after the ECB’s last scheduled policy-making meeting, Lagarde made copious references to planned interest rate increases in July and September. But she gave no details of the long-awaited fragmentation tool. Members of the council favouring tightening action, as well as those arguing for continued monetary accommodation, have been arguing for months that a tool is needed to shepherd the euro area through interest rate ‘normalisation’.

There is consensus that the new tool needs to embody much greater firepower than the technical ‘flexibility’ embedded in the ECB’s government bond reinvestment mechanisms but disagreement on how to reconcile this with strong guidelines set down over the past decade by the European court of justice and the German constitutional court. Internal technical discussions were underway well before the 15 June emergency meeting.

Failure to give details on 9 June stems partly from ECB desire to let markets find their own level. There has been expectation – partly realised in recent days – that attractively repriced Italian debt would draw in buyers because of the country’s relatively improved economic fundamentals and prospects of receiving large sums from the European Union’s Covid-19-related Next Generation facility.

But nagging belief remains that the euro area is again demonstrating a syndrome criticised by a leading US policy-maker during the sovereign debt crisis 10 years ago: ‘The Europeans like to wait until the victim is hanging over the cliff with legs in the air – and only then do they send a rope to pull him up.’

Comparisons are being drawn with the last existential euro threat in 2012, when Mario Draghi, Lagarde’s ECB predecessor, now Italian prime minister, issued his celebrated ‘whatever it takes’ dictum to hold the euro together. His July 2012 statement in London led to the ECB formulating its ‘outright monetary transactions’ programme in September setting out selective ECB bond-purchasing for countries that fulfilled EU-backed economic conditions. The OMT – described by Meghnad Desai, OMFIF advisory council chairman, as ‘a brilliant confidence trick’ – was never used.

Outside bodies such as the European shadow financial regulatory committee, as well as, in private, some ECB council members, have been calling for the OMT to be introduced for countries like Italy, backed by relatively low conditionality and potential funding from the European Stability Mechanism, the EU’s well-endowed support instrument which benefited peripheral euro countries during the debt crisis.

In some ways, the euro area is better able to withstand pressures than 10 years ago, partly because of the ground-breaking NGEU, as well as Draghi’s confidence-boosting accession as Italian prime minister in February 2021.

Back to ‘whatever it takes’? Five reasons for doubt

But there are five areas where the EU is in less good shape. First, the Covid-19 upset has demonstrated the EU’s resilience but also its vulnerability to worsened public debt figures and loss of economic activity. The ECB’s balance sheet has expanded beyond anything previously imagined, exceeding legal norms for government bond-purchasing in some cases – gravely constraining (despite policy-makers’ attempts to portray ‘no limits’ confidence) the ECB’s possibilities for future action.

Second, some of the actions being suggested for the fragmentation instrument could be highly difficult to implement. If the ECB sterilised interventions under the anti-fragmentation tool (to limit excess liquidity) it could sell German, Dutch or Austrian bonds – which would be construed as a massive fiscal transfer towards higher-indebted countries. Or if the ECB mopped up liquidity by increasing liabilities (through issuing bills/bonds or term deposits) that would be a dual route to balance sheet losses. With rising rates, absorbing liabilities becomes more costly just when the asset side is exposed to considerable mark-to-market losses.

Third, even with much lower levels of conditionality such as mere adherence to NGEU rules, introducing an OMT programme for Italy would be politically explosive. This would further raise the already high chances that Draghi and other technocrats will be ousted in a return-to-populism government after general elections early in 2023. The new ESM treaty (allowing use of ESM funds as a backstop for banking resolution) has not been ratified by either Germany or Italy. Since the old one is still in force, this does not technically impede using the OMT in any new exercise, but it is a  political hurdle. Additionally, every ESM disbursement needs Bundestag approval – unacceptable to Rome. (Under one variant of an OMT solution, dubbed ‘OMT-light’, the ESM would make no disbursements. This would lower the ‘stigma’ of a country like Italy receiving money from the ESM, whose role would be limited to approving, in co-operation with the European Commission, a package of economic discipline and reforms.)

Fourth, the German constitutional court set tough binding rules, drawing substantially on ECJ findings, in a landmark June 2016 OMT judgment. These form a framework for Bundesbank participation in any anti-fragmentation programme. In the new rising interest rate environment, one chilling reference to balance sheet losses is of vital importance. ‘Purchases of government bonds by the Eurosystem may lead to expenditures or losses of revenue that are relevant for the budget… The volume of bonds issued by the member states that could currently be covered by the OMT programme is such that the Bundesbank’s share in them would exceed its capital and its relevant provisions many times over. Even a partial default of the bonds would not only limit the net profit transferred to the [government]…  but could also lead to negative [Bundesbank] equity… This could… undermine confidence in the capacity of the German Bundesbank… The same holds true for the European Central Bank, the loss allocation of which is governed merely by the rule that losses can be compensated for with funds from the general reserve fund and from monetary income… However, there is no provision on compensating losses that exceed those funds.’

Fifth, the changed political landscape is a headache. Christian Lindner, Germany’s new Free Democrat finance minister, will take a much less compliant line on fragmentation than Olaf Scholz, former Social Democrat finance minister and now chancellor. Lindner has been playing down the significance of this year’s rise in Italian spreads. The reason why Germany has not ratified the remodelled ESM treaty is because deputies from the FDP – then in opposition – including Katja Hessel, now a parliamentary state secretary under Lindner – were in the group that last year launched a lawsuit at the constitutional court preventing the German president from signing the treaty into law. In view of French President Emmanuel Macron’s setback in the 19 June parliamentary election, Draghi’s looming departure and Scholz’s coalition difficulties, European politics are fraught with risks – a constellation that ECB technocrats are powerless to influence.