Lamont: Fighting inflation like ‘balancing bubbles on a pin’ 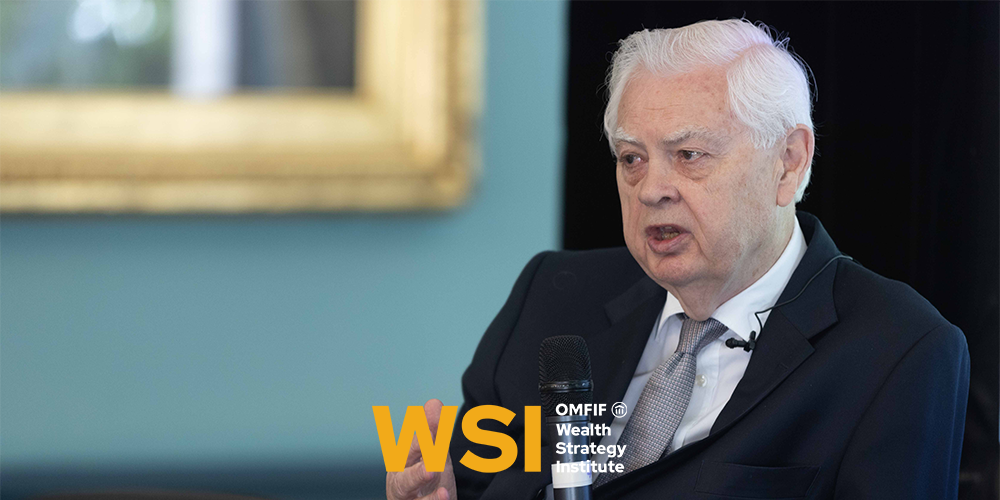 Lord Lamont of Lerwick knows a thing or two about double digit inflation. Speaking at the opening session of OMFIF’s Global Wealth Strategy Summit in June, he recalled that when he became chancellor of the exchequer in November 1990, inflation in the UK stood at 10.6%. This is just below the 11% level the Bank of England is expecting by October.

A clear difference between 2022 and 1990 is that when Norman Lamont became chancellor, the Bank of England’s base rate was 14%. Today’s rate remains deeply negative in real terms. Small wonder that Lamont was able to offer no soothing advice on how the challenge of inflation can be addressed without pain. His prescription for reducing inflation, famously articulated in May 1991, was rising unemployment and a recession. ‘It was a rough and harsh way of dealing with inflation, which was similar in its mechanism to what Volcker did in the US in the 1980s,’ he said.

That may send shivers down the spines of those who remember the sky high federal funds rates of the early 1980s. ‘I don’t think anybody wants deliberately to engineer a recession,’ said Lamont. ‘But what you can’t do is abolish the cycle. It’s difficult if not impossible to stimulate an economy and reduce inflation at the same time. It’s like balancing bubbles on a pin.’

Central banks must shoulder much of the responsibility for the monetary policy conundrums they face today. Lamont acknowledged that much of the UK’s inflation has been driven by external forces, but probably not as much as the Bank’s apologists might claim. ‘We must recognise that the core rate of inflation excluding energy costs and food is three times the Bank of England’s inflation target,’ he said.

This suggests that the Bank has spent too long dozing at the monetary policy wheel. ‘I was an advocate last year of putting up rates,’ said Lamont. ‘I think central banks everywhere have been somewhat complacent about this.’

It suggests, too, that central banks may have had too much faith in the power of guidance to steer inflation. Lamont recalled that he introduced inflation targeting some years before the Bank of England was made independent. ‘To be honest, I always had my reservations about inflation targeting because of its essentially backward-looking nature,’ he said. ‘One of the add-ons designed to deal with this has been forward guidance and the management of expectations. I think central banks have almost convinced themselves too much that inflation is a phenomenon merely of expectations and that their words control inflation. This is what [former Bank of England Governor] Mervyn King has called the Canute theory of monetary policy.’

Extending the discussion to the outlook for the global economy, speakers at the summit echoed many of the dispiriting forecasts for the UK, where the Organisation for Economic Co-operation and Development is now expecting zero growth in 2023. This will make it the slowest growing economy in the G7 next year. But global growth is expected to be markedly weaker in 2023 in almost all countries, according to the OECD.

Sir Vince Cable, who served as the UK’s secretary of state for business, innovation and skills between 2010-15, commented that the world’s largest economic regions are each at different stages of the inflation-interest rate cycle. Several face the risk of secular stagnation driven by weak private investment. ‘Bank lending is not growing in the US in real terms, and it’s falling in real terms quite strongly in the euro area, particularly in southern Europe,’ he said.

He added that recessionary pressures across a number of economies will exert pressure on governments to fend off rising unemployment by upping public spending. This will in turn lead to concerns about rising government debt. ‘Japan has shown that you can keep this going more or less indefinitely if you have local lenders,’ said Cable. ‘But countries like the UK have to rely on the kindness of strangers. There are potentially serious risks if governments take too many liberties with the public debt.’

A longer-term threat generated by recent economic and political dislocations may be the accelerated demise of globalisation. ‘I detect that in the UK government there is a move away from open markets towards more state intervention in industry,’ said Lamont. ‘There is growing nervousness about globalisation. People are worried about the security of supply chains and there is more hostility towards foreign takeovers.’

Lamont was joined by other speakers in identifying this as a backwards step for the UK economy, arguing that exposure to market forces and stronger international competition is a prerequisite for higher productivity.

This may matter less than some economists believe. The chairman of OMFIF’s advisory council, Lord Meghnad Desai, said that globalisation is only necessary for as long as regional specialisation exists. ‘Globalisation is needed only when you have raw materials located in one place and factories in another,’ he said. ‘Increasingly, globalisation may only be economically necessary for passenger travel.’