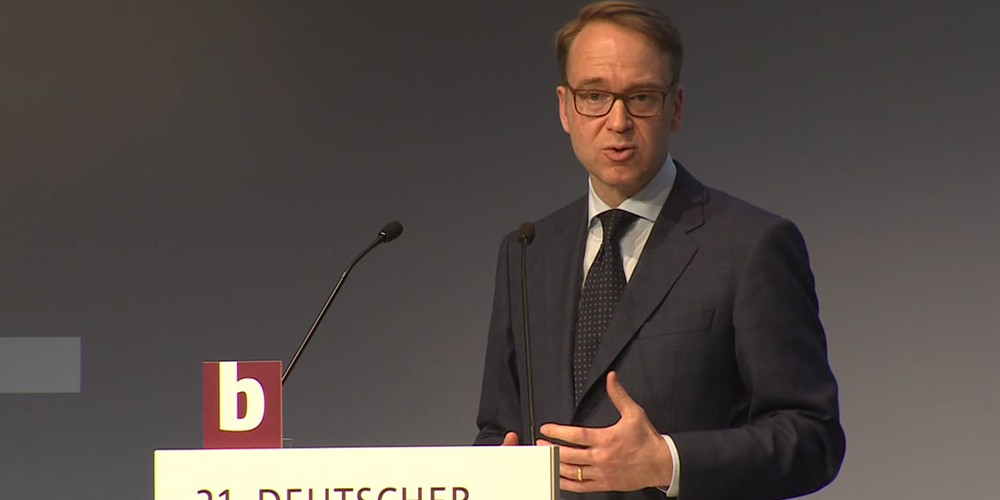 Jens Weidmann will metamorphose into an improbable defender of government bond purchases when the Bundesbank president addresses a Berlin parliamentary committee on 17 June to help resolve the constitutional wrangle over Europe’s quantitative easing.

Underlining the surreality of the political and financial tussle, Weidmann will support a central bank policy he has never advocated to protect the ECB from the depredations of a court it does not recognise.

The process, accompanied by intense diplomatic manoeuvring among the French, Italian and German governments as well as the Bundesbank and ECB, is likely to result in greater German parliamentary scrutiny of future ECB activities.

The Karlsruhe court last month threatened to ban the Bundesbank from participation in the five-year-old public sector purchase programme unless the ECB provides a ‘proportionality assessment’ on costs and benefits of its €2.2tn of bond purchases.

The exact conditions for fulfilling the court’s strictures are still in doubt. Legal experts are squabbling over the meaning of Karlsruhe’s demand that the Bundestag and German government should take steps to procure an ECB council ‘decision’ showing it considers all effects of its policies.

Financial market uncertainty will remain over the validity and durability of the PSPP and its sister programme, the €1.35tn pandemic emergency purchase programme, unveiled in March and reinforced on 4 June to combat the coronavirus-fuelled recession.

‘We will bring about a compromise that saves everyone’s face, upholds the ECB’s independence and shows there has been enough consideration of the [PSPP] effects,’ according to a leading EU committee member. ‘In future the ECB will have to document more openly the effects of its actions. Extra transparency is good for democracy.’

In contrast to general irritated truculence after the 5 May verdict, all sides are now working on a speedy compromise to avoid major upsets when Europe is crafting its response to the Covid-19 upheavals.

In his hour-long session on 17 June, Weidmann will make a short statement on the effects of the economic shutdown and then rapidly answer 18 questions on the Karlsruhe judgment from members of parliament. If asked, he will affirm he is speaking for the Bundesbank and as one member of the 25-person ECB council rather than institutionally on behalf of the ECB. This may intensify doubts about whether the committee is addressing the right witness to satisfy Karlsruhe’s queries over the constitutional legality of ECB measures.

Christine Lagarde, the ECB president, has repeatedly said the central bank recognises the jurisdiction only of the European court of justice, which formally backed the PSPP, subject to quantitative operational limits, in December 2018. Following telephone calls with Olaf Scholz, the German finance minister, and Wolfgang Schäuble, his predecessor, a former Lagarde ally, now Bundestag president, Lagarde in recent weeks has taken a much more conciliatory approach to producing a solution. This includes emollient statements to the European parliament on 8 June.

An important factor is believed to be behind-the-scenes French and Italian advice to Lagarde to sidestep confrontation with Berlin and Karlsruhe. A compromise over the court’s demands is viewed as essential to safeguard more general crisis-fighting efforts including the €750bn EU recovery fund which faces hurdles winning unanimous agreement from all 27 member states.

On 17 June, Weidmann will need to show verbal dexterity to explain how the PSPP meets ‘proportionality’ tests even though he has near-constantly refused to back it. When Mario Draghi, Lagarde’s predecessor, launched the programme in January 2015 (seen then as €1.1tn lasting for just 18 months), Weidmann conspicuously failed to give support, mirroring general German scepticism including from Chancellor Angela Merkel and Schäuble as finance minister. Lagarde, then International Monetary Fund managing director, gave it a fulsome welcome.

Weidmann has made clear that, if the court is not satisfied with ECB arguments, the Bundesbank would have no choice but to withdraw from the PSPP – which could spell the beginning of the end of monetary union. One big stumbling block is that the ECB is still far from postulating an ‘exit strategy’ either for the PSPP, as laid down by Karlsruhe, or for the PEPP. Officials and parliamentarians view as near-certain further German lawsuits against both the PSPP and PEPP in coming months.

Schäuble and leading parliamentarians are considering bringing the Karlsruhe imbroglio to a Bundestag plenary debate in the final week before the summer recess starting on 3 July. Bundestag debate over ECB action, once a rarity, will now become a fuller part of the European political process.