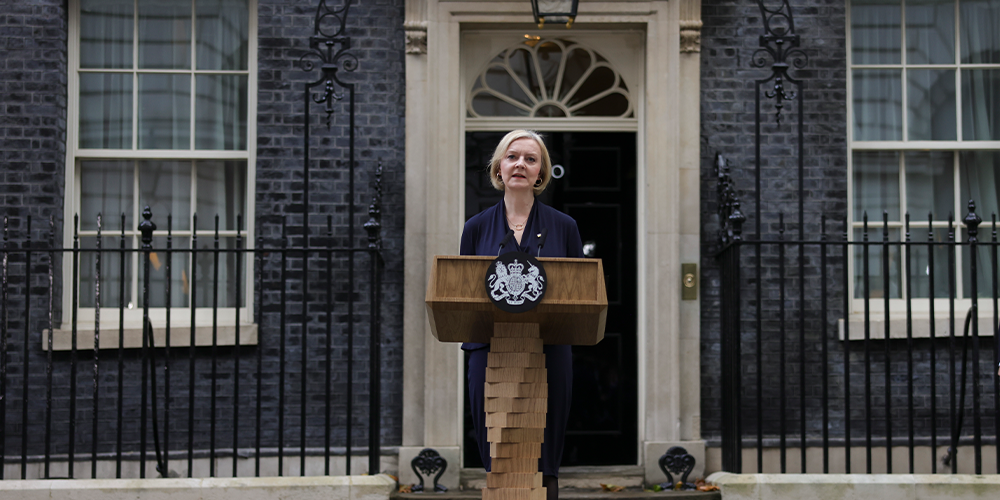 Some might call this poetic justice. Others, a tragicomic British economic muddle. The UK government’s policy mistakes will require more severe macroeconomic tightening than would have otherwise been necessary before the ill-fated 23 September budgetary measures, according to Nick Macpherson, a well-regarded former head of the UK Treasury.

Macpherson, in a lecture in Edinburgh on 1 November, delivered in diplomatically assertive language a harsh judgement on Liz Truss and Kwasi Kwarteng, respectively the former UK prime minister and chancellor of the exchequer.

In possibly the most stringent tones adopted in modern times by a former civil servant against a recently departed prime minister, Macpherson said Truss had taken aim against the Treasury as ‘an easy target’. This was part of an effort by the Conservative party, even after it had been in power for over 12 years, to seek ‘new dragons to slay to explain why it has yet to build a new Jerusalem’.

At the Conservative party conference on 5 October – just a fortnight before she resigned as prime minister – Truss appeared to associate the Treasury with an alleged ‘anti-growth’ coalition she blamed for slowing Britain’s economic dynamism.

Macpherson, now a member of the House of Lords, said the Truss government initially chose to define itself by its fight against ‘failed Treasury orthodoxy’. But, following the departures of Truss and Kwarteng and multiple U-turns over tax and spending, Treasury orthodoxy now appears to be back ‘with a vengeance’.

Macpherson was Treasury permanent secretary in 2005-16 under three chancellors, one of the longest spells of service since the post was established in the 1860s. He unleashed a powerful broadside against Truss’s quixotic decision – thought to reflect above all personal pique – to order Kwarteng, on her first day in office on 6 September, to sack Macpherson’s ‘internationally respected’ permanent secretary successor, Tom Scholar.

Macpherson’s message, couched more in sorrow than in anger, was that British government incompetence would exert an overall negative effect on the UK economy because of the need to recover credibility on international financial markets. This was precisely the opposite outcome to that planned under Truss’s now repudiated ‘go for growth’ approach.

The fall-out from Truss and Kwarteng has now been partly reversed through the accession of Rishi Sunak and Jeremy Hunt as prime minister and chancellor, Macpherson said. Yet, in his talk on ‘Treasury orthodoxy – fact or fiction’, part of the King’s College London Strand Group lecture series, he emphasised that September’s errors would exact a long-term cost.

Yields on 10-year government bonds have returned to around 3.5%, the level before the government’s largely reversed 23 September tax cuts. But Macpherson confirmed the financial market verdict that the UK was effectively paying a premium on its debt because of continuing policy uncertainties.

Answering questions, Macpherson described it as ‘a pity’ that policy was now being tightened ‘more than necessary than if [the ‘mini-budget’] had never taken place.’ In the audience at the lecture, held in partnership with the University of Edinburgh Business School and the City of London corporation, were Alistair Darling, a former Labour chancellor, and Simon Case, present UK cabinet secretary.

Macpherson pointed to the Truss government’s shortcomings in understanding international monetary realities. Unlike the US, Britain did not possess an important reserve currency. America could draw in international funds at will, but ‘no one has to fund Britain’s deficit.’

The next stage in the government’s rude awakening will come on 3 November when the Bank of England unveils a new rise in interest rates to quell inflation.

Although Macpherson admitted this was a cliché, he said credibility – ‘hard won and easily lost’ – took time to win back. Politicians like Truss had to learn to ‘count’. Otherwise, he said, ‘markets will turn against you.’

He said the ‘disaster’ of the September measures was ‘etched into the collective consciousness of the Treasury’. It ranked along with post-second world war British monetary mishaps including the 1967 sterling devaluation, Britain’s 1976 recourse to the International Monetary Fund, the 1992 retreat from the exchange rate mechanism and the 2008 financial crisis.

Macpherson adhered to a courteous tradition of civil service neutrality. Yet he acknowledged a supreme irony: the former prime minister’s campaign against the Treasury and the Bank of England has strengthened both institutions to the extent that they might need now some constraints to curb their overweening influence. There was a danger, he said, of handing over too much power to ‘unelected technocrats’. He added: ‘If I was in Whitehall now, I would be encouraging people to step back a bit and think how could monetary and fiscal policy be coordinated.’

Macpherson’s lecture covered the Treasury as an 800-year-old institution, delving into the historical record of past prime ministers and chancellors. He admitted the Treasury had frequently made mistakes and could somehow be blamed for overcaution. But he summed up the Treasury’s function according to John Maynard Keynes as being an ‘essential bulwark against overwhelming wickedness’. Or, in the words of legendary 1960s and 1970s Treasury official Leo Pliatzky, ‘The Treasury stands for reality.’

Read the transcript of the speech here.