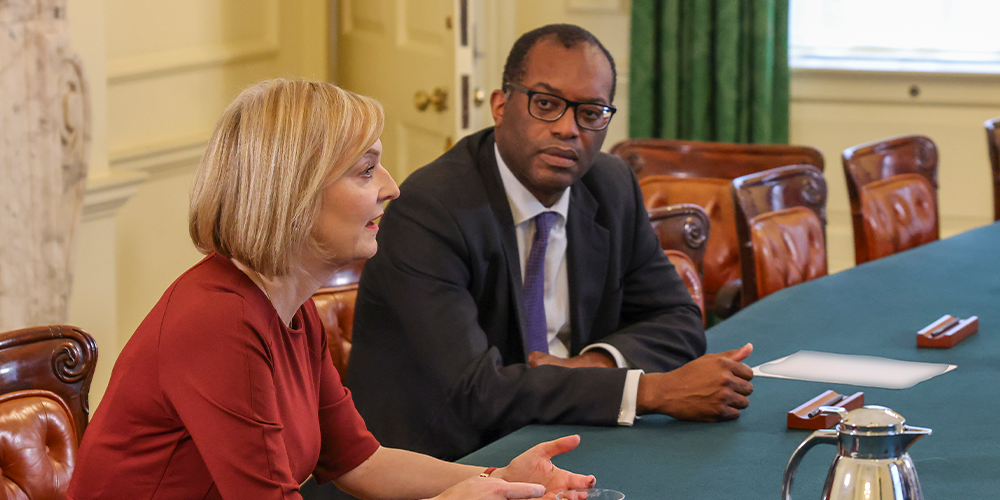 The collapse of the UK government’s reputation for economic competence has repercussions spreading well beyond the domestic sphere. Diminished British standing on the world stage will weaken UK authority in the G7 array of industrialised countries at a crucial time, particularly over the war in Ukraine.

British policy has become a subject for amusement and disdain in international meetings. The outpouring of criticism in the last 10 days, including from US and European finance ministries and central banks, has been unprecedented. Kwasi Kwarteng, Liz Truss’s embattled chancellor of the exchequer, has become the focus of jokes in at least one public central banking speech.

The UK prime minister has admitted mistakes over the 23 September announcement of unfunded tax cuts and spending increases to bolster the economy. The measures provoked sharp falls in sterling and government bonds, partly corrected by emergency Bank of England action. After Truss showed defiance on 2 October over possible changes, and declared apparent openness to public services spending cuts, Kwarteng announced on 3 October a key policy reversal. By scrapping plans to eliminate the top rate of tax on high earners, heading off a revolt by Conservative MPs, Truss has faced up to reality. But the U-turn is likely to compound complaints over policy shortcomings within her own party as well as from further afield.

New factors undermining the UK’s political and economic position, already weakened by the clumsy handling of European Union withdrawal under Boris Johnson’s chaotic prime ministership, could impede global co-operation in key areas. These include maintaining western unity over Ukraine – also likely to be affected by government change in Italy – as well as international action for hard-pressed emerging market economies and policies on climate change.

These question marks over the UK will reduce Truss’s ability to influence gatherings such as the new ‘European political community’ grouping masterminded by Emmanuel Macron, the French president, meeting in Prague on 6 October. This assembles EU members and neighbouring countries including the UK, Ukraine, Moldova and Balkan states.

According to one authoritative UK politician, the unrest over Truss’s economic plans is worse than the tumult over Britain’s exit from the exchange rate mechanism of the European Monetary System 30 years ago. This is because present circumstances are likely to bring higher interest rates and lower growth. ERM departure, by contrast, freed the UK from interest rate constraints and paved the way for higher growth.

Even when Britain was taking a different line on European monetary and fiscal policies over 1990-2010, British representatives attracted considerable respect in worldwide policy circles. Diverse British chancellors of the exchequer, ranging from Geoffrey Howe, Nigel Lawson, Norman Lamont and Ken Clarke to Gordon Brown and Alistair Darling, built international credibility. Howe, Tory Prime Minister Margaret Thatcher’s first chancellor, coined the phrase ‘authority of success’ for Karl Otto Pöhl, Germany’s widely esteemed central bank president. The epithet is unlikely to apply to Kwarteng. Ominously for her chancellor, in a BBC interview on 2 October, Truss appeared to be blaming Kwarteng for the now-rescinded scrapping of the top tax rate, which she admitted had not been discussed by the full cabinet.

Last week’s unusual public criticism of Britain’s tax cut plans by the International Monetary Fund was notable both for the strength of the language and for confirmation that public attacks on the UK are now part of common practice. Parallels between Britain and emerging market economies drawn by Lawrence Summers, former US Treasury secretary, have become a standard feature of the international policy-making vocabulary.

This could have several consequences. In the short term, the assault from abroad may strengthen the resolve of Truss and her supporters to rail against UK ‘Treasury orthodoxy’. Truss appears to overlook that ‘orthodoxy’ stands as a proxy for sound fiscal and monetary rules which formed the bedrock of her admired predecessor Thatcher. Departure from these norms is likely to lead to detract from, not improve, conditions for inclusive growth.

Global doubts about UK prospects – highlighted by Standard & Poor’s placing its AA-rating on negative outlook – will not increase foreigners’ confidence in holding UK government debt. This is likely to raise borrowing costs and dampen the short- and medium-term economic outlook. In her BBC TV interview on 2 October, Truss seemed to place responsibility onto the Bank of England for increases in interest rates. She displayed either genuine or pretended ignorance about the government’s responsibility in these matters. Truss’s combination of insouciance and stridency, accompanied by the U-turn over tax, does not bode well for a prime minister still in her first month in office.