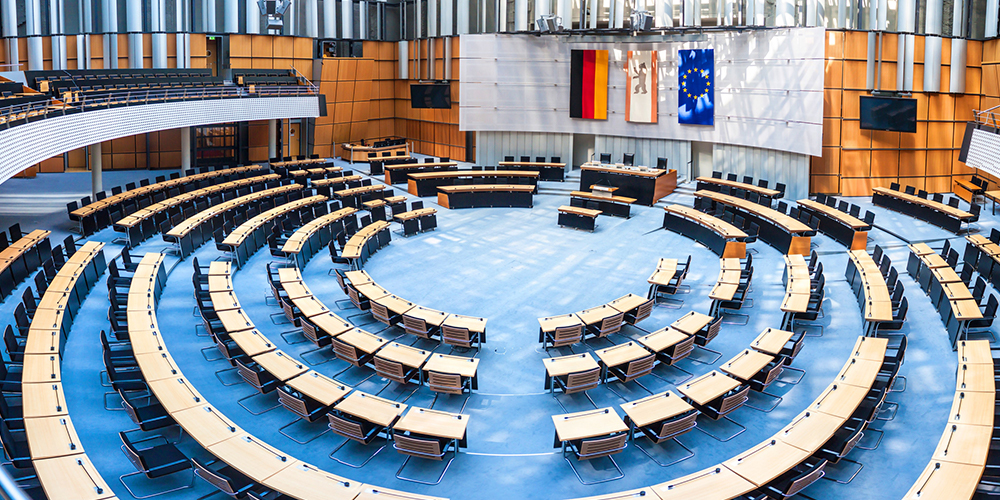 Germany will form a pro-European centrist government with stronger spending and investment policies to fight climate change and near-certain participation of the Greens in a novel three-cornered coalition after inconclusive elections on 26 September.

German political fragmentation, intensified by retirement of Angela Merkel after 16 years as chancellor, coupled with heavy losses for her Christian Democratic Union, has important implications for European policies. The next German chancellor, depending on complex negotiations in coming weeks, will be either Armin Laschet, heading the conservative grouping of the CDU and its Bavarian Christian Social Union partners, or Olaf Scholz, Social Democrat (SPD) finance minister under Merkel. Laschet – shrugging off heavy CDU/CSU losses – appeared a more confident chancellor-in-waiting than Scholz in post-polling evening TV encounters.

For the first time in six decades, Germany’s leader will be an equal partner not only with the French president but also with the Italian prime minister. The traditional Franco-German axis is likely to turn into a Berlin-Paris-Rome triangle – a constellation that could speed up a shift to monetary tightening by the European Central Bank.

For the first time since the second world war, five significant political groupings will be present in the next Bundestag with more than 10% of the votes, comprising the CDU/CSU, SPD, Greens, liberal Free Democratic Party and far-Right Alternative for Germany (AfD). Despite this fragmentation, early signs are that coalition bargaining will be much quicker and energetic than after the last election in 2017, when Merkel formed a new government five and a half months after the vote.

Early estimates gave the SPD a marginal lead over the CDU/CSU, each with around 24% to 25% of the vote. The CDU/CSU suffered its worst result in history, down more than eight percentage points from the last general election in 2017. Scholz succeeded in lifting the SPD by around five points compared with 2017, when it recorded its lowest federal score ever.

However, consolations for Laschet – who has struggled since he won closely-fought leadership battles in the past nine months – are that he forced the Greens into third place and closed recent weeks’ large opinion poll gaps with the SPD. Laschet – benefiting from combative support from Markus Söder, the Bavarian CSU leader and previous rival for the conservative candidature – was on more lively post-election TV form than Scholz.

Scholz, hinting at future rifts in the SPD, where he is at odds with the party’s left wing, appeared deflated by not turning latest opinion poll gains into a better election margin. Scholz could suffer the fate faced three times (in 1969, 1976 and 1980) by the CDU/CSU – of building the strongest Bundestag party presence, but going into opposition because of better coalition arithmetic for then-SPD Chancellors Willy Brandt and Helmut Schmidt.

Christian Lindner, the FDP chairman, will play a pivotal role in coalition talks. His importance has been increased by clear election losses for the far-left Linke, depriving the SPD and Greens of a potential ally in coalition horse-trading. Lindner has close personal links with both Laschet and Robert Habeck, the joint Greens chairman together with Annalena Baerbock, the Greens’ chancellor-candidate, who finished weakened despite large gains since 2017.

Both Lindner and Laschet, in initial post-election commentaries, gave strong support to a post-election alliance, raising the likelihood of a so-called ‘Jamaica’ coalition linking the CDU/CSU, Greens and FDP. Laschet hinted strongly at the feasibility of a ‘coalition of the future’ with the Greens.

This would depend on the Greens and FDP building joint positions in areas of divergence like budgetary, investment and industrial policies, intensifying existing common ground over Europe and fusing climate change policies linking the Greens’ strategic vision with the FDP’s market-orientated polices.

The other principal possibility would be a ‘traffic light’ coalition under Scholz’s leadership coupled with the Greens and FDP. However, Lindner underlined his strongest preference would be to join the CDU/CSU and not the SPD. He offered an olive branch to the Greens by hinting at direct Greens-FDP soundings ahead of formal coalition talks and declaring that the next German government would switch to much more ecological policies.

Combined with a likely tilt to fiscal expansion in Berlin, the election result could help the ECB to normalise post-pandemic monetary policy faster than expected. Europe’s inflation rate can be expected to reach the ECB’s 2% target relatively quickly over the next two to three years.

For years the ECB has overestimated future inflation. Now, however, its current warnings that more time is needed to reach 2% clearly underestimate inflationary trends. Much depends on the overall political climate. Mario Draghi, prime minister in Rome since February, has been leading Italy through the latter part of the Covid-19 crisis with a steady hand. The former ECB president is laying the groundwork for efficient distribution of the first tranches of the €200bn-plus to be allocated to Italy out of the €750bn European reconstruction fund. The optimal outcome would be for Draghi to remain prime minister until the beginning of 2023 and then become president. If all goes well, Italy may be on the way to a golden ‘Draghi decade’ of increased productivity, revitalised investment and accelerated growth.

In France, the presidential election is due in April 2022. If the overall European constellation remains stable, this will help President Emmanuel Macron to prevail against right-wing populist Marine Le Pen. This would further consolidate the Paris-Berlin-Rome triangle. The triumvirate could usher in a more productive European economic policy, with a qualitatively improved fiscal approach that would, very helpfully, take pressure off the ECB’s over-strained role as Europe’s principal stabilising force.

For a German version of this article see Germany’s business daily Handelsblatt.