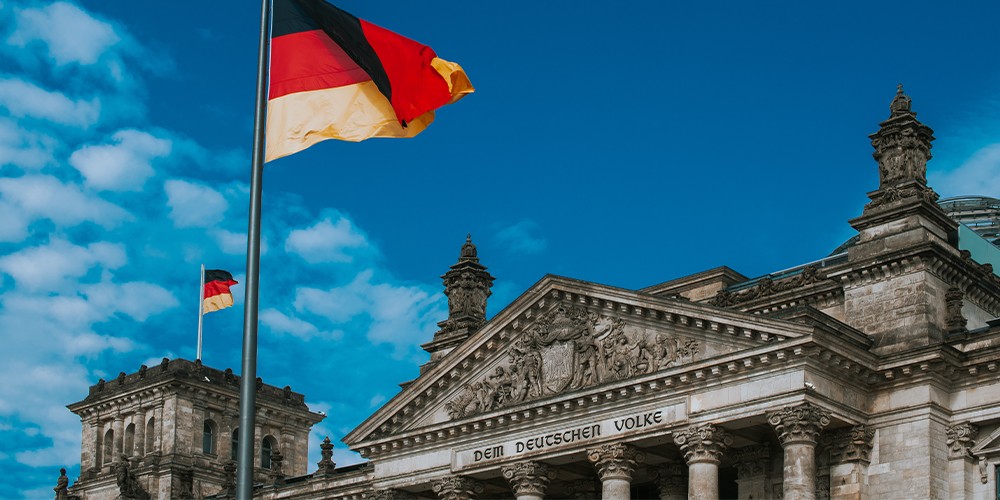 Germany’s Green party seems likely to benefit most from squabbling over Chancellor Angela Merkel’s succession among ruling conservative parties – with far-reaching consequences for Europe, including the European Central Bank’s monetary and climate policies.

Armin Laschet, head of Merkel’s Christian Democratic Union, has made up ground over his rival Markus Söder, chairman of the sister Bavarian Christian Social Union, in the struggle to lead the CDU/CSU in the 26 September general election.  But if the impasse continues, Bavarian Prime Minister Söder – smart-talking, opportunistic and (for now) popular across Germany – is likely to see his credentials enhanced over Laschet’s, the somewhat bumbling North Rhine Westphalia prime minister.

The Greens, running second in opinion polls behind the CDU/CSU, look set to be king makers in September, exerting significance influence over German and European economic policies via Berlin’s convoluted coalition politics. They are heading for by far the party’s most successful showing since it was formed in West Germany in 1980.

The Greens’ chancellor-candidate, to be declared on 19 April, appears set to be Annalena Baerbock, a 40-year-old foreign policy and security expert who studied political science and public law at Hamburg university and was also at the London School of Economics.

She seems to have the edge over her co-chairman Robert Habeck, a minister in the Schleswig-Holstein state government. The Greens will highlight this relatively uncontroversial leadership decision as a contrast to CDU/CSU bloodletting. The possibility of Germany’s youngest ever (female) chancellor could herald dramatic change in Germany’s political landscape, where the CDU has held power for more than 50 years of the post-war republic’s 72-year history.

Barely noticed by the outside world, the Greens espouse radical policies to forge a ‘Federated European Republic’, strengthen the euro – including in a digital version – as an instrument of ‘European sovereignty’ and turn the currency into a centrepiece of international climate investment.

Söder might be the more attractive candidate to lead the conservatives in the autumn poll. But he would probably have more difficulty than his amiable, middle-of-the-road and heavily pro-European rival Laschet in forging common cause with the Greens as the CDU/CSU’s most likely coalition partner.

Although he has since shifted policies in a much more liberal European direction, Söder, as Bavarian finance minister in 2011-18, was notable in opposing Mario Draghi’s easy money policies. One of Söder’s principal Bavarian lieutenants labelled the then ECB president (now Italian prime minister), as a ‘currency counterfeiter’. At the height of the Greek debt crisis, Söder advised Greece to return to the drachma, saying this was tantamount to an adolescent leaving home: ‘Sooner or later you have to move away from Mama.’

Green-conservative antipathy could pose a major impediment to post-September coalition-building. It could provoke the alternative of a so-called ‘traffic light coalition’ between the Greens, the Social Democratic party (SPD) and the liberal Free Democrats under Baerbock’s chancellorship.  Whatever happens, the September poll is likely to unleash months of uncertainty while European recovers from the pandemic, well behind the US and China, and France is preparing for April 2022 elections in which President Emmanuel Macron faces a major far-right threat.

The Greens’ election manifesto, which has to be approved by members later this summer, foresees a massive sweep of heavily pro-European measures. Some of these would be toned down in coalition bargaining, but many in the party’s rank-and-file will be reluctant to abandon core shibboleths. The policies extend from lowering carbon emissions and promoting ‘green’ innovation, social, environmental, energy and food policies to clamping down on money laundering and introducing cross-border digital, plastics and financial transaction taxes. Other far-reaching ideas, which are unlikely to find favour with many German conservatives, include underpinning economic and monetary union with a common European fiscal policy, a European monetary fund, reforming the stability and growth pact and agreeing a euro-wide bank deposit insurance scheme – all reforms which have eluded Olaf Scholz, the pro-European SPD finance minister in Merkel’s faltering Berlin coalition.

Growing unrest in the CDU and doubts over Germany’s post-election direction will overshadow the ECB’s monetary easing, where important decisions are expected in September over prolonging the €1.85tn emergency pandemic purchase programme. Laschet’s standing has been hampered by a disastrous CDU showing in state elections on 14 March, as well as an only lukewarm endorsement by party delegates at the leadership election in January. Merkel and her allies have been punished by the electorate for Germany’s handling of the Covid-19 crisis, especially over sluggish vaccination progress, and for well-publicised misdemeanours by conservative parliamentarians, many of which are related to dubious pandemic procurement deals (Fig1). 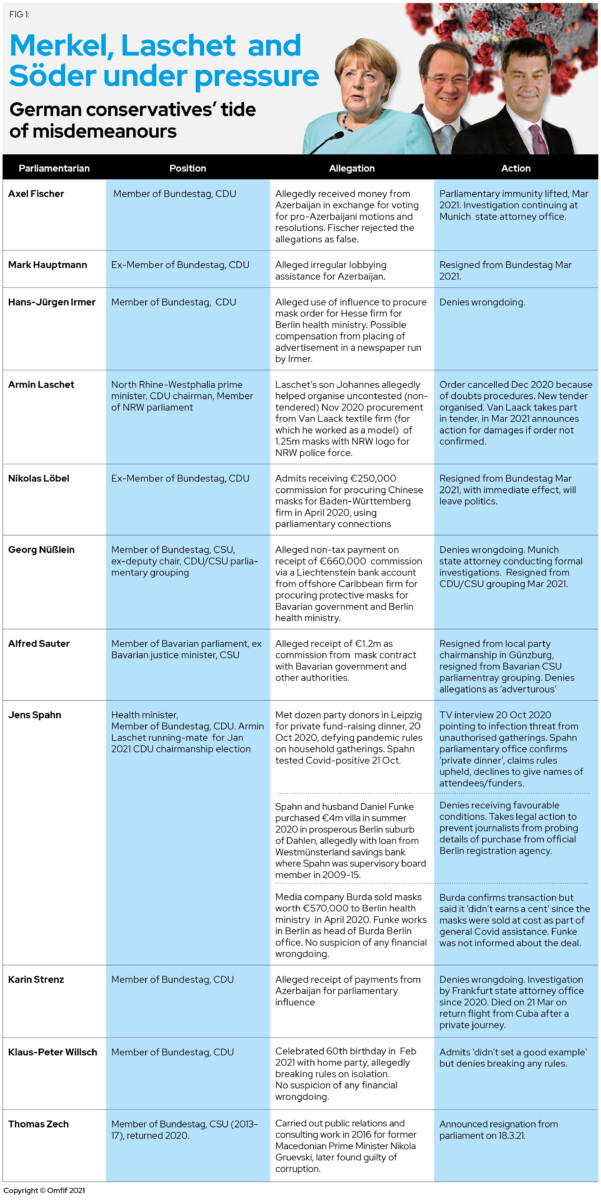