Who will fill Europe’s post-Merkel vacuum? 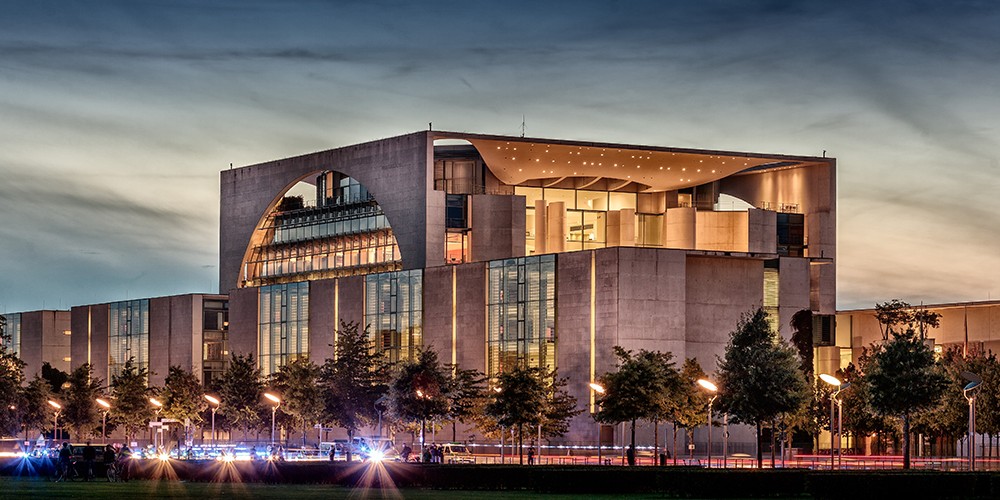 Those are just two of the complex possible outcomes of the 16 January vote to select the new leader of the conservative Christian Democratic Union, the pivotal party in Germany and probably Europe. The digital chairmanship poll among 1,001 party functionaries and elected politicians will be key to Germany’s future once Merkel steps down after 16 years as chancellor in the months following the 26 September general election.

Saturday’s CDU poll is significant for Germany’s post-Covid economy, Europe’s US and China relations, the scope of the European Union’s recovery fund and green energy prowess, and the timing of European Central Bank policy-tightening.

After ascending improbably in the early 2000s after Helmut Kohl’s and Gerhard Schröder’s 16- and seven-year chancellorships, Merkel weathered recessions, geopolitical conflicts, financial crises and now the Covid-19 upheaval. Her stamina, ruthlessness and esteem are not in doubt. In her 16-year reign she will have coexisted with 12 US, French and German presidents and 19 British, French and Italian prime ministers – as well as 11 party chairs from the luckless Social Democrats, who have been in unhappy (though generally effective) coalitions for 12 of those years.

The uncomfortable legacy of her dominance, especially her success in quelling CDU rivals, is a failed succession plan and fractured party. One figure who may emerge strengthened from the skirmishes is not even on the ballot sheet — Söder, leader of the Christian Social Union, the CDU’s smaller Bavarian sister party, is prime minister in the southern German state that owes much of its grandeur to an alliance with Napoleon inaugurating the Bavarian monarchy in 1806.

None of the three candidates formally standing – Merz, Armin Laschet and Norbert Röttgen (see Figure 1), representing broadly the economic, European and modernist sections of the party – currently has the stature or adequate support to fill the Merkel leadership vacuum. Depending on different scenarios (see Figure 2), the CDU/CSU may decide in early summer to nominate Söder as their candidate for the September election, capitalising on the Bavarian leader’s cold-blooded charisma and popular appeal stemming from Bavaria’s muscular Covid-19 response. 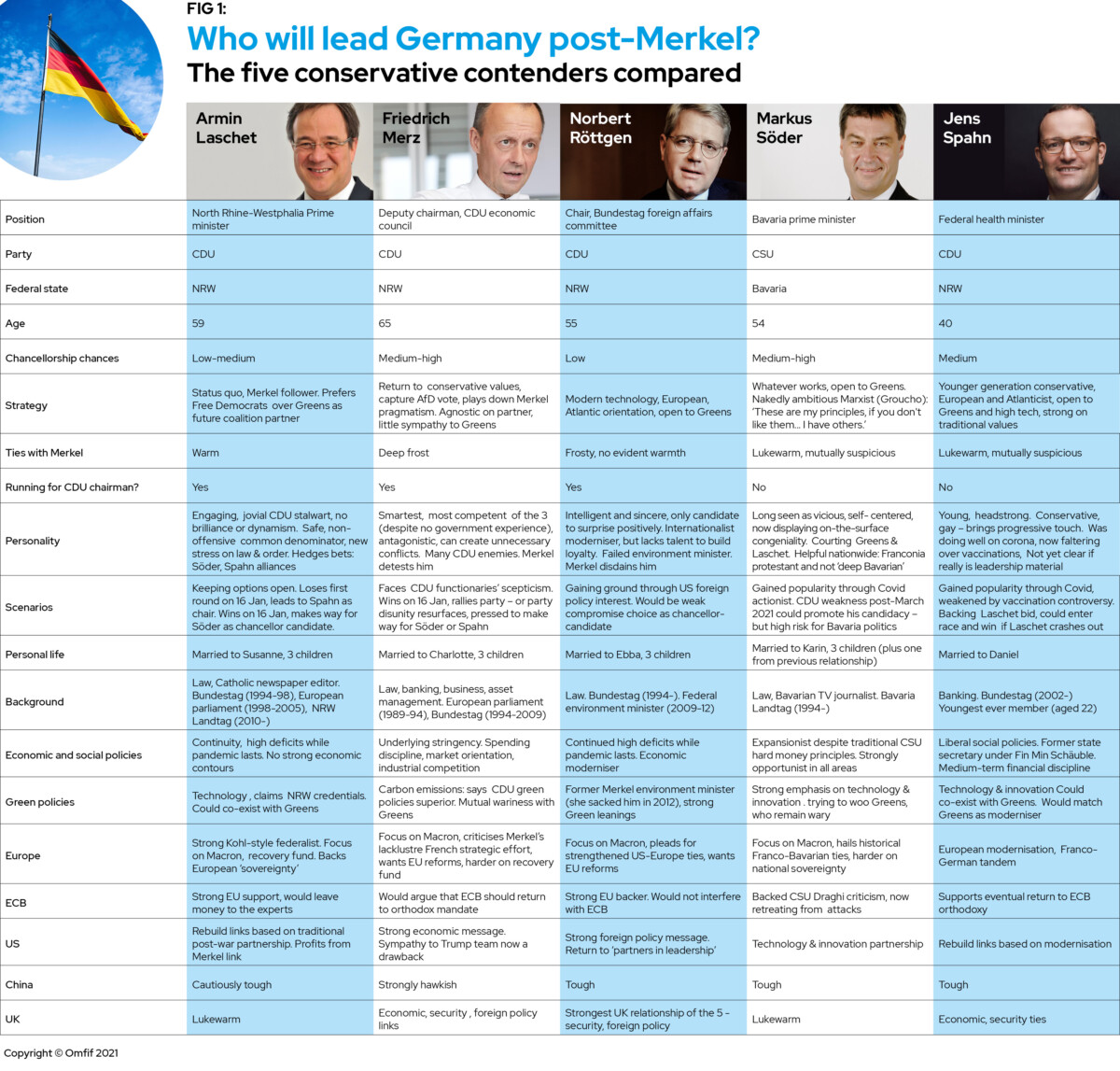 Söder is a blatant opportunist, switching the CSU from traditional right-wing policies and towards ecologically minded modernism, partly to woo the rampant Green party, an awkward yet probably unavoidable post-September CDU/CSU coalition partner. Söder may however decide he can best further his ambitions by staying in his home state, exerting power in federal politics through his larger-than-life Bavarian status rather than being drawn into untidy compromises in the Berlin chancellery.

Another who may benefit is Jens Spahn, health minister in Merkel’s coalition with the Social Democrats, who is allied with Laschet for Saturday’s poll. Although damaged by recent weeks’ controversy surrounding Germany’s slow inoculation programme, Spahn remains well ahead of the three official contenders in opinion polls. But there are doubts about whether he has the skills and maturity to survive the disorderly arithmetic of Berlin coalition politics and guide Germany in European and world affairs. 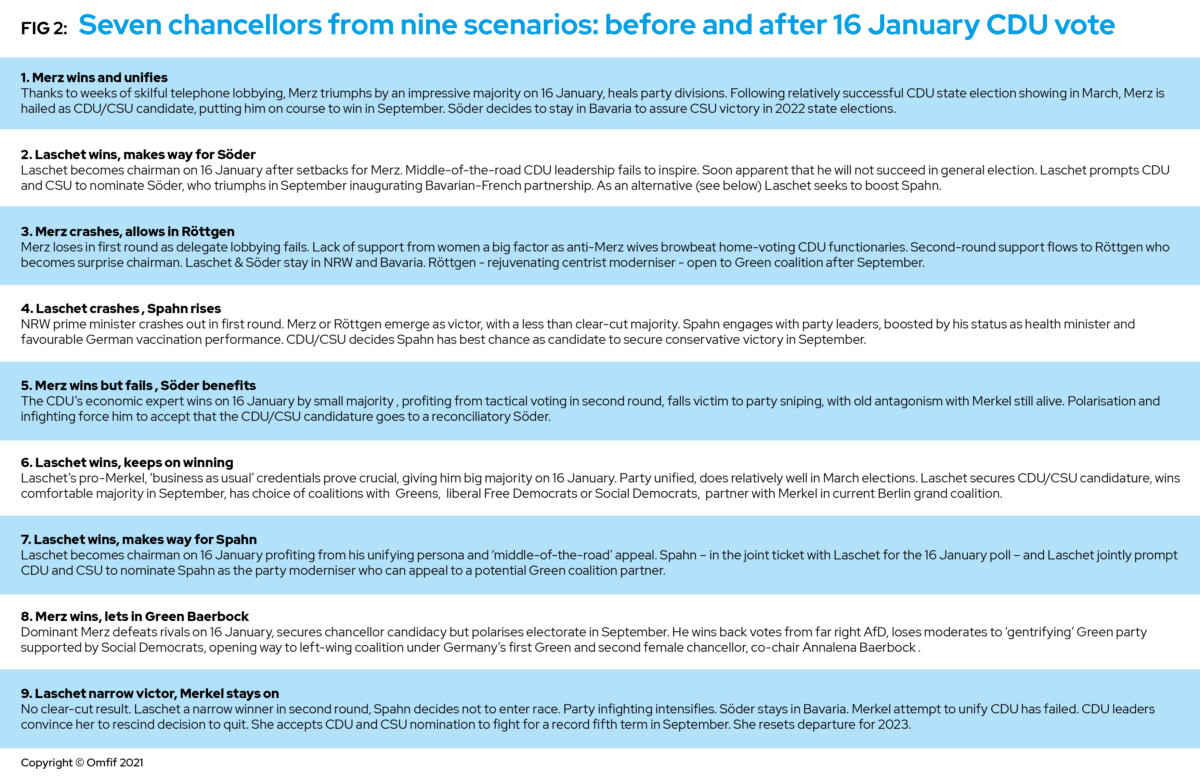 Adding to the uncertainties, September’s contest will be Germany’s first post-war election where the incumbent chancellor is not standing. An increasingly aloof figure in her party, respected rather than loved, Merkel has shown spectacular shortcomings in masterminding her succession. She selected Annegret Kramp-Karrenbauer to take over from her as CDU chair in December 2018. The then prime minister of the Saarland won the party vote only narrowly in a bruising tussle with Merkel’s arch-adversary Merz. This ushered in a year of internal party squalls that led to Kramp-Karrenbauer deciding to quit 11 months ago, opening an undulating path to the twice-delayed 16 January poll.

Myriad imponderables cloud the outcome. Holding the leadership election digitally, with delegates voting from their laptops rather than in a debating hall, intensifies the significance of the contenders’ screen performances on Saturday morning. Merz, a wooden TV performer but a polished rhetorician in personal interactions, will have to work hard to bring over his appeal. Both Röttgen and Laschet appear recently to have made up ground on previous favourite Merz, profiting from effective actions in their respective spheres of foreign policy and domestic security.

A poll of all CDU members would probably give Merz a sizable majority. But the 1,001 delegates on Saturday – of whom 298 are from North-Rhine Westphalia, home state of all three candidates – include many party functionaries who believe the antagonistic, anti-Merkel Merz may damage their career chances. Merz tacticians claim he may win 450 of the votes in Saturday’s first round, requiring him to acquire more than 50 in the second round from whoever – Laschet or Röttgen – is eliminated earlier. That is an ambitious goal.

Even if Merz succeeds in the CDU competition and makes it through to September, coalition bargaining – most likely with the Greens – presents barely soluble electoral equations. Who will lead the Greens in the September elections? The two chairs, Annalena Baerbock and Robert Habeck, have not yet decided. Baerbock may come out ahead.

John Kornblum, a former US ambassador to Berlin, sums up their pulling-power: ‘As one middle aged woman told me: “[Habeck] is the kind of man I would have fallen in love with, in the full knowledge that he would sooner or later disappoint me.”’ The Greens’ new-found attractiveness to middle-class voters will give them a decisive role after September. ‘The Greens will make life very difficult,’ says Michael Stürmer, a Merz-supporting historian and former adviser to Helmut Kohl.

Whichever CDU candidate comes out on top on Saturday will face many more political hurdles.