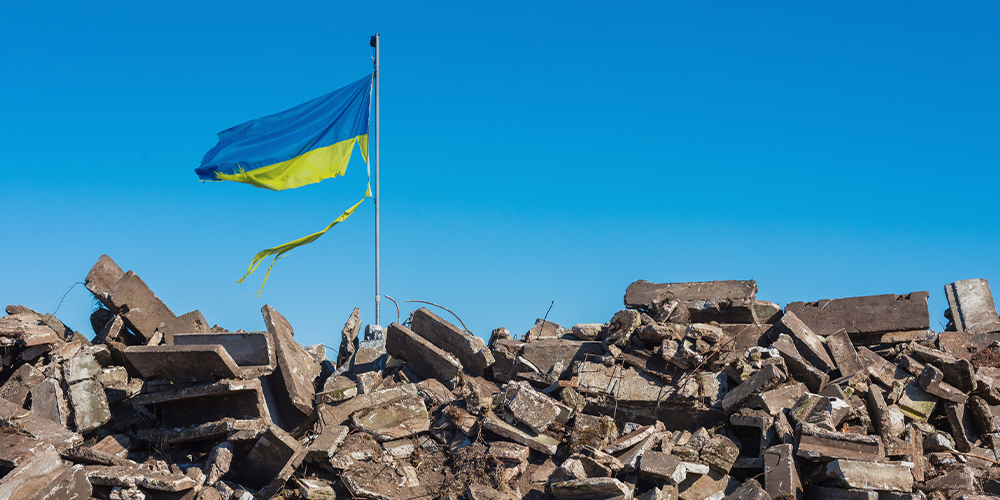 Since the first Russian tanks rolled across Ukraine’s borders in February, the Ministry of Finance has been single-mindedly focused on ensuring that it has been as close to business as usual as possible for its debt management unit.

Yuriy Butsa was appointed to the position of government commissioner for public debt management in July 2018, having previously served as Ukraine’s deputy minister of finance for European integration. He joined OMFIF’s public debt summit on 17 May, a private, all-day event that brought together leading debt issuers and investors, in association with Société Générale, Goldman Sachs and Moody’s.

Butsa told OMFIF in a video interview at the summit in London that the resolute management of Ukraine’s finances at a time of crisis has served a dual purpose. Demonstrating that the machinery of government has remained undisturbed by Russia’s aggression, he said, has helped to strengthen morale across the business community and the general population.

The capacity of the government to maintain its funding programme even as the Russian army was heading towards Kyiv was illustrated within five days of the invasion. On 1 March, it proceeded as normal with its regular weekly auction of government bonds. These auctions have continued on a regular basis since the Russian attack. Butsa said that the pandemic had equipped the government well for funding its programme in wartime conditions, as it helped prepare the ministry and its primary dealers to distribute bonds remotely.

The issuance of just over $3.4bn of regular bonds since the invasion has been complemented by the sale of close to $2.4bn of war bonds, also known as military government bonds. These have been described by some commentators as ultimate impact or environmental, social and governance bonds, given their role in supporting democracy and human rights.

Butsa explained that, although Ukraine’s war bonds are similar to regular bonds, they differ in two key respects. The first is that they are shorter-dated instruments with tenors of one year. The second is that with a denomination of Hr1,000 ($33), they are targeted chiefly – but not exclusively – at retail investors. ‘This has meant working with retail banks to access investors with smaller amounts who want to support the country at this difficult time,’ Butsa said.

Emergency capital controls have complicated access to Ukrainian debt for non-resident investors. But as Butsa explained, the ministry is fully committed to accommodating overseas institutions. He said that the National Bank of Ukraine’s decision to allow overseas investors to repatriate their income from domestic bonds from the start of April 2023 is a notable step in safeguarding relations with foreign institutions. ‘We hope this will act as an incentive for international investors to reinvest their proceeds here and wait until the second quarter of next year to repatriate them,’ he said.

Butsa added that yields on Ukraine’s bonds remain at pre-invasion levels. ‘Capital controls and the fact that the secondary market has effectively stopped functioning means that there is no price discovery for these instruments,’ he said.

Regular government securities and war bonds accounted for just over $5.8bn of the $11bn of Ukraine’s state budget financing between 24 February and 10 May. The balance has come from concessional funding, the lion’s share of which has been in bilateral facilities and grants from multilateral organisations. These have been led by the International Monetary Fund, which on 9 March disbursed emergency assistance of $1.4bn under its rapid financing instrument to help meet urgent financing needs and to mitigate the economic impact of the war. The World Bank, meanwhile, has provided support via direct disbursements and the establishment of a multi-donor trust fund.

Other essential sources of multilateral support have included the European Commission, which has allocated $780m under initiatives including its macrofinancial assistance programme, and the European Investment Bank, through its Ukraine Solidarity Urgent Response. Kyiv is hoping that further support will be bolstered if and when Ukraine wins European Union-candidate status, which it expects to be granted soon.

Concessional funding under initiatives such as those set up by the IMF, EU, EIB and World Bank will continue to play a pivotal role in plugging Ukraine’s financing needs of at least $5bn a month. But Ukraine recognises the importance of swiftly rebuilding confidence in its debt market when the war is over, and the process of reconstruction begins. As Butsa said, this will be critical not just for the sovereign, but also for municipal and corporate borrowers that have traditionally seen external markets as important sources of funding.

‘We hope for official support in rebuilding the country, but we understand that without commercial funding it won’t be possible to finance all our needs,’ said Butsa. Quantifying those requirements will remain guesswork until a ceasefire is agreed. In the short term, said Butsa, Ukraine can only estimate its fiscal gap with any reliability over a three- to four-month timeframe.

In the longer term, he said that the cost of the damage to Ukraine’s physical infrastructure has been estimated at around $80bn. ‘But if we take a broader approach to calculating the reconstruction costs that figure would probably rise to $100bn very quickly,’ he said. ‘The total costs depend on whether we just rebuild what was damaged, or aim to build back better, without asking people to return to cities which have been completely destroyed.’

A consideration which will remain unquantifiable until the end of the war is the size of Ukraine’s post-war economy.

Another input that will be impossible to estimate until the hostilities are over is the contribution that Russian reparations may make to Ukraine’s reconstruction. ‘We believe that from a moral standpoint, Russia should pay for what it has damaged in full, and we will pursue all possibilities from our side to make this happen,’ said Butsa. ‘A lot depends on the legal processes in the countries where Russia’s assets are frozen. We are communicating with those countries about how reparations can happen in the most efficient possible manner’.