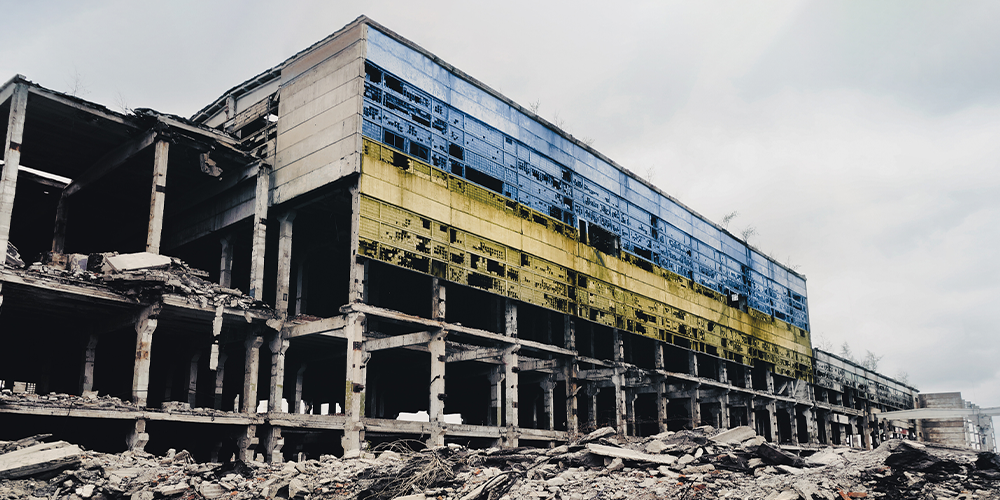 Cost of reconstruction could be as high as $1tn

The reconstruction of Ukraine, when the time comes, is likely to require hundreds of billions of dollars to finance, as well as intricate coordination between supranational bodies, governments, banks and donors. Yet, even at this early stage, though goodwill and promises of finance are plentiful, coordination may prove difficult.

The money will have to come from a variety of sources, but one of the key challenges is the dearth of international communication on the topic.

Artem Shevalev, alternate board director for the European Bank for Reconstruction and Development in Ukraine, bemoaned the absence of a group convening international financial institutions, development agencies, finance ministries from key donor countries and senior Ukrainian officials to organise funding. ‘There’s money chasing the same projects. A sherpa group could coordinate that to make it more efficient,’ said Shevalev. ‘A key output of such a group would be to work out the amount needed for the reconstruction of Ukraine and efficiently coordinate it.’

The cost of restoring Ukraine’s devastated infrastructure has yet to be counted. Aside from the tragic human consequences of the war, the country will face some harsh economic realities over the coming years. The international community is readying the financial tools it will need to help.

Aid is already flooding in. Both the European Investment Bank and EBRD unveiled €2bn packages to support Ukraine in early March, while the Council of Europe Development Bank issued a social bond, raising €1bn to fund projects designed to aid Ukrainian refugees. The World Bank has announced a $3bn package, of which almost $1bn has already been mobilised. The IMF has sent Ukraine around $1.4bn.

But more is still needed. Ukraine estimates it will run a budget deficit of $5bn per month while the war continues. Marketplace funding — the country’s war bonds — are helping to plug the gap, as is the National Bank of Ukraine, but Kyiv has asked the US to provide $2bn per month in order to keep its military operations afloat.

Shevalev said that he has been pleased with the scale of the international response so far, although it could have been faster. ‘The international community has come together strongly to provide Ukraine with support, both defence and particularly financial support.’

A range of estimates on the cost of reconstruction are emerging. Sources in Ukraine have made early estimates ranging from $500bn-$1tn, while the Centre for Economic Policy Research, drawing on examples of previous reconstruction efforts, suggests a range of €200bn-€500bn.

The funding will have to come from a broad variety of sources. Friendly countries, particularly those in the G7, will provide aid in the form of grants, loans and resources. International financial institutions have an extensive toolkit. Some, like the International Monetary Fund, will provide direct budgetary injections. Others, such as the EBRD, will direct projects themselves, as well as offer concessional lending or credit enhancements for Ukraine’s own borrowing in the international marketplace.

‘Ukraine will need to lean on budget injections to mitigate humanitarian crises,’ said Shevalev. ‘But there will also be projects with commercial and strategic geopolitical value, like the plan to supply the European Union with green hydrogen. There are plenty of private sector enterprises to be leveraged. The EBRD’s private sector knowledge and mandate could be instrumental there.’

National development institutions will favour projects that can be contracted to suppliers from their own jurisdictions. Shevalev takes no issue with this, since there will be such a high need for aid. Although, he also noted that the local Ukrainian component will have to be substantial, as it will feed into the overall economic recovery.

There are two issues with which Ukraine will have to grapple in the coming years. The first is that IFIs and bilateral partners are likely to impose some forms of conditionality on their aid, particularly if it comes in the form of grants. Ukraine has been progressing through a programme of reforms to combat corruption, for which it receives tranches of cash. While the country was, until the beginning of the war, still aligned with the IMF’s reform agenda, progress had not been as rapid as some had hoped and some institutions may use Ukraine’s need for cash as an opportunity to encourage an acceleration of these reforms.

The second risk is debt sustainability. A great deal of the aid Ukraine will receive is likely to be delivered in the form of loans, rather than grants. While the terms may be below what commercial marketplace lenders would offer, they still carry the risk of a debt crisis, particularly if Ukraine’s economy does not recover as rapidly as hoped.

There is another potential source of reconstruction resources which, though controversial, could be the single biggest contributor of financial assets and would come with no new debt burden: reparation payments from Russia.

Such a move would be rare, but not entirely unprecedented. Iraq has only just this year discharged the last of its obligations to Kuwait following its invasion in 1990. In total, Iraq paid $52.4bn, directed through the UN Compensation Fund, which took a percentage of the revenue generated by sales of Iraqi petroleum products.

Shevalev pointed out that Russia’s hydrocarbon exports could form part of a similar reparations scheme to provide Ukraine with funds.

An alternative and more readily accessible source of funds would be the Central Bank of Russia’s $300bn of foreign exchange reserves that have been frozen around the world. These could be confiscated and channelled to help Ukraine rebuild.

At present, conversations about extracting reparations from Russia are at an early stage on both sides of the Atlantic. There are likely to be fierce legal battles in international courts before funds can be mobilised.