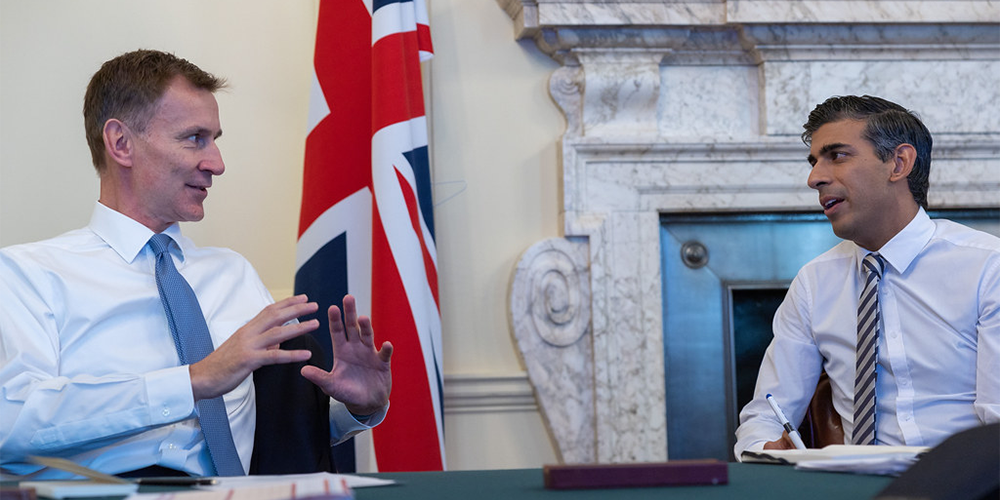 In presenting his autumn statement on 17 November, UK Chancellor of the Exchequer Jeremy Hunt always had a difficult balancing act between fiscal repair after his predecessor’s unfunded tax cutting plan and allowing room to breathe before delivering the full-blown recovery Prime Minister Rishi Sunak needs for the next general election.

In the short term, he has focused on fiscal repair. By declaring a consolidation of up to £55bn in tax rises through stealth – such as reducing or further freezing personal tax – and spending cuts, Hunt is attempting to reduce the UK’s extra risk premium embedded in long-dated gilts and sterling markets after 23 September’s fiscally reckless mini-budget.

This may correct some of the leap in money market interest rate expectations that has surprised the Bank of England more than the macro data. The 225-basis point rise between August and November was the largest inter-forecast jump the Monetary Policy Committee has seen.

And helpful too is Hunt’s reassurance to markets that he had no intention of changing the Bank’s remit, contrary to the intentions of former prime minster Liz Truss and acolytes. As Hunt says: the ‘government and Bank of England need to work in lockstep’. Presumably, this is not just on containing inflation, but also continuing to manage government debt. Swollen central bank balance sheets mean that, if they tighten aggressively, the fiscal authorities bear some of the cost.

On the flip side, Hunt did announce measures to assist demand, including extension after April 2023 of the energy support package (factored into the BoE’s November forecast), shielding state pension payments from inflation and providing help for the national living wage and social rents. But the measures announced do little to prevent the one- to two-year recession the BoE is projecting.

The recession, already underway, is now acknowledged by the Office for Budget Responsibility, which expects real gross domestic product to fall 1.4% year on year in 2023. This will keep UK growth below other major economies and the UK lagging by not having returned real GDP to the pre-Covid-19 peak (Figure 1).

By putting short-term deficit considerations ahead of growth generation, the Conservative party is handing political capital to its opposition. Rachel Reeves, shadow chancellor to the Labour party (and former BoE economist), was quick to label the UK as ‘The only G7 economy that is poorer than before the pandemic.’

Figure 1. Major economies are clawing their way back 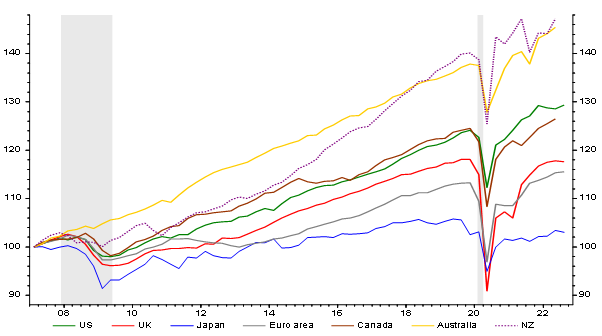 Even with today’s measures, the UK’s fiscal borrowing will stay high over the medium term. Hunt may have patched up the holes left by previous Chancellor Kwasi Kwarteng, but the finances have deteriorated noticeably since Sunak’s (chancellor from 2020-22) budget in March. Compared to then, the OBR now expects the ratio of cyclically adjusted net borrowing to GDP up to 2026-27 to be a cumulative 7.3 percentage points higher, and only partly because of its lower (an average half a percentage point per annum) nominal GDP projections.

Without growth, this could prove troublesome. Net government debt is now expected to peak at 107% in 2023-24, both significantly higher and later than the 96% peak in 2022-23 hoped for in March. As a guide, the OBR expects net debt adjusted for BoE holdings to be 90% in 2022-23. While lower, this ratio is not expected to peak out, at 98%, until 2026-27 as continuation of the Bank’s active quantitative tightening (asset sales) reduces the difference between the two measures.

Either way, today’s debt ratios are around three times Japan’s (34%) when it entered a lost growth decade in the mid-1990s. Japan’s debt is held predominantly (97%) by domestic investors less sensitive to yield and foreign currency ratings.

Yet, with around 40% of UK market-held debt held internationally, ‘the kindness of strangers’ will increasingly hinge more on yield, currency, and ratings considerations than in Japan. Most of the hard work on UK debt reduction may await whoever’s in power after 2024.