How the UK can avoid a debt crisis 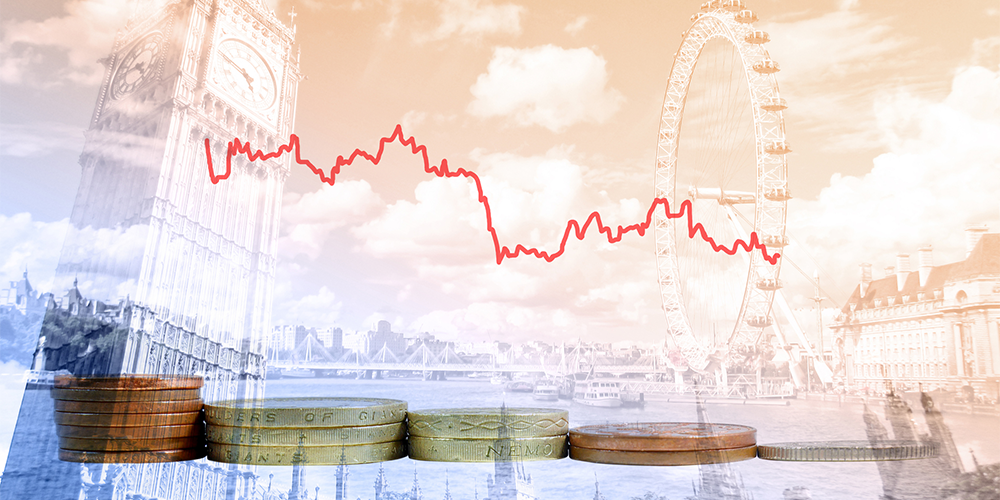 Fiscal considerations are becoming an increasing force in monetary decisions

The Bank of England’s intervention in September to restart gilt purchases to support markets troubled by rising rates and unfunded fiscal expansion is a warning that fiscal considerations are becoming a more potent force in monetary decisions. And it could be an early test case for other quantitative easing countries grappling with bloated central bank balance sheets, high debt and rising policy rates.

The Bank has been quick to differentiate between this financial support for pension funds and previous bouts of QE aimed at stoking inflation. But, by trying to supress bond yields and aid liquidity, the effects look similar, suggesting, if repeated, central banks could increasingly be seen as the de facto monetary agent of government.

The Bank’s QE operations from 2009 had already blurred the boundary between monetary and fiscal policy; some former Bank officials believe that its latest support was, by not being sterilised (offset by debt sales elsewhere), too easily allowed to look like QE. The amounts taken up were considered to be relatively small, but sterilisation would have removed the ambiguity.

Helpfully, Jeremy Hunt, the UK’s latest chancellor of the exchequer, and Rishi Sunak, the UK’s new prime minister and a former chancellor, are scaling back their predecessors’ threatened £60bn of unfunded fiscal expansion. But their new plans could still leave a £30bn-£40bn fiscal gap compared to the March Budget plans. Without further action, the Office for Budget Responsibility’s new forecast on 17 November, expected alongside Hunt’s Autumn Statement, could show the net debt ratio peaking higher, at least at 97%, and later than the 96% summit for 2022-23 projected in March.

Bond yields have fallen back since this fiscal reappraisal, but there could again be upward pressure until bond vigilantes perceive the UK is close to terminal policy rates. With central banks going hard on rate hikes into the northern hemisphere winter, this could come as soon as spring 2023. A number of offsetting factors, suppressing the rise in sovereign bond yields, could then become more visible.

First, with stagflation intensifying, the trade-off between dogmatic rate hikes and inflation reduction will look increasingly destructive to growth. The Bank’s economic model assumes it takes four years for higher import prices to be fully passed on to a consumer price index basket that’s one-third imported. This shortfall, still apparent after sterling’s latest softness, is being absorbed in profit margins. Real wages are deflating again and the Phillips curve looks too flat to ignite wage growth before the next election.

Second, QE globally will be slow to unwind. The Bank of England started active quantitative tightening (gradually selling assets) on 1 November. Having deferred it during the gilts tumult, there may be even more emphasis now on avoiding disruption and yield swings. The exclusion, until the new year, of long-dated gilts (which were purchased during their emergency support) suggests QT will have to be done selectively and quickly curtailed if markets become ‘dysfunctional’.

Elsewhere, Japan’s QE rumbles on, and the US (through passive QT) and euro area (where the European Central Bank is discussing QT in December) are still at the nascent stage of addressing central bank finances. Their swollen balance sheets suggest if they tighten rates aggressively, the fiscal authorities will bear some of the cost.

Figure 1: Could yield targeting be a useful backstop?

Ten-year Japanese government bond yield vs others’, lagged 15 years (all %) 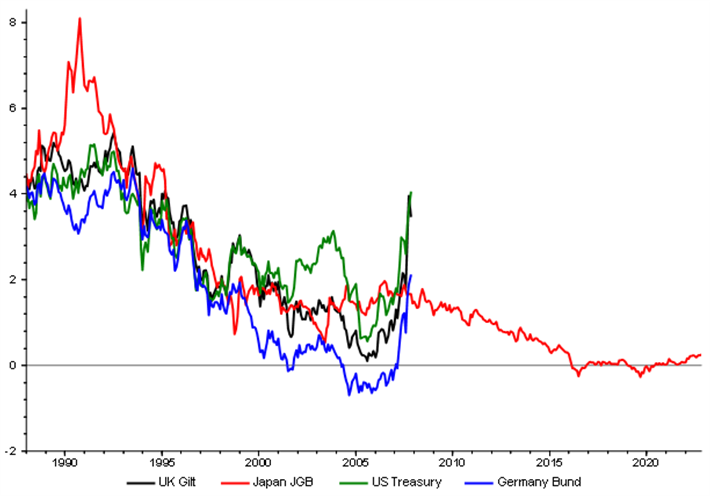 Third, measures are available to cushion the impact of rising rates on fiscal revenues, in turn suppressing yields. One way might be moving to a system of tiered interest rates on banks’ reserves placed with the central bank, as set out by Paul Tucker, former Bank of England deputy governor. No longer fully remunerating these reserves at the central bank’s official rate might reduce government debt service costs relative to rising policy rates and send a signal that central banks are wary of growing fiscal dominance in monetary decisions.

Another means, if needed, would be to cap bond yields explicitly. The Bank of England’s support to aid pension funds already highlights how difficult it will be to go hard on balance sheet reduction via active QT as government debt issuance climbs. Yet, if these sort of liquidity enhancements became frequent, it would be a step closer to Japan’s yield targeting since 2016.

Depending on where global yields go, Japan’s QE (or QT) can now vary, reflecting the need to meet the Bank of Japan’s 10-year yield target. This was set at close to zero in April 2016 but allowed in March 2022 to drift up to 0.25%. This was the BoJ’s token tightening. Compared with tightening elsewhere, Japan’s inaction stands out, leaving its benchmark bond yield dwarfed by those of others (Figure 1).

Unless coordinated, this approach is not without problems, with the BoJ having to intervene to support the yen as rates rise elsewhere. Other changes may be needed. But the logic is that Japan’s ministry of finance now strives to get nominal growth (averaging 0.2% year-on-year since the fourth quarter of 2021) back above the long-term interest rate, in order to borrow without raising the debt ratio.

For the UK at present, this approach looks unlikely. But were it ultimately to follow suit, its de facto target would probably be based on a similar premise, with the chosen yield (probably 10-year or longer to reflect the average maturity of gilts) held at no higher than nominal gross domestic product growth (year-on-year) to help keep the nominal debt stock constant. Whatever inflation is left after 2023’s likely recession would be relied upon to erode some of the real debt stock, which is easier to generate if yields are not soaring.

Longer term, once the base-effects from stagflation have washed out, the UK authorities, if they went down this route, would probably want to base such an approach on 2% year-on-year inflation (the Bank of England’s target for consumer price inflation). In which case, anchoring government borrowing costs around current levels (10-year gilt yields centred on 3.5%) would be helped if real GDP growth could be 1.5% year-on-year or more.

In which case, Hunt’s difficult balancing act on 17 November will be between reassuring markets of fiscal rectitude, while at the same time giving the economy enough time to breathe to deliver the full-blown recovery Sunak needs before the next general election.