Fed should be buying equity, not bonds 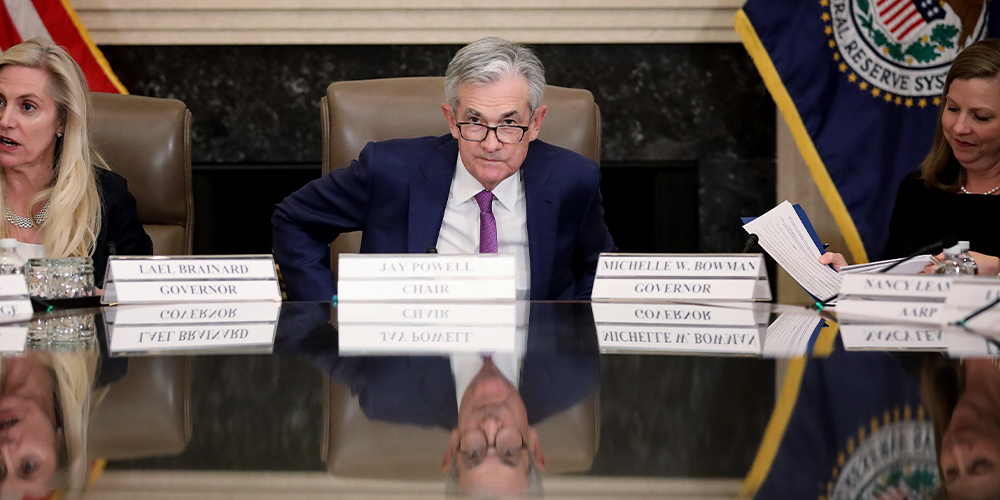 Chair Jerome Powell delivered a much anticipated speech at the Jackson Hole conference on Friday, containing insights on the Federal Reserve’s assessment of the current economic situation. But for those seeking clarity about the Fed’s long term plans, it was a disappointment.

In particular, Powell was silent on the future of the Fed’s securities holdings — its $8tn dilemma. The Fed now owns around one-quarter of the Treasury and agency-backed mortgage market and around one-eighth of the entire US bond market, uncomfortably large sums for a market economy. As Powell noted, such holdings will continue to provide support for the economy even if the Fed stops actively buying bonds. But at some point, the Federal Open Market Committee needs to explain how it plans to reduce them. As I discussed in an earlier OMFIF commentary, it would have been better if the Fed had bought equity rather than bonds since equity prices are low in a crisis and rise in a recovery, making them easy to sell as the economy improves. By contrast, Treasury and agency bonds are safe assets, whose prices tend to be relatively high in times of economic distress and relatively low in times of economic fortune. If the Fed sells them, their prices could fall (and yields rise) imperilling the recovery and risking balance sheet losses.

Faced with this dilemma, and sensitive to market disruptions, the ambition of the FOMC’s exit strategy for its securities holdings has gradually diminished. The initial plan, outlined in June 2011, stated that, when the situation was appropriate, the Committee would ‘cease reinvesting some or all payments of principal on the securities holdings’. This would be followed by increases in the federal funds rate while outright sales of securities would commence to normalise the balance sheet in three-five years. In response to the ‘taper tantrum’ in markets, the plan was dialled back in September 2014 when the Committee announced that the balance sheet reduction would likely to come after it started to increase the federal funds rate and stated that it ‘did not anticipate’ outright sales of securities, but instead planned to ‘reduce the Federal Reserve’s securities holdings in a gradual and predictable manner primarily by ceasing to reinvest repayments of principal on securities’.

A gradual balance sheet reduction involving reinvesting only some principal payments started in October 2017, but in May 2019 the FOMC announced it would end this programme and stabilise the balance sheet at the end of September 2019. At this point, the level of securities holdings (of around $3.5tn) would ‘likely still be somewhat above the level of reserves necessary to efficiently and effectively implement monetary policy’ but that gradually rising non-reserve balances would lead to an appropriate level of reserves over time. However, the balance sheet did not stabilise. Faced by financial market instability in mid-September, the Fed started buying securities with a promise to continue ‘until at least the second quarter of next year’. Then Covid-19 struck and securities holdings ballooned to their current level of almost $8tn, invalidating the previous exit plan.

How should the Committee reduce these massive securities holdings? The plan to lower the holdings by not reinvesting repayments of principal is sensible as it avoids the risk of balance sheet losses if yields spike. But the approach needs to be bolder and involve a switch to buying risky assets in response to economic shocks rather than safe bonds. Specifically, the Fed should announce a rapid transition to a new policy where it will cease buying bonds and stop reinvesting any principal payments on its existing stock, thereby allowing its bond holdings to run off until an appropriate level is achieved. Instead, the Committee should announce that in response to weak economic prospects, indicated by lower equity prices, the Fed will rapidly buy equity until the situation stabilises.

One objection is that the Fed is not allowed to buy private sector assets. But purchases of equity (or, better yet, market indexes) can be organised through special purpose vehicles. Similar Fed operations using SPVs to buy private sector assets occurred during the Covid-19 pandemic, in the context of the primary market corporate credit facility, the secondary corporate credit facility, the term asset-backed loan facility, as well as support for municipalities, corporations, and small- and medium-sized enterprises.

Equity holdings will be much easier to sell as the recovery proceeds since their value will naturally increase. It is realistic, therefore, to assume that any equity that is purchased can be sold within three-five years, as the Hong Kong Monetary Authority was able to do after a similar operation in 1998.

This strategy provides a clear path to lowering the Fed’s securities holdings. The current strategy of an extremely gradual reduction combined with high sensitivity to financial market distress risks leaving the Fed in the same situation that occurred earlier this year, when it needed to restart major bond purchases before it had normalised its balance sheet from the last shock. The danger is that the Fed ends up permanently holding large quantities of bonds, which is not healthy for a market economy. The Fed should get out of the business of buying bonds and, if needed, switch to buying equity.

Tamim Bayoumi is Visiting Senior Research Fellow at King’s College London and former Deputy Director of the International Monetary Fund’s strategy, policy, and review department and Author of Unfinished Business: The Unexplored Causes of the Financial Crisis and the Lessons Yet to be Learned, which was awarded economics book of the year by the Financial Times in 2017.