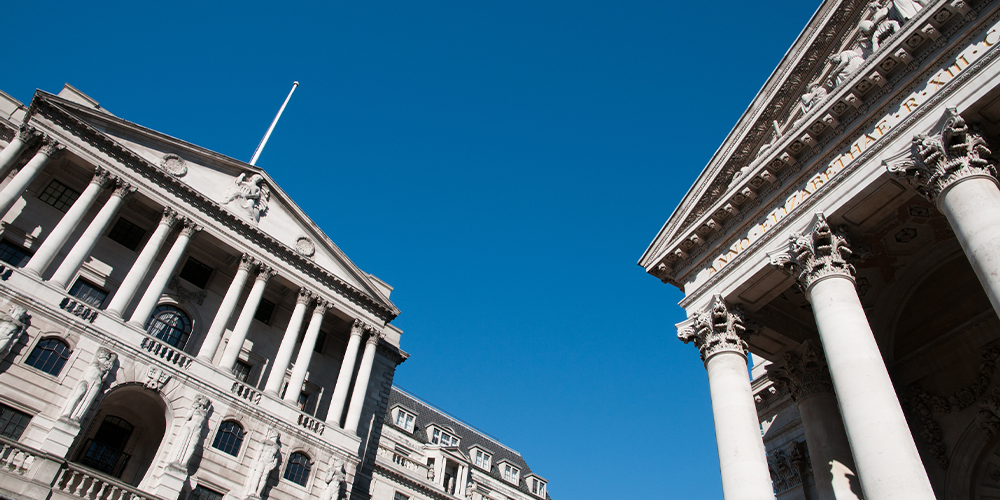 While announced as a ‘temporary’ measure to restore financial stability, the Bank of England’s move on 28 September to again buy long-dated gilts is another reminder of how central banks will struggle to normalise their bloated balance sheets.

Andrew Bailey, Bank of England governor, has confirmed the 14 October deadline for ending the Bank’s temporary financial stability measure to buy long-dated government bonds, though, given the fluidity of events, it may yet be extended. The emergency move to re-enter the gilts market has failed to stabilise bond yields, reflecting persistent worries about how Liz Truss’s embattled government can find an estimated £60bn to fund planned tax cuts.

The stand-off between the Bank and the government over financing deficits serves as another reminder of how central banks will struggle to normalise their bloated balance sheets. Japan’s quantitative easing rumbles on, and the US (through passive quantitative tightening) and euro area (where the European Central Bank will consider QT in November) are still at the nascent stage of addressing their central bank’s finances. The Bank of England’s planned QT has been deferred to 31 October.

For the UK, it also suggests that QE is, after 12 years of using it, not yet dead. QE globally has been no panacea, and the BoE has been quick to differentiate this latest bout from its previous ones aimed at stoking inflation. Yet, by trying to suppress bond yields and signalling that money printing can be used to finance fiscal spending, it reminds us that fiscal considerations have in QE countries become a more potent force behind monetary decisions, even as policy rates rise.

By having put on the table up to £65bn of financial support for UK pension funds, the Bank’s action may look a different breed to previous QE. This includes inflation-linked bonds and is supplemented by a new short-term funding facility to aid liquidity. But, if repeated, the implications would be similar. In Japan, QE started out as financial support. Tumbling asset prices in the 1990s hurt Japanese banks’ balance sheets and collateral, prompting them to write off loans, and the BoJ in 1997-98 to mop up their commercial paper. This was ‘QE1’, and an unbroken 24 years of government bond purchases have ensued.

But, with the UK’s fundamental problems still in place, extending support may offer only temporary reprieve to sterling and gilts while fiscal expansion looks unfunded, and the Monetary Policy Committee is deemed to be behind the curve on rate hikes. Prime Minister Truss is pledging to ‘keep an iron grip on the nation’s finances,’ though this will not prevent Moody’s reviewing the UK’s Aa3 rating on 21 October, after S&P put their ‘AA’ on negative watch, and Fitch put their AA- on ‘negative outlook’.

Figure 1. No major economy has loosened more than the UK… 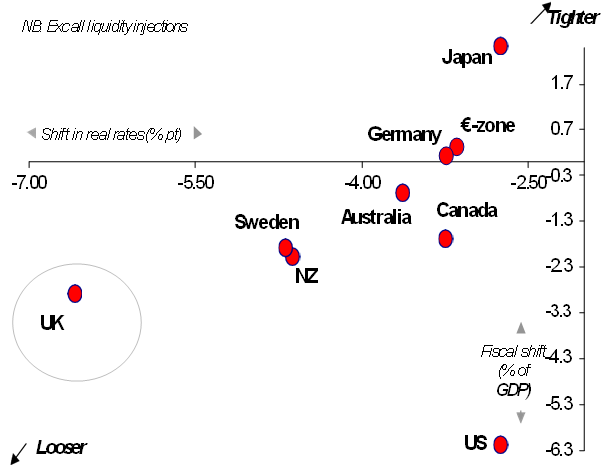 Source: OMFIF, based on Organisation for Economic Co-operation and Development, national and Bloomberg data 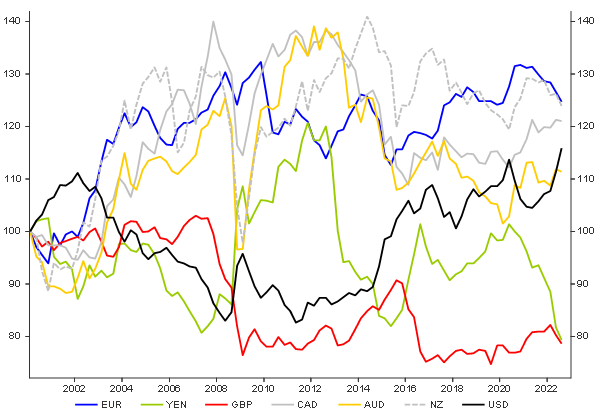 The scale of the UK’s relative policy loosening is most vivid prior to 2020, after which central banks and governments globally expanded policy in reaction to Covid-19. As Figure 1 attests, the UK carried out a greater longer-term net loosening of overall macro policy than any other major industrialised country. And, given the embedded inflation premium over this period, this helps to explain why the pound underperformed other currencies (Figure 2).

The BoE is now making up for lost time in raising rates. But – acting in the opposite direction – Chancellor of the Exchequer Kwasi Kwarteng’s planned fiscal expansion will raise substantially the debt-to gross domestic product ratio in the next few years. The ratio is now expected to peak at over 100% of GDP, and later than the 2022-23 date the Office for Budget Responsibility forecast in its last published reading in March.

The updated OBR forecast is released on 31 October, which is the same day the BoE hopes to start QT. Adding to belief Kwarteng gravely underestimated market fears about the repercussions of his unfunded tax cuts, he is understood to have received preliminary OBR forecasts on taking office on 6 September, predicated on the range of tax measures he later unveiled on 23 September. He also received a written statement from an adviser warning of a possible market fall-out, but chose to ignore it.

This was always a weak platform on which to introduce fresh risks.

First, that of deepening stagflation. The BoE’s economic model assumes it takes four years for higher import prices to be fully passed on to a consumer price index basket that’s one-third imported. This shortfall, still apparent after sterling’s latest softness, is being absorbed in profit margins. Linked to that, real wages are deflating again – having been stagnant over a decade for the first time since the 1860s. The Phillips curve will probably remain too flat to ignite wage growth before the next election.

Second, given the wealth disparities that expanded balance sheets have perpetuated, a resurrection of QE – in whatever form – may again prove disinflationary. In reflation terms, adding liquidity is most effective if it is passed on freely between consumers and firms. In practice, the velocity of circulation has been slow to recover (Figure 3), given the preference in a liquidity trap for drawing down debt and saving. The test was always the extent to which QT and rate hikes would hurt activity, but broad money growth has already slowed to a crawl in the US, and is cooling in the euro area and UK.

Third, a review of the MPC after its first 25 years seems sensible, and akin to that of the Reserve Bank of Australia expected to conclude in the new year. But diluting BoE independence would be counterproductive. Any throwback to 1993-97 where the chancellor and BoE governor set rates advised by a Treasury panel would go against the practice of other G7 central banks, necessitating a further risk premium on UK money rates and, expensively for the Treasury, gilt yields. Meanwhile, pressure from the review may cause the MPC to go harder than necessary on rate rises. 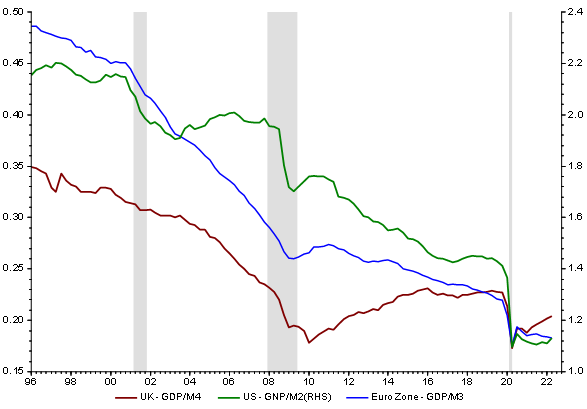 Fourth, and most lastingly, is financing government borrowing. Even in 2019, prior to the necessary fiscal stimuli, US, euro area and UK government net debt averaged 77% of GDP – more than twice Japan’s (34%) when it entered its lost decade in the mid-1990s. Japan avoids disruption by having its government bonds denominated in yen and held predominately (97%) by domestic investors less sensitive to yield and foreign currency ratings. Thankfully, the US, euro area and UK’s too are in local currency, implying default risk is next to zero. This offers extra incentive for euro members to stay in the club.

Yet, with around 40% of UK government market-held debt being owned internationally, ‘the kindness of strangers’ will increasingly hinge more on yield, currency and ratings considerations compared to Japan.