Legacy of quantitative easing could be part of the problem, write Neil Williams and Taylor Pearce, OMFIF.

It was inevitable, even before Russia’s invasion of Ukraine, that Brexit shortages, the reopening of economies, and soaring utility and commodity prices would spark inflation. An unleashing of pent up demand outstripping the pace of supply chain repair on top of base effects (after prices were contained in 2020) have taken inflation measures to decadal highs.

But with wage inflation lagging and stagflationary forces building, what we’re left with might be the wrong sort of inflation – cost- rather than demand-led. For central banks, the dilemma, as in 2011 with surging oil and food prices, will be to avoid stalling the recovery as they raise rates. And for highly indebted governments, craving demand inflation may be easier than sustaining it.

Inflation expectations have revived since lockdowns lifted, with US five-year break-even rates running at over 3%, while in the UK it is at about 5%. With employment likely to lag behind output, central banks may have to look through much of it, awaiting the longer-term disinflationary forces from balance sheet repair, demographics and automation. This is a long way from 1970s Britain, where public ownership and wage-price spirals contributed to a three-quarters fall in the FT 30 Index between 1972-75. In a highly indebted world, the alternative extreme – Japanese style deflation – is unthinkable.

What are the main sources of inflation from here? First, the legacy of quantitative easing may remain part of the problem, not the solution. Early QE can be credited with unclogging the system but has since been an imperfect tool. When the Bank of England started QE in March 2009, it was aimed at an orderly functioning of markets via two main channels. Gilts would be sold to the BoE, freeing up banks to pass on their higher cash holdings, boosting the money supply.

Figure 1: How quantitative easing was meant to work 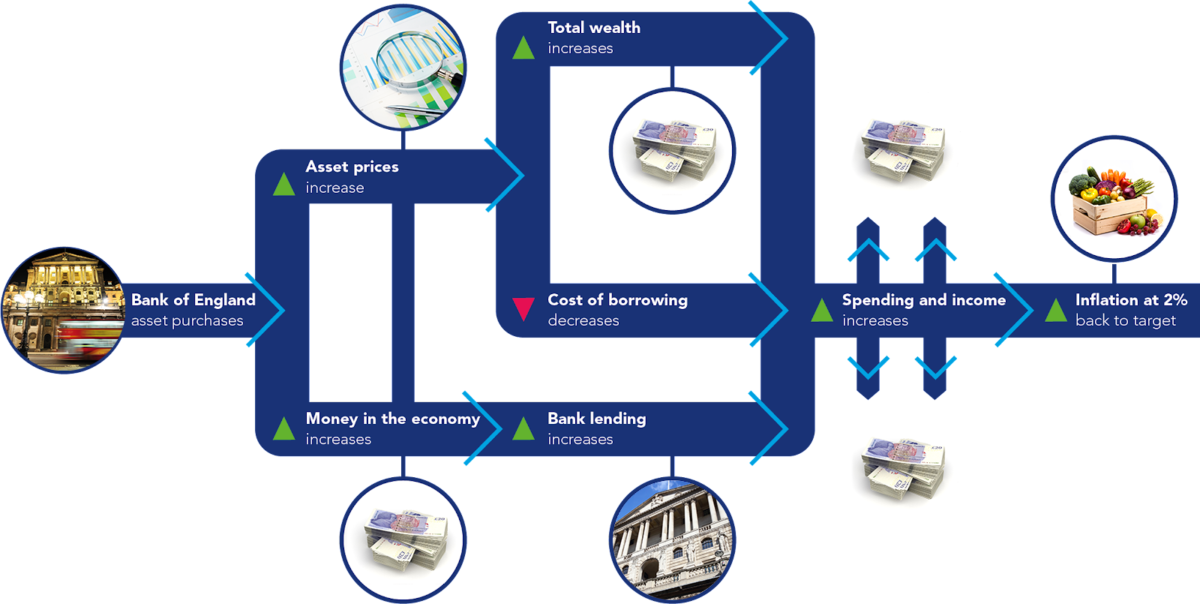 Source: OMFIF, adapted from the Bank of England

The two channels were to be increased bank lending and higher asset prices. This would ultimately reduce deflation-risk and ensure consumer price index inflation didn’t fall short of its 2% target. The Federal Reserve’s aims were similar. Both central banks assumed a one-for-one money boost to gross domestic product growth. However, they were only partly successful. The response of GDP to money growth has been less than one-to-one, as consumers and producers wary of unemployment and deflation became less sensitive to interest rates, a liquidity trap.

QE is slowing and due to end in the US. Through bond reinvestment, the euro area and UK will continue QE for longer. Japan is approaching its 25th year of QE. If its legacy – boosting asset prices over wages – is slow to lift, this could further widen wealth disparities.

In reflation terms, it’s no good throwing money out of a helicopter if it isn’t spent.

In practice, the velocity of circulation has been slow to recover, given the preference in a liquidity trap for drawing down debt and saving over consumption. QE could be accused of getting to those (asset holders) who probably needed it least. The test will be the extent to which stimulus withdrawal through quantitative tightening and rate hikes impedes the real economy. This could prove particularly challenging for the US and UK, having already set their course for fiscal tightening.

More encouraging for demand is the labour market. As in 2008, rapid employment downturns do not guarantee the sharpest recoveries. Yet, US jobs have been reassuringly quick to spring back, driven by returning workers. Even underemployment, which includes those not searching but wanting to work or work more, at 7.2%, is within sight of its pre-Covid-19 rate.

In the UK, the unemployment rate had been cushioned by furloughing. Measured differently to the US, unemployment stood to rise as furloughing lifted, reinforcing BoE Governor Andrew Bailey’s early warning that ‘The labour data at the moment are the hardest to interpret’. Encouragingly, the fallout has been contained, with unemployment, 3.8%, approaching its pre-Covid-19 rate and vacancies at a 20-year high. Yet UK real wage growth – having been stagnant for the first decade since the 1860s – is falling again, unable to hold on to last-year’s base-assisted gains. The still flat Phillips curve should limit the extent of BoE rate hikes.

Even if there are some green shoots in this spring’s cluster of pay claims, they may be trampled unless corporate pricing power is buoyant. Implicit-price indices from GDP data suggest that US corporates’ pricing-power is now revving again, growing 6.0% year-on-year – its perkiest since the second quarter of 1982.

This inflation source, via price increases, looks more powerful than the lagged effects of QE and wage growth, especially as pent up demand for relatively price-inelastic products and quasi-monopolies translates into margin repair. But it remains to be seen how lasting this can be in a competitive world and the extent to which consumers will carry the can as companies adjust costs for zero emissions requirements.

The shocks to the energy market from the invasion of Ukraine will fall hardest on Europe, which is more directly dependent on Russian gas and oil. But sustained high global energy prices would adversely affect the US and UK, constraining growth and adding directly to consumer price index baskets. Should political distrust, beggar-thy-neighbour policies, populism and any international ‘blame game’ following Covid-19 build, the inflationary flame would snuff itself out. Up until the Russian invasion of Ukraine, the notion of slower international trade had appeared outside most official projections.

Admittedly, we have a less confrontational US president, though he has not rolled back his predecessor’s trade restrictions. For financial markets, trade frictions may thus (like Brexit) be more a ‘crack in the ice’ than a ‘cliff edge’, with a disparity between the goods and service sectors broadening out to countries whose cheaper imports can fill the gap. This offers a reversal of the goods-services rotation under Covid-19.

If so, direct vulnerability lies not with the US (whose trade dependence is limited) and China (where dependence is falling), but smaller, open economies. These include those in south east Asia, where Malaysia and Thailand’s trade (exports plus imports) each exceeds 100% of GDP, Vietnam’s is 200% and Singapore’s is 300%. Australia and New Zealand have trade representing 46% and 56% of GDP respectively, while it is 160% in the United Arab Emirates. In Europe, it is 88% in Germany, 64% in the UK and 150% in the Netherlands.

Either way, nominal GDP recoveries since 2009 have been output driven, with insufficient demand inflation to trigger their usual reaction functions. Critically, because of their asset purchases since 2008 – representing a liquidity injection to the private sector worth about 95% of US GDP or one-and-a-quarter times China’s – the world’s big four central banks have skin in the game. If they tighten too aggressively, balance sheets and government finances may get hurt.

Neil Williams is chief economist and Taylor Pearce is economist at OMFIF.

‘The shocks to the energy market from the invasion of Ukraine will fall hardest on Europe, which is more directly dependent on Russian gas and oil.’