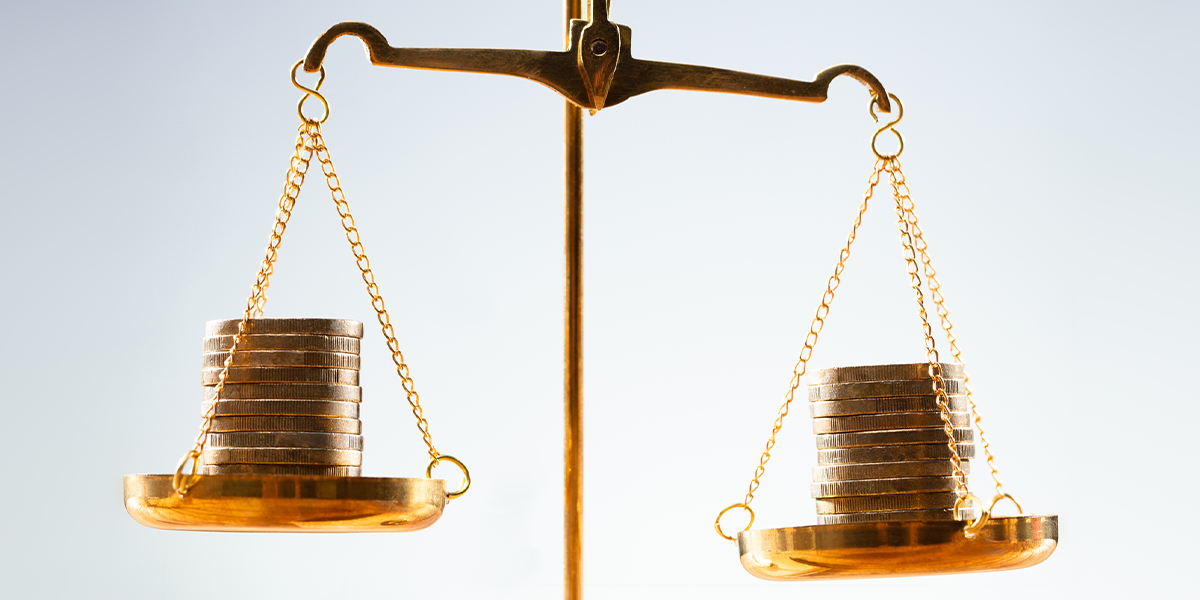 Central banks need to keep abreast of fast wage growth, not arrest it

Wages are out of line with wealth. Wealth is determined by many things, but its relationship with wages is a fine balance: too much wage growth and costs destroy earnings; too little wage growth and demand becomes anaemic. The latter may not be seen as a problem for individual firms but, in aggregate, it has become a fundamental drag. And the lack of developed market wage growth in recent decades, amid high asset valuations and concentrated wealth, has important political implications.

Policy-makers around the world are recognising the threats posed by heightened inequality, and the pandemic has catalysed a regime shift that was already underway in many countries. This has taken diverse forms, ranging from average inflation targeting at the US Federal Reserve (a promise to refrain from prematurely truncating the wage cycle), to the common prosperity agenda in China (an attack on ‘capitalist excesses’).

In the context of the sharp appreciation of China’s real effective exchange rate for most of the period since joining the World Trade Organization in 2001, it makes perfect sense that the US should aim to tackle inequality by bolstering wage growth, while China should start from the wealth angle.

A balance sheet has two sides, however, and the People’s Bank of China’s extremely early tightening (starting in May of 2020) was grounded in a recognition that China’s post-2008 financial crisis growth has been driven primarily by debt. It didn’t take much to tip the indebted real estate sector over, and the Evergrande saga is good evidence that the renminbi will soon begin a multi-year real-effective depreciation, with the PBoC now switching back towards easing just as developed market central banks pivot toward hawkishness.

Renminbi depreciation and dollar strength will reduce the need for the Fed to tighten, initially by bringing import price inflation back in line with Fed forecasts, and then by reminding policy-makers of the administration’s goals of re-building middle America and wages. Fast wage growth should be seen as potentially the beginning of a relative price shift, necessary for rebalancing. In short, the Fed need only keep abreast of it, rather than arrest it.

It’s more complicated than that, though. Covid-19 is rendering a relative price shift of its own. Inflation anxiety and central bank hawkishness will continue to rise alongside the bullwhip up effects that entails in headline inflation in the next few months. But the cries of inflationistas will wane over the second half as these bullwhip effects sharply reverse.

The term ‘transitory’ was always vague and is now out of vogue. We have enough data to be more specific and to define a framework specifically for the Covid-19 world. The inflation profile which follows a simultaneous positive and negative demand shock could be called ‘bifurcation inflation’, or ‘biflation’.

Demand has been propped up by stimulus amid the negative supply shock, but it has also been channelled towards those goods and services that can be consumed with very little in-person contact, while in-person services have suffered. This bifurcation of demand growth has driven sharp inflation in parts of the economy, but much of that will reverse equally sharply over the course of this year, for two reasons.

First, many of the sectors benefiting from emergency Covid-19 measures in 2020-21 will receive a much-diminished boost in the Omicron wave, partly because the restrictions are lighter, and partly because people have already made the purchases necessary to sustain their changed working and living patterns. Current levels of global trade and spending on these goods, therefore, are not sustainable. Indeed, world trade has barely risen since Q1 of last year and industrial production is now lower than that level (Figure 1). The potential for a growth scare in this context is sizeable (Figure 2). 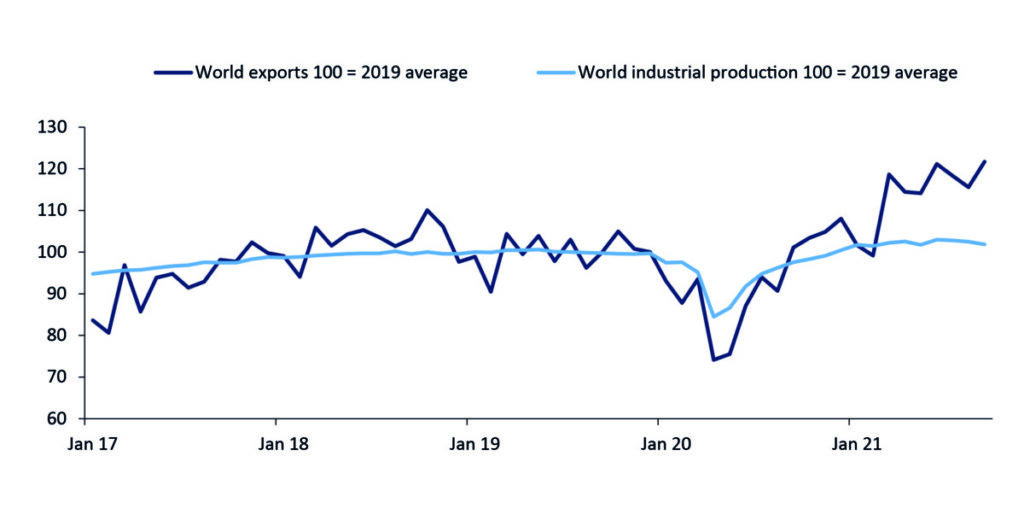 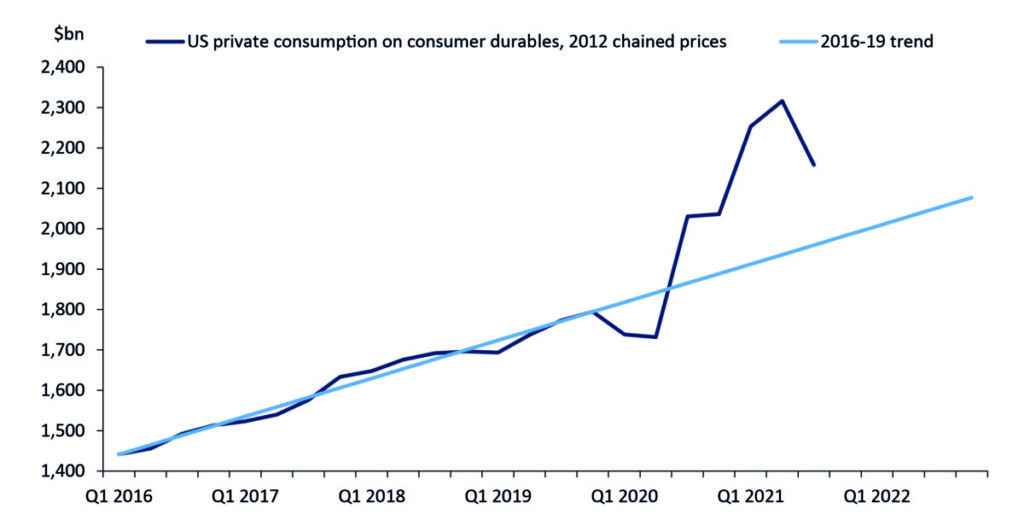 It’s possible that demand will simply shift elsewhere in the economy, as people find new and ingenious ways to spend their money. But even so, the effect is likely to be less obvious in headline inflation, partly due to countervailing forces but also due to the second reason: as a result of inflation trends, the supply side has begun to adapt to the pandemic. Hefty investment in software has made it easier for us all to work from home, with much of the consumer durable spending of the last two years – more aptly thought of as household capital expenditure – also facilitating work from and greater time at home.

Strong Chinese investment in the medical equipment sector also suggests the world is now better prepared for a jump in demand for personal protective equipment and goods for the fight against the virus (Figure 3). Investment in manufacturing, meanwhile, appears to have kept pace with pre-pandemic trends. Elsewhere, manufacturing capital stock has avoided serious erosion. Indeed, the inflation threat for 2022 could come from low-Covid periods, as the capital stock and labour capacity in these in-person sectors has atrophied. 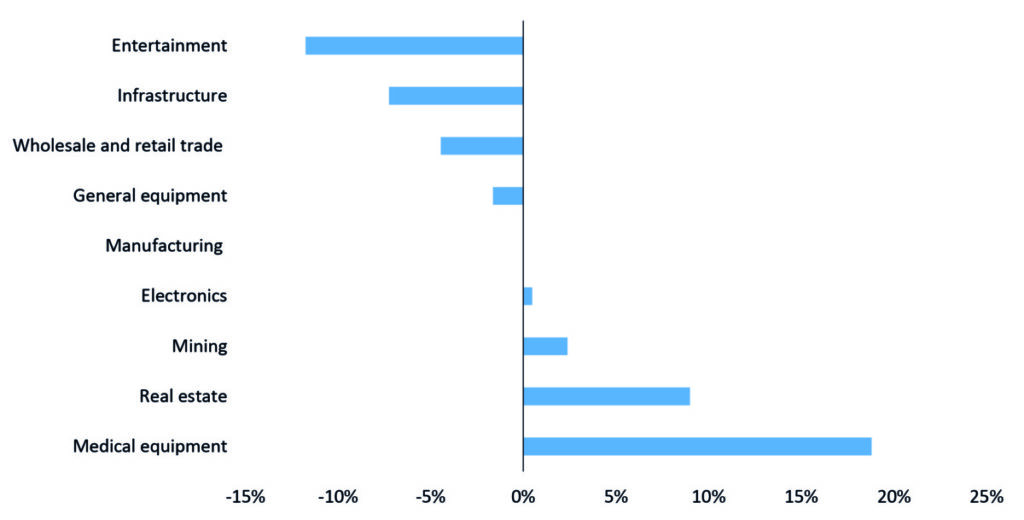 The timing of the likely bullwhip down effects in inflation as the economy continues to adjust to Covid-19, combined with China’s woes, are likely respectively to facilitate and incentivise Fed mindfulness of its role in rebalancing the economy. A slower pace of tightening will prevail.

Before then, however, the Fed must begin normalisation and re-align policy with fast wage growth. The first hike is likely to come in March, with quantitative tightening now part of the mix too. Inflation anxiety will remain heightened, while the Fed’s December meeting minutes suggest that keeping abreast of wages could easily mean derailing equities, forcing the Fed to address the wealth side of inequality as well.

Freya Beamish is Head of Macro at TS Lombard.