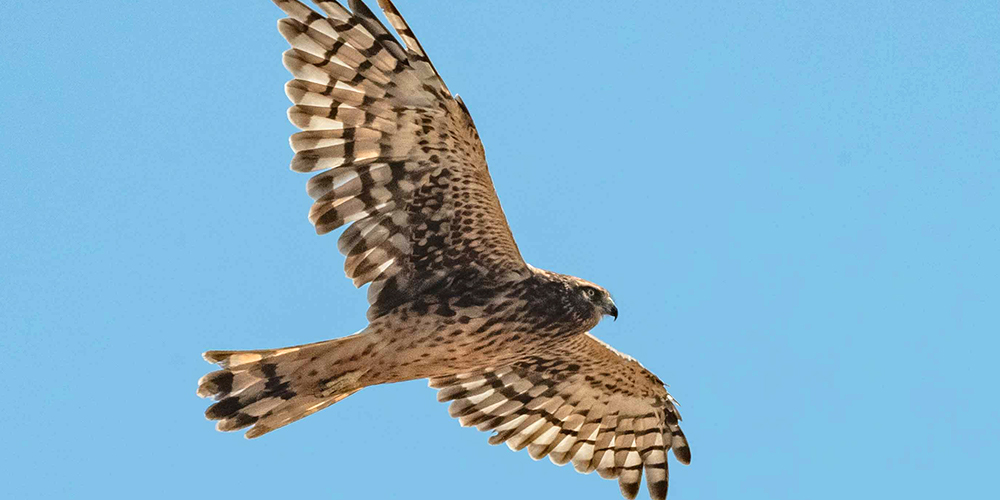 We are all inflation hawks at heart, says Bullard, but unlikely to spread our wings any time soon

Jim Bullard, president of the Federal Reserve Bank of St Louis, painted a confident picture of US inflation prospects at an OMFIF briefing on 19 May. He noted that, in spite of widespread supply chain bottlenecks and unexpected labour market tightness, ‘market judgement remains consistent with the plan we are laying down.’ As part of its new average inflation targeting framework, ‘appropriate monetary policy will likely aim to achieve inflation moderately above 2% for some time… following periods when inflation has been running persistently below 2%.’

Bullard pointed to his preferred market measures of inflation – Treasury Inflation-Protected Securities and five-year, five-year forward swaps – as a suggestion the market was unwilling to bet that inflation will end up on the high side (Figure 1a). To close the gap in the personal consumption expenditures price level that has emerged since 2011, this measure would have to come in at around 2.5% per year through to 2029. This is consistent with the median market-implied forecast, according to the Federal Reserve Bank of Minneapolis (Figure 1b). 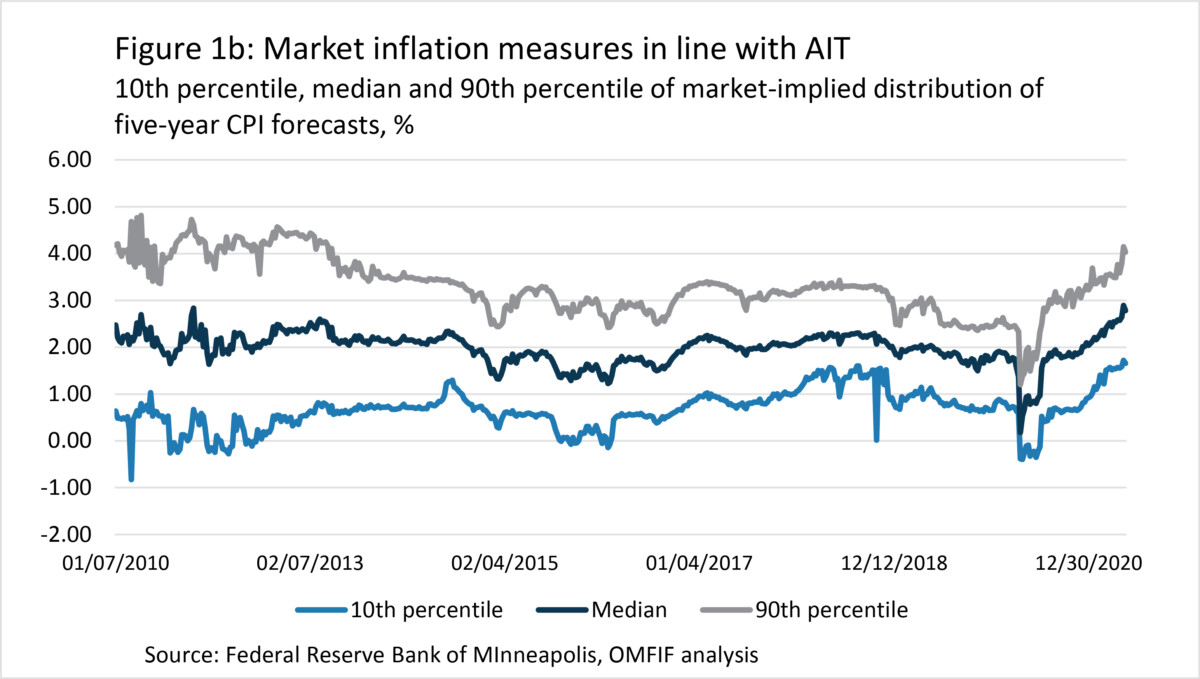 By the summer, Bullard suggested, the US central bank should have enough information to adjust the course of policy if necessary. In the meantime, the new average inflation framework has left the Fed in a strong position to see through transient price shocks and rely on concrete data.

Consumers’ expectations of inflation have risen slightly, to around 1.5%, as have those of businesses. As Bullard underscored, these rising inflation expectations are ‘the key variable for monetary policy.’ They come amid widespread disruption to key components of the real economy, most importantly hiring and supply chains. Businesses are increasingly finding that the key inputs from these two groups – whether it is workers or key production inputs such as microchips – appear to be in short supply.

Bullard pointed to the ratio of unemployment to vacancies to suggest that the labour market is tighter than commonly represented. This measure has fallen to around pre-pandemic levels. Similarly, the Federal Reserve Bank of Kansas City’s Labor Market Conditions Index appears to point to roughly normal labour market conditions (Figure 2). 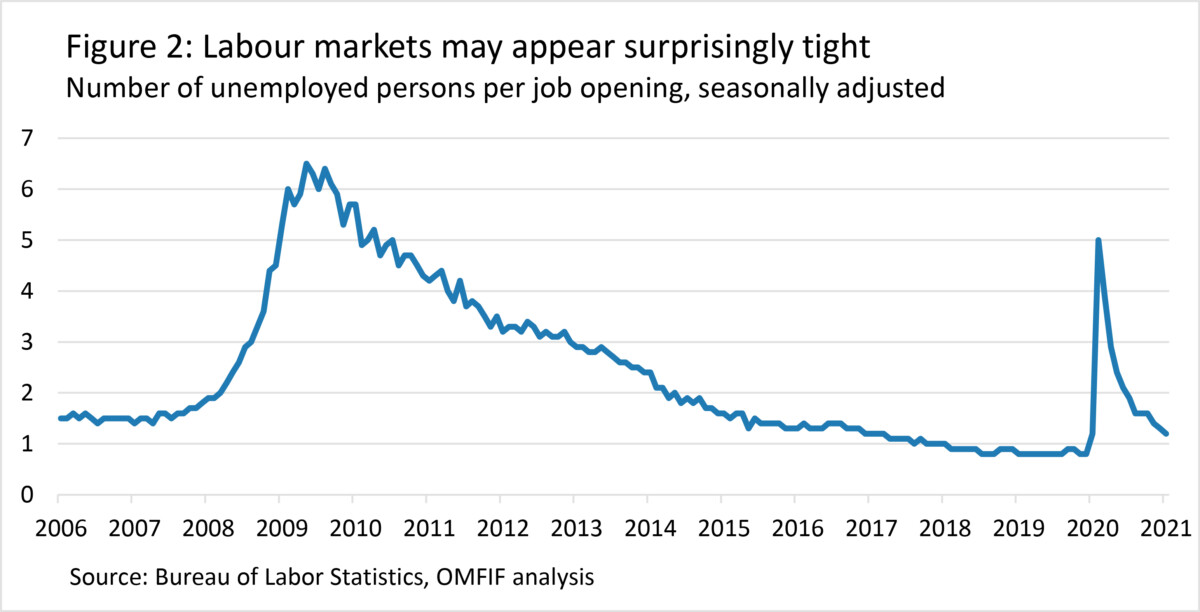 That being said, this picture is tempered by the data on employment participation and wages. However you slice it, worker compensation has remained stagnant, suggesting that labour markets still have plenty of slack. This is true for both union and non-union workers, as well as workers in goods production and service sectors (Figure 3). Price increases that are not matched by wage increases will result in lower real wages, which in turn will dampen inflation, as it did following the 2008 financial crisis. 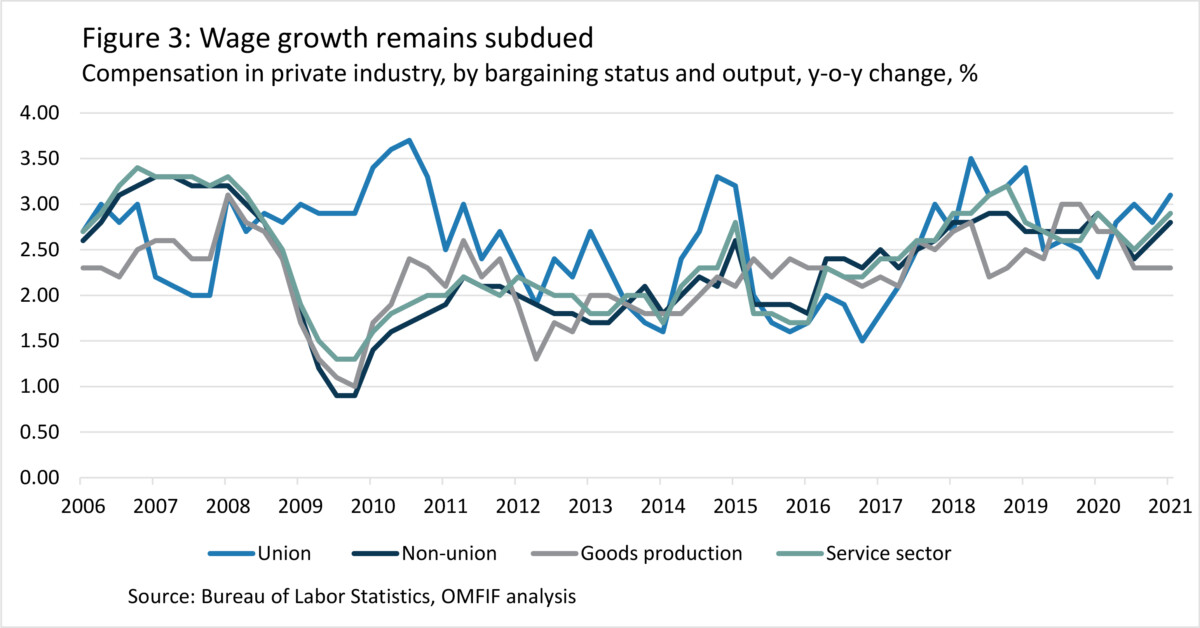 Labour utilisation also remains low. While Bullard acknowledged that participation remains ‘somewhat above the downwards trend line,’ the data suggest this is not an adequately urgent characterisation. The ratio of prime age employment to population, preferred by some Fed governors as a measure of labour market tightness, is still far from its pre-pandemic highs. Many workers remain put off by the threat of the virus or a lack of access to childcare and are delaying a return to the labour market (Figures 4a and 4b). Measures of both the price and quantity of labour available in the market suggest there is significant slack. 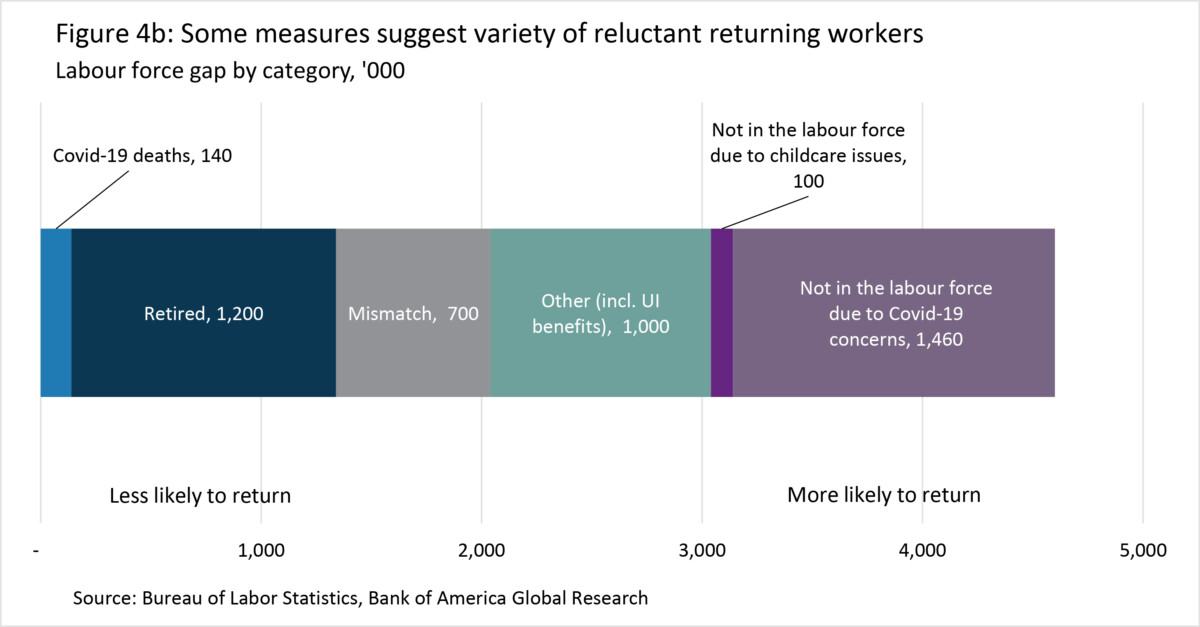 As Bullard notes, many firms are having to offer special incentives – such as signing bonuses – to tempt workers into jobs. But until this meaningfully shows up in labour utilisation and wage growth, it will not feed through to persistent inflation. The Fed’s decision to adopt a framework that can allow for wage growth to meaningfully feed through to inflation before hiking shows it has learned the lessons of the stunted recovery during the 2010s.

The other price pressure channel to which Bullard drew attention is also a legacy of the stalled recovery from the 2008 crisis, but with subtle differences. 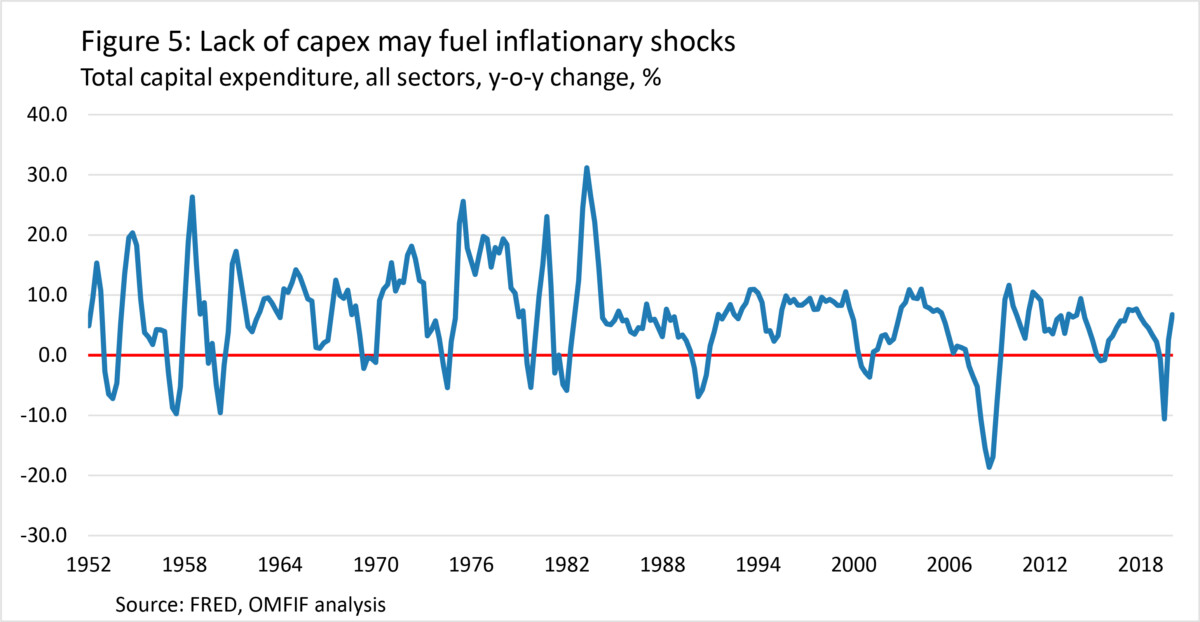 A decade of low global growth and lacklustre demand has left firms running with as low capacity as possible. As Bullard pointed out, the current US economy is ‘not geared to grow at 6% to 8% for a whole year,’ let alone several years. Plants are ‘running all the time,’ he added, ‘but if you wanted more product you would have to build another plant, which takes two years to do, so prices are going to go up.’ Firms are no longer equipped to deal with high levels of demand. This is due in part to the fact that firms who survived the 2008 recession are inherently conservative. They are reluctant to invest or build up inventory due to the possibility of downside shocks. As one lumber trader put it in a Bloomberg Odd Lots podcast:

The release of pent-up pandemic demand has collided head first with an economy geared around low-capacity, low-inventory businesses. This will necessarily result in some price disruption; the pricing power of firms is high. But this will slacken for one of two reasons: either demand will fall off or capacity will catch up to meet demand.

After decades of low capital investment, it will take some time for firms to invest in new equipment and new plants to meet this new demand (Figure 7). As this happens, disruptions that feed through to prices will become commonplace. Transitory, adjustment-related price pressures, however, should not awaken the dormant inflation hawk in anyone. They are a sign of a healthy, growing, demand-driven economy.

Bullard emphasised the role of labour markets and business capacity in generating price shocks. But in both cases, a reversal of the post-2008 trends of low wage growth and low capital investment should be welcome. And if it takes some inflation shocks to achieve that, so be it – the Fed is right to see through these.