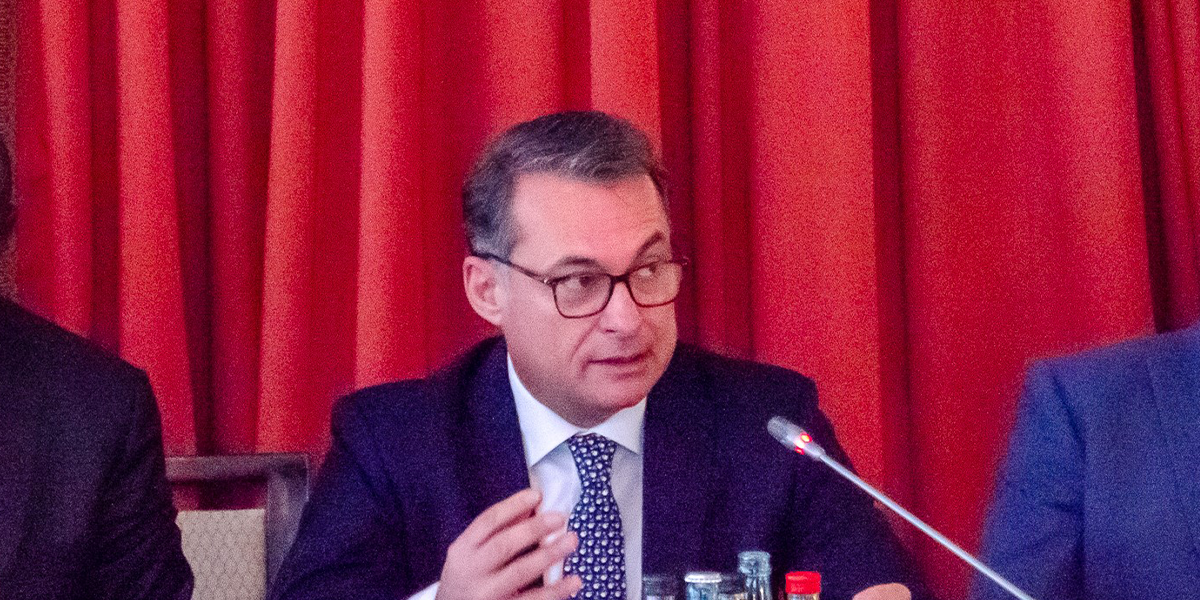 Joachim Nagel, confirmed as the next Bundesbank president, is a convivial central banking heavyweight who will maintain a traditional Germanic anti-inflation message, signalling continuity with incumbent Jens Weidmann, leaving after 10 and a half years.

Nagel, 55, embodies the principled yet pragmatic approach of a ‘central bankers’ central banker’, combining a down-to-earth manner with a firm technical grasp of international financial markets. His appointment, one of the more important jobs settled in the aftermath of Chancellor Olaf Scholz’s government formation, may signal a more emollient style and tone at the German central bank, but no shift in fundamental policy.

Nagel takes the helm at a difficult time for Germany, with the harmonised inflation rate at a 30-year high of 6%, fears of declining post-pandemic recovery momentum and widespread opposition to the European Central Bank’s massive government bond purchases. The ECB on 16 December announced a throttling back of asset purchases next year, but is sticking to a general policy of monetary accommodation that is increasingly out of favour in Germany.

Although the Bundesbank has given up to the ECB its once-feared sway over European money, it maintains a symbolically important position in Germany and abroad. Nagel is a member of Scholz’s Social Democratic Party (SPD), which won a narrow victory in the 26 September general election. The complexities of choosing a candidate supported by all partners in the three-party German coalition helps explain the delay in confirming the choice, which was first reported by the Financial Times on 2 December

One of Nagel’s most challenging tasks will be to use his vigorous speaking style tinged with waspish humour to try to offset the Bundesbank structural minority position in the decision-making, 25-member ECB governing council. Nagel is a close friend of Weidmann, who announced in October he is stepping down, more than five years before the expiry of his second eight-year term. This follows numerous internal ECB struggles, above all with former ECB President Mario Draghi, now Italian prime minister. Weidmann will formally depart from the Bundesbank on 21 December. Assuming the formalities of the next few days go seamlessly, Nagel will take up his post on 3 January.

Behind Nagel’s collegial and sometimes jocular air lies considerable steel. The interaction between Christine Lagarde, the ECB president, and Nagel will now become Europe’s pivotal central banking relationship. Nagel’s aim is to offer full co-operation between the ECB and Bundesbank, but help shift the ECB towards a more robust monetary policy.

Nagel worked at the Bundesbank for 17 years, six of them as a member of the executive board, where from 2010-16 he was responsible for markets, information technology and controlling.

Since November 2020 Nagel has been deputy head of the monetary department at the Bank for International Settlements in Basel, carrying out global banking operations for the world’s central banks. In 2016 he left the Bundesbank to become general manager and then, for three years from November 2017, board member for international operations at KfW, Germany’s state-owned development bank. He has an economics PhD from the Karlsruhe Institute of Technology.

In his early statements, the new president is expected to emphasise that he, like Weidmann, is opposed to the ECB’s over-reliance on quantitative easing and advocates a smooth, consistent return to a ‘normalised’ monetary policy. This was major debating point at the ECB’s governing council meeting on 16 December, Weidmann’s last. The central bank confirmed the ending of the pandemic emergency purchase programme on 31 March, but said it could be restarted if circumstances warranted.

Nagel’s scepticism about the long-term effects of ultra-accommodative policy is combined with deep experience of implementing it. As Bundesbank head of markets and then as board member, he has been closely involved with the ECB’s ever-widening bond purchase programmes.

These started with covered bond purchases in 2009, continued with selective support for Greece and other debt-strapped euro area countries in 2010 and then full-scale quantitative easing in 2015, accentuated by the PEPP from March 2020. Nagel was also involved in implementing the German government’s financial market stabilisation scheme SoFFin set up during the 2008 financial crisis.

In conversations before full-scale QE started in March 2015, Nagel pointed out how negative interest rates and central bank purchases to depress bond yields would badly affect the profitability of smaller German banks and insurance companies. But he has also underlined the huge savings to the German state through constantly lower and often negative government borrowing costs.

He has shown a practical mindset by pointing out that the Target-2 balances of the Bundesbank’s lending to other euro area central banks – now €1tn-€1.1tn against €600bn-€700bn when he left the Bundesbank in 2016 – amounts to a form of covert mutualisation of European debts.

Nagel’s forthcoming partnership with Christian Lindner, the  finance minister, from the liberal Free Democratic Party, with relatively hawkish views on European economics, will be widely scrutinised. He will need to coalesce, too, with the Greens, the second party in the SPD-led coalition, especially deputy Chancellor Robert Habeck, who is keenly interested in monetary affairs and has taken over revamped economics and climate ministry.

Emphasis on green finance and digitalisation

Nagel will add significantly to the Bundesbank’s firepower in promoting Frankfurt as a centre for green finance based on the euro – an important Greens’ electoral goal. He believes European central banks can enhance ideas promoted by the BIS in Asia to advance central bank investments in green bonds. He is likely to take a stronger interest than Weidmann in bringing sustainability principles to other aspects of its monetary and investment policies.

He will use his internal Bundesbank knowledge and popularity with staff, as well as IT experience, to make the German central bank a pioneer in digital modernisation. This could entail slimming staff members in line with productivity improvements. The Bundesbank employs 10,400 people, barely changed over the past 15 years, despite devolving monetary policy to the ECB. The Bundesbank’s staff benefits – including generous creche facilities – add sizably to its credentials as an employer. Although the numbers are not fully comparable, the Bank of England, in charge of UK monetary policy, employs 4,600 people.

Nagel will deploy his financial knowledge and international expertise in pointing out harmful distortions on markets caused by persistent QE. This view is widely shared by financial professionals, not only in Germany.

He will provide much needed drive to the campaign to forge European capital markets union, a goal espoused both by Scholz and Jörg Kukies. The former Goldman Sachs banker, who was finance ministry state secretary for three and a half years under Scholz, has become Scholz’s main economic adviser in the Berlin chancellery. Kukies has united under his wing the previously separate economics and European departments of the chancellery, adding the energy portfolio to the mix, in a move towards centralisation that Scholz believes will improve the effectiveness of German economic policies. The Nagel-Kukies relationship will be seen as a crucial policy-making lever. The new Bundesbank president may have to work hard to guard the Bundesbank’s vaunted independence.

Nagel supports intensifying Frankfurt’s links with Chinese financial markets, a goal that may have to take a back seat, at least for the time being, because of political tensions.

Nagel is likely to test more direct communication with the German public. Weidmann, a former Bundesbank economist and policy adviser to Chancellor Angela Merkel, had to soften his normally hawkish message in 2018-19 when he was bidding to take over from Draghi as ECB president from November 2019. The effort was doomed to failure as French President Emmanuel Macron made clear all along – including to Merkel – that he would block Weidmann on account of his earlier opposition to QE. In the end, in a Macron-steered operation, the job went to Lagarde.

Despite the Bundesbank’s much-trumped freedom from political interference, the central bank’s leadership has often coincided with German electoral cycles, with terms in office frequently truncated by political turbulence. Karl Klasen, the autocratic former Deutsche Bank chief executive, president in 1970-77, was a close friend of Chancellor Helmut Schmidt. West Germany’s 1970s leader chose his confidant and fellow SPD member Karl Otto Pöhl, the ebullient finance ministry state secretary, to join the bank in 1977 and take over the reins in 1980, a highly fraught period for the German economy.

When Welteke was forced to leave in 2004 in a politically motivated upset, Schröder and his Finance Minister Hans Eichel disagreed over the succession, leading to a messy candidature tussle. Axel Weber, an economics professor and adviser, previously little known outside expert circles, emerged from a field of four other possible successors to become president for seven years. He left one year early in 2011 after Merkel gave him insufficient support to become ECB president after Jean-Claude Trichet. Weber went on to head Swiss bank UBS and Merkel’s confidant Weidmann took the helm.

Compared with past Bundesbank controversies, the Weidmann-Nagel succession has been been relatively straightforward. With German inflation at 6%, choosing a more experimental figure without Nagel’s stability-minded ‘safe pair of hands’ reputation would be, for Scholz and the rest of the government, a high-risk option.

Isabel Schnabel, the German academic who has been ECB board member for two years in charge of the bank’s market operations, earlier thought to be a contender for the Bundesbank post, was rejected owing to her relative lack of experience. Additionally, France, Italy and other euro area members have voiced discreet irritation at how Schnabel’s three German ECB board predecessors in the past decade have all quit prematurely, making it essential that she fulfils her eight-year term.

There had been speculation that Schnabel, had she become the Bundesbank’s first female chief, was being readied to take over from Lagarde when the ECB president’s mandate expires in 2027. With Nagel now due to move back to Frankfurt from Basel, there may be talk – which he will be anxious to quell – that Nagel, at the comparatively youthful age of 61 in six years, could take over from Lagarde. That is still a long way down a road that, for the Bundesbank and its new chief, is likely to be undulating and arduous.