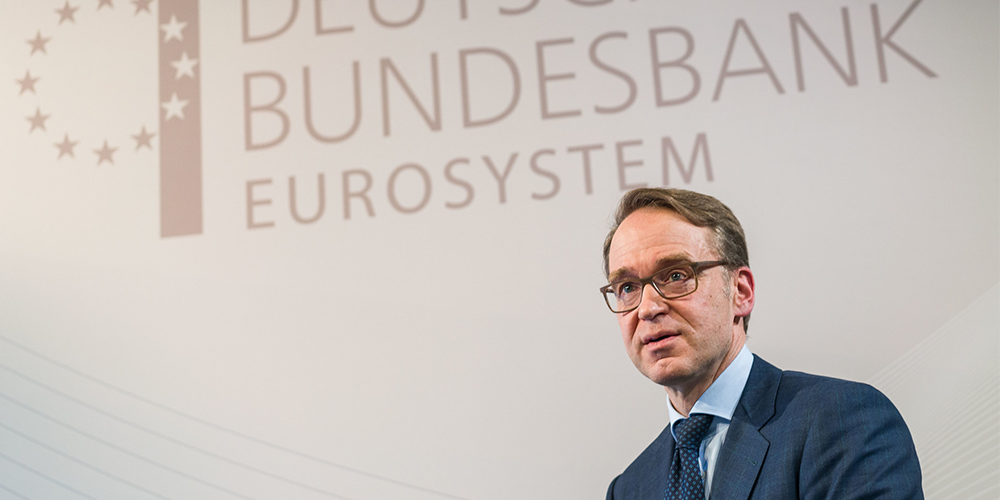 ‘He’s going at the same time as Merkel. This is a political decision.’

Germany’s difficult coalition-building process has gained fresh complexity following the announcement of Jens Weidmann’s resignation shortly before the European Central bank takes far-reaching decisions on its expansive monetary policy. The departure of the Bundesbank president, unofficial leader of the ‘hawks’ on the ECB council for more than 10 years, is scheduled to take place on 31 December. The decision enshrines expansionary policies as the ECB’s preferred mode for the foreseeable future.

The timing, coinciding with the departure from office of his former boss, Chancellor Angela Merkel, will open decisions on the Bundesbank succession to possible squabbling among coalition partners of likely Chancellor Olaf Scholz. The current finance minister, from the Social Democratic Party (SPD), is trying to form a new government before Christmas. This would be the first SPD-led administration since 2005, marking a decisive break from 16 years of rule by Merkel’s conservative Christian Democrats, the last eight years in coalition with the SPD.

Although his bowing-out will be politically controversial in Germany, a veteran ECB official said it was an ‘elegant’ way of marking a new chapter in ECB-Bundesbank relations.

Weidmann’s most probable successor is Claudia Buch, a low-key economics professor who has been his deputy since 2014. Her promotion would match Scholz’s campaign to bring more women into front-line economic jobs. However other SPD leaders may favour a higher-profile, more political choice, such as Marcel Fratzscher, a well-respected former ECB official who heads Germany’s left-of-centre DIW economic research institute. Jörg Kukies, state secretary in Scholz’s finance ministry, a former Goldman Sachs banker, would be another prominent candidate.

Additionally, the Free Democratic Party and Greens, likely partners in Scholz’s putative ‘traffic light’ coalition, will wish to influence the choice both of Weidmann’s successor and of a possible new member of the Bundesbank board if the post is filled from within that body.

Weidmann’s exit focuses attention in Germany and beyond to growing antipathy between ECB policies of near-permanent monetary easing and the tighter stance habitually favoured by the Bundesbank and conservative German mainstream economic opinion.

According to one long-time Bundesbanker who knows Weidmann well, ‘The timing of the decision is a surprise, but the decision itself is not. He has made no secret of his opposition to the expansive policy the ECB is following. Over the longer term it was impossible to keep up this position. He’s going at the same time as Merkel. This is a political decision. It is taking place at a time when Germany has 5% inflation driven by a massive monetary overhang.’

‘He knows how little influence the Bundesbank president and Germany itself has on decisions taken by a majority of the ECB council. The decision-making is driven very strongly by Italy and France.’

Weidmann’s decision to step down after only two and a half years of his second eight-year term makes him the fifth consecutive German ECB governing council member to resign before the full completion of their term. Weidmann was previously Merkel’s chief economic adviser in the German chancellery. His decision bears some resemblance to Bundesbank president Axel Weber and ECB chief economist Jürgen Stark’s resignation seven months apart in 2011 in protest at the ECB’s easing policies aimed particularly at shoring up weaker members of monetary union. Both Weber (now chairman of Swiss bank UBS) and Stark have recently strongly criticised the ECB’s continued accommodative stance.

The Bundesbank says the 20 October announcement reflects 53-year-old Weidmann’s long-time consideration of his future career path. This follows his failure to become Mario Draghi’s successor as ECB president in November 2019. The official announcement paid tribute to ‘the open and constructive atmosphere’ at the ECB under Christine Lagarde, the new president, ‘in the sometimes difficult discussions of the past years’.

Weidmann’s frustration at his permanent membership of a ‘structural minority’ on the ECB council was a major element behind the decision. During his bouts of opposition to ECB policies, Weidmann fell out with both French President Emmanual Macron and with Draghi, now Italian premier. However frustrating this role may have proven, it was an indispensable one: his willingness to champion hawkish opinions while playing along behind the scenes was important in legitimating the decision-making processes of European monetary policy.

The Bundesbank has gradually become resigned to extension beyond March 2022 of the ECB’s €1.85tn pandemic emergency purchases programme of government bond-buying, under a decision due on 16 December. Although monthly PEPP bond-buying has fallen by €5bn a month from the €80bn earlier this summer, this is a long way short of the much sharper reduction favoured by Weidmann and other advocates of tightening on the ECB council.

Other favoured women who might be in line for the top Bundesbank job or a post on the bank’s board are Isabel Schnabel, member of the ECB executive board, and Bettina Stark-Watzinger and Katja Hessel, both FDP members of the Bundestag, the former and current chairs of the Bundestag finance committee. SPD-favoured Sabine Mauderer, the member of Bundesbank board responsible for sustainable finance, would be another possible candidate.

German members of the governing council have had chequered experiences. Stark’s immediate successor on the ECB board, Jörg Asmussen, widely regarded as an ally to Draghi in pursuing monetary easing, resigned in December 2013 – less than two years into his term – to take up the position of deputy labour minister in Merkel’s third government. In September 2019, Asmussen’s successor on the ECB board, Sabine Lautenschläger, abruptly left her post in a sign of backlash over a new round of monetary policy loosening announced a few weeks earlier. The new policy package, which included an interest rate cut as well as a resumption of asset purchases at a time of prolonged low inflation, opened unprecedented divisions within the ECB’s governing council.

Nine members of the 25-person council were against the package; central bank governors from France, Germany, the Netherlands and Austria publicly spoke out against the measures, undermining ECB cohesion. At the time, Weidmann said the new measures ‘overstepped the mark’ and were out of proportion with the euro area’s economic environment. Lautenschläger had recently finished her term as vice chair of the ECB’s single supervisory mechanism. She was replaced on the ECB board by Isabel Schnabel, seen as much more in line with both Draghi and his successor Lagarde.

Weidmann’s departure comes as François Villeroy de Galhau, governor of the Banque de France, nears the end of his own term. While the latter is expected to be reappointed, possible openings at the top of the two most powerful national central banks will create significant uncertainty in Europe’s macrofinancial architecture.

David Marsh is Chairman of OMFIF. Pierre Ortlieb is Head of Policy Analysis, The OMFIF Institute, Economic and Monetary Policy.