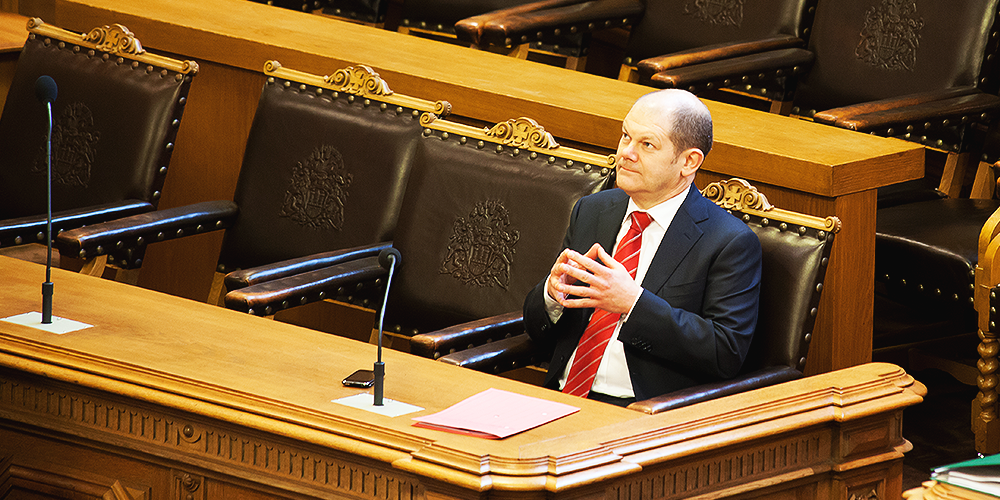 Quiet man from Hamburg with a touch of Atlee and Delors

Nothing has been decided. As was clear before the election, he faces abundant challenges. In weeks of coalition negotiations, where many complexities and hurdles remain before the job is confirmed, Scholz has to forge a ‘traffic light’ alliance with partners seemingly poles apart on key issues: the Greens, finishing third in the election, and the fourth-placed liberal Free Democratic Party. Scholz must shepherd them into overcoming divergences on budgets, investments and industry, consolidating common ground on Europe, and engineering an intelligent fusion of climate mitigation policies after Merkel’s years of muddle.

In understated Hanseatic mould, Scholz is tailor-made for Winston Churchill’s description of Clement Atlee, the unpretentious post-1945 British Labour prime minister: a modest man with much to be modest about. But he brings, too, a touch of the reluctant visionary displayed by Jacques Delors, the 1980s French finance minister and later European Commission president – a man whose most bloody fights (as well as with Margaret Thatcher) were with his own Socialist party.

Scholz will have to counter the SPD’s left-wing, which disliked him enough to turn him down as chairman in 2019. If the CDU and its CSU Bavarian allies go into opposition after slumping to their lowest-ever share of a federal vote, he will face frontal assault in the Bundestag particularly on European issues.

Christian Lindner, the FDP chairman, king-maker in forthcoming coalition talks, has made clear that his first preference would be a ‘Jamaica’ alliance with the CDU/CSU and the Greens. But as the scale of the CDU/CSU reversal sinks in, Armin Laschet, the hapless CDU chairman and chancellor-candidate, for all his bravado on election night, will need to accept the voters’ verdict and retreat into the political backwaters.

There is one big plus favouring relatively speedy coalition-building. This should contrast with the five-and-a-half months needed for Merkel’s last government formation in 2017-18. Robert Habeck, the Greens’ co-chair with Annalena Baerbock, who led the Greens’ campaign but achieved a disappointing result, has emerged victorious in the party’s post-poll internal restructuring. A friend of Lindner, Habeck will be deputy chancellor in a future coalition. The constellation should help the two decide who should take the finance ministry post they both want. Lindner is certain to make acquisition of the finance ministry a prime condition for FDP participation in a Scholz-led government. This would imply a major ministerial role for Habeck perhaps as energy czar, with the foreign ministry going to Baerbock – an outcome which could be controversial for parts of the SPD.

Presuming he weathers coalition bargaining and ends up as only the second German finance minister (after Helmut Schmidt) to become chancellor, what will be Scholz’s priorities? He must tackle five big tasks.

1. Pressing ahead on Europe

Scholz will need to rebuild a consensus on next steps for banking union which he tried to pull off as finance minister, especially on the vexed issue of common deposit insurance for European banks. Scholz will put his weight behind consolidating the European Union’s borrowing programme for the next generation recovery fund, sidestepping any CDU/CSU concerns about its permanence. Scholz’s first visits will be to Paris and Rome: a Franco-German-Italian three-cornered alliance may be in the offing, as long as Prime Minister Mario Draghi remains a pivotal figure. When Scholz became finance minister in 2018, he sent Jörg Kukies, state secretary for international monetary affairs, to Rome to show Germany takes Italy seriously. Underlining Germany’s European priorities, Scholz will probably give UK Prime Minster Boris Johnson a wide berth for the moment. If he becomes chancellor, Scholz will benefit from similar pro-European commitment from the Greens and FDP. Although they disagree on some of the means to achieve it, both parties agree on the need for a federated Europe.

2. Reconciling FDP and Greens on taxation and spending

Scholz has to align the FDP’s desire for tax cuts with the Greens’ desire for tax increases to fund heavy investment in ecological measures, ‘green’ infrastructure and decarbonisation. The Greens are in favour of a wealth tax on assets above €1m – even though this cannot be enacted federally because such taxes are the prerogative of the German states. In their manifesto, the Greens call for reform of the constitutionally enshrined debt brake which is supposed to limit the structural federal deficit to 0.35% of gross domestic product. The Greens recognise that – faced with opposition from the CDU/CSU, FDP as well as the far-right Alternative for Germany – acquiring a two-thirds parliamentary majority for cancelling the debt brake is impossible. Instead, the next coalition can be expected to agree better depreciation incentives, public-private partnerships and off-balance sheet funding to help fund much-increased investment especially for renewable energy, railways and other infrastructure. Government officials acknowledge that ‘financial engineering’ will be the key to circumnavigating the debt brake and ensuring a de facto expansive fiscal policy.

Failure over climate change has been a major strategic shortcoming. Since 1990, Germany has reduced its emissions/GDP ratio (using purchasing power parities) by less than China, as well as the UK. The post-1990 reunification conversion of heavily polluting east German industry should have hugely boosted Germany’s carbon mitigation efforts relative to other countries. But this has not happened, mainly because Germany has phased out coal-burning power stations more slowly than others, accelerated the nuclear shutdown, and been slow in building renewable energy plants and necessary grid networks. Speeding up the latter, through accelerated planning and approval procedures, is a major priority, but will be problematic. The Greens will be adamant in demanding remaining lignite plants close by 2030 rather than 2038. To force the anti-carbon dioxide transition, the party wants to raise the carbon price to a minimum of €60 a tonne and to increase the tempo for abandoning the internal combustion engine and building a hydrogen economy – revolutionary steps for the SPD with its roots in Germany’s industrialised economy. The FDP and Greens may agree more than many realise. The FDP manifesto mentions carbon dioxide 37 times, only two fewer than the Greens.

The SPD, Greens and FDP can agree on greater humanitarian protection for refugees, as well as on ways for appropriately qualified persons to enter the workforce. The SPD and Greens wish to raise the minimum wage to €12 an hour, arguing that the better-off have fared more favourably under Covid conditions. Discord with the free-market FDP on this issued can be headed off by making introduction subject to conditions set down by a minimum wage commission, foreseeing a non-disruptive phase-in for sectors that could otherwise suffer reduced profitability. Reconciling the Greens’ and SPD’s regard for enhancing lifestyles of lower-income sectors with the FDP’s leaning for helping entrepreneurialism will be a major challenge. In view of Germany’s poor demographic structures (in spite of increased immigration of younger potential entrants to the workforce), reforming pensions is another important task that could sow discord. The FDP wishes to introduce a capital market-funded pension system that could reduce the importance of state schemes and divert finance to private-sponsored models –controversial for many on the left. Although not opposed to pension reforms, many Greens would be highly suspicious of privatised pensions.

5. Finding a policy balance between China and the US

Although it has played a negligible part in the election campaign, foreign policy could provide one of the most intractable parts of Scholz’s multiple conundrums. As a large open economy much exposed to foreign trade and investment flows, Germany is uneasily aware that it can be heavily squeezed by competition and conflict between the US and China. Scholz will draw on traditional Hanseatic pro-Atlanticism to try to reinforce ties with Washington, but this may not be enough. A strong anti-American streak runs through his own party and the Greens – accentuated by growing signs, under the Obama, Trump and Biden presidencies, that the US is switching foreign policy attention from Europe towards Asia. The Greens will greatly complicate the foreign policy agenda. The party rejects Nato’s defence spending target of 2% of GDP and want a new strategic direction that takes more account of Russian sensibilities. But the Greens share US hostility to the now-built Nord Stream 2 pipeline bringing Russian gas to Germany and wish for a much less accommodative policy on China. All these issues will bring complexity to the transatlantic dialogue as well as to business links with Beijing. Extolling the possibilities for a ‘traffic light’ coalition, Scholz has praised the SPD’s past governmental alliances with the FDP in 1969-82 and with the Greens in 1998-2005. Yet both periods coincided with significant sporadic upheavals in relations with the US. If he wins the chancellorship, that experience is likely to be repeated.