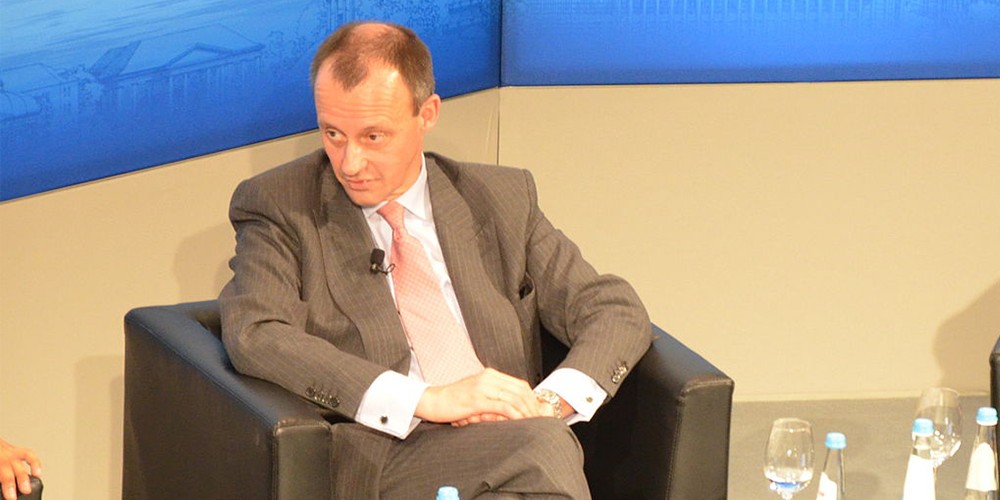 Germany needs a more market-orientated economic and industry policy to meet postpandemic challenges after Chancellor Angela Merkel steps down. The country’s new power tandem, Armin Laschet and Markus Söder, should enshrine Friedrich Merz, the German conservatives’ key economic thinker, as a pivotal figure in their team, paving the way for him to become finance minister following the 26 September general election.

Bringing in Merz – a long-time Merkel adversary who has focused on his business career rather than politics over the last decade – would bring benefits and one key threat. The no-nonsense former CDU/CSU parliamentary leader embodies forward-looking energy and industry policies, a strong grasp of climate change technology that could win over Green-minded voters and a classical anti-inflation stance promising currency stability. He has worked closely with Laschet, for example as his adviser on Britain’s departure from the European Union.

Laschet would refresh his image as a middle-of -the-road Merkel-follower unadventurously extending her 16-year reign. Teaming up with Merz – who gained 47%-48% of delegate votes in two successive party chairmanship tussles in December 2018 and January 2021 – would burnish Laschet’s credentials as an integrator in the mould of Chancellor Helmut Kohl.

The disadvantage stems from the possibility that Merz’s frequently aggressive persona could upset centrist voters and the Green party, the CDU/CSU’s probable post-September coalition partner. Merz, who turned down Laschet’s offer 10 days ago to join the CDU’s governing presidium, asked instead that he replace Peter Altmaier as Merkel’s economics minister – a bid she predictably rejected. Merz is now reconsidering joining the Laschet team. He has to weigh up the advantages of his CDU status being publicly upgraded against possible constraints on his independence.

Merz faces the drawback of never having held government office, at state or federal level. However, his hard-edged policy clarity could help the CDU/CSU overcome growing criticism of the slow progress of Covid-19 vaccinations. Jens Spahn, health minister and Laschet ally, has faced mounting pressure over the rollout of inoculations from the Social Democrats, partner in Merkel’s Berlin coalition, increasingly shifting into an opposition stance ahead of the autumn election.

A Merz front line move would further sharpen controversy on whether the government should jettison the constitutional constraint on the budget deficit, limited to 0.35% of GDP (although currently suspended because of the virus). In a disguised Merkel overture to the Greens, Helge Braun, Merkel’s stoically loyal chief of staff, this week suggested dispensing with the ‘debt brake’ – provoking a wave of criticism from the CDU’s orthodox ranks, many of whom are Merz supporters.

Spahn was seen until 10 days ago as a contender for the CDU/CSU chancellor candidature. He is now regarded as out of the running, partly because of a poorly judged conference intervention on 16 January.

Merz is backed by many company bosses particularly in Baden-Württemberg, where Winfried Kretschmann, the pragmatic Green politician, has been prime minister since 2011. The key industrial south-west state goes to the polls on 14 March, one of several regional elections before the main autumn contest. Laschet told a CDU Baden-Wurttemberg regional conference on 23 January he is a ‘Merz fan’.

Bringing Merz on board could secure a Laschet-Merz-Söder alliance. This trio could decide eventually – depending on the September election results – on the make-up of a post-Merkel German government. Laschet could stay in North Rhine-Westphalia as CDU chairman. Söder would move to Berlin from Munich as chancellor. Merz would take the finance ministry. And a leading Green – perhaps Annalena Baerbock or Robert Habeck, the party’s co-chairs – could become foreign minister.

Postpandemic economic competence will be a crucial factor in the electoral cycle. New job creation will be critical. With massive European Central Bank government bond buying continuing for another year at least, many Germans are worried about a rise in inflation, rekindling German folk memories of 1920s and 1930s excesses.

There is much talk of a European ‘transfer union’ to shore up the euro – a de facto down-streaming of wealth from north to south. Concerns have risen about a departure from economic orthodoxy in Germany itself. Under Söder’s stewardship, Bavaria has diluted traditional financial stability principles and started widespread borrowing. All this could create an opening for Merz – provided he can build a reputation as a team player and not an antagonistic soloist.