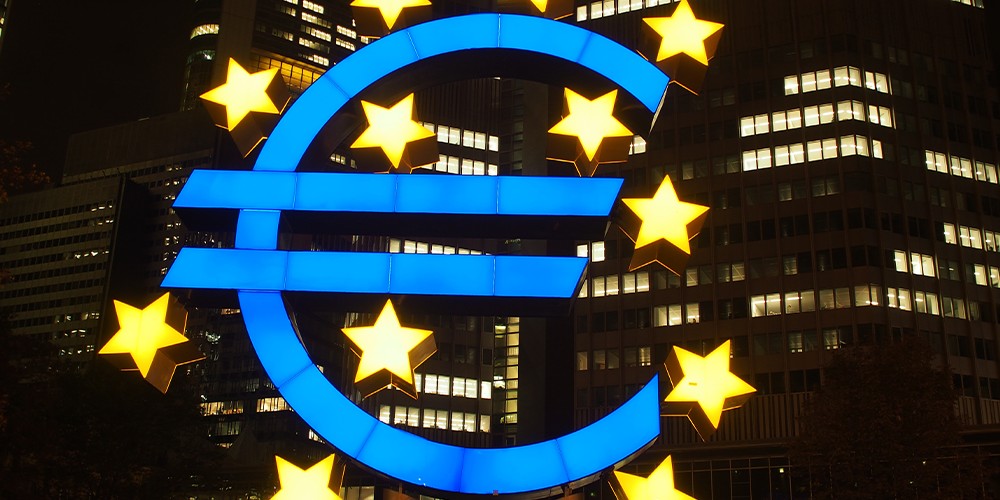 This series of OMFIF Insights explores the impact of monetary-fiscal policy coordination on central banks and their balance sheets. For more data and analysis, see OMFIF Central Bank Policy Tracker.

The tension between central bank independence, profit and loss accounting and the structure of the Eurosystem has come into the spotlight. This is due to the rise of the European Central Bank’s balance sheet and its growing exposure to often negative-yielding sovereign bonds. Added to this is the introduction of loss-making monetary policy instruments such as targeted longer-term refinancing operations.

In testimony to the European parliament in November 2020, ECB President Christine Lagarde stated that ‘by definition, [the Eurosystem] will neither go bankrupt nor run out of money… and in addition to that, any financial losses, should they occur, will not impair our ability to seek and maintain price stability.’

Lagarde’s statement was perhaps over-confident. The possibility of capital loss needs to be considered against the Eurosystem structure and the way risks are shared across it. In practice, the conditions for capital loss are unlikely to materialise. Even if they do, there are several options to manage them. More importantly, European treaties are clear that the politics of managing central bank profits should not interfere with the ECB’s mandate of preserving price stability. However, the issue of possible losses and how they are met is likely to rise in significance in future years as the Eurosystem considers normalising policies and gradually unwinding its balance sheet. 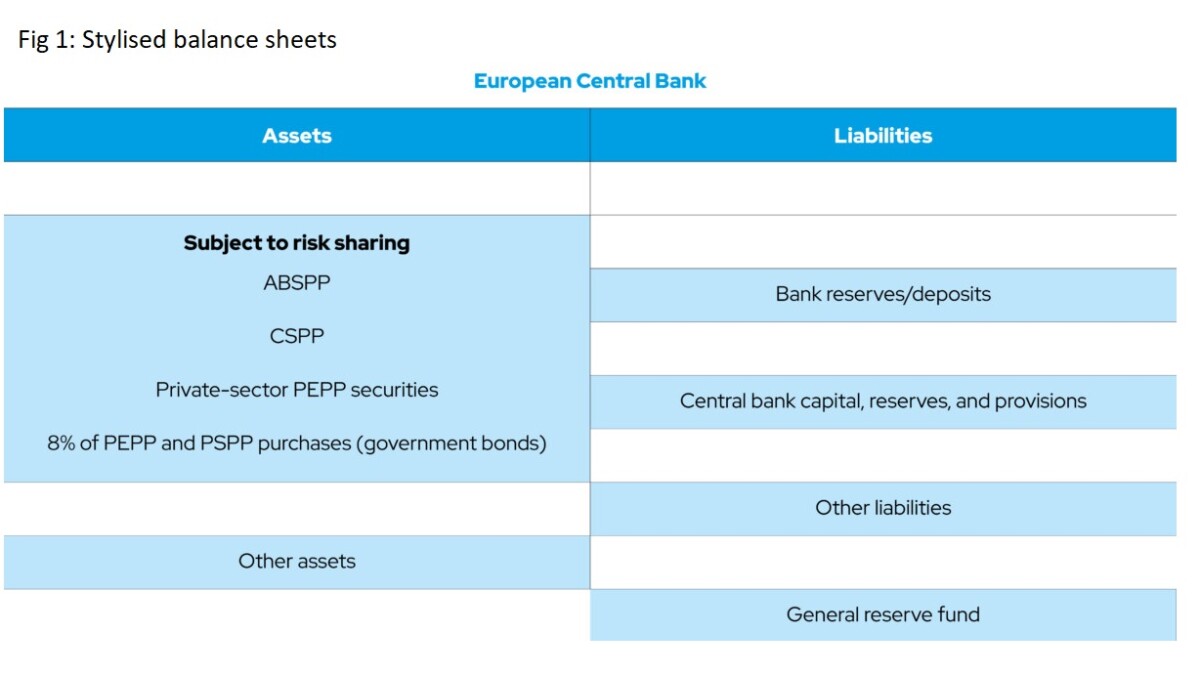 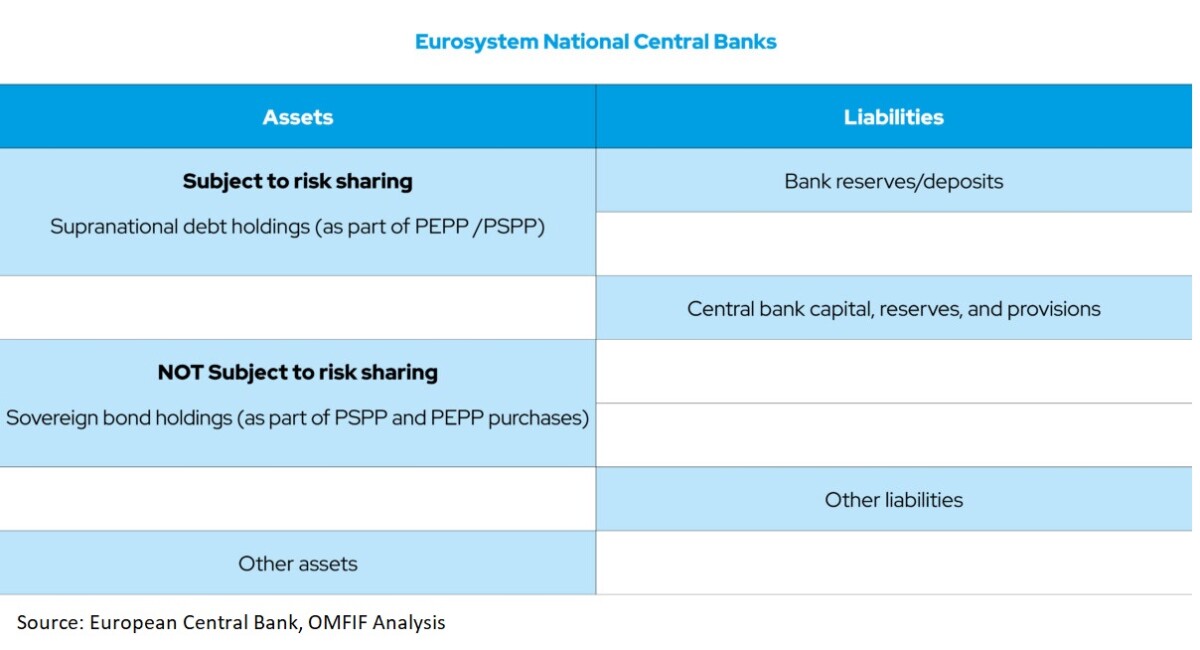 This has created a potential sovereign-NCB nexus. The riskier the assets held on the ECB balance sheet, the higher the danger. The longer quantitative easing persists, the more likely the ECB is to add riskier assets to its balance sheet. These questions will become increasingly important as and when policy normalises. Over the course of the ECB’s various asset purchase programmes, NCBs have accumulated vast portfolios of government debt issued by their own sovereign. They now hold roughly 92% of public sector debt purchased by the Eurosystem (12 percentage points of which is supranational debt), with the remaining 8% held by the ECB. All private sector debt purchased as part of these programmes is held by the ECB as well.

But there is another dimension, relating to flows between different institutions in the Eurosystem, rather than NCB stocks of government bond holdings. NCBs (and the ECB to a lesser extent) are recipients of interest payments from governments on their sovereign debt holdings. In the case of negative bond rates, the payment will flow in the other direction. At the same time, both the ECB and NCBs pay (or, at present, receive) interest payments on deposits held by governments and eligible banks. In addition, NCBs accrue some income through their monetary operations (Figure 2). 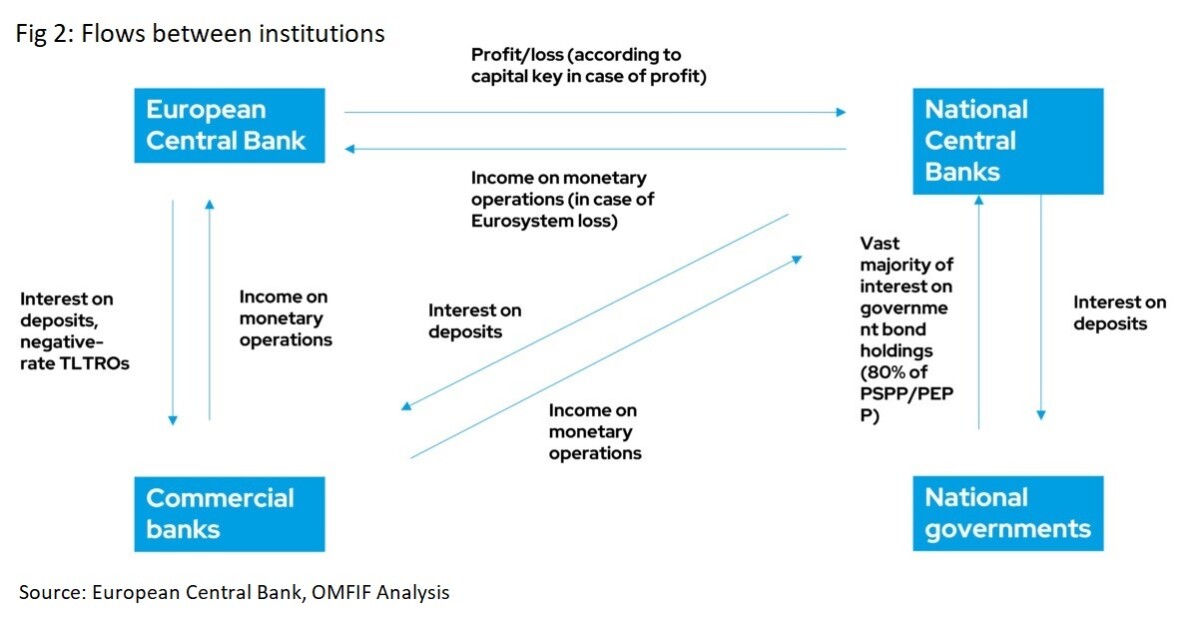 In the past, the net result of these flows has typically generated a profit for NCBs. For example, under normal circumstances, central banks can earn seigniorage through issuing money at very little cost, which is then invested in a portfolio of assets that generate a profit. The total profit of NCBs is then shared across all NCBs according to their respective capital key subscriptions as set out in protocol 4 of the Treaty on the Functioning of the European Union. The same goes for the ECB’s profits, which are shared across NCBs ‘after an appropriate transfer to the general reserve fund’.

The ECB generally accepts the benefits of adequately capitalised central banks and notes the risks of central banks losing financial independence. However, it makes clear that the objective of price stability takes precedent over any such concerns, noting that ‘the Treaty mandates the Eurosystem to implement monetary policy measures to achieve price stability, even if it results in losses for the Eurosystem or individual NCBs’. The ECB thus explicitly recognises the possibility of central bank losses. Several central banks – including those of Switzerland, Sweden, Chile and Slovakia – have operated with negative equity in the recent past.

In the context of policy normalisation, this would occur as the deposit facility rate and other policy rates begin to rise. The gap would widen between the rising cost of funds on the liabilities (with reduced interest income from the deposit facility) and the low or negative return on the assets (with interest losses on bonds purchased with fixed negative rates).

Unlike commercial banks, central banks cannot take offsetting financial measures to hedge against or prevent such losses from occurring. Instead, they have to make risk provisions. The ECB making a loss can be offset by the general reserve fund first and foremost. In the most recent annual accounts, this fund was equal in size to the ECB’s capital buffers. Failing this, the loss can be offset ‘against the monetary income of the relevant financial year’ according to the capital key. Should this be insufficient, the ECB notes that losses can be ‘recorded on the ECB’s balance sheet, to be offset against any net income received in the future,’ much in the same way the Federal Reserve has accounted for ‘deferred assets’ on its QE portfolio.

What happens in losses at NCBs is far less clear. ESCB statutes do not mandate automatic loss-sharing by the Eurosystem’s NCBs in any permanent sense, in theory leaving NCBs to bear the brunt of their losses. However, the flexibility of the legal framework as well as example of past actions suggest ways to circumvent this vulnerability. One way forward in protocol 4 of the Treaty – albeit somewhat vague – is that the ECB ‘may decide that national central banks shall be indemnified against costs incurred in connection with the issue of banknotes or in exceptional circumstances for specific losses arising from monetary policy operations undertaken for the ESCB.’

A 2009 decision by the ECB on losses incurred by the Bundesbank, De Nederlandsche Bank and the central bank of Luxembourg is instructive. These central banks recovered collateral from defaulting counterparties in 2008 (including Lehman Brothers Bankhaus AG), mostly in the form of asset-backed securities. This collateral was likely to generate a loss given its ‘limited liquidity under the present exceptional market conditions.’

In response, the ECB ruled that ‘any shortfall, if it were to materialise, should eventually be shared in full by the Eurosystem NCBs… in proportion to the prevailing ECB capital key shares.’ It is not clear whether losses on this collateral ever materialised. But the Lehman Brothers case underlines that NCBs’ willingness to share losses may be greater than often realised.

Clearly, the stocks and flows resulting from asset purchase programmes may impair the Eurosystem’s profitability, as a result of default risk on euro area sovereigns as well as interest risk resulting from balance sheet mismatches.

How do central banks manage these risks? This is the question we turn to in the second part of this article on 28 January.

Danae Kyriakopoulou is Chief Economist and Director of Research, Pierre Ortlieb is Economist at OMFIF.