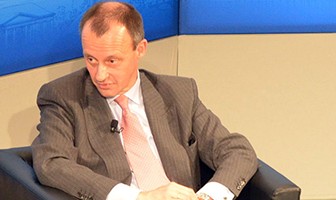 Germany has a new leader in waiting. Friedrich Merz, long-time Christian Democratic Union rival to Chancellor Angela Merkel, is moving into pole position as her most probable replacement, with strong support from German industrialists disillusioned with the mainstream politicians at the helm of the country’s lacklustre ‘grand coalition’ with the Social Democratic Party (SPD).

In a forceful and detailed speech to the CDU economic council in Berlin on Tuesday night, calling for an ‘Agenda 2030’ to restore German economic health, Merz signalled his political resurrection, six months after being narrowly outvoted from becoming party leader and Merkel’s political heir.

That defeat now looks more like victory. Annegret Kramp-Karrenbauer, the former Saarland premier who won the party contest against Merz, has failed to gain leadership stature. This has stoked speculation that she will not be enshrined to succeed Merkel in the next scheduled parliamentary elections in 2021.

The coalition in power for all but four years since 2005 under Merkel as chancellor has increasingly run out of steam. Many in the SPD are eyeing a break before the next elections to allow the party to re-establish itself in opposition ahead of a nationwide poll. With internal SPD divisions growing, there is a strong feeling that a coming coalition breakdown could spark early elections, unusual in Germany, possibly towards the end of this year.

Merz, a former head of the parliamentary CDU group, was ejected following Merkel pressure in 2002 and left politics 10 years ago to pursue a lucrative career as a business lawyer. He is a committed European who has won the support of Social Democrats such as Hans Eichel, former finance minister.

Merz is doing his best to win over disappointed business-friendly Social Democrats. On Tuesday he pointedly praised the ‘great success’ of Gerhard Schröder, former SPD chancellor, who revitalised German economic and social policies with his Agenda 2010 at the start of the millennium.

Chairing the German activities of asset management firm Blackrock, Merz claims still to be outside politics. But, after Tuesday’s tub-thumping speech, delivered as freshly elected vice-president of the economic council, that pretence is wearing transparently thin.

Merz underlined the council’s formal independence from the CDU and ability to formulate policies opposing the government’s. Without mentioning Merkel by name, he launched into a frontal assault on her stance on energy, the environment and climate change, economic and social affairs and Europe. He said Germany might lose an international economic and political ‘cultural struggle’ with China.

His rapier-like criticism of government proposals on emission limits and endorsement of staff capital participation in their employers’ firms stood in sharp contrast to the ponderous platitudes voiced earlier at the council meeting by Peter Altmaier, Merkel’s economics minister, whose job Merz has said he wants.

Declaring full-blooded support for the Franco-German alliance, Merz said Germany had failed to back President Emmanuel Macron’s call for landmark moves to complete European integration. He denounced the ‘environmental populism’ of the Green party – which some in the CDU see as the party’s next coalition ally. He decried redistributionist policies adopted by the SPD youth wing as bringing back East German-style authoritarianism that would require ‘barbed wire’ to enforce.

Merz unashamedly unfurled the banner of Ludwig Erhard. Germany’s legendary post-war economics minister launched the slogan ‘prosperity for all’ to encompass his ‘social market economy’ of the 1950s and 1960s – an inclusive rallying call that, in coming political battles, Merz intends to make his own.