One small step for UK monetary policy, one giant leap for the MPC 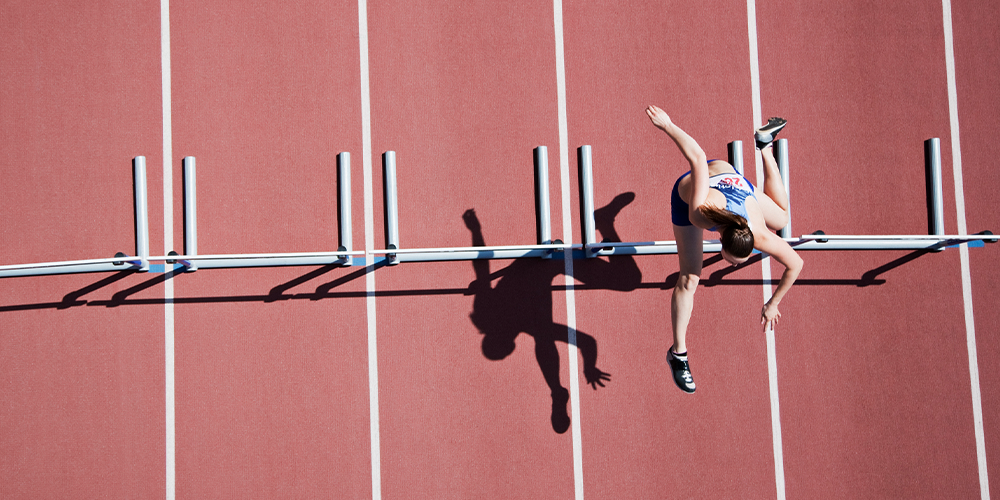 Taking some of the heavy lifting from rate hikes

By raising Bank Rate by 50 basis points on 4 August – the Monetary Policy Committee’s biggest hike in its 25 years, and the Bank of England’s highest jump since February 1995 – Governor Andrew Bailey is honouring the commitment made to an OMFIF-invited audience that the MPC ‘will, if necessary, act forcefully… no ifs and buts’ to get consumer price inflation back to its 2% medium-term target.

The rate rise, to 1.75%, was the sixth since December, but it still leaves real rates deep in negative territory (see Figure 1). When Bank Rate was last raised by 50bp, it stood at over 4% in real (consumer price index-adjusted) terms. When it was last raised by more (+100bp in October 1989), the real rate was 9%. Even including today’s move, the real rate is lower than -7%. With the Committee wanting to reclaim its cherished policy tool, further rate rises look inevitable. 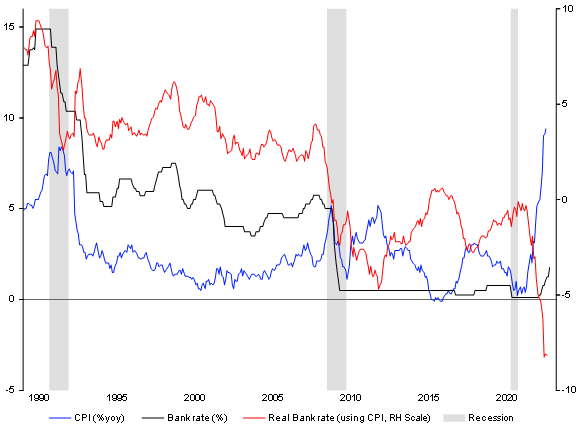 Yet, with Bailey having expected inflation to ‘come down rapidly next year’, presumably reflecting base effect, the lagged impact of the cumulative 165bp rate rise so far and slower growth, there may be a limit to these hikes. The main risk is the unintended consequence of a deeper recession than the Bank projects, especially if inflation into the northern hemisphere winter proves to be more of the ‘wrong sort’: predominantly cost- rather than demand-driven.

An unfortunate quid pro quo for fighting inflation is the Bank now expects gross domestic product recession to start in Q4 2022, stretching over five quarters (about equal in this respect to the 2008-09 financial crisis), and about as deep as that of the early 1990s. This is the first ahead-of-time recession the MPC has forecast. In its May forecast, it had projected Q4 2022’s GDP fall would quickly level out, avoiding a now slightly sharper unemployment rise.

Behind the forecast changes are higher money-market rate expectations (on which the MPC’s central fan charts are based), and a sharper hit to disposable incomes from inflation. CPI inflation is now expected a little over 13% year on year this year (in part from the lifting of the energy price cap), compared with the around 10% peak projected in May.

With stagflation intensifying, the trade-off between dogmatic rate hikes and inflation reduction will look increasingly more destructive to growth, in which case higher rates (like extending quantitative easing before it) becomes more a problem than a solution. Given political unknowns, the fiscal path is now up in the air. So, to take some of the heavy lifting from rate hikes, it may be increasingly important for the Bank to pull on the other monetary lever, of ‘active’ quantitative tightening (gradually selling its assets).

Having run ‘passive’ quantitative tightening (non-reinvestments) since February, the MPC on 4 August also voted for the Bank to become ‘QT active’ from September. An £80bn first-year reduction in gilts holdings from the Bank’s Asset Purchase Facility through both passive and active QT looks likely. Given the profile of maturing gilts – no longer reinvested – over the period, this infers a sales programme (‘active QT’) of around £10bn per quarter, or roughly half-and-half the reduction from passive and active QT.

Once momentum builds for QT, it could allow Bank Rate to peak lower than otherwise. Bank Rate will remain the ‘primary tool’ of policy, but amendments to the annual QT plans could be made if, for example, Bank Rate alone looks insufficient to meeting the inflation target or, conversely, if rate hikes look overdone and/or markets look distressed.

Varying the two could give comfort the MPC is neither throwing out the baby (growth) with the bath water (rate hikes) nor falling behind the curve. And it would go some way to reducing the downside of QE, evidenced by asset price distortions, suppressed saving and funding strains on many pension schemes.

Activating the two levers in this way offers the Bank, as with the US Federal Reserve, extra flexibility that could ease some of the criticism for sacrificing growth for inflation control. And it could help set the monetary dials in a more credible way. For Bailey, this means both returning CPI inflation to target and, by reducing the balance sheet, reasserting the Bank’s independence at a time when politicians are watching.