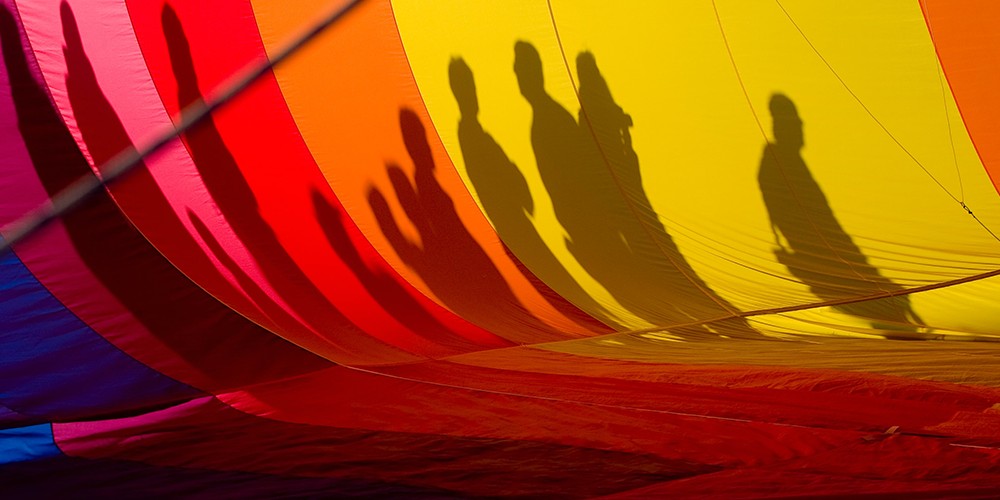 Base effects from last year’s oil price crash and bottleneck issues in freight and semiconductor markets should lift inflation above central bank targets over the next six months. Further price pressures will come as households spend their savings as lockdowns end. The question for central banks is whether inflation will fade back to the below-target trend seen over the 2010s or if we are entering a new regime, with target or above-target inflation becoming the new norm.

President Joe Biden’s $1.9bn fiscal package will take Washington’s total Covid-19 stimulus response to nearly 25% of gross domestic product. The US is on track to record its second-highest deficit since 1945, with only 2020’s being higher. After the 2008 financial crisis, many governments attempted to cut deficits while households and businesses deleveraged. It is not possible for all sectors of the economy to save at the same time, so income falls to ensure that it matches spending. As the US economy reopens the opposite will occur. The government will increase its deficit, as will households. 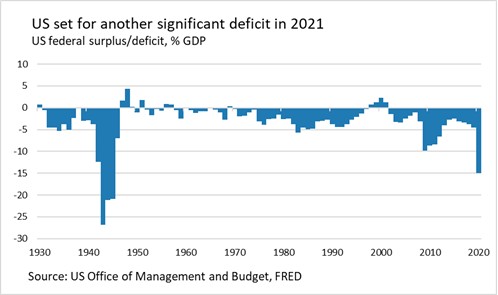 Ellen Zentner, chief US economist at Morgan Stanley, said it best in a recent must-watch OMFIF webinar, ‘We’re putting stimulus in at a time when we don’t have a balance sheet recession. That was something that dragged the outlook down for all of the last cycle, so you can have something like a larger multiplier effect coming through and more of that fiscal impulse going into the economy.’

Zentner shares the belief of most economic policy-makers that it is better to do too much than too little. The International Monetary Fund and Organisation for Economic Co-operation and Development agree, urging finance ministries to spend. This is the opposite to a decade ago and will make a strong inflationary recovery more likely than a repeat of the slow recovery from the 2008 recession.

Collective saving has also started reversing between countries as well as within them. China’s saving was the product of demographics and its export led growth model, which absorbed demand from the rest of the world. It will continue to run a current account surplus in the coming years, the difference will be that it will be caused by the US deficit rather than the other way around. As OMFIF’s David Marsh has written, China will put currency depreciation policies behind it, and as Charles Goodhart and Manoj Pradhan have said in their new book, the demographic trends of the last half century are turning from deflationary to inflationary.

The main deflationary force will be the euro area. It has achieved a partial fiscal union and changed its tune on fiscal stimulus. However, the size of its stimulus is restrained and it is doing just enough to get by, while remaining hobbled by its vaccine rollout and continued use of lockdowns.

It is not all fiscal. A part of the debate has been about the large amount of cash saved up by households over the last year. The Bank of England’s chief economist Andy Haldane expects this to lead to a sharp recovery in spending. Others, such as Sir Charlie Bean, disagree. A more important point is that there are many reasons to believe broad money aggregates will continue to grow at higher rates than in the 2010s. 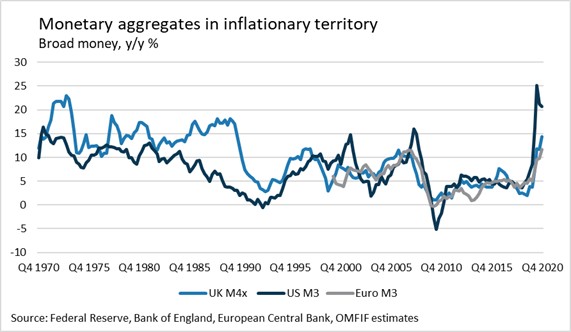 China plays a role in this, too. It stopped amassing foreign exchange reserves around the middle of the last decade and, while there will always be an international appetite for long-term US debt, that demand may be less enthusiastic than in the recent past. This means the US, and advanced economies more broadly, will rely more on the domestic banking system, including central banks and shadow banks, to mop up debt issuance.

This will happen globally as tightening financial conditions in the US spread. In attempting to keep a lid on long-term yields, issuers will focus on the short end. They can do this directly, by issuing short-term debt, or indirectly, as they are doing now with quasi-yield curve control, issuing long-term debt which central banks swap with reserves. Deficit spending financed by the banking system adds directly to broad money.

Inflationary booms are usually supported by strong lending to the private sector. The dominant form of private sector borrowing in advanced economies is mortgages, and residential real estate markets are not just healthy, they have been bolstered by post-pandemic demand for bigger properties. The UK government is especially keen to promote home ownership through mortgage schemes. 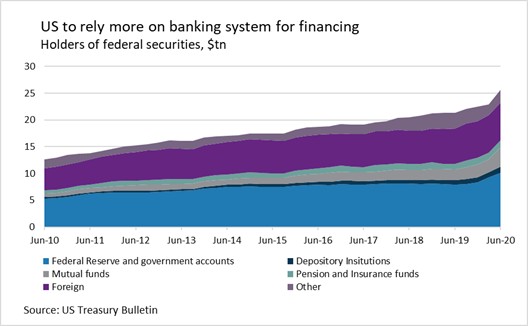 While the tide is turning, two key factors should prevent a return to the double-digit inflation of the 1970s. The first is the reintroduction of prudential requirements for banks. Since the pandemic began, policy-makers have been encouraging banks to use their capital buffers to support lending to the real economy. The Federal Reserve allowed banks to exclude central bank reserves from leverage ratio calculations, an exemption which will end this month and which will restrict banks’ money and credit creation abilities. The Fed may find a way around this or it may not and more banking activities may simply shift to the shadow banking system. Either way, the political will to generate high growth has met its match in the political will to maintain high prudential standards, which will temper the rapid growth rates seen in US money and possibly elsewhere.

The other inflation dampener will be the high level of unemployment, which may temper price pressure, but, as the 1970s and 80s showed, need not prevent it entirely.