10 reasons why renminbi will keep on rising 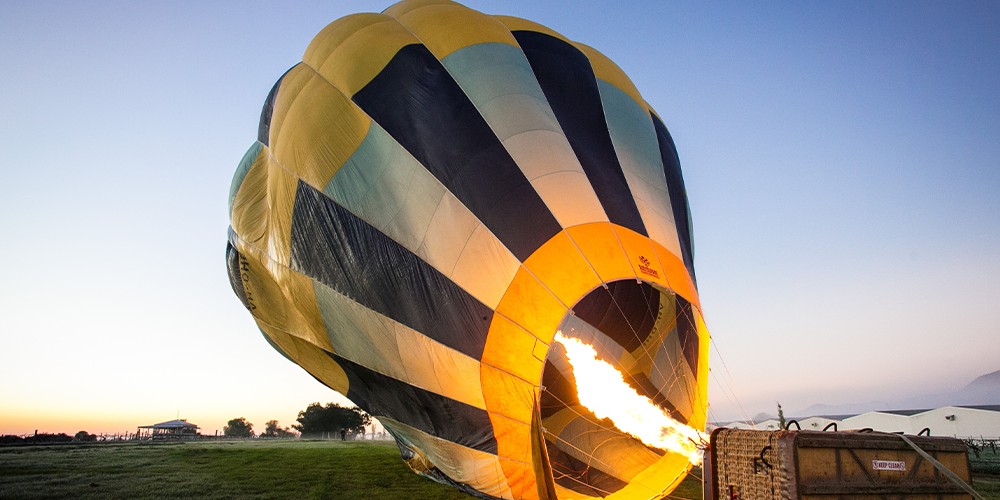 Bumpy road ahead, but room for further Chinese currency appreciation

In the months before the US presidential election, the general view took hold that, should Joe Biden win, one area of continuity with Donald Trump would be in policies on China. With the former vice-president moving into the White House on 20 January, there will be tension, even confrontation, over China’s assertive foreign policy, human rights, trade, technology and espionage. But, based on early statements from both sides, the relationship between the two major world players will be more organised, less chaotic and more stable than under Trump. Against this background, the factors behind renminbi realpolitik look positive. There are many imponderables, not least question marks over the stability of the Chinese financial system epitomised by the lack of full renminbi convertibility, doubts over productivity growth and the huge build-up of debt. There will be plenty of bumps along the way. But here are 10 reasons why the Chinese currency’s importance on the world stage – and its value – are likely to keep on rising in coming years.

China over the past 10 years has recognised the geopolitical merits of attaining reserve currency status – and this is likely to continue. As I wrote in a 2011 OMFIF paper, internationalising the renminbi ‘would set down a convincing and consistent framework for China’s financial interactions with the rest of the world, corresponding to the full potential of its political, economic and monetary ambitions.’ China did a deal with Barack Obama’s administration in 2015-16 over admittance to the International Monetary Fund’s currency basket, the special drawing right. Greater transparency (for example, over monetary reserves and other statistics) and market-opening were effectively traded for recognition as a member of the reserve currency ‘club’. Broadly, the bargain has worked, although much more needs to be done in advancing domestic market reforms. Further developments will ensue – even though it will be many years before China can come close to its long-term aim of toppling American currency supremacy.

Once again – as after the 1997-98 Asia crisis – international fears that the Chinese would attempt to seek a competitive advantage through currency devaluation have been scotched. As OMFIF authors have consistently pointed out, worries about ‘weaponising’ the currency have been overdone. Allegations that Beijing was manipulating the currency to maintain undervaluation may have been true in the past – but the period of steep foreign currency reserve accumulation ended in 2014. Compared with the period of maximum anxiety in autumn 2018 (a time of dollar appreciation) over fears the Chinese were depreciating the currency to steal competitive advantage, the renminbi has gained more than 4% on a real (inflation-adjusted) trade-weighted basis, according to Bank for International Settlements indices.

3. People’s Bank aims to be Bundesbank of Asia

The People’s Bank of China has recognised that renminbi appreciation would help control inflation as well as foster a planned shift in economic focus away from external and towards domestic demand. As OMFIF US Chairman Mark Sobel has written, ‘Its policy, particularly after the 2005 revaluation, was to move to greater market orientation.’ This has been part of a long-term drive to gain political and financial clout; Beijing officials have spoken about making the PBoC the ‘Bundesbank of Asia’. Following previous clear undervaluation, BIS statistics (see chart) show that the currency has risen 40% in real trade-effective terms since the 1997-98 Asian financial crisis and 28% since the 2008-09 upset – significantly outperforming all other reserve currencies. The pace of appreciation will slow – but the legacy is likely to prove long-lived. 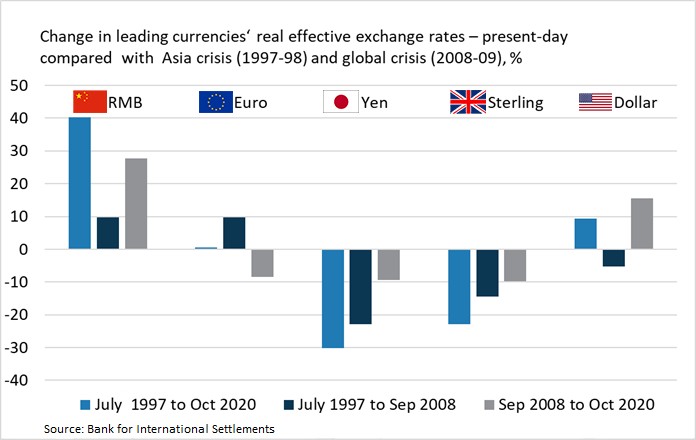 Although at the heart of the Covid-19 outbreak, China is the first major economy to escape from this year’s severe downturn. It will be the only big country recording economic growth this year, at around 2%. It offers investors a positive interest rate and the prospect of some currency gain. The economy expanded 4.9% in the third quarter, and is headed for further normalisation in the final three months of 2020, avoiding the second wave of the disease that has sparked renewed fears of recession in Europe and other regions. This has allowed officials such as Yi Gang, PBoC governor, to exude strong elements of self-satisfaction: ‘China’s continued recovery will benefit the world.’ This year’s growth has, however, been strongly export-led – a negative factor for the world economy, countering the effort to gear Chinese growth more to domestic demand. Veteran China-watcher Michael Pettis, in an OMFIF podcast, says it is running a trade surplus of 6% of GDP, a level he calls unsustainable.

5. ‘Trade wars’ with the US have led to export boom

China appears to have profited from ‘trade wars’ with the US, while many American firms have lost out. This development has borne out scornful predictions early in the Trump administration from Chinese officials and some foreign trade experts that the president’s policies would ‘make China great again’. China’s 2020 foreign trade surplus with the US is likely to be around $310bn, only a little lower than the $346bn in 2016. Chinese exports to the US in May-October 2020 were 4% higher than the same period in 2019, according to US census bureau figures, after both countries recorded steep falls in exports and imports over the previous three years. US exports to China were up 21%. In its overall foreign trade, China’s industrial growth this year has been accompanied by booming exports. Despite the rising renminbi, China’s share of global exports is now at its highest on record, according to Oxford Economics. The risk for 2021-22 is that, as the Covid effect fades, market participants could cease to regard the renminbi as a one-way bet and the currency could fall again as it did in 2014-16 and 2018.

US and other large asset owners, managers and banks are profiting from China opening its asset management and bond markets to allow foreigners access to what is set to become the world’s second biggest capital market. October’s four-and-a-half-times-oversubscribed $6bn China government bond offering, 15% of which was sold directly to US investors, was a signal of success. A €4bn offering in November drew €17bn worth of bids at declining yields – a further sign of Beijing’s efforts to diversify funding sources and capitalise on foreigners’ demand for higher-yielding instruments. In tandem with this foreign currency fund-raising, the PBoC has been enacting measures since August to boost allocation of renminbi assets to foreign investors. A well-functioning liquid domestic bond market is a prerequisite for further currency internationalisation – an area where China has much ground to make up. One setback causing headaches has been a series of bond defaults in recent weeks by state-owned companies, although this is part of an effort to strengthen governance among Chinese issuers.

Domestic bond market opening runs alongside efforts to increase the renminbi’s appeal as a reserve asset. The euro, making up around 20% of world reserves as the number two after the dollar, may make up some lost ground. But worries about uneven euro area recovery, negative interest rates, European Central Bank power struggles and unsteady European recovery fund progress will hamper any advance against the dollar. The renminbi starts from a much smaller base – 2% of world reserve assets, according to the IMF, double the figure three years ago – and therefore gains will be proportionately larger. Insufficient convertibility still holds it back. Probably two decades will elapse before the renminbi has a chance of overtaking the euro as the dollar’s main challenger. Yet the gap with both the US currency (61% of international reserves) and the euro is likely to shrink.

Constraints on China’s investments abroad have temporarily halted the country’s attempt to make a better return on its foreign assets – one of its strategic aims of the past decade. Beijing can be expected to seek understandings with the Biden administration to intensify beneficial technological exchanges, for example in bringing capital from both countries into high-tech start-ups. This will be important if the two countries stake out common ground on investments countering climate change. China’s stock market offers foreign investors the chance to hedge their bets against overreliance on US tech firms. Access to the Chinese equity market – directly and through Hong Kong – will increase in depth and breadth. Belying talk of financial ‘decoupling’, a host of Wall Street firms – including JP Morgan, Morgan Stanley, Goldman Sachs and Citicorp – has been allowed to take control of their securities operations in China. Chinese companies’ share listings in the US have accelerated during the Trump presidency. This may gain further momentum under Biden. Big questions remain on whether the US and China reach agreement on auditing issues for US listings, and whether the US forces Chinese companies to delist for failure to meet US securities law requirements.

The 11th hour November move to suspend the $37bn listing of Ant Group, the financial technology conglomerate set up by entrepreneur Jack Ma, was widely interpreted as a setback for capital market development, as well as an attempt to reduce the power of China’s richest man. Despite the embarrassment for China, the Ant listing postponement may turn out to be a step forward for the country’s financial modernisation. Beijing officials hailed the decision as safeguarding investors’ interests. It was driven by a realisation that potential subscribers had not been sufficiently informed about Chinese regulators’ rulebook changes likely to significantly impede Ant’s lending business. The authorities are belatedly getting to grips with the complexities of running a modern international capital market. In similar fashion the much-publicised, ill-communicated renminbi ‘devaluation’ of August 2015 was blamed at the time for catalysing a mini-slump on global stock markets. The episode was re-evaluated afterwards as a necessary, if poorly executed, step towards a more market-orientated exchange rate framework.

The digital renminbi will be a major advance, especially for trading relations with Asian partners. The scope of a Chinese digital currency will be enhanced by the Chinese authorities’ supreme command of the economic and political system. Although worries about state control will impede some foreign usage, a digital currency will bring closer implementation of some longer-term strategic goals such the Belt and Road infrastructure initiative which Beijing officials years ago described as a means of establishing a renminbi zone in Asia and beyond. The BRI is running into obstacles, with massive Chinese lending to over-indebted emerging market economies slowing dramatically, underlined by a Boston University study, and debt rescheduling looming. However, as Gary Smith wrote in an OMFIF commentary in November, ‘Longer-term, the Belt and Road will provide the means for an expanded use of digital renminbi for making international payments, and in particular, remittances. The dollar dominates BRI trade and remittance flows. Beijing will be happy to see the renminbi have an expanded role.’ There will be Sino-American co-operation in many areas – as well as abundant power tussles. Depending on how seriously the Treasury and Federal Reserve take this issue under Biden, digital money may emerge as a notable battleground.