Is renminbi depreciation against the dollar a problem? 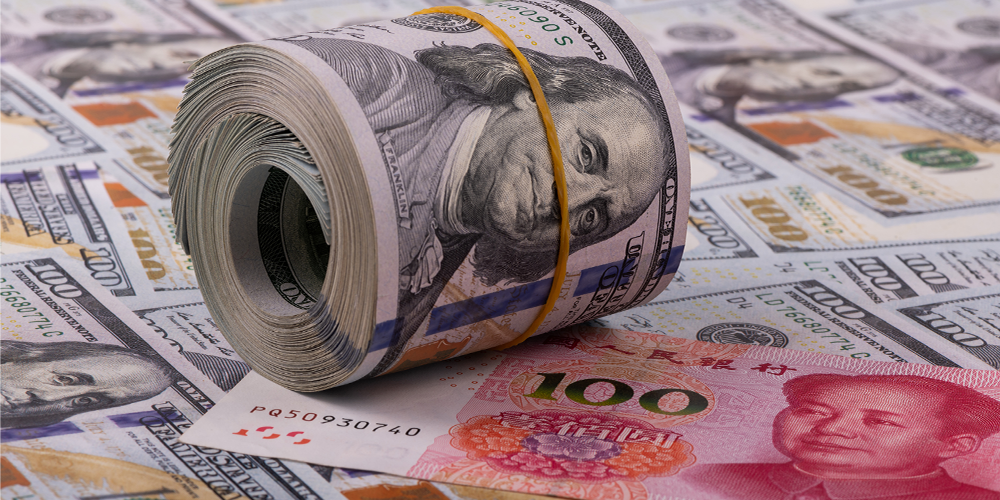 There is much less to it than meets the eye

The renminbi has been steadily falling against the dollar. It is approaching Rmb7 to the dollar, a level that when breached in 2019 prompted President Donald Trump – wrongheadedly – to order the US Treasury to declare China a currency manipulator on the spot.

Is China misbehaving? Should President Joe Biden’s administration work itself into a lather? The answer is no. There is much less here than meets the eye. Indeed, far less attention is being paid so far to recent renminbi depreciation than in past episodes of downward pressure.

First and foremost, global currency movements are largely a dollar story. The dollar is up across the board. It is up roughly 14% against the euro this year, 23% against the Japanese yen and 13% against the Bloomberg dollar index. In contrast, it is up far less against the renminbi – some 9% (Figure 1). Further, the renminbi on a trade-weighted basket is fairly flat (Figure 2).

Figure 1. Dollar not as far up against renminbi as others

This dollar story primarily reflects the Federal Reserve’s rapid shift towards monetary tightening. For example, two-year US Treasuries have risen by roughly 2.7%, close to 3.4%. China’s two-year government bonds have fallen by some 35 basis points this year, close to 2%. These sharp movements in interest differentials clearly favour dollar placements. Admittedly, given extensive Chinese capital controls, it would be hard to draw a straight line from renminbi movements to shifts in relative monetary policy stances. But that doesn’t mean relative stances don’t matter for China.

The story is also impacted by Chinese economic weakness. Whereas China was originally aiming at 5.5% growth this year, most recent forecasts are around 3% amid concerns about ongoing pandemic shutdowns, weak housing data, efforts to curb excess leverage and hesitant policy stimulus.

The weakness in Chinese domestic demand is also supporting a booming trade surplus. It was over 2.5% of gross domestic product last year, in contrast with under 1% of GDP in 2018-19. At the same time, the current account surplus is buoyed relative to its pre-pandemic size as a share of GDP – having risen from less than 1% of GDP in 2018-19 towards 2% now – in part because Chinese tourist outflows have been shut down by the zero Covid-19 policies.

Given a sizable current account surplus and a falling currency, one would expect that capital outflow is fairly significant this year. That appears to be the case. The Institute for International Finance has published data showing the recent shift to equity outflows from China (Figure 3). Capital outflow has been apparently influenced by the repercussions of Russia’s invasion of Ukraine and the economic weakness. 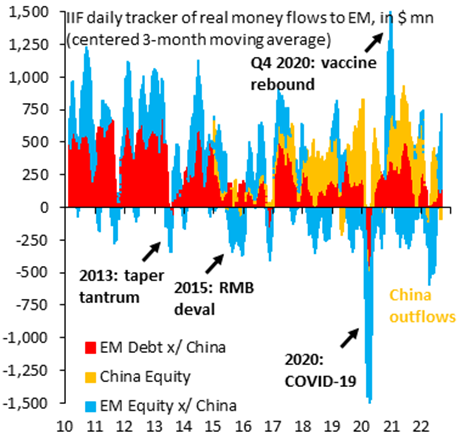 Were the renminbi to fall through the level of Rmb7 to the dollar, that should be viewed as of greater psychological than factual importance. After all, a move from Rmb6.99 to Rmb7.01 wouldn’t be a major change. That said, China is apparently already seeking to resist renminbi depreciation, before the renminbi possibly declines to Rmb7 per dollar.

Reports point to administrative guidance to banks to be cautious in selling renminbi. The People’s Bank of China has sent repeatedly clear signs at recent daily fixings that a stronger renminbi is desired. It just cut foreign exchange reserve requirements. Officials are talking the renminbi up. In 2015-16, the sharpness of renminbi depreciation triggered massive capital outflows, an event the authorities well remember and would not wish to see repeated.

It would be a mistake to view the renminbi as a free-floating, market-determined currency like the dollar or euro. While authorities often suggest they have their eyes focused on the renminbi’s trade-weighted index, it seems they also keep a close eye on the dollar as well. This means that when the dollar is rising, the renminbi falls against the dollar, but less so than others – often China’s competitors.

The authorities exert considerable sway over the Chinese banking community. The capital account understandably and justifiably isn’t open. Some analysts have suggested that movements in the net foreign asset position of the state banks have been used as a past surrogate for the central bank to curb appreciation. While this is possible, no smoking guns have been produced, and in any case the state bank asset position is now declining, which would reinforce the view that authorities wish to limit downward renminbi pressures.

There is a legacy of longstanding suspicions in the international community regarding China’s management of the renminbi and efforts to secure competitive advantage. These suspicions were understandable given past Chinese current account, reserve and/or exchange rate developments, especially in the 2000-14 period.

US sentiment against China is strong. America has qualms about ‘free and fair’ trade, and the impact of the strong dollar and relative strength of the US economy will reinforce its current account deficit. The US has legitimate grievances and national security concerns about Chinese economic practices and statism. While voices have been so far muted about the renminbi weakening, a renewed cycle of complaints about Chinese currency practices – even if wide of the mark – is within the realm of possibility.