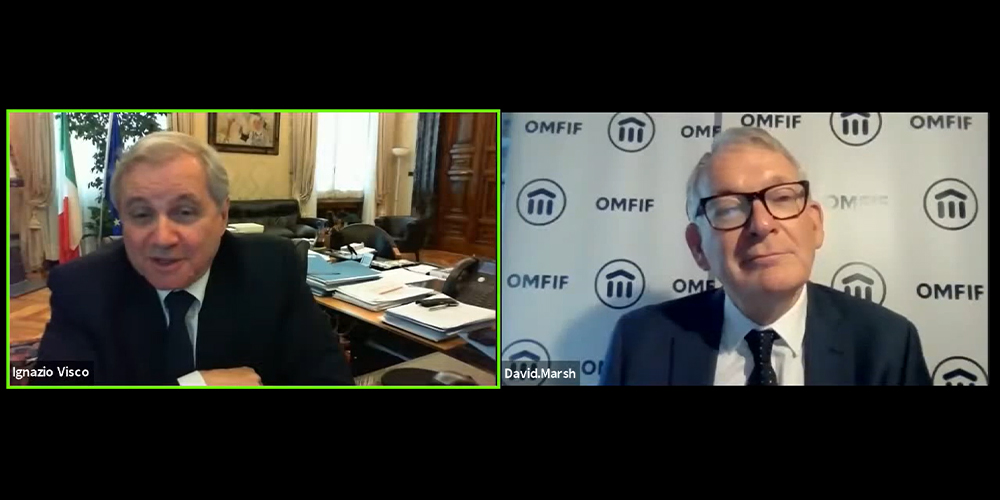 Speaking at the two-day ‘Revolutionising finance for net zero’ symposium of OMFIF’s Sustainable Policy Institute, Visco queried whether the massive growth in ‘sustainable finance’ was sustainable in view of the urgent need to close data gaps. He hinted at a concerted push by central banks to help improve misleading data that could prove fatal to sustainable finance campaigns across the world.

Visco, governor of the Banca d’Italia for nearly 10 years, is playing a major role in international efforts to spur greater co-operation in the post-Covid world economy, in view of Italy’s G20 presidency which ends on 1 December.

He said necessary increases in carbon prices would inevitably push up inflation. He repeated assertions that the current price rise spike in Europe and the US was not comparable to inflationary bursts in the 1960s and 1970s and was likely to be temporary. But he said governments would need ‘distributional’ measures to help alleviate the burden on weaker members of the population most affected by future price hikes for energy and related consumer items.

Visco acknowledged high-level G20 exchanges on climate mitigation, as in other matters, were overshadowed by political tensions between the US and China. But he praised deeper ‘trust’ between all sides in climate talks as well technical co-operation with agencies such as the People’s Bank of China.

In a symposium conversation with David Marsh, OMFIF chairman, Visco outlined a bleak perspective of a world so afflicted by ‘a lot of disasters’ that politicians would have no choice but to take more intensive action. Listing floods, heatwaves, fires and hurricanes, he drew a stark contrast between ‘terrible’ meteorological upsets and ‘unsatisfactory’ progress in curbing greenhouse gas emissions. He pointed out that the United Nations is forecasting a 16% increase in 2030 global emissions compared to 2010 levels, against the 45% reduction needed to comply with climate-mitigation targets.

Although couched in calibrated central bankerly language, his assault on data discrepancies amounts to a full-scale broadside against wilfully or unintentionally misleading issuer statements which, unless curbed, could cause great setbacks on world markets. Drawing attention to the need for ‘high-quality, granular, and internationally comparable data’ covering environmental, social and governance investment criteria, Visco said: ‘Currently, there are neither widely accepted rules for ESG data disclosure by individual firms nor agreed auditing standards to verify the reported data. Moreover, there are intrinsic difficulties in deciding which indicators are relevant in assigning an ESG score.’

‘While the three main data providers’ credit ratings assigned to the major euro area-listed companies show a correlation of above 90%, the correlation between ESG scores is much lower at 20-60%.’ Moreover, the range widened last year compared with 2019.

‘The fragility of these indicators and their lack of transparency increases the risk of greenwashing,’ Visco said. ‘Recent news on malpractices regarding ESG strategies confirm that these risks are concrete.’ He cited estimates suggesting that 55% per cent of funds labelled as ‘low carbon’, ‘fossil-fuel free’ and ‘green energy’ exaggerated their claims and more than 70% of funds promising ESG goals fell short of their targets.

Visco highlighted central banking participation in attempts at data harmonisation. He underlined the ‘important initiative’ of the International Financial Reporting Standards body in establishing an international sustainability standards board. Erkki Liikanen, former governor of the Bank of Finland,  has been chair of the IFRS Foundation trustees since 2018. Jean-Claude Trichet, former European Central Bank president, is heading a group of advisers to the new standards board in what Visco said was ‘an attempt to foster coordination among different jurisdictions.’

However, if central bankers were to gain authorisation to extend their activities further into vetting sustainable finance data, this would necessarily add to mandates which many observers believe are already over-stretched almost to breaking point.