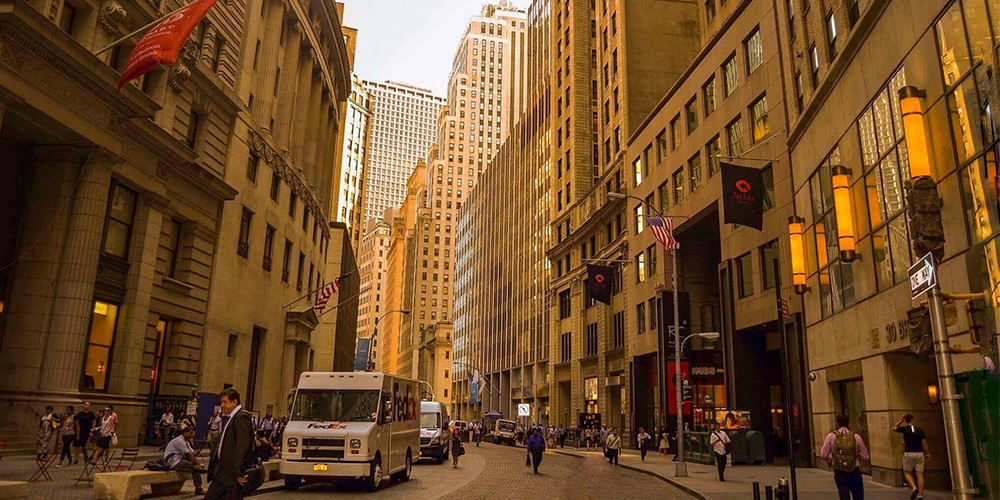 The US Federal Reserve’s series of fixes to money market plumbing since the September liquidity episode have taken effect gradually, as evident in the minutes to the 10-11 December 2019 Federal Open Market Committee meetings and overnight rate spreads.

First, the one-two punch of temporary and permanent open market operations has replenished the overall supply of reserves outstanding in the monetary system. Since 18 September, reserve balances at the Fed have grown to levels last seen in March 2019, at almost $1.7tn, up from their from their low point of just under $1.4tn. This appears to have helped alleviate the concentration and inelasticity that characterised reserves management in mid-2019, when no more than four large US banks dominated the space. 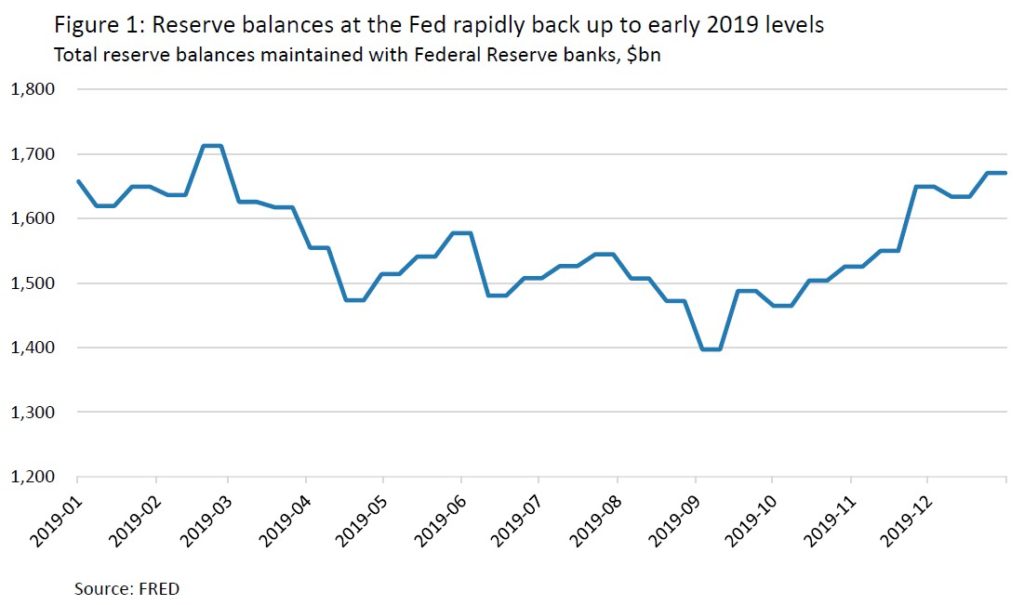 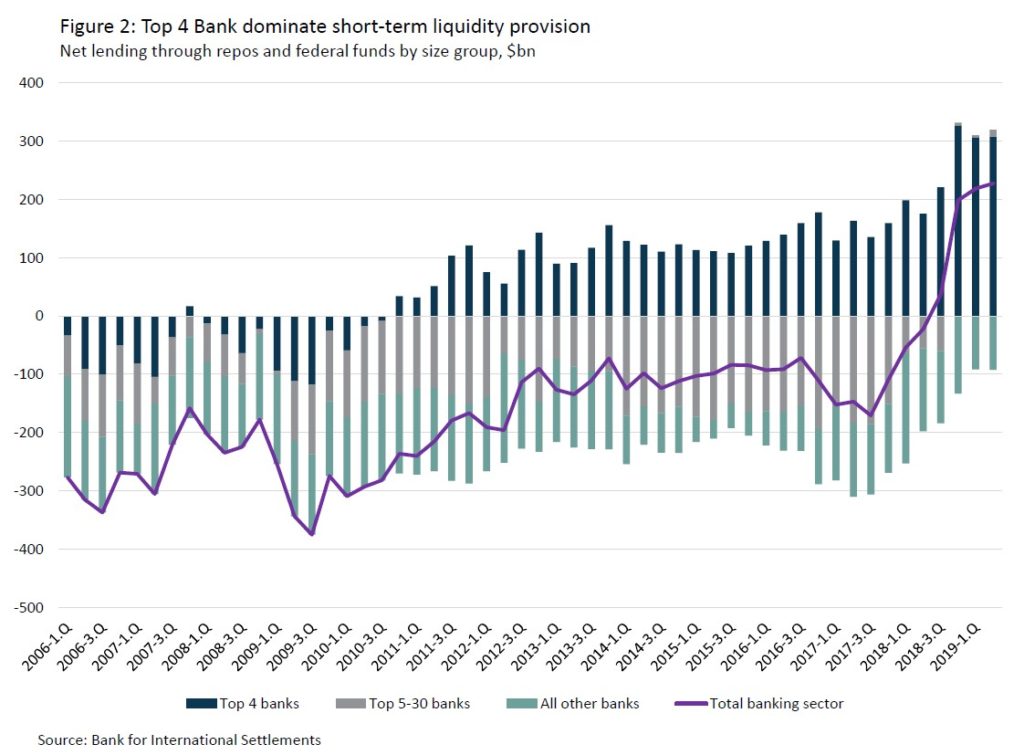 At the same time, the US Treasury’s cash balances at the Fed have stabilised somewhat. Importantly, the Fed has tweaked remuneration on its foreign repo facility, bringing it in line with the general overnight reverse repo rate. As a result, uptake of the foreign RRP has dwindled by around $60bn since its peak in September.

As noted in an earlier piece, tweaks to the foreign RRP rate have a tremendous capacity to move cash between reserves, bills, and other short-term instruments. The Treasury pursued a similar strategy (albeit in reverse, raising the foreign RRP rate) late in President Barack Obama’s administration when it sought to encourage foreign institutions to rotate out of bills due to supply constraints.

Finally, an underappreciated aspect of the gradual return to normality has been the crucial role of sponsored repo. Sponsored repo is a variety of repo wherein a large, Fixed Income Clearing Corporation-member dealer ‘sponsors’ a non-dealer counterparty and allows it to book and net a Treasury repo transaction on the FICC platform. This aspect of the repo market ‘fix’ is linked perhaps most directly to its causes.

As the Bank for International Settlements noted in its December 2019 quarterly review, ‘increased demand for funding from leveraged financial institutions (e.g. hedge funds) via Treasury repos appears to have compounded the strains of the temporary factors.’ The liquidity provided via sponsored repo most directly addresses a structural root cause of September’s episode. 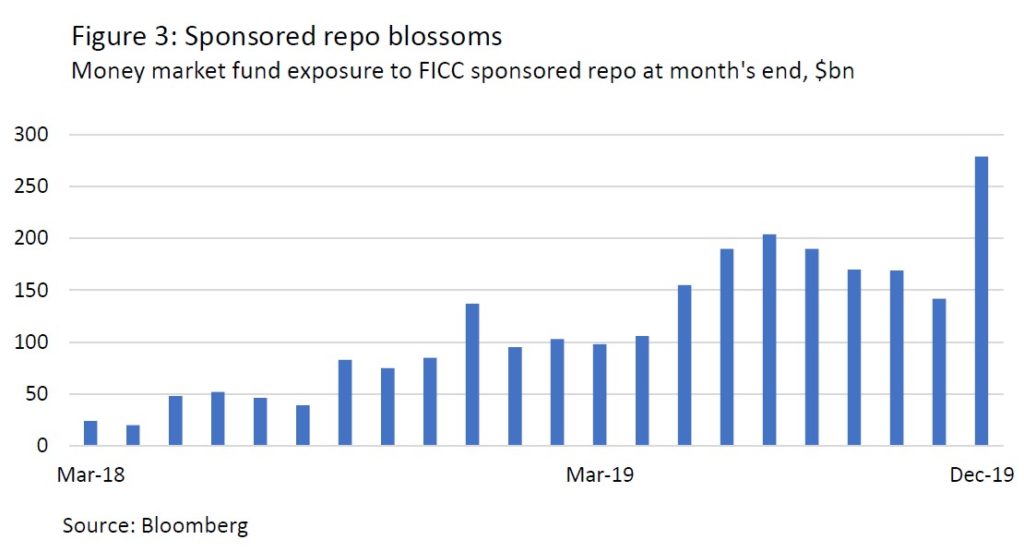 Yet two key dimensions of the Fed’s repo firefighting – massive liquidity provision and the boom in sponsored repo – are increasingly ineffective and at risk of exacerbating systemic instability.

First, the new asset purchase programme, operating at a pace of roughly $60bn a month, is projected to run into limits early in 2020, as the Fed itself has acknowledged. The minutes to the December meeting suggest that ‘future Treasury bill purchases could have a larger effect on liquidity in the bill market’ in the light of seasonal variations in issuance and the Fed’s ‘growing ownership share of outstanding bills.’

According to one estimate covered in the Financial Times, the Fed will soon own as much as 12% of the entire bill market, up from zero in the aftermath of ‘Operation Twist’, the popular name for the Fed’s maturity extension programme. The effect of the purchases is likely to become more pronounced as the outstanding pool shrinks, due to seasonal fluctuation. The following chart from the Treasury Borrowing Advisory Committee depicts the typical volatility. 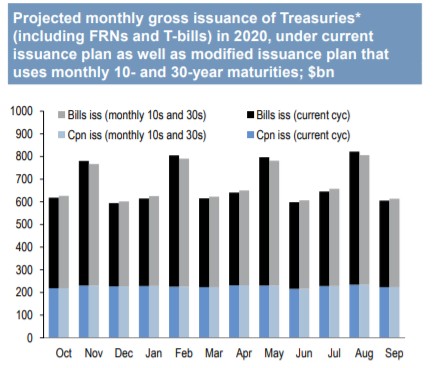 The Fed has already announced that it is considering purchases of longer-dated bonds to minimise its impact on the bill market. This amounts to a de facto taper of its bill purchases and a sort of new Operation Twist; though it is worth asking at which point the Fed would formally begin tapering the entirety of this new round of asset purchases.

Reserves have returned to their early 2019 level, and the Fed also pointed towards tapering of its temporary repo operations in the December minutes.

Look to the next set of FOMC minutes for indication as to when an appropriately ample level of reserves may be reached, as well as for more on the parameters of ‘Operation Twist 2’, including the maximum maturity of coupon purchases and the justification for longer-dated easing.

Second, the repo-clearing house-hedge fund nexus remains a thorn in the Fed’s side, and a worrying presence in one of the financial system’s most pivotal markets. Liquidity provided through temporary or permanent measures often doesn’t trickle through to smaller market players; yet as is the case with hedge funds in the repo market, they are frequently the very players that need it most.

As mentioned previously, hedge funds mostly engage in repo through the FICC’s sponsored repo programme. As such, one solution the Fed is pondering (as reported by the Wall Street Journal) is to ‘lend cash directly to smaller banks, securities dealers and hedge funds’ through the FICC. However, there are several issues with this proposal which the Fed will have to grapple with before launching on this new endeavour.

For one, it would be politically damaging for the Fed to lend to hedge funds, at a time when public trust in the Fed is at dangerously low levels. A forthcoming OMFIF global opinion poll reveals that the Fed is one of the least-trusted central banks in the developed world. Previous studies have found that it is comparatively one of the least popular US institutions. At a time of unprecedented pressure on the Fed from the public and the Oval Office, lending to hedge funds in this manner may prove an unwise move.

This proposal would keep in place the structures that allowed the September liquidity episode to take place at all. Little has been done to alleviate the structural factors – as indicated in the BIS’s quarterly review piece – that produced tension in the US repo market.

Structural power within the short-term collateralised lending space will remain concentrated among a handful of US banks, with J.P. Morgan the most important among them. And lending to hedge funds and smaller dealers through the FICC will do little to break the cycle of these highly leveraged hedge institutions as critical marginal buyers in the repo market.

Finally, this would only add to the already disproportionate systemic relevance of clearing houses, which have been burdened with the responsibility for systemic stability since the 2008 financial crisis.

Whether this is a good strategy to pursue remains an open question. The Fed needs to maintain a delicate balance of market neutrality, systemic liquidity, and financial stability, which in the present market environment may not necessarily be compatible.