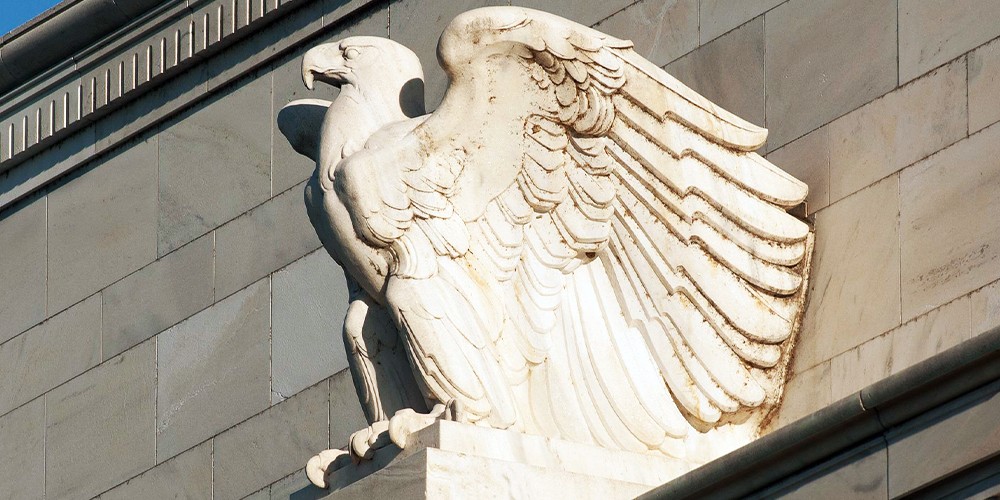 The US Federal Reserve’s key challenge for the next six months, alongside trade tensions, is managing its liabilities.

Since the 2008 financial crisis, the size of the Fed’s asset holdings has grown around fivefold, reaching almost $4.5tn in 2014 from less than $900bn in early 2008. It has since declined to below $4tn, but growth is set to resume with the Fed’s announced permanent open market operations.

In the halcyon days of the ‘great moderation’ of the 1990s and early 2000s, the Fed’s assets matched its liabilities almost entirely by currency in circulation (Figure 1). 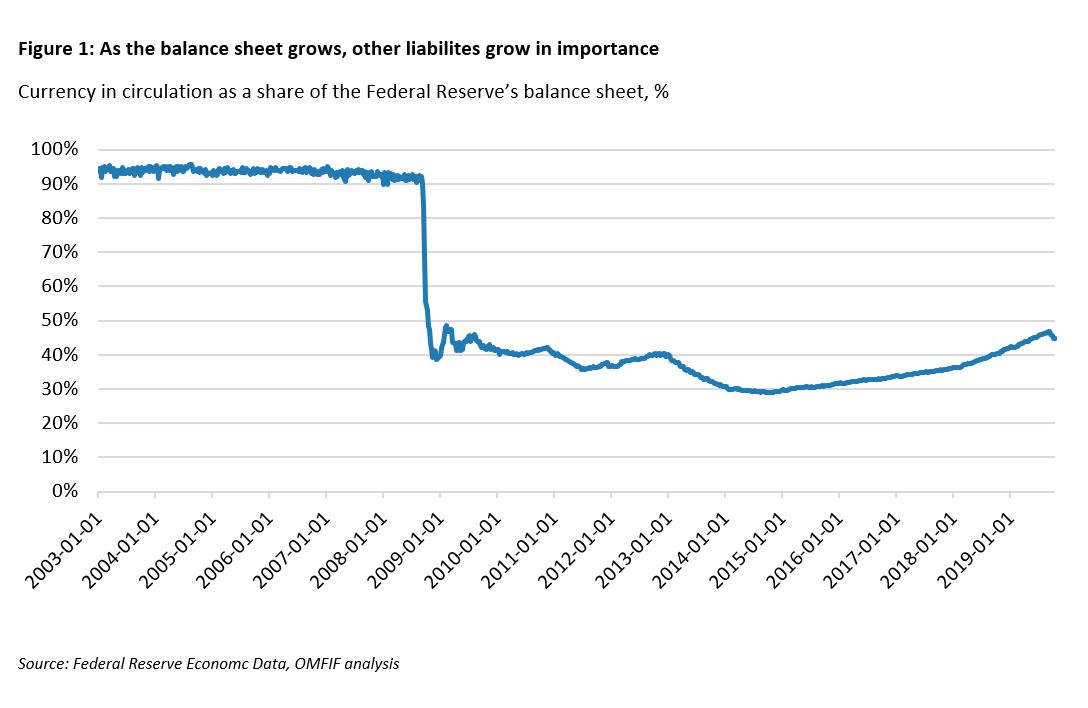 Yet for central banks, the enduring legacy of the crisis is that they are now a bulwark in money markets, and have taken on a critical role in providing overnight liquidity to the financial system. Various new lending facilities – such as the reverse repurchase (RRP) facility – and liquidity management practices now take up space on the liability side of the balance sheet. Their recent growth has precipitated a decline in the reserve balances available in the financial system.

The statement following the Federal Open Market Committee’s ad hoc 4 October meeting reads, ‘The Federal Reserve will… ensure that the supply of reserves remains ample even during periods of sharp increases in non-reserve liabilities.’ Subsequent meetings will have to address the turmoil coming from continued shifts in liability composition. 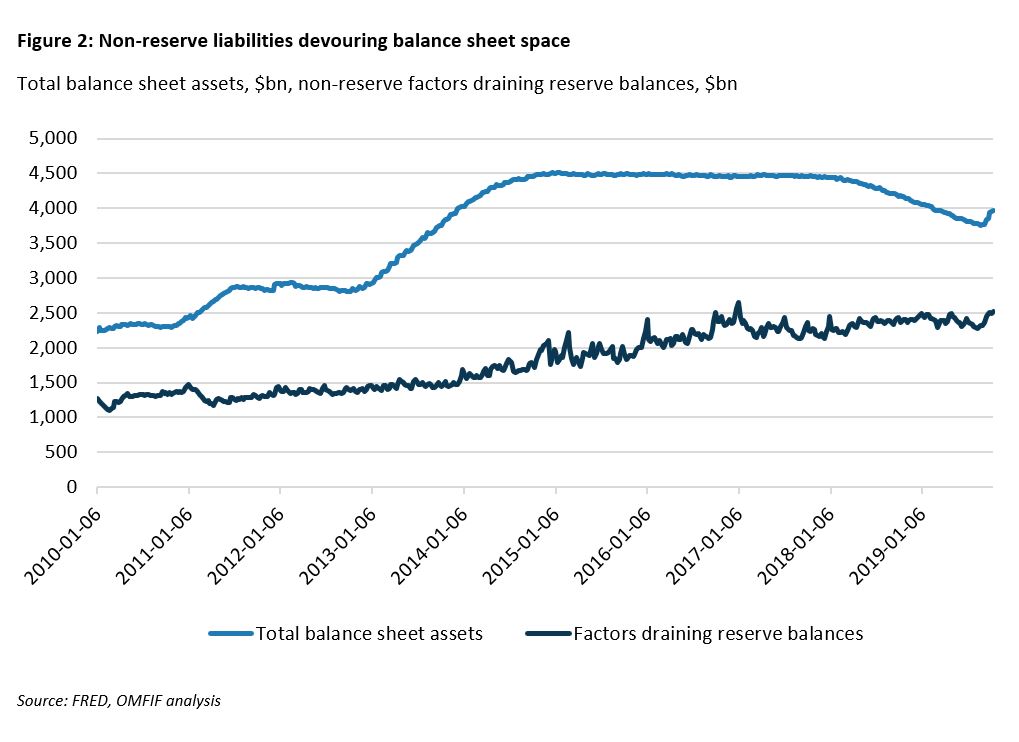 US fiscal authorities have been a key driver of tightening pressures this year. In September, the Treasury announced it would rebuild its cash buffer – a deposit account that it depleted during this summer’s debt ceiling debacle – to more than $400bn, correspondingly ‘sterilising’ reserves on the Fed’s balance sheet. A diminishing balance sheet and growing Treasury general account places pressure on available reserve balances.

Furthermore, two RRP facilities introduced by the Fed after the crisis – one for domestic institutions including primary dealers and money funds, and one for foreign official institutions – have changed the nature of financial intermediation in the US and complicated the Fed’s liability mix. Their uncapped nature and the generally attractive rate offering have made them appealing to a new range of non-traditional counterparties, and uptake has been significant (Figure 3). For foreign institutions, the rising cost of hedging dollar assets has made the repo facility especially attractive, and it has become important to liquidity management as cash demand has risen. 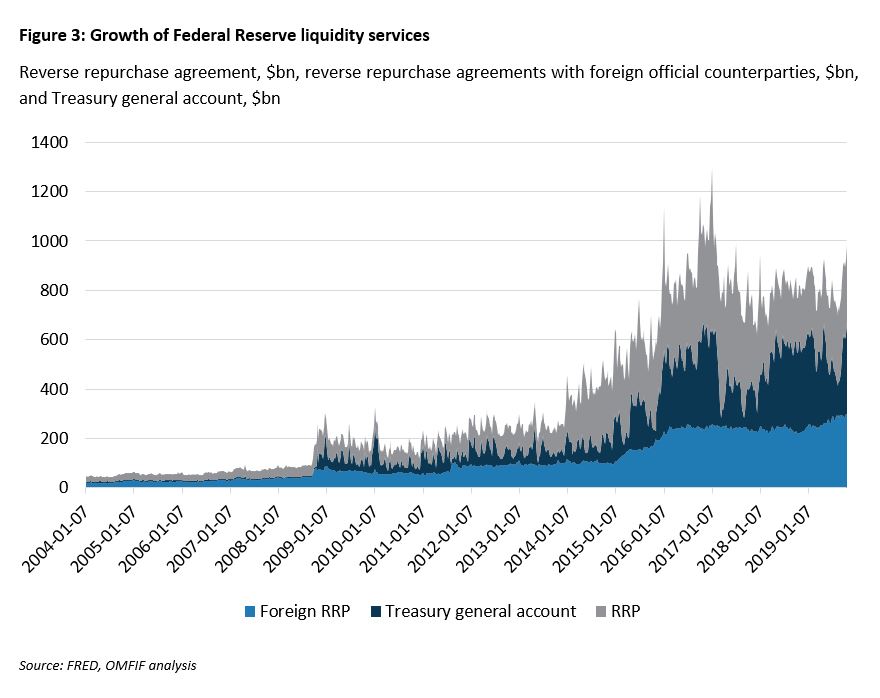 The broader shift in liability composition to overnight liquidity services from currency has squeezed the volume of reserve balances available for trading and settlement. This has acted in tandem with new regulations (particularly Basel III’s liquidity coverage ratios and ‘living will’ rules), which have pressured the overall volume of dollar liquidity outstanding, especially when considering continued currency growth.

Most reserve balances are concentrated among a small number of systemically important banks, that – for the regulatory reasons identified earlier – are reluctant to lend these out. The four largest US banks – JPMorgan Chase, Bank of America, Citigroup and Wells Fargo – held $377bn in reserves as of the second quarter of this year. Financial intermediaries relying on reserves will feel increasingly claustrophobic in the context of the growing coterie of investors accessing the balance sheet for liquidity management.

The Fed’s twin approach – repos interventions available since September, and permanent growth of the balance sheet at $80bn a month through 2020 – has calmed money markets. However, its ability to prevent a year-end spike in funding costs will be tested in December. Its medium-term impact may be limited by the dynamics between the foreign RRP facility and the Treasury bill market.

By purchasing outstanding bills, the Fed is reducing the available supply and suppressing yields on these securities, making it doubtful that money market funds or foreign central banks would acquire them as part of their liquidity management. As a result, both could increasingly turn to their respective RRP facilities to compensate, further reducing outstanding reserve balances. A declining trade-weighted dollar could counteract this, but it is uncertain how these forces will unfold.

On the whole, permanent balance sheet growth is welcome, but should be complemented by other measures to reduce reliance on other liability-side facilities that have caused uncertainty in funding markets. The introduction of a standing repo facility – which would allow counterparties to trade Treasury securities freely for reserves on demand, reducing their immediate intraday liquidity needs – was discussed at the June and September FOMC meetings, but progress has been slow. This would reduce regulatory reliance on reserves themselves, thereby curbing uncertainty around the composition mix of the Fed’s balance sheet.

Another area for improvement is in the structure of the foreign RRP facility. It is not based on market rates, but rather is priced by the New York Fed. As Credit Suisse’s Zoltan Pozsar noted in 2015, the Fed once priced the facility to encourage foreign investors to move out of the bill market when these were in short supply. Now, it might want to do the opposite. 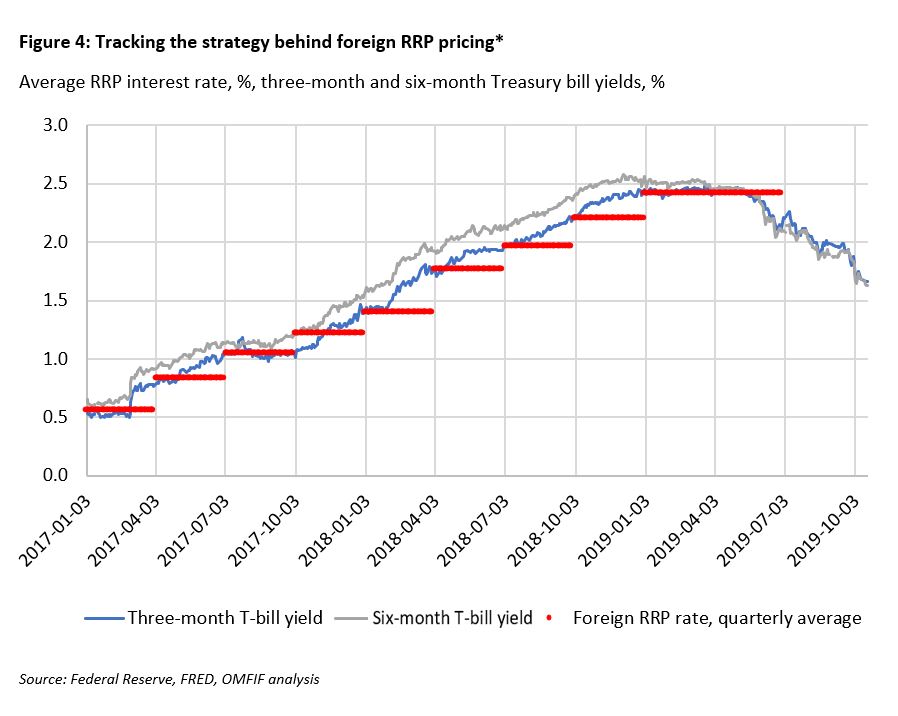 Pricing the foreign RRP facility at less attractive rates to encourage foreign official investors to move into the bill market could ease significantly pressure on the Fed. Alternatively, allowing the price to fluctuate freely but capping the facility at a certain volume may have a similar effect; the facility was limited in size until 2015, when restrictions were lifted.

Stabilising the liability components of its balance sheet is a key task for the Fed in its next meeting. While the rate cut anticipated by markets will help relieve pressure and make dollar assets more accessible to foreign investors, the underlying structural issue of balance sheet uncertainty should not remain unaddressed.

Pierre Ortlieb is Economist at OMFIF. Pierre recently spoke with Bill Nelson, chief economist at the Bank Policy Institute and Allan Malz, Adjunct Professor of Public Affairs at Columbia University, both former Federal Reserve staffers to discuss the outcome and consequences of the late October FOMC meeting. Click here to listen to the recording.

*The Fed releases average interest rates for the foreign RRP facility at the end of the first, second, and third quarters in its unaudited financial report. Rates are not reported for the fourth quarter; the ones indicated here are interpolated from the available data.