Central banks can tighten by doing nothing 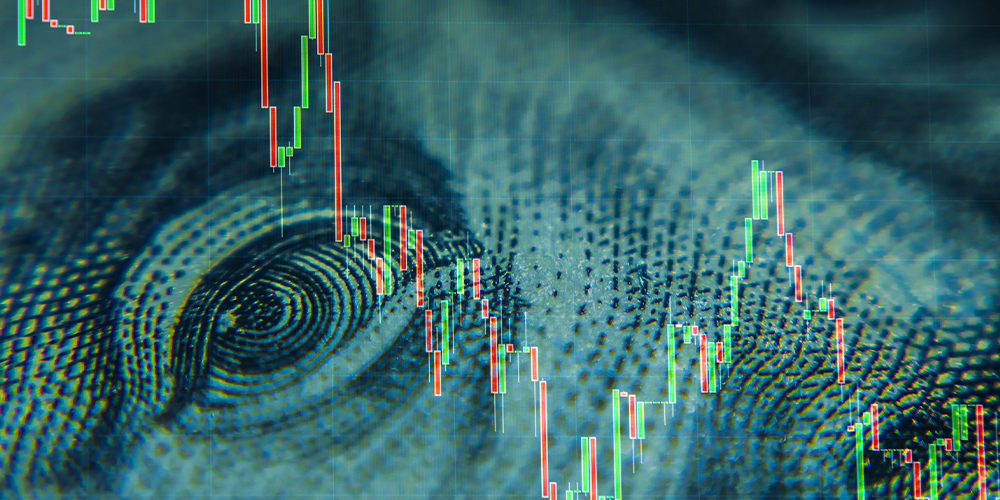 Pulling on the quantitative tightening lever

By debating the size of their balance sheets, central banks are showing the first sign since Covid-19 – and for only the second time since the 2008 financial crisis – that they may be worrying about excessively loose policy and the growing addiction to quantitative easing.

As a result of their asset purchases since 2008, the world’s big four central banks’ balance sheets total over $25tn (Figure 1). This liquidity injection to the private sector is equivalent to almost 90% of US gross domestic product or 115% of China’s. It means about three-quarters of the world’s $42tn central bank assets have been amassed in just 13 years, after the last US financial (rather than virus-induced) recession ended in mid-2009. QE can be credited with unblocking the system in 2009 and keeping it oiled in 2020. But by prolonging distortions and widening disparities, it looks too imperfect a tool to sustain.

Encouragingly, the US, euro area and UK have claimed back nominal GDP lost since 2019. Yet, with recoveries since 2009 largely output driven and inflation led more by cost rather than ‘feel good’ demand, central banks cannot adhere to the ‘old norms’ of strict consumer price index targets and Phillips curves.

Balance sheets into and since QE, $tn (grey is US recession) 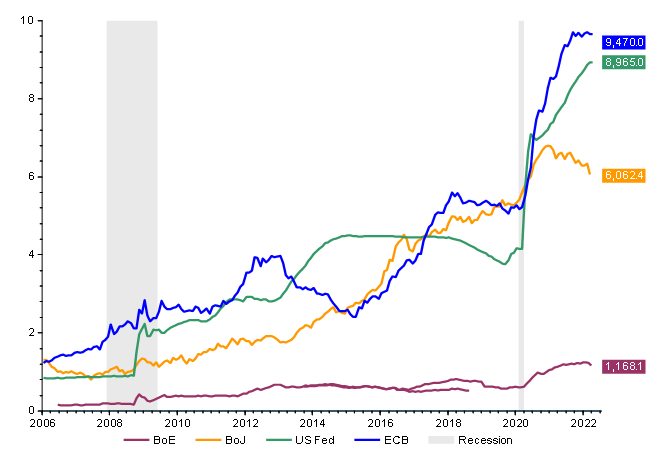 Even as they try to reclaim their cherished policy rates, the road to ‘policy neutral’ will be cut off. Real policy rates look set to remain negative for another two years in the US, Japan, euro area and UK. For the UK, this adds to the 13 already experienced.

To take some of the heavy lifting away from rate rises, quantitative tightening offers a useful, extra lever to pull. It does need to be stretched over the longer-term to minimise disruption to bond markets. In a high debt world, the alternative – an escalation of government funding costs – would be an unfortunate consequence. To get the ball rolling, it might be helpful to bring it forward.

Recovering from the 2008-09 recession, the Federal Reserve was a test case for how to push both monetary levers: rate hikes and QT. Its attempt to run QT in 2017 was abandoned after just two years, as  ‘tapering’ (reinvesting gradually fewer bonds) proved too destabilising. This was at a time when policy rates were also lifting, albeit slowly for a typical cycle (nine times between 2015 and 2019).

There has yet to be a meaningful reduction in balance sheets (Figure 1), despite the more hawkish rhetoric. The Fed’s balance sheet is still rising, though having made its final purchases of US Treasuries and mortgage backed securities in March, QE has officially finished. But full reinvestments will persist until the Federal Open Market Committee feels it safe to reinvest gradually fewer bonds, allowing the remainder to roll off the balance sheet.

The main economy that has delivered inflation is the UK, a probable symptom of the pound’s net 20% trade-weighted fall since 2007. In the G7, only Italy’s GDP/CPI trade-off has been worse. The Bank of England looks set to continue inching rates up, though with UK activity data weakening, there will be a limit to this. QT may thus be a more attractive, less visible complement. With bond reinvestments now having stopped (passive QT), the process towards active QT (selling assets) will need to be preannounced once the BoE’s preferred signpost (a minimum 1% Bank rate) is reached.

In the euro area, the European Central Bank was, up until Covid-19 hit, declaring the need to be ‘patient on (getting 2%-plus year-on-year) inflation’. It is now 7.5%, sparking pressure to tighten. In the euro area, the growth risk from QT is probably most acute, with two-thirds of private borrowing long-rate driven. This is the mirror image to the UK and approached only by the US, where mortgages price off long-yields. This and disparate national interests go some way to explaining why QT is unlikely to happen before 2024 at the earliest. In the meantime, net purchases under the asset purchase programme will continue to July-September, despite those under the pandemic emergency purchase programme having stopped in March.

Japan may never get to QT. Its has relied on QE for 24 years. Without convincing inflation, this precludes it from being switched off. And while its bond purchases have decelerated, this still leaves the Bank of Japan buying bonds at about the same pace as net new supply. It holds half of the world’s largest government bond market (Figure 2), with its share edging down only as a result of the help to its 10-year yield targeting from falling global yields.

JGBs outstanding in yen (tn) on left, % shares on right 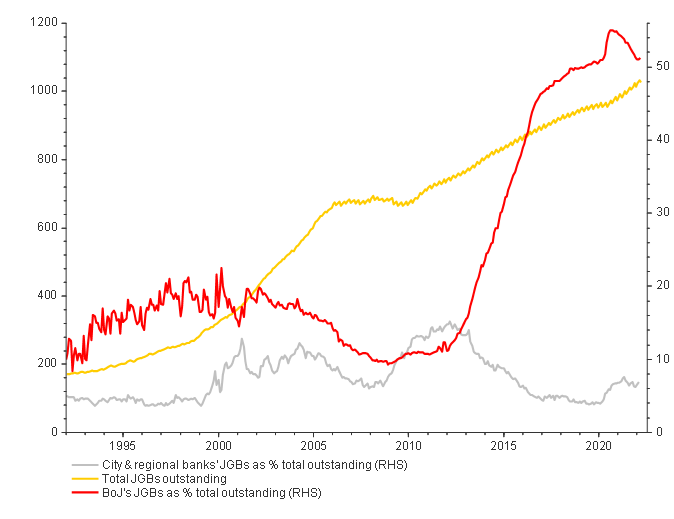 QT’s case is strengthened also by how low true policy rates are. By taking account of QE and central banks’ own trade-offs, OMFIF estimates the US and UK have de facto been running negative policy rates for most of the QE period. In the UK, this is being acknowledged by some former monetary policy committee members. And, with (cost-led) inflation running ahead of QT, this suggests real QE-adjusted rates could become even more negative. It also questions the need, should the debate reappear, to follow the ECB and BoJ onto negative headline rates.

Running true rates this low would make the US FOMC and UK MPC increasingly uncomfortable if the QE stock remains bloated. Central to their thinking is that it’s the stock, more than the flow, of QE that matters. So, it looks time to pull on the QT lever.

On both counts, a rapid and large-scale downsizing of balance sheets is improbable economically and foolish politically, as the fiscal screw is being tightened, gradual rate hikes loom and elections take place in the US and UK in 2024-25. For financial markets, a triple blow of tightening – tapering, fiscal correction and eventual rate hikes – alongside cost inflation, social disparities and creeping protectionism, would increasingly question the reflation trades put on by many asset managers.

But a positive trade-off from getting the QT ball rolling would be that policy rates can peak lower than otherwise. This could become an effective tool, especially if it’s communicated in a low jargon, practical, rather than conceptual, way, to guide mortgage-holders and other decision-makers.

Selling the assets back is one for later and would need to be done gradually to minimise disruption. But, as a precursor, passive QT could be the gentlest way of tightening – in effect, by doing nothing. It would help keep peak rates low and give comfort that central banks are not falling behind the curve. It would even go some way to reducing the downside of QE – evidenced by asset-price distortions, suppressed saving and funding strains on many pension schemes.