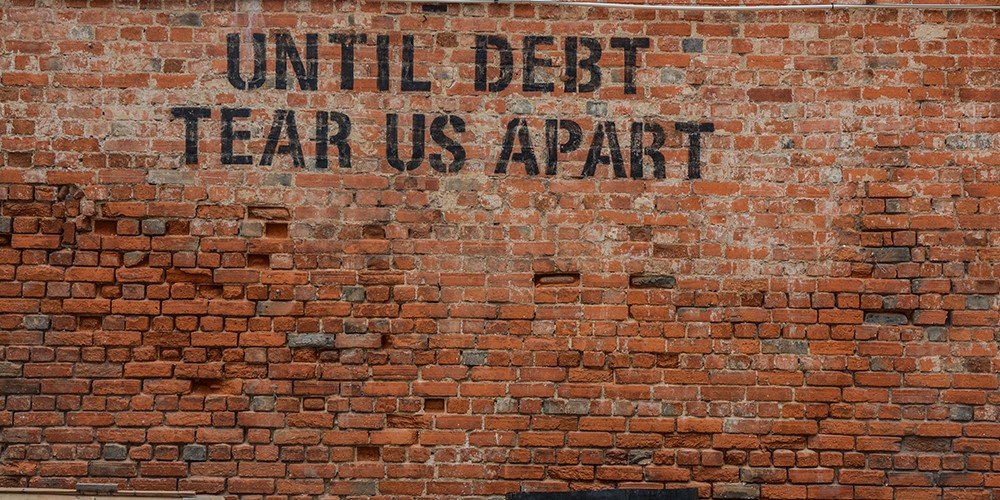 We will undoubtedly exit the crisis with damaged economies and higher debts. But assessing how sustainable these debts are is a more nuanced exercise than stimulus critics imply. The most common measure to assess debt sustainability is the debt-to-GDP ratio: how much a country owes relative to how much it produces annually. On this metric, Japan, Greece and Italy look particularly vulnerable. 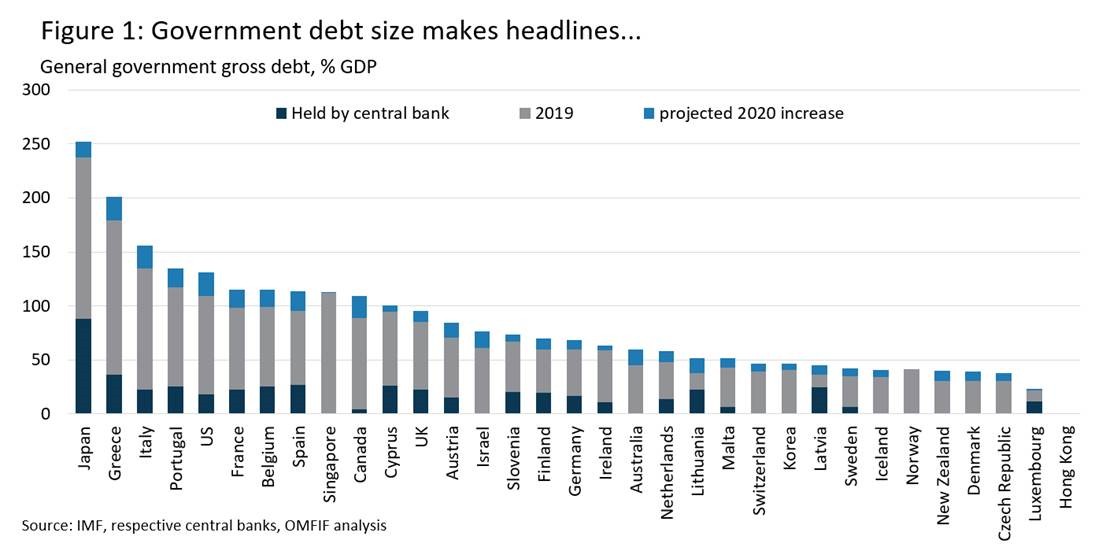 Though a critical metric, debt-to-GDP does not give the full picture. A good place to start is to look at the total economy debt or leverage which adds household and non-financial corporates’ debt to government debt. On this metric, Italy and the US look better than others. After the 2007-08 financial crisis, debt was transferred from the private to the public sector in an effort to support demand. This can happen directly through rescuing large companies, subsidising businesses and assistance to financial systems, or indirectly as the government borrows and spends to support the economy as the private sector saves more.

The public sector is again acting to bridge the economic shortfall from the lockdowns. Getting the sequencing right will be key to avoid the mistakes of the past crisis. Still, with some transferring to be expected, whole economy debt can act as an indicator for the risk of increase in government debt. France, Netherlands, Belgium and Canada look more vulnerable on this metric. 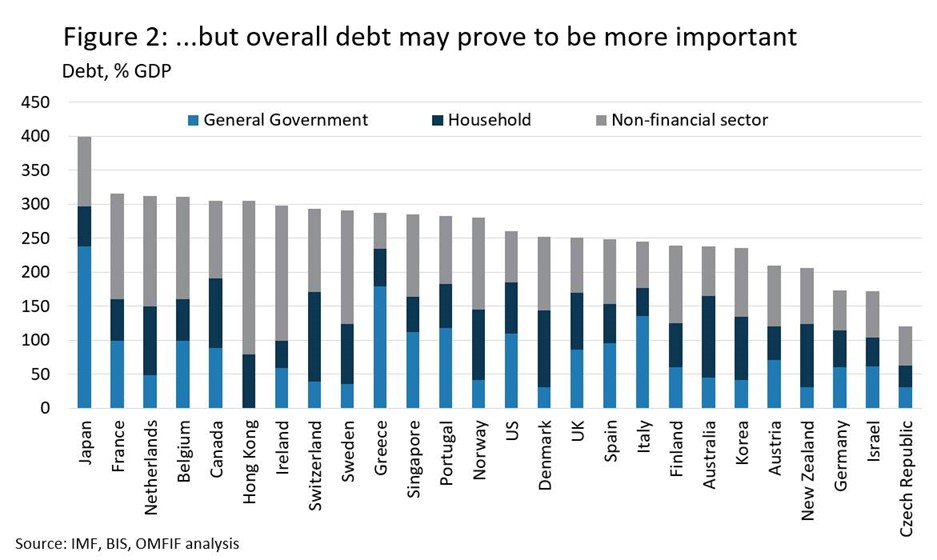 But the debt stock can be misleading in and of itself. Another key factor is an economy’s ability to service debt. To gauge this ability, it is useful to consider the excess of the interest rate on government debt over the nominal GDP growth rate. If the interest rate exceeds the growth rate, debt as a share of GDP will grow. The more this persists, the faster debt will grow, as interest is paid on previously accrued interest. To maintain the size of the debt-to-GDP ratio in this scenario, governments need to run primary surpluses. If the interest rate is lower than the growth rate, governments can continue to borrow and shrink their debt-to-GDP ratios without repaying any principal.

Japan and Italy, which topped the first chart, are at different ends of the scale here. Italy’s debt-to-GDP has been rising mostly due to a lack of movement in the denominator given years of near-zero economic growth. Japan is quite a long way from needing to run a primary surplus, which has enabled it to maintain fiscal sustainability despite its 237% debt-to-GDP ratio. If the snowball effect indicator moves into positive territory, it can still be brought down without running a primary surplus by ensuring the interest rate is below the growth rate, but it does mean that interest payments will be adding to the debt stock in the meantime. 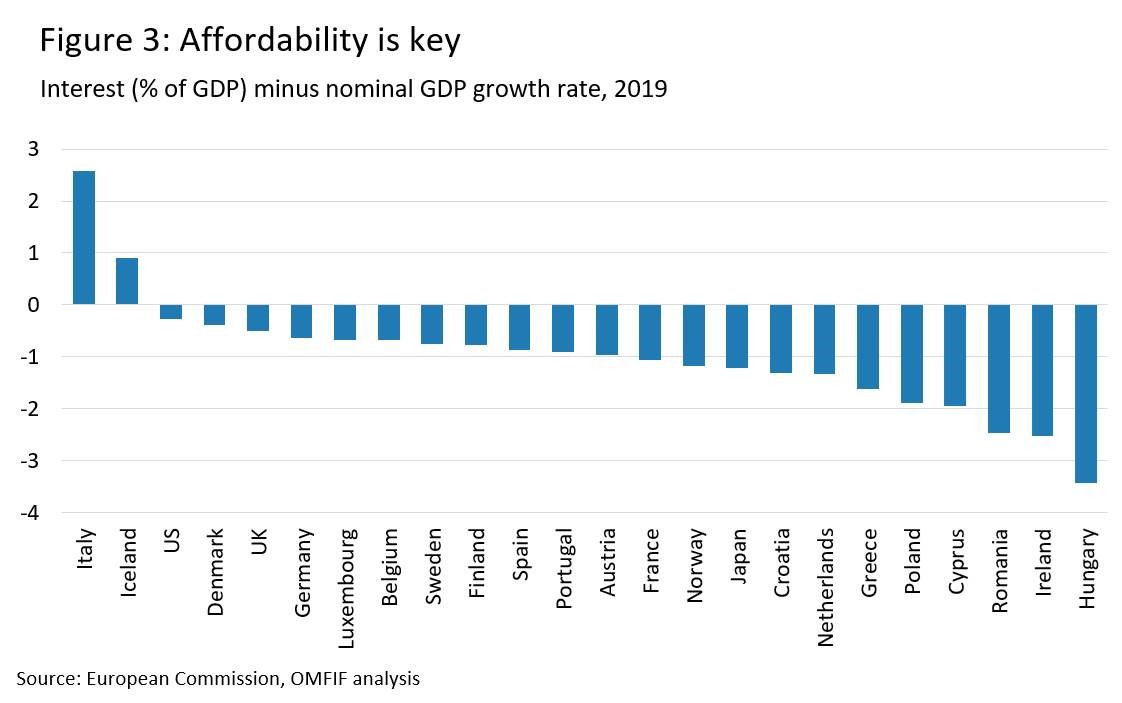 Sustainability also depends on a country’s saving rate, home bias of investors, and governments’ ability to act. If interest rates rise above growth rates, some governments will have longer to decide policy responses than others. Canada and the US have the shortest debt maturities among advanced economies. The UK and Greece are the standout performers in average debt maturities, with a large slice of long-term Greek debt held by the European Financial Stability Facility and European Stability Mechanism. If UK borrowing costs shot up this year, it would make only a slow impact on UK interest repayments. 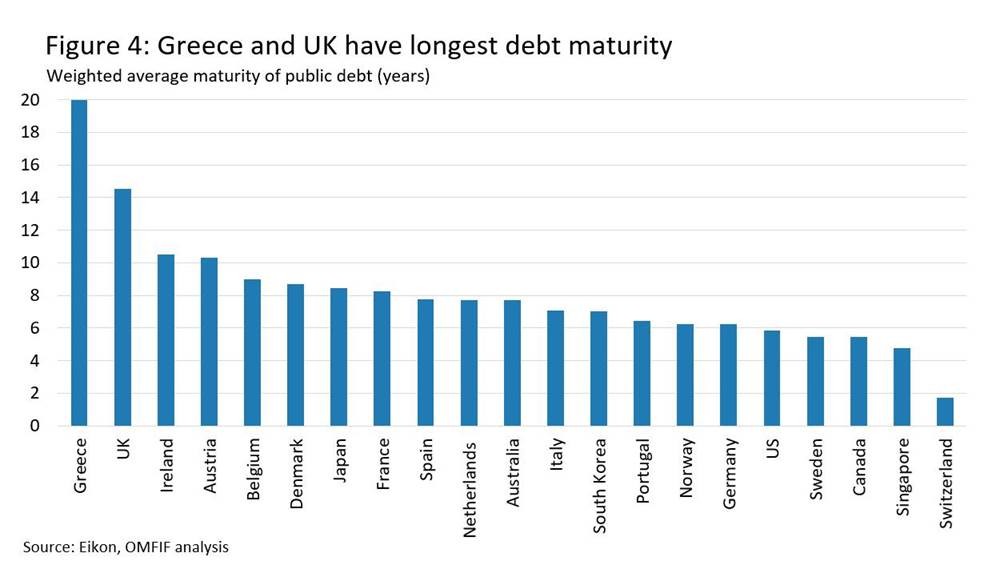 The International Monetary Fund combines the maturity profile, which determines debt repayment obligations in a given year, with the budget surplus or deficit projections to estimate countries’ annual gross financing needs. On the Fund’s latest iteration, published on 6 April and including any Covid-19 policy responses announced up to that date, the US and Italy are near the top of the ranking with GFN of over 25%. To put these in context, under its framework for market access countries, the IMF defines the appropriate threshold for GFN at 10-15% for emerging markets and at 15-20% for developed markets over the medium and long terms respectively. Greece, with one of the highest debt-to-GDP ratios, has a relatively modest GFN-to-GDP ratio projected for 2020. 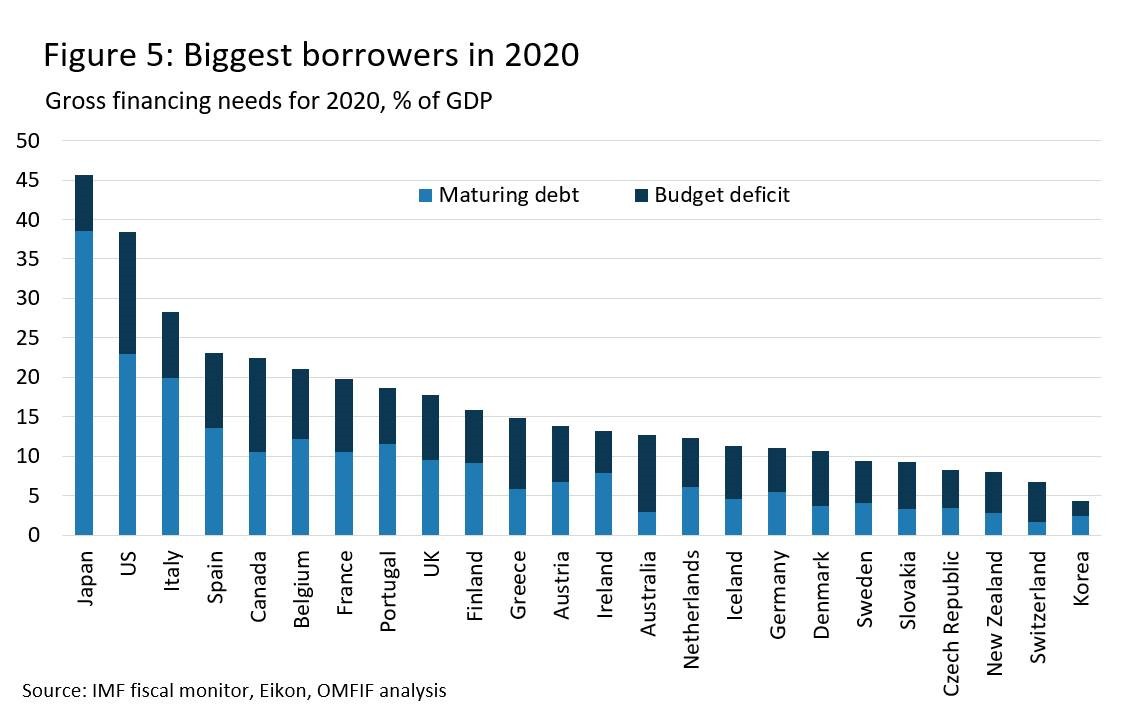 In theory, who the debt is owed to does not matter. In practice, it matters a great deal. Debt held by domestic banks risks creating sovereign doom loops. In the euro area crisis of the past decade, bail-outs were created to transfer debt from private to public creditors that could, in turn, afford to ease the terms of repayment, extend maturities and grant debt restructuring in all but name. Greece owes the majority of its debt to public institutions. As figure 1 shows, central banks hold a significant proportion of government debt in many countries. This debt has low or zero interest costs and would not be dumped under market pressure.

There are fewer options for emerging markets. Many owe debt in foreign currencies, mostly in dollars, and have experienced sharp portfolio outflows since the start of the crisis. Local currency bonds held by foreigners have also been subject to sell-offs. With the global financial safety net incomplete, many have turned to the IMF for funding. The Fund has a lending capacity of $1tn. It has lent over $14bn in its response to the Covid-19 crisis, mostly to emerging markets in Africa, Latin America and the Middle East. It has also approved debt relief for 25 low income countries for around $200m under its catastrophe containment and relief trust. 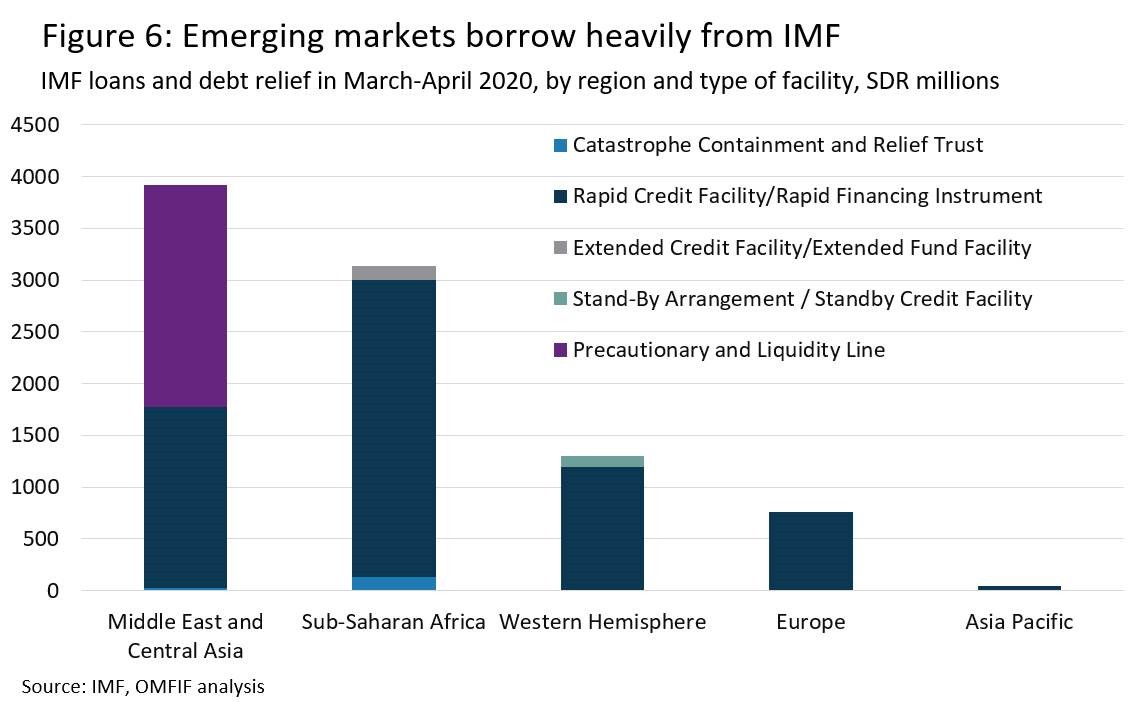 We started this piece talking about stock versus flow measures. Yes, sustainability is dynamic, and looking at the terms of payment is important. But to complete the analysis we need to look at a country’s net foreign assets position. Singapore and Norway are favoured by ratings agencies because they have huge sovereign wealth funds, reflected in their foreign asset positions. Italy has a balanced position, while the rest of the euro area periphery and France are down the scale. 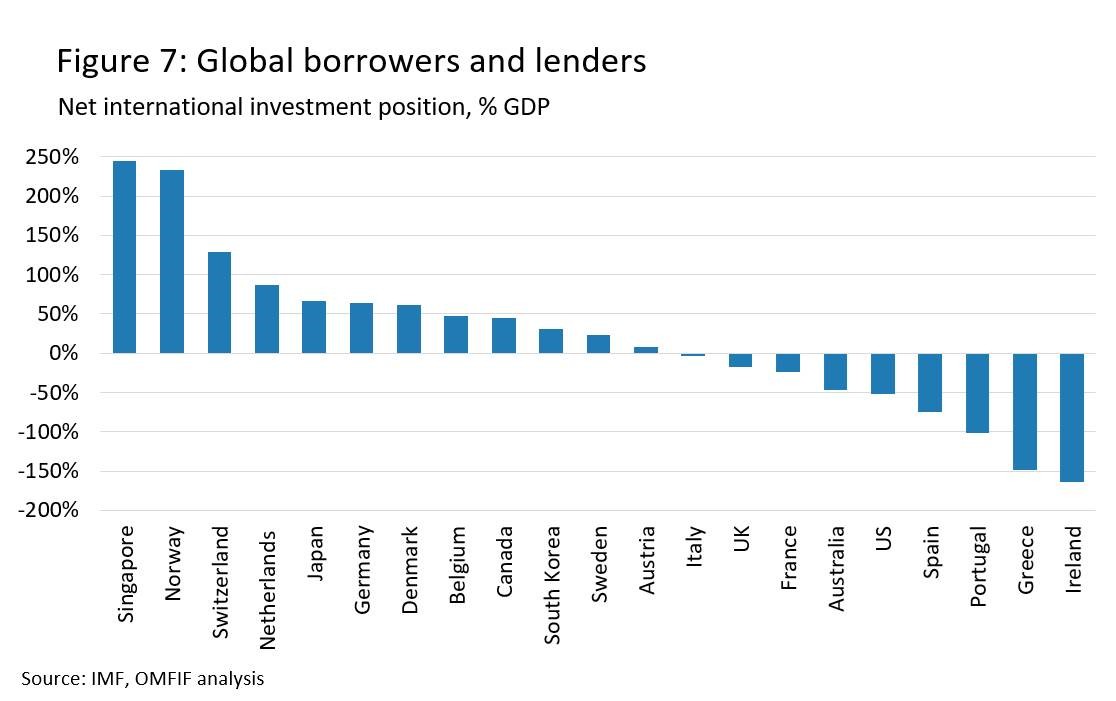 When government debt is unsustainable, or is perceived by markets to be so, there are generally three solutions. They can run a primary surplus, try to reduce the interest rate-growth rate differential, or default on the principal. Those countries where central banks can operate with more flexibility are better placed to manage debt because policies such as asset purchases simultaneously reduce interest rates and boost growth. Governments can also reduce interest rates, if it comes to it, by negotiating with creditors to reduce interest or delay payments. When advanced economies have historically run into debt trouble, the route taken is normally to reduce interest through a refinancing package, such as an IMF loan or multilateral facility. The principal is usually left alone.

Nominal growth in advanced economies has tended to be well above the interest on debt in recent years. As long as economies can rebound quickly, this gap is unlikely to close significantly. A one-off surge in debt-to-GDP ratios does not necessarily presage sovereign debt crises.

Several countries stand out in this analysis. Japan has the highest debt-to-GDP ratio, but has a positive net international investment position, long debt maturity, and historically beneficial interest-growth differential. A significant proportion of its debt is owed to its own central bank. The US has a low average maturity, high borrowing needs, but low overall debt. And it benefits from the dollar’s position as the world’s reserve currency. Italy is the euro member most commonly cited as at risk of default, with its debt-to-GDP ratio projected to rise to 156% this year. It also has a bad interest-growth differential. But it has low overall debt and has mostly suffered from low growth rather than expensive debt. It paid only 3.5% of GDP in interest payments in 2019, whereas nominal growth was 1%, and around one-fifth of its interest payments would have gone to Banca d’Italia. It also has a relatively strong net foreign asset position. Canada has high financing needs this year, has high overall debt, low debt maturity and is a net oil exporter; its debt dynamics are likely to throw up some policy challenges.

Danae Kyriakopoulou is Chief Economist and Director of Research at OMFIF. Chris Papadopoullos is Economist at OMFIF.