How to escape a recession 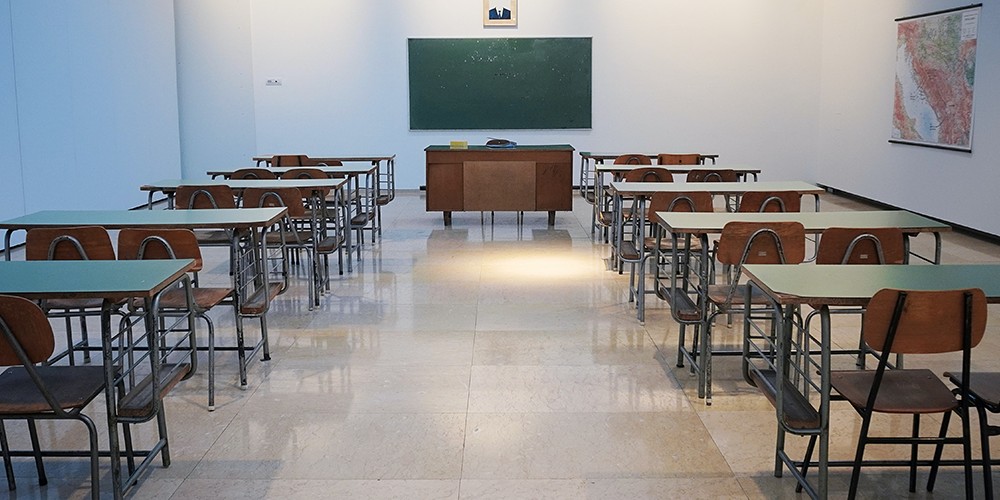 Four lessons from the 2010s

Strong economic recoveries are never guaranteed, even when the initial cause of recession has passed. The 2010s were a decade of disappointing recovery for most advanced economies. Here are four lessons from that decade that will help avert another slow recovery as lockdown measures are eased.

Money spent by one person is money earned by another. If one person spends more than their income over a given time (i.e. runs a surplus) another must earn more than their spending (i.e. run a deficit). Figure 1 shows the surpluses and deficits of the UK private, public and external sectors. The bars in each quarter must sum to zero.

If one sector tries to raise its surplus by cutting spending, another must be prepared to reduce its surplus or increase its deficit by spending more. Otherwise total income falls, erasing the intended increase in surplus. 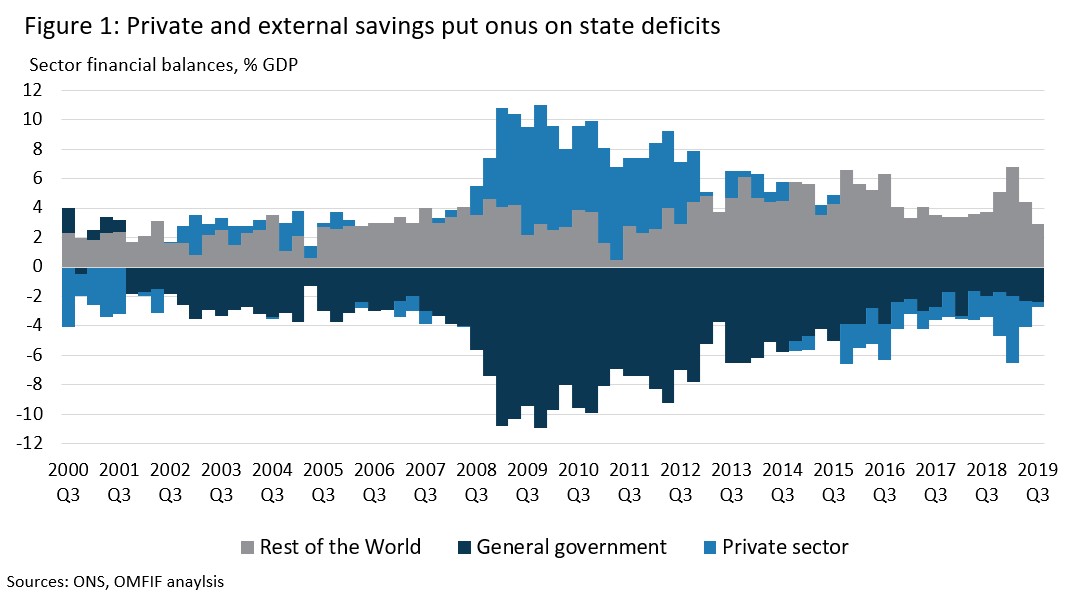 The UK private sector began running large surpluses in 2008 in order to deleverage. These were initially accommodated by expanding budget deficits. When austerity began in 2011-12, the budget deficit started coming down. Unless the rest of the world was prepared to reduce its surplus, the private sector surplus was going to be less than desired. Efforts at saving were frustrated by slower income growth, which prolonged private sector deleveraging and meant targets for budget deficit reduction were consistently missed.

Countries that waited until the private sector had recovered had better results with austerity. Between 2010-13, the US reduced its cyclically adjusted budget deficit by 5.2% of GDP, almost the same amount as Spain at 6.2% of GDP and more than the UK at 3.2% of GDP. Yet the US outperformed Europe. By the time the US started cutting its budget deficit, the private sector had deleveraged far more than in Europe, with US households shedding debt equivalent to 10% of GDP between 2009-11. Over the same period, household debt stayed flat in Spain and fell 5% of GDP in the UK.

In southern European countries, public and private sector saving persisted until the external sector turned to surplus. Unable to rely on currency devaluation, this readjustment was achieved painfully with low income growth keeping imports and wages subdued. Spain’s imports were flat from 2011-15 and wages did not begin to rise until 2018.

Domestic demand recovered swiftly in countries that cut household debt quickly. US households were able to shake debt loose because of non-recourse mortgages, which are attached to the property and do not follow the mortgage holder after foreclosure.

A mortgage holder in the US can get rid of their debt and start afresh; a Spanish mortgage holder can be straddled with unaffordable debt for years. This is worse for banks in the long run as it weighs on consumer spending and the broader economy, increasing their non-performing loans and decreasing the demand for credit. Changing laws is one way around this. Policy-makers can also assist private sector deleveraging by allowing inflation to run high for a short period, raising money incomes relative to money debts.

In many jurisdictions, regulators have allowed banks to run down their capital buffers. Rebuilding these buffers only very gradually during the recovery will support demand. Banks can increase their capital ratio by raising capital or cutting back their risk-weighted assets, which in practice means reducing their lending to businesses. Figure 2 shows bank lending recovered slowly from the last recession. It was strongest in the US, where less stringent rules were put in place. 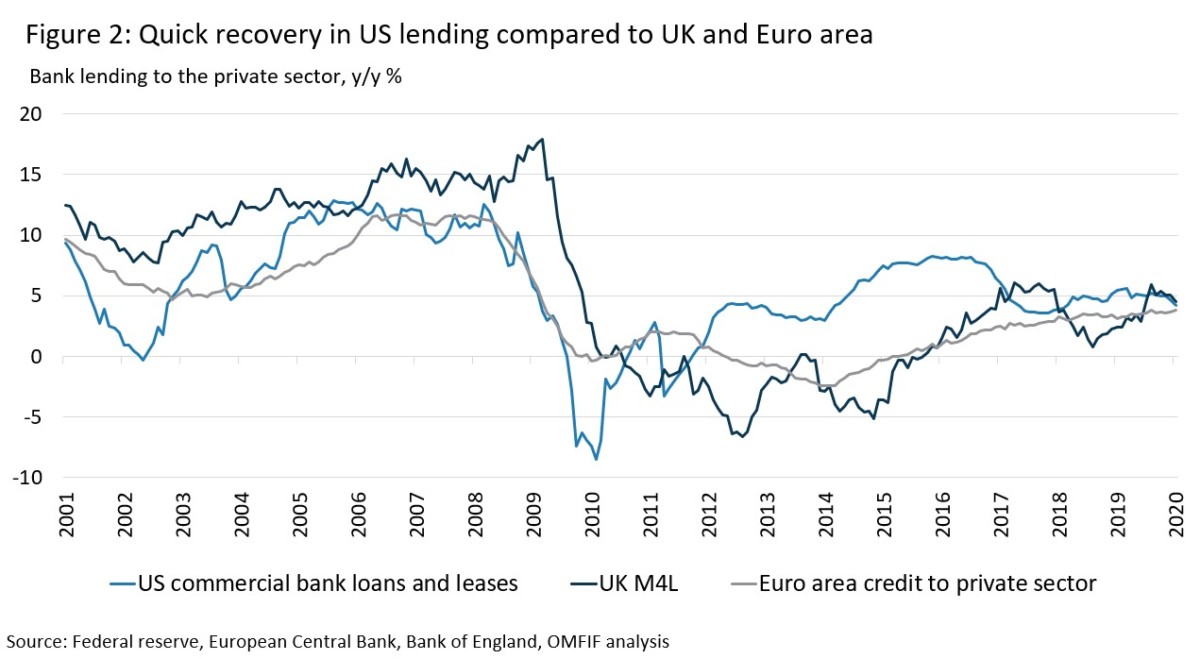 4. Keep an eye on broad money

Predictions of runaway inflation never came to fruition in the 2010s. The forecasts tended to be based on the massive expansion of central bank balance sheets, but a better guide to inflation (and aggregate demand) proved to be commercial bank balance sheets. Most money today is in the form of electronic deposits which are liabilities of commercial banks. Figure 2 shows US M2, which includes bank deposits, over the last decade. Better measures can be constructed, but it is the most timely.

Annual growth in M2 has spiked to 16%. Inflation is now more probable than during the 2010s, but not guaranteed. Much of this will be businesses borrowing to increase their cash balances to see them through tough times; the supply of cash is increasing to meet demand, rather than exceeding it. However, higher money growth rates may be coming as larger government bond issuance causes broad money to climb. 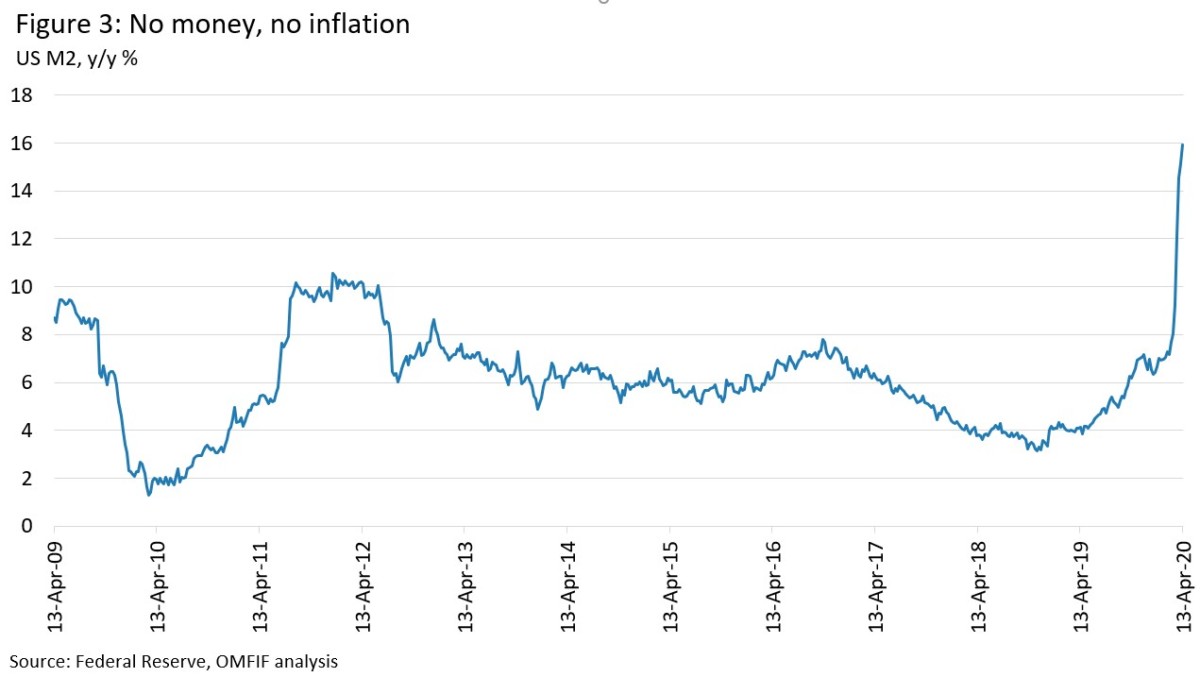