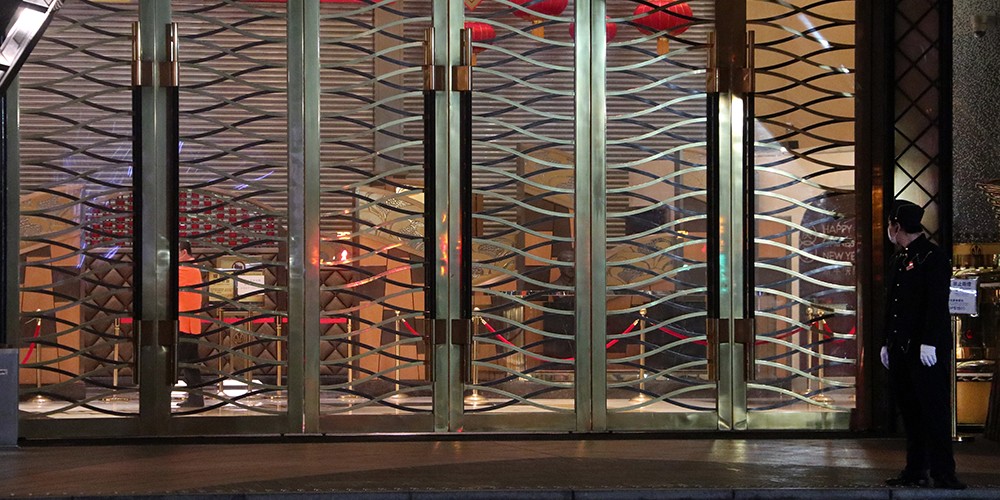 The global spread of coronavirus may require US policy-makers to dust off an old, 2008 crisis-era tool of dollar liquidity management – the temporary reciprocal currency arrangements, or central bank liquidity swap lines. These would help alleviate the virus’s impact on companies with significant burdens of dollar debt, especially those in China which have been the most exposed to the grinding halt in economic activity.

Chinese policy efforts aimed at alleviating the coronavirus-driven crunch in economic activity have been both ample and specific. Beijing has urged large state-owned banks to boost lending to small- and medium-sized enterprises by 30% over the first half of 2020, while also granting them preferential rates. More than Rmb800bn in targeted lending programmes have already been announced, in addition to actions such as temporary exemptions from rent payments. 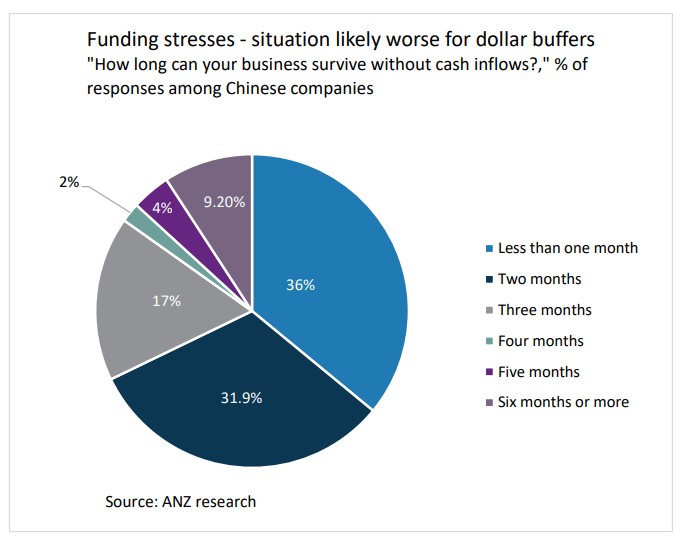 However, measures so far overlook an important dynamic in the threat the virus poses to the Chinese economy, namely the centrality of the dollar to its financial system and real economy. Those same large companies that have benefited from the flood of liquidity induced by the State Council also hold large dollar-denominated debt burdens. Even more worrying, these debt burdens are particularly prominent among those companies hardest hit by the current slowdown in economic activity, such as airlines and property developers. 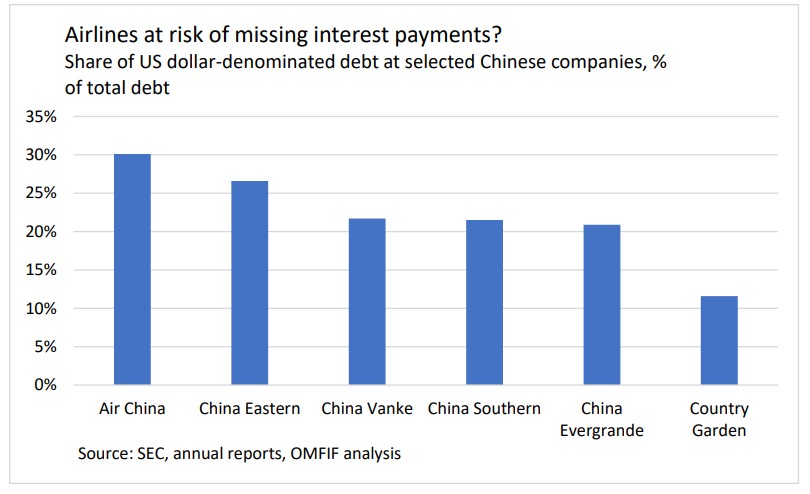 Chinese airlines have only just resumed flying a selection of routes as of early March, while property developers are still staring at an unprecedented slowdown in property sales. Given the reliance of the Chinese economy on the latter market in particular, the dollar’s role in this market should be of significant concern to policy-makers seeking to insulate their economies from rippling shocks.

For several reasons, these companies risk finding themselves unable to meet payments or rolling over on their outstanding debt. First, they are highly sensitive to movements in the renminbi, and the mild levels of depreciation seen since December 2019 have already made it significantly harder to pay back debt. Second, global corporate bond markets have ground to a standstill over the course of February, with virtually no new issuances in recent weeks given ongoing uncertainty and widening spreads.

For Chinese companies suddenly hit with rising debt service costs, dollar liquidity is an urgent need. As US Senator Alexander Wiley famously stated during 1947 hearings on the development of the Marshall Plan, ‘the world needs dollars.’

The most obvious option for relieving the current tightness in dollar liquidity conditions for Chinese companies is for the Federal Reserve to cut rates, which it did on 3 March. This will counteract tightening credit conditions in the US and globally but will only partly, and slowly, ease the debt servicing costs of dollar-reliant firms.

The Federal Reserve should strongly consider reactivating the reciprocal currency swaps set up first as part of the North American Free Trade Agreement (with Mexico and Canada) and later with other major central banks in the aftermath of the financial crisis. Over the course of the crisis, the Fed lent more than $500bn to foreign central banks as part of these arrangements, providing dollars to cash-strapped European banks at a time of instability.

These swap lines function as a de facto discount window for foreign banks whose national central banks have them, allowing them to access dollar liquidity while otherwise unable to tap markets. Speaking over the past few weeks, Fed officials including James Bullard have shown a tentative openness to reactivating these tools, which have lain largely dormant since their establishment as a formal standing arrangement in 2013. Their unwillingness to forcefully embrace this tool as an option for liquidity management during the most stressful period in financial markets since the crisis is disconcerting.

It should be noted that the People’s Bank of China does not have a swap arrangement with the Federal Reserve, unlike the European Central Bank and the Bank of Japan.

If these latter institutions tapped their swap lines, however, it would allow liquidity to wash into the offshore dollar banking system in general, allowing debtors to gradually access repayment liquidity. 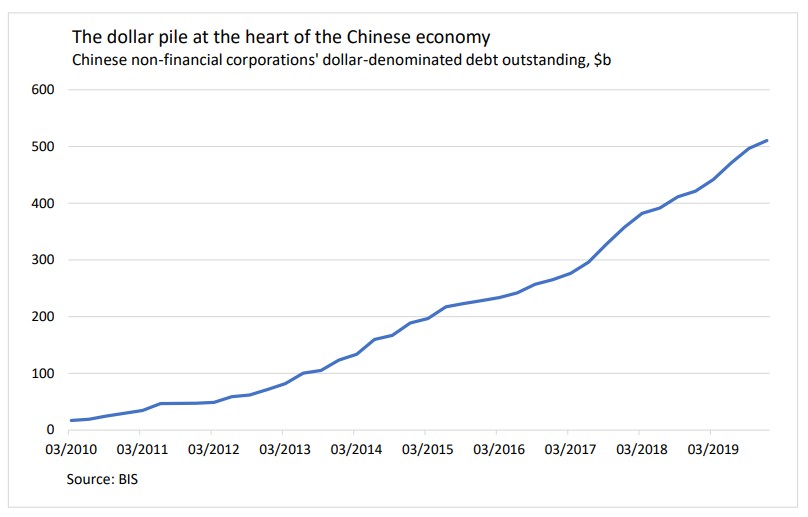 Given the tense US-China relations, the absence of a PBoC swap line may be a blessing in disguise. The politics of providing direct liquidity to the Chinese banking system and to competing firms would probably preclude use of the swap lines; providing this liquidity through other central banks and the offshore dollar system is a safer route.

In the light of China’s ongoing reliance on the dollar, it would intuitively make sense to grant them a dollar liquidity swap line; yet geostrategic pressure not to act in favour of China has precluded this and will continue to do so.

The politics of liquidity have quickly foreclosed several other creative policy tools aimed at alleviating the virus’ economic impact. US Presidential candidate Elizabeth Warren has called for targeted stimulus to affected companies, including direct support to businesses facing supply chain disruption. As part of this stimulus, the Fed would provide ‘low-cost loans to companies that agree to support their workers.’ It is unclear whether the Fed would have the authority to do this. In any case, the optics of supporting those very same businesses that have outsourced production chains would likely poison any such proposal. The swap lines would, hopefully, allow the Fed to evade this pressure.

The dollar’s omnipresence in the global financial cycle is Janus-faced; in times of uncertainty, investors flock to the dollar as a safe haven, making it harder for already-strained global firms to access as a means of payment. To avoid a global dollar crunch, the Fed needs to act quickly and decisively. Rate cuts are part of this package, but the easiest, quickest, and most politically convenient tool would be to reactivate the long-standing, little-used dollar swap lines.