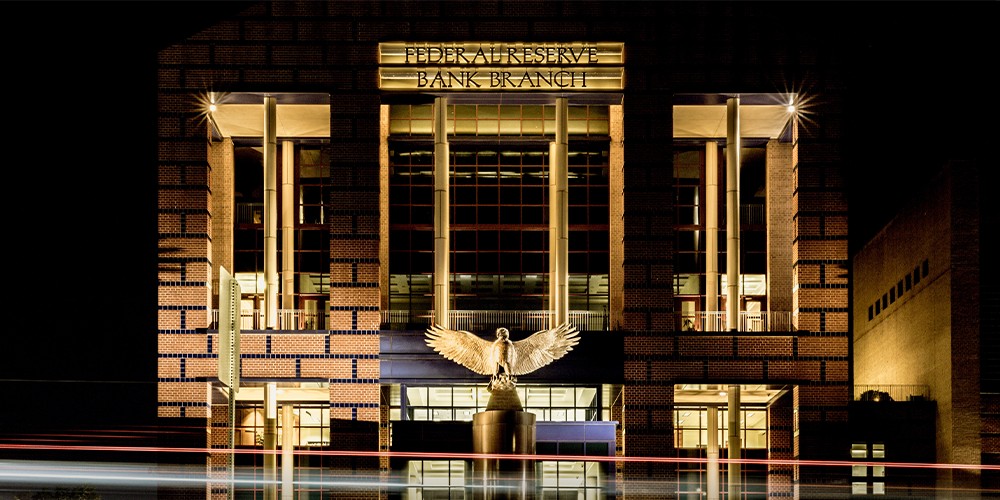 The European Central Bank and the Federal Reserve have each vastly expanded their asset purchase programmes, lending facilities, and open market operations since the start of the coronavirus outbreak. This stands in sharp contrast to a widespread pre-pandemic view – put forward both by central bank critics as well as some central bankers themselves – that monetary authorities were ‘out of ammunition’ to help combat the next crisis.

As the accompanying tables illustrate, each has found new ways of providing support and liquidity to hard-hit business, often in previously unimaginable ways.

For the ECB, this has involved a significant expansion of its asset purchases programme beyond its self-imposed issuer limits, which it has suspended in the context of its Pandemic Emergency Purchase Programme. It has broadened the scope of eligible assets to include Greek government debt as well as commercial paper issued by non-financial corporations. 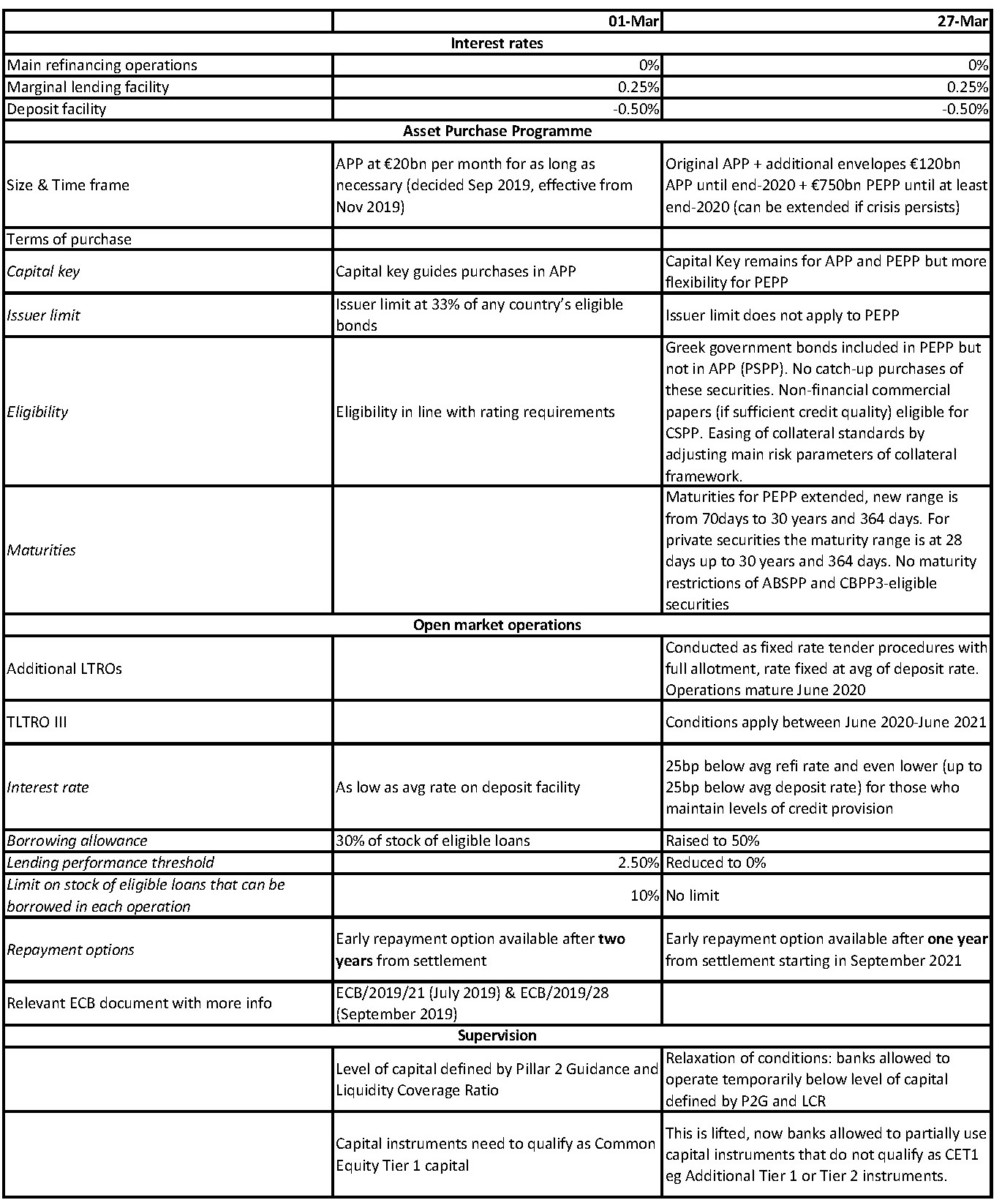 The Federal Reserve has not only dusted off its 2008-era toolkit, including the Term Asset-Backed Securities Loan Facility, the Money Market Mutual Fund Liquidity Facility, foreign central bank swap lines, and massive quantitative easing, but has also introduced significant new innovations. Facilities designed to purchase primary and secondary market corporate debt have been introduced, allowing both direct and exchange-traded fund purchases for the first time ever. Significant Treasury support has backstopped this new intervention. 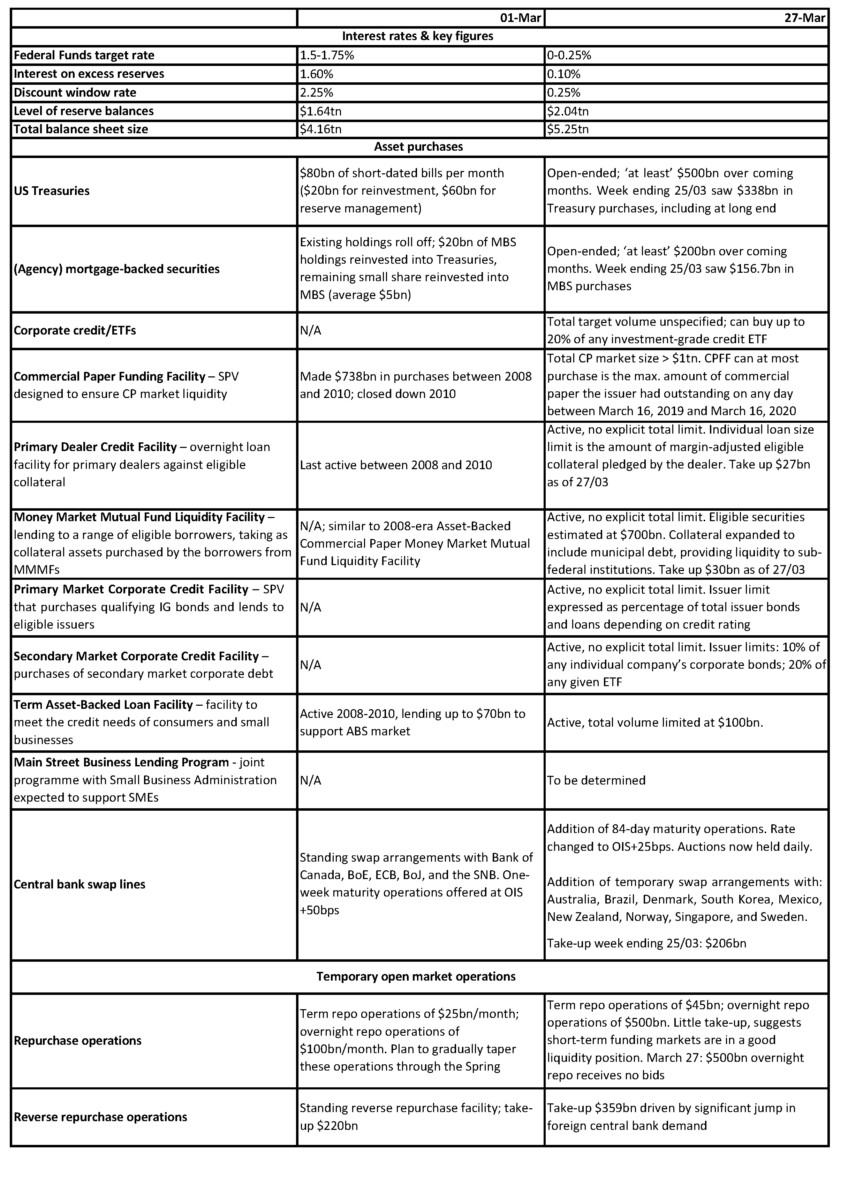 These tables highlight the growth in instruments since 1 March, as well as the nuanced differences between the central banks’ approaches. The Fed’s most significant step has been the (re-) introduction of its lending facilities, while in the ECB’s case, asset purchases have been the most trailblazing element of its policy package.

Importantly, there is still room to do more. Both have still shied away from providing genuinely significant forms of liquidity to non-bank intermediaries. Neither has fully embraced fiscal-monetary cooperation, in any of its manifold potential forms, despite direct fiscal transfers in the US, Australia, and other jurisdictions. There is still significant room for expansion and innovation without jeopardising central bank independence.

Despite these measures and prospects for further action, that central banks remain as the ‘only game in town’ is a worrying prospect. What the critics did get right is that central bank action is nearing providing diminishing returns. The measures the Fed, the ECB and others have introduced have sent an important reassuring message to markets and have helped restore confidence. But for the stimulus to be successful in supporting the real economy, fiscal policy needs to act too.

Danae Kyriakopoulou is Chief Economist and Director of Research at OMFIF. Pierre Ortlieb is Economist at OMFIF.