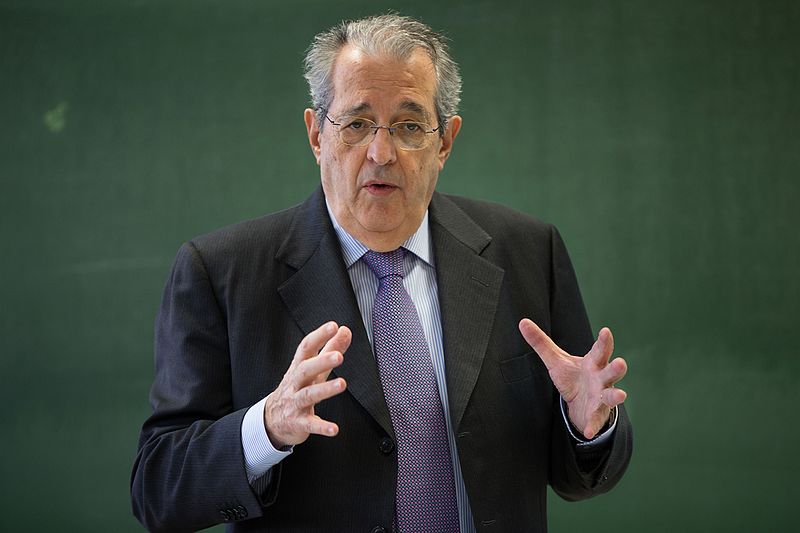 Fabrizio Saccomanni was an iconic figure in Italian and European banking and finance. His sudden death on Thursday 8 August at the age of 76 is mourned well beyond Italian borders. In his latest position as chairman of UniCredit, Italy’s largest bank, as with his previous posts as Italian finance minister and director general of the Banca d’Italia, he combined high office with immense knowledge, insight and geniality.

His passing marks a further departure from the echelons of supreme monetary technocrats who contributed to greater European integration and the birth of economic and monetary union in the unsettled period around the fall of the Berlin wall 30 years ago.

From the 1980s onwards, Saccomanni’s occasionally waspish but essentially benevolent presence was a near-constant feature of the global financial monetary scene. For more than 30 years he missed the autumn and spring meetings of the International Monetary Fund and World Bank on only the rarest of occasions. He played a major behind-the-scenes role in shoring up Italy’s good name and credit standing on world markets, following in the best Banca d’Italia traditions of outsourcing high-quality and well-trusted figures from the elevated world of technocracy to the grubbier business of running governments.

Saccomanni earned his academic spurs with a master’s degree in economics and business from Bocconi University in 1966, followed by postgraduate studies at Princeton. He entered the Banca d’Italia in 1967 during a ‘golden era’ in which Guido Carli, the legendary governor and later treasury minister, burnished the central bank’s reputation for intellectual leadership and political dexterity.

Another of Carli’s protégés was Saccomanni’s long-time associate Mario Draghi, now president of the European Central Bank (and a former Banca d’Italia governor). A further well-known name who blossomed under Carli, and a supporter of the younger Saccomanni when he joined the bank in his 20s, was Paolo Savona, the controversial 82-year old economist turned down as finance minister in the present populist Rome government, who is now president of Consob, Italy’s stock market regulator.

Saccomanni’s long engagement at the Banca d’Italia was punctuated by a spell at the IMF in the early 1970s and during a three-year vice-presidency in the 2000s at the London-based European Bank for Reconstruction and Development. Saccomanni was temporarily banished to the UK as a result of disagreement with Antonio Fazio, Bank d’Italia governor until 2005 and a staunch critic of Italy’s membership of EMU, partly because he believed it would constrain the central bank’s own powers in Italy.

When Draghi, a former Italian treasury director, took over from Fazio as governor in 2006, he appointed Saccomanni his No. 2 as director general; he was reappointed for a second term in 2012.

As one of Italy’s foremost international monetary negotiators, Saccomanni was instrumental in forging understandings in the committee of central bankers set up under Jacques Delors, then European Commission president, in 1988-89 to prepare the path to EMU. Years later Saccomanni explained how Germany, putting forward the extremist proposition of an independent European central bank but hoping to maintain the power of the Bundesbank, never believed its bluff would be called. ‘The Germans put forward the idea of an independent, truly European central bank running an international currency. They must have thought, from a tactical point of view, that no one would accept it.’

Saccomanni participated in the doomed negotiations on Britain’s parlous position in the exchange rate mechanism, the forerunner of EMU, which led to UK departure (along with Italy) on Black Wednesday, 16 September 1992. Italy wished the British to take part in a general realignment, but John Major, then UK prime minister, declined. Saccomanni said later: ‘It was a terrible thing that weekend. We [the Italians] were left isolated… The British attitude was “We can handle that”. They said they had recently contracted large loans on the international markets. They had plenty of reserves. I told the Bank of England, “This is going to be a very difficult moment for all of us.” But the Bank did not consider that this danger was real.’

Saccomanni’s career reached a zenith when he served as minister of economy and finance in Enrico Letta’s government in 2013-14. He joined the OMFIF advisory council in 2014. He was a frequent participant in OMFIF seminars and conferences, latterly at a gathering in Rome last month, at research group Assonime. Saccomanni became chairman of UniCredit in April last year and attended the lender’s second-quarter results presentation in Milan, a day before his death. Saccomanni used his international contacts to keep alive the idea of a takeover or merger of Commerzbank, the troubled German lender – although he ruled out a hostile bid. Jean Pierre Mustier, UniCredit’s chief executive, paid tribute to Saccomanni as ‘a good chairman and sparring partner, a great statesman.’ His demise robs the country, during yet another time of political turbulence, of a wise voice of counsel on Italy’s financial state and its links with the rest of Europe.