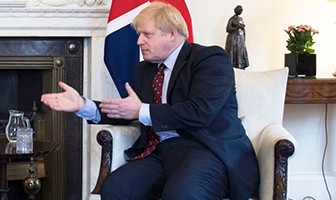 As a biographer of Winston Churchill, UK Prime Minister Boris Johnson must know that markets can unravel even the best laid economic plans, as they did following his predecessor’s ill-advised decision in 1925 to return the UK to the gold standard at the wrong exchange rate.

Johnson’s familiarity with Churchill offers at least a glimmer of hope that Britain’s latest leader might heed clear warnings from currency markets that risking a ‘no deal’ Brexit could cost his country enormously. However, Johnson may already have dug himself into a deep and impossible-to-escape political hole.

In his first speech in office, Johnson tempted fate by insisting the UK will leave the European Union with or without a Brexit deal on 31 October. The Bank of England, International Monetary Fund and Organisation for Economic Co-operation and Development have all warned that the UK economy could slump by at least 5% relative to trend in the event of a no-deal departure. The UK’s supply chains would be disrupted, and access to the European single market would be restricted.

Underlining his lack of fear of a chaotic exit, Johnson has appointed a cabinet comprising a disproportionate number of hardline Brexiteers. He has drawn several red lines for any future negotiations, especially on the vexing Irish backstop issue, that his European partners will reject out of hand. Knowing this, he has instructed his government to prepare for the eventuality that the UK might on 31 October leave the EU without a deal.

By focusing markets’ attention on the possibility of a hard Brexit on Halloween, Johnson has overlooked the fact his country is running a large underlying external current account deficit amounting to around 4% of GDP.

Judging by their performance in the days since Johnson took office, it would appear that the foreign exchange markets are not acquiescing to his assurances that a no-deal Brexit would be a non-event for the British economy. Markets’ patience with financing the UK’s large external deficit is running thin. Over the last three months, sterling has fallen around 7% to a three-year trade-wieghted low, the worst performer among the major currencies.

With Nigel Farage’s Brexit Party threatening to steal away Conservative votes, it will be politically difficult for Johnson to reverse course. This heightens the chances that sterling will continue its free fall and provoke a political crisis that could result in an early UK general election. Johnson’s preference is for a poll soon after 31 October, but political tumult could force one before that date.

In view of Johnson’s hard-Brexit platform, the probability is rising that the UK will crash out of the EU on 31 October. If Jeremy Corbyn’s Labour party won an election, markets will fear a return to the failed policies of the 1970s. Whatever happens, the UK seems destined for further economic damage and currency weakness.

The already-weak European economy looks set to face a new shock from the UK. That has repercussions for the global economy and for world financial markets that will reach US shores. That in turn would strengthen the case for a proactive Federal Reserve interest rate policy and fresh monetary easing as insurance against global economic weakness.

*
This article has been corrected in the first paragraph, where we mistakenly said that Churchill returned the UK to the gold standard at the wrong exchange rate in 1926, when the relevant legislation, the Gold Standard Act, was passed in April of the previous year.