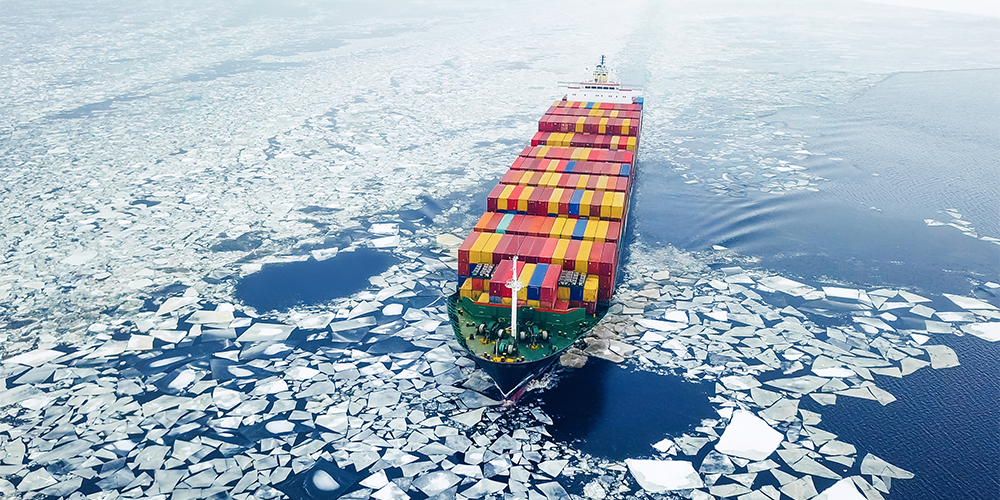 The Arctic is warming faster than anywhere else on the planet and could be free of summer sea ice by 2035. This would open up a region with vast natural resources and unrealised trade routes.

Trans-Arctic trade routes create opportunities for the control of new global shipping lanes, including the northern sea route, northwest passage and northeast passage (see map). The NSR has the most potential, shortening the traditional Suez canal route between northern Europe and China by 40%. With sea ice already retreating, the route has been tested not only in the warmer months, around September, when the sea ice is at its minimum. In the summer of 2018, Danish shipping company Maersk sent a container freighter through for the first time, while in February 2021 a large commercial cargo ship completed the route for the first time in the middle of winter.

Trade is already on the rise. In 2020, 33m tons of goods were shipped on the NSR, up from 1.5m in 2019. Countries around the NSR are investing in trade infrastructure, with Russia leading the way, showing a long-term commitment to the route.

But this is not just a battle for commercial sea lanes. Melting ice allows greater access to oil and mineral reserves, with estimates that nearly 25% of the earth’s undiscovered, recoverable petroleum resources lie in the region. Add to that the vast number of fish that live in the plankton-rich waters and this could drive a new gold rush among northern nations competing to get their hands on these valuable resources.

China in particular has factored the Arctic into its long-term strategy, publishing a white paper on what it calls the polar silk road, even if the country doesn’t border the region. While the US has been criticised for not having a coherent policy on the Arctic, summarised by former President Donald Trump’s clumsy attempt to buy Greenland from Denmark in 2019, the current administration is taking a more serious view of the area.

With these new opportunities, northern nations are looking to solidify claims. Jurisdictions in these waters and zones often overlap and determining who is entitled to which territory is decided by only loose international conventions. Along with China, many nations are ready to protect their interests. As the ice melts, Russia’s longest coastline opens up, which has led to it reopening more than 50 mothballed Soviet military outposts in the north.

Similarly, the US has ramped up military exercises in Alaska, concerned that Russian President Vladimir Putin will use the Ukraine invasion as a justification to extend territorial claims in the Arctic even further. The war has also undermined the international community trying to regulate the area. The Arctic states, barring Russia, released a joint statement on 3 March, announcing their intention to suspend participation in all meetings of the Arctic Council, removing the prime forum for Arctic governance.

The Arctic is not the pristine wilderness it once was. As the ocean warms, various institutions and nations will try to exploit lucrative new trade routes and extract natural resources that are dwindling in other areas. Russian aggression has forced the West to look for alternative sources to fulfil its energy needs, making Arctic oil and gas exploration much more attractive.

If the Arctic ice continues to recede, the focus should be to strengthen co-operation in the region and increase regulation. This could be done via a proposed reorganisation of the Artic Council, removing its ‘unofficial’ status and creating an enshrined forum for economic and security co-operation, on a level closer to that of the UN. Until those protections are in place, the increased economic and trade potential created through melting ice would create a new geopolitical theatre and a true cold war.