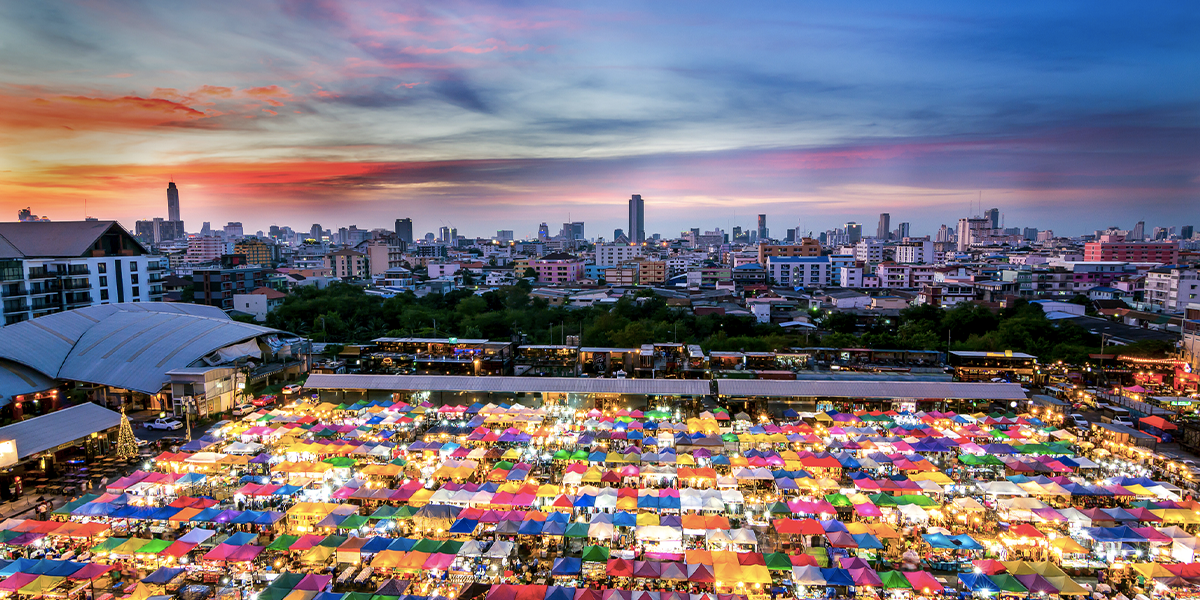 Coordinated monetary and fiscal stimulus following the initial Covid-19 outbreak in early 2020 quickly helped temper both economic and market fallout. While there has since been a somewhat uneven economic recovery, there has also been a consistent period of outperformance across so-called risky assets.

A backdrop of strong market risk appetite would presumably have included emerging markets. However, investor sentiment in EM assets has been underwhelming relative to the profile of strong cross-asset risk appetite.

Part of this is performance-related. Despite ample market liquidity and prospects for broader economic recovery, the performance of EM assets has been relatively poor. Asia has been at the vanguard of recovery given strong export growth. However, in dollar terms, returns in Asian currencies, equities and local-currency sovereign bonds are barely above their level at the beginning of 2021. So much for reflation and its support for EM.

In 2022, the challenges for EM largely centre on four factors: policy normalisation across developed markets; EM growth divergences; an EM inflation spiral and its policy implications; and the economic policy stance in China.

Monetary policy tapering, and ultimately interest rate hikes, have become increasingly priced into developed market rates, most notably by the US Federal Reserve, with its hawkish tilt at end-year 2021. The risk for EM is the implications of higher global rates on capital flows.

Flows to EM were strong in the decade following the 2008 financial crisis and further supported by policy stimulus in early 2020. However, EM capital flows have deteriorated since mid-year 2021, which coincides with the June Fed meeting, when US policy tapering prospects were first aired. Much will depend on the path of monetary policy normalisation, but robust portfolio inflows to EM in recent years remain vulnerable to a reversal.

Despite concerns over the Fed’s policy normalisation, multiple Covid-19 variants and surging inflation due to commodity spikes and supply side shortages, economic growth in EM held up reasonably well in 2021. We expect growth momentum to pause in 2022, but EM in aggregate are still expected to grow by 5%, compared to global growth of 4.4%.

In 2022, the key change will be the potential revival of sentiment and growth across South Asia. As illustrated in Figure 1, India, Indonesia, the Philippines and Malaysia are forecast to take four of the top five growth profiles (with China completing the quintet). In contrast, Latin American, European, Middle Eastern and African economies look more vulnerable. 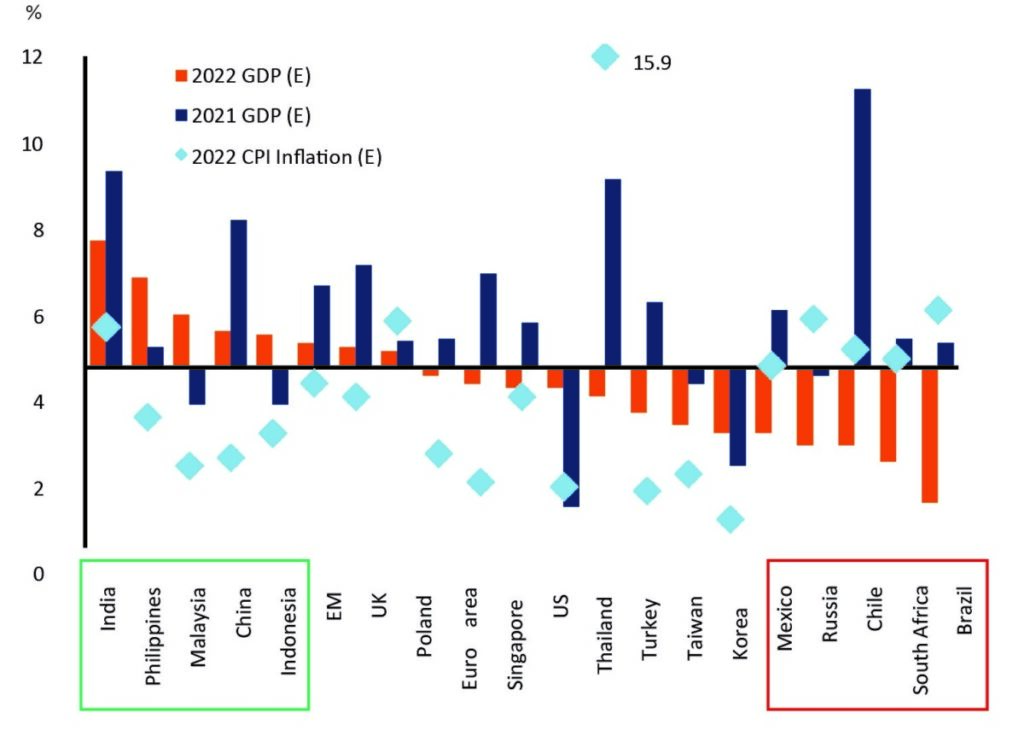 Part of this lower revision in EM growth expectations outside of Asia reflects the third key factor for 2022: robust inflation and interest rate hikes in EM. This is a process that is increasingly entrenched in Brazil, Mexico, the trio of Central European economies, Russia and, belatedly, South Africa (with Turkey a largely idiosyncratic outlier). The risk here is that the combination of higher inflation and policy tightening exerts a cost to future growth. Seldom is higher inflation/lower growth a favourable combination for EM, and this is generally absent across Asian developing economies.

There are three types of EM economies: export-orientated economies, economies driven by domestic consumption and those centred on travel and tourism revenues (Figure 2). Throughout the pandemic, the first group has led the recovery via the global supply chain, with the other two left behind on social distancing, restrictions and travel lockdowns. As new variants spread, a key question is whether EM growth factors will be the same in 2022 or whether the surge in vaccination rates as well as government re-opening policies will be enough to improve domestic demand and non-export sectors. 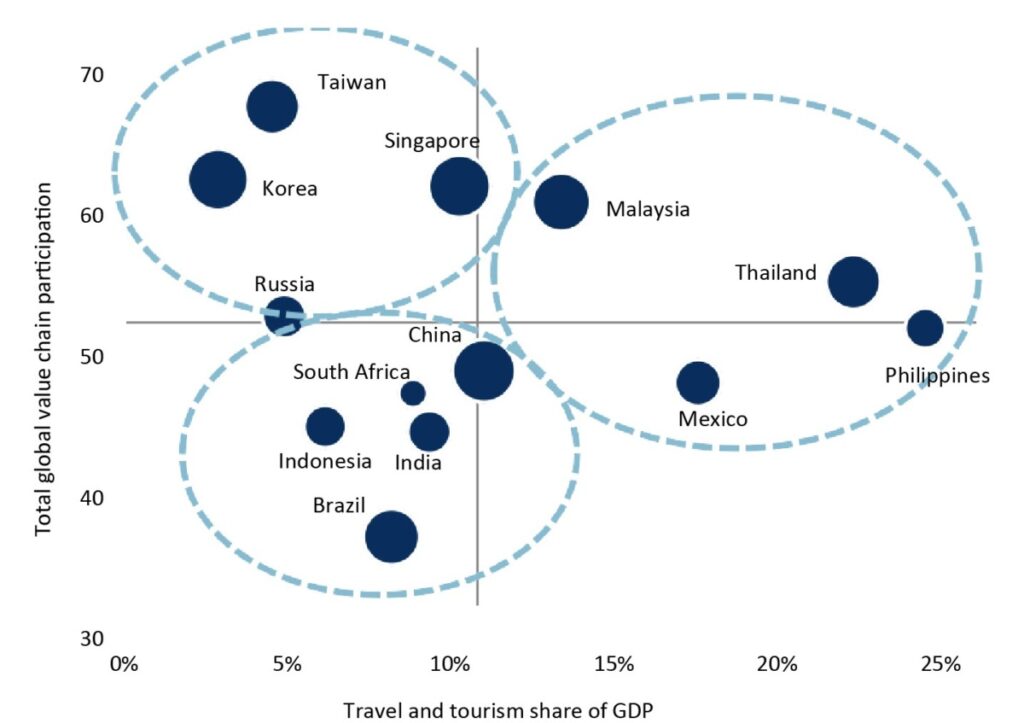 And what of China? Here, hope springs eternal. Our proprietary China macro momentum indicator dipped into negative territory in Q3 2021 on property sector curbs and regulatory crackdowns. However, there are signs of a more accommodative policy stance out of Beijing.

The recent cut in reserve ratios will pump credit and liquidity to the domestic market. The Annual Central Economic Work Conference in early December noted stability, but in the context of counter-cyclical monetary and fiscal policy. This indicates that more policy easing is coming and coordinated easing policies contrast markedly with the tightening efforts from the beginning of 2021. Finally, less restrictive policy in China could be the spur towards solidifying some of the regional growth trends in 2022, which augurs well for Asia as opposed to other EM regions.