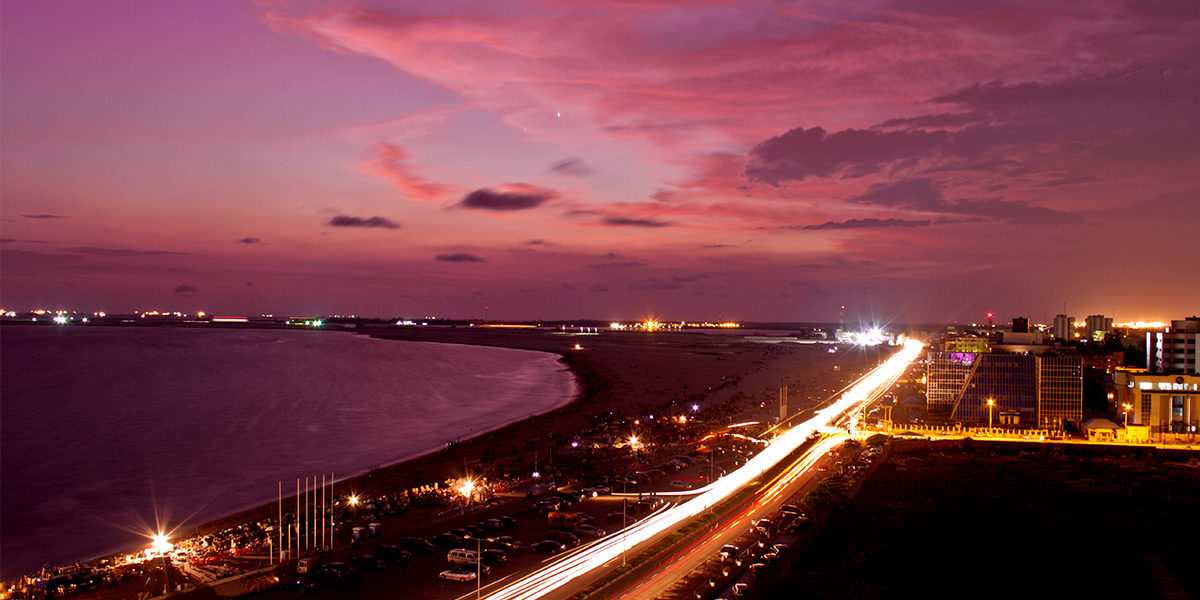 Improving fiscal management and governance is key to a sustainable future

The Absa Africa Financial Markets Index evaluates financial market development in 23 countries, and highlights economies with the most supportive environment for effective markets. The aim is to show present positions of the countries, as well as how economies can improve market frameworks to bolster investor access and sustainable growth.

This is an extract from Pillar 5: Macroeconomic opportunity.

Pillar 5 assesses countries’ potential for growth by looking at both macroeconomic performance and quality of governance. Scores for this pillar are calculated using macroeconomic data from end-2020, although transparency indicators are based on information available for mid-2021.

Countries collectively performed best in this pillar, scoring an average of 62. Despite constrained growth and deteriorating credit quality in a number of countries in 2020, improvements in financial and fiscal transparency kept scores steady. 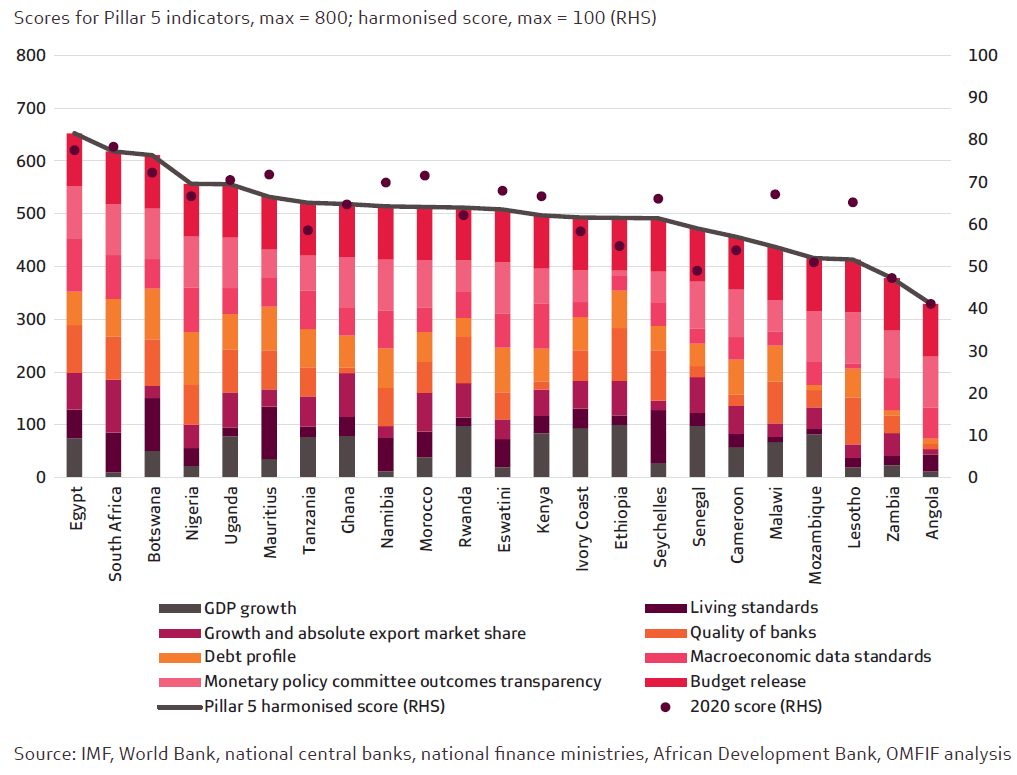 Egypt tops Pillar 5, regaining the lead from South Africa. Egypt is one of the few countries that experienced positive economic growth in 2020 despite the pandemic. In June 2021, the International Monetary Fund completed the second and final review of Egypt’s economic reform programme supported by a 12-month stand-by arrangement. The IMF expects Egypt to rebound strongly over the next five years. Improvements in living standards, a low ratio of non-performing loans and an improved debt profile also contributed to Egypt’s performance.

South Africa moves down one place to second in Pillar 5. Despite having higher gross domestic product per capita and a larger export market share than Egypt, South Africa’s bank loans deteriorated, and the country continued to experience poor economic growth in 2020.

Tanzania rises nine places to seventh, the largest improvement in the pillar. This performance was driven mainly by expansion in its share of regional exports and improvements in transparency, specifically in communicating monetary policy decisions.

Ethiopia ranks first for GDP growth, which looks at both historical growth and forecast. In 2020, Ethiopia performed well under the IMF’s Extended Credit Facility and Extended Fund Facility with a continued commitment to medium-term macroeconomic reforms while balancing the challenges created by the pandemic and domestic security concerns. Ethiopia moves up two places but remains among the lower-ranked countries at 16th, limited by low scores in living standards, macroeconomic data standards and monetary policy transparency.

Rwanda and Senegal round out the top three in GDP growth, and are expected to grow by 7.4% and 7.1%, respectively, over the next five years. Both countries are projected to rebound stronger than others as they are less dependent on oil and commodities exports. In July 2021, the IMF completed its fourth review under the Policy Coordination Instrument and approved a one-year extension for Rwanda to facilitate macroeconomic and financial stability while advancing reforms under Rwanda’s National Strategy for Transformation. The IMF also approved a $650m stand-by arrangement for Senegal and completed the third review under the PCI.

External debt profiles worsened for most countries during the pandemic. Four countries had external debt above 50% of GDP at the end of 2020, up from three the year before with Rwanda joining the group. Mozambique remains in debt distress, having the worst debt-to-GDP ratio at 97.5%. It is one of the countries to benefit from the IMF’s Catastrophe Containment and Relief Trust, which provides grants for debt service relief to countries left most vulnerable by natural calamities and public health disasters. 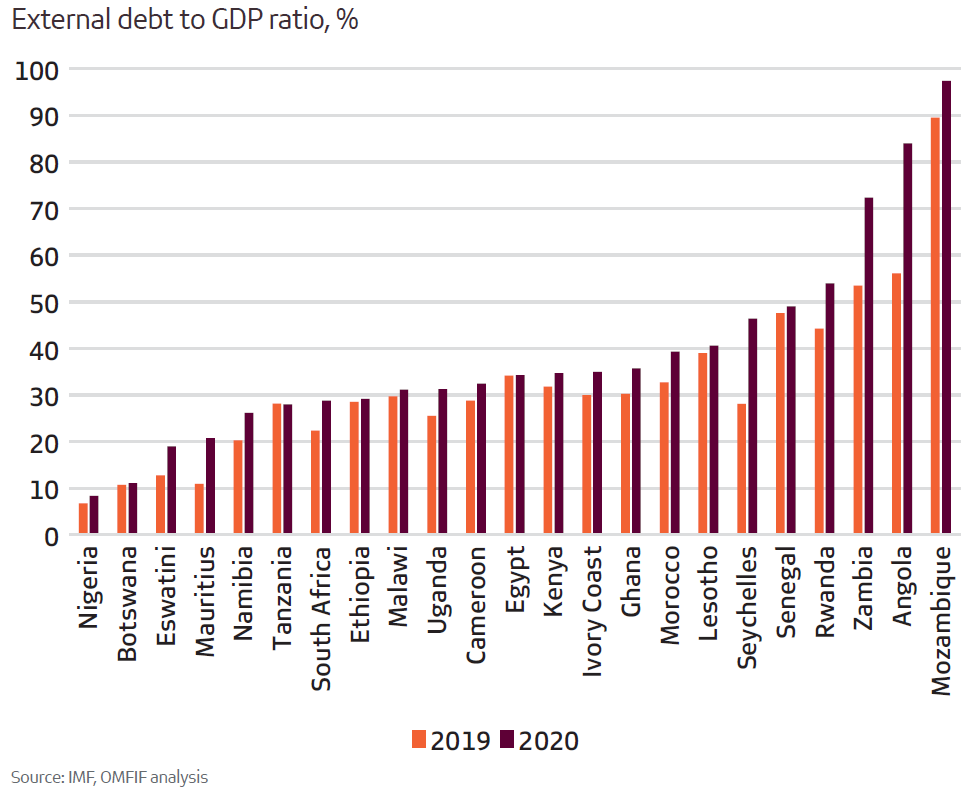 Aside from Mozambique, the IMF identified several other index countries at risk of debt distress as of end-June 2021. Cameroon, Ethiopia, Ghana, Kenya and Zambia are at high risk, while Ivory Coast, Lesotho, Malawi, Rwanda, Senegal and Uganda are at moderate risk. In addition to the short-term emergency funding and other debt relief measures from the IMF to help mitigate the impact of the pandemic on countries’ finances, 14 countries have sought relief from the DSSI as of July.

In contrast, Nigeria has kept its official borrowing relatively low. At 8.4% of GDP, it has the best debt profile, boosting its ranking by five places to fifth. However, with oil prices expected to remain relatively low, the debt ratio is expected to go up. Botswana and Eswatini also score well, with external debt at 11% and 19% of GDP, respectively.

Several countries, including Ghana, Kenya, Senegal, Ivory Coast and Cameroon issued eurobonds in the first half of 2021. Funding from eurobonds helps countries to finance maturing debt obligations and infrastructure projects and support their budgets. Access to international capital markets is critical in crises, allowing countries to diversify their funding sources.

An extract from Pillar 3: Market transparency, tax and regulatory environment is available here.