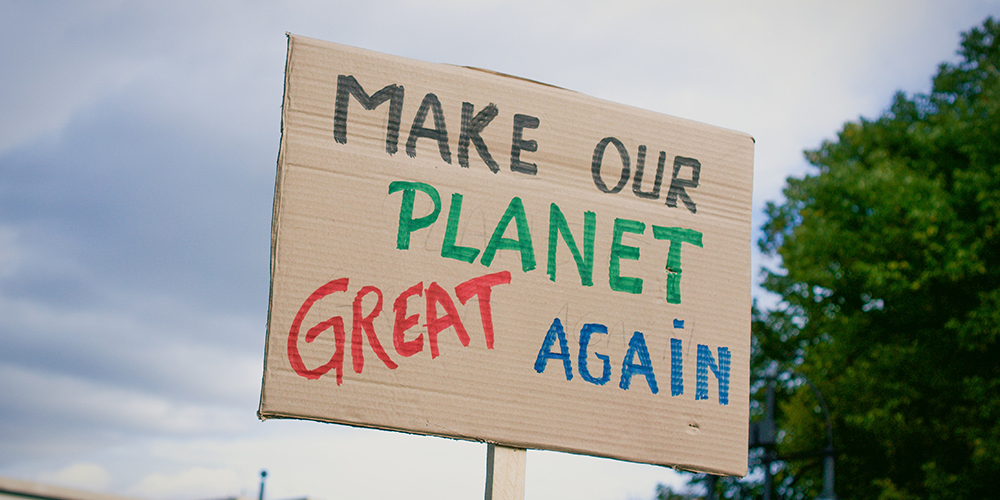 The US must ‘make up for a lost four years’ and should ‘be seen to be at the lead’ of action against climate change, one of the country’s most influential policy-makers said at an OMFIF event yesterday. Co-hosted by DZ Bank, the event brought together key financial institutions from Asia, Europe and the Americas to discuss sustainable investment and climate resilience.

Sarah Bloom Raskin, former governor of the Federal Reserve Board and deputy secretary of the US Treasury from 2014-17, told participants at the day-long conference of the ‘unequivocal commitment’ of President Joe Biden’s administration to address the threat of climate change.

This presents the US with a new opportunity to adopt a leadership position in sustainable finance. But it’s unlikely to extend to the Treasury issuing green bonds: Raskin said she would be ‘astonished’ to see such a move.

She has been tipped to become the environmental, social and governance tsar of the Biden administration. But she said that the obvious candidate to lead a more integrated approach to addressing the climate challenge would be Treasury Secretary Janet Yellen. The former Fed chief’s commitment to sustainability in finance is certainly beyond question, as she emphasised at a meeting of G7 finance ministers and central bankers last month. Yellen pledged that the US is committed to leading the global response to climate change after years of environmental rollbacks under President Donald Trump.

Raskin acknowledged that the ‘byzantine’ layers of US financial policy-making could hinder swift action. ‘It means we may have systemic risks building up in the cracks between the silos,’ she cautioned. ‘It will take a new level of coordination to get everyone rowing in the same direction.’

Raskin is currently a Rubenstein fellow at Duke University, specialising in economic resilience and sustainable finance. For several years, she has been warning about the threat of climate change to the financial stability of the US. The starkest of these was made last year in a testimony to the Senate Democrats’ Special Committee on the Climate Crisis hearing. Raskin cautioned that failure to understand or measure exposure to this risk within the financial community may be ‘more troublesome’ than its misjudgement of the risk inherent in derivative products in 2008.

She believes that, from the perspective of sustainable finance, the last four years have been a casualty of climate denialism in the White House. Throughout the Trump administration, she said, this denial made it close to impossible for climate scientists or economists ‘even to make the case that we are in the midst of a climate catastrophe.’

Raskin emphasised how cloth-eared the previous administration had become to this argument in her impassioned testimony to the Special Committee. She said that the ‘conspicuous absence’ of the Fed from the Network of Central Banks and Supervisors for Greening the Financial System was ‘extraordinary, irresponsible and almost unbelievable.’ It was notable that one of the first decisions the Fed made after the presidential election was to formally join this influential network.

Until recently, Raskin said, most federal agencies in the US appeared to share the Trump administration’s insouciance about the environment. A notable exception was the US Commodity Futures Trading Commission, which last September published an extensive report on the systemic risk posed by climate change. The report broke new ground by drawing on the expertise of the scientific and financial communities in assessing the threat posed by climate change to US financial stability. Raskin noted that, ‘In Europe this might not have been big news, but in the US it was an important jolt.’

Recognition of the magnitude of the climate threat has now permeated several key US financial agencies. These include the Treasury, the Federal Reserve Board, the Securities and Exchange Commission, the Office of the Comptroller of the Currency and even the Public Company Accounting Oversight Board.

A coordinated approach needs to be formulated sooner rather than later if the US is to move towards standardisation in the sustainable finance market. ‘Because we have an abundance of templates on disclosure, we still have no standardised understanding of what terms like impairment, fair value and amortisation mean in a climate context,’ said Raskin.

In a definitional vacuum of this kind, pronouncements by regulatory agencies risk sounding more like gentle suggestions than the decisive requirements the market needs. Take last month’s statement from the SEC on disclosure. This promised to ‘refresh guidance’ issued in 2010 on climate change disclosure, but made no mention of enforcement, pledging instead to ‘review’, ‘assess’ and ‘engage’.

The Fed has used similarly emollient language about bank stress tests, preferring for the time being to recommend ‘scenario analyses’. According to Federal Reserve Board Governor Lael Brainard, these are ‘exploratory exercises’ that allow banks and supervisors ‘to assess business model resilience to a range of long-run scenarios.’

Raskin observed that ‘Americans have a lot to learn from the Europeans, which I attribute to the four years we lost under the previous administration.’ This does not mean that the US will look to cut and paste features of the sustainable finance capital market that are becoming commonplace in Europe, such as government bond issuance in green format. She said that although this would be a game-changer for sustainable finance, she did not expect to see the US government add a green bond to its funding repertoire. Tweaks made by the Treasury to its issuance programme have been confined largely to its maturity schedule. Incorporating ESG elements into its funding strategy would be raising the bar improbably high.

Over the longer term, other time-honoured features may need to be adapted or overhauled if the US banking industry and capital market are to lead the charge against climate change. Raskin said that US industry has historically been market-led with regulation playing a secondary role, which is the reverse of European priorities. Whether this freewheeling model will work as effectively in an industry influenced increasingly by ESG considerations is open to question.

Other speakers in the US session of the OMFIF conference agreed that the global impact of Biden’s reversal of the previous administration’s environmental policies can scarcely be overestimated. ‘Emerging and developed markets go hand in hand,’ said Flora Chao, global head of funding at the International Finance Corporation. ‘So there is no question that an administration focused on climate in the United States will have positive effects for all the countries we work in.’