Fed can crush ‘bond vigilantes’ if it chooses 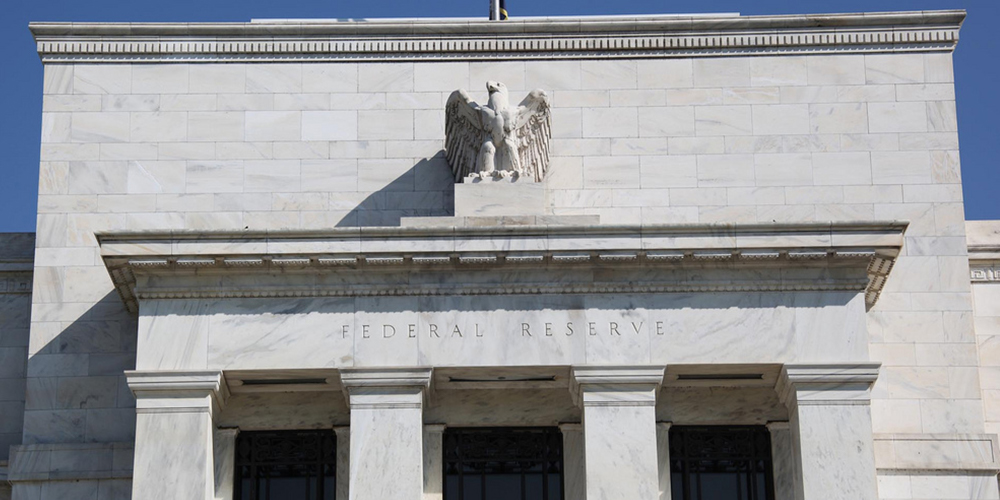 The Federal Open Market Committee met this week amid heated debate over the nature and state of the market for US government bonds, where long-term yields have burst to levels last seen in early 2020, before the Covid-19 pandemic.

The surge has been highly unusual, even measured against previous episodes of instability in the world’s largest and deepest market (figure 1). Driven primarily by rising growth and inflation expectations as well as the prospect of earlier than expected interest hikes, this spike has been exacerbated by a series of tepid government bond auctions. Demand for US treasuries, measured by the bid-to-cover ratio, has fallen steeply since the start of the year, reviving suggestions that ‘bond vigilantes’ will once again police unruly fiscal policy. 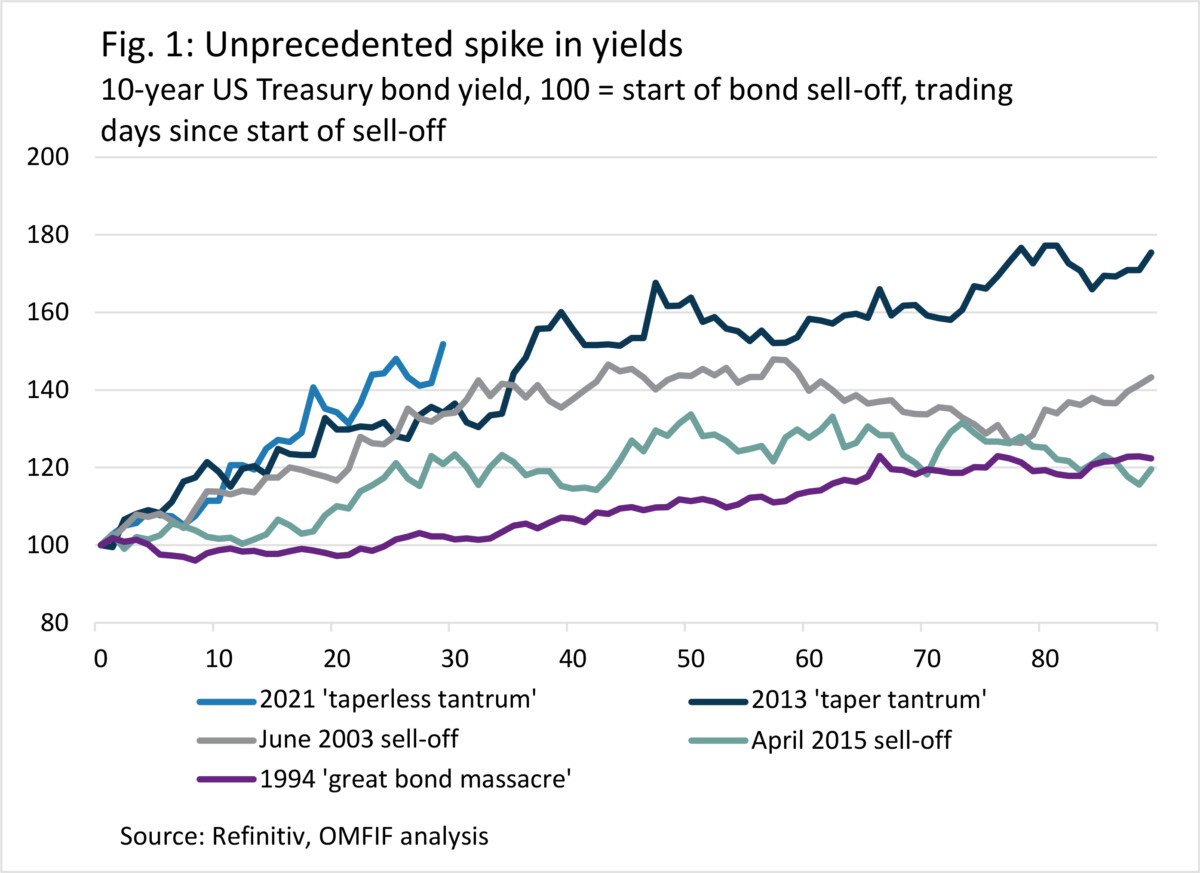 The drop in demand comes during a change in the composition of holders in the Treasury market (figure 2). Primary dealers, who absorb issuance at auctions, last week sold off their inventories of US government bonds by the largest amount on record, by $64.7bn to $185.8bn. For the FOMC, this should signal banks’ concern around the forthcoming end of the supplementary leverage ratio exemption.

This pandemic regulatory relief, which exempted central bank reserves and US treasuries from capital requirements, is set to expire on 31 March, putting banks under pressure to trim their portfolios. Both reserves and bond supply are set to swell during 2021, with the former rising due to the wind down of the Treasury general account at the Fed and the latter due to Congress passing the American Rescue Plan, as well as a potential future infrastructure package. 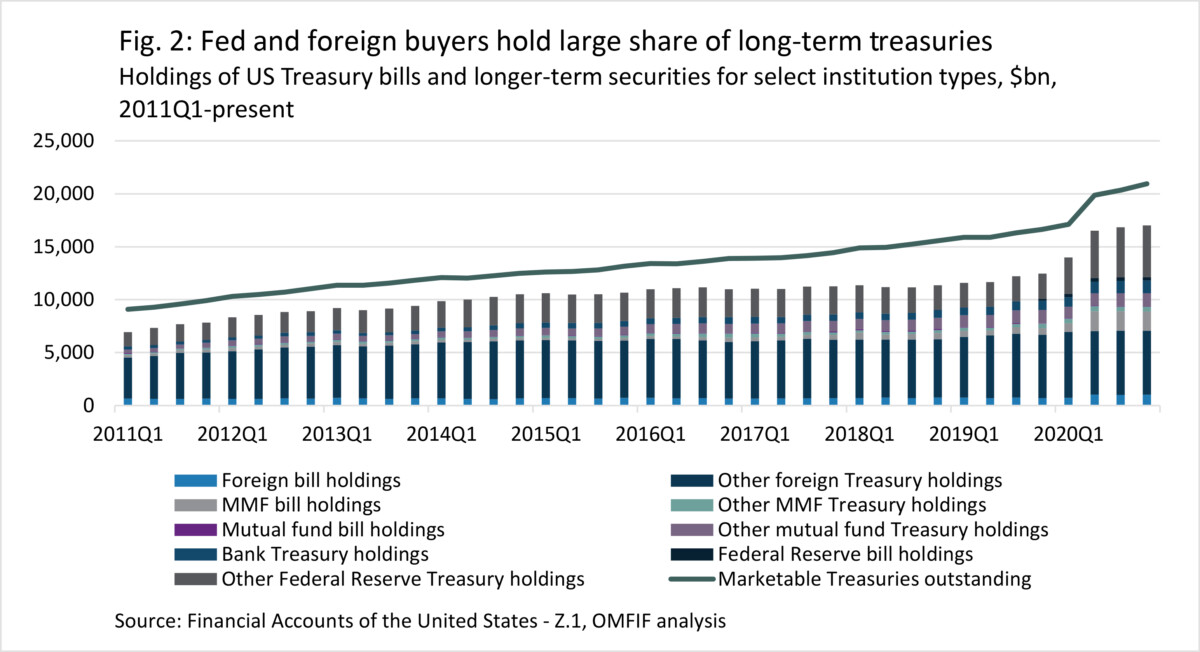 Does it make sense for essentially two forms of cash – reserves and US government bonds – to add to tier 1 capital requirements? Either way, uncertainty over whether the exemption is set to continue has contributed to volatility, and Chair Jerome Powell may feel compelled to explain the Fed’s thinking.

But even if the SLR exemption were to continue, it’s not clear that banks would be able to absorb issuance to any meaningful degree. JP Morgan – by far the most important player in intermediating flows of treasuries and reserves – is capped out in its ability to perform this function. As Zoltan Pozsar, managing director of Credit Suisse, noted in his subscriber newsletter on 12 March, its 12% tier 1 capital target and desire to avoid rising from a 4% to 4.5% globally systemically important bank surcharge ‘effectively operate as an ‘asset cap’.’ Similar regulatory constraints hold for many other key banks, while Wells Fargo still faces an asset growth ban imposed by the Fed in 2018.

Banks won’t be able to assist much in the intermediation of the forthcoming flood of reserves and treasuries. Meanwhile, money market funds will be able to absorb shorter-term issuance – especially bills, which have been in frustratingly short supply in recent months – but provide little relief for the long term (figure 3, taken from a Treasury presentation to TBAC). 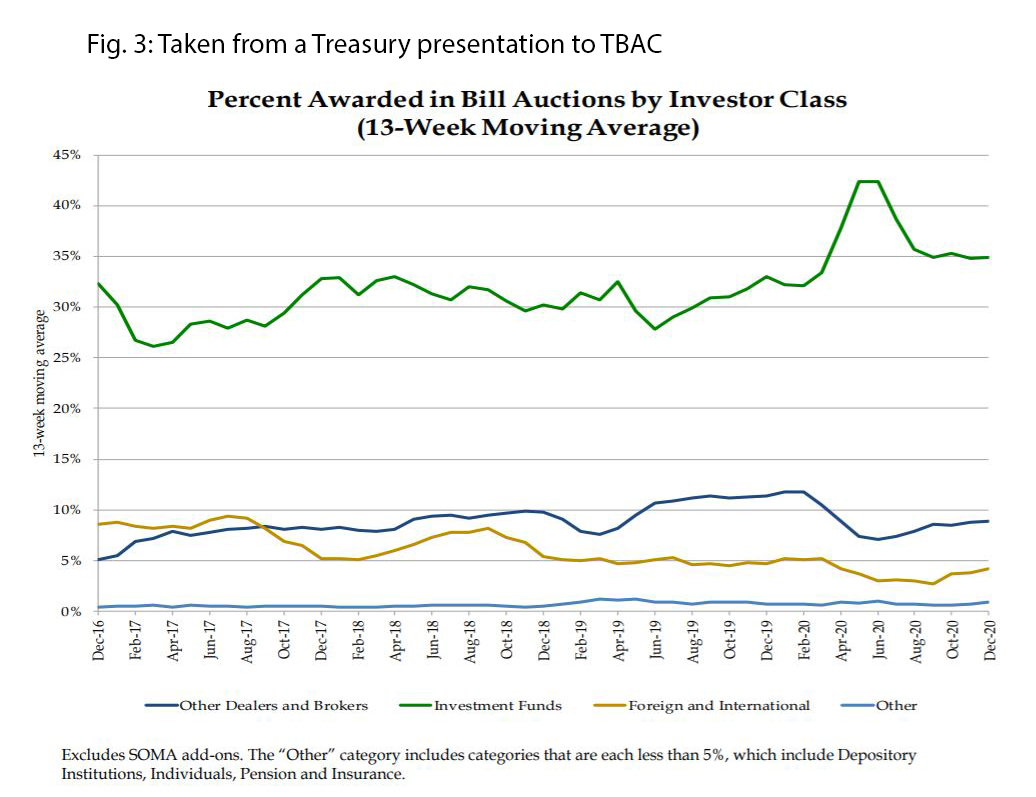 Figure 2 suggests that it is foreign buyers – especially central bank reserves managers – who absorb long-term issuance. And changes in the costs of currency hedging suggest that the Treasury market is set to become much more attractive to this group. A large share of these international portfolios hedge their Treasury holdings back into their domestic currency, typically on a three-month rolling basis. In the past, particularly in 2019, this meant that treasuries provided less yield than domestic bonds. For a Japanese pension fund, a hedged 10-year treasury was less attractive than a domestic Japanese government bond (figure 4). 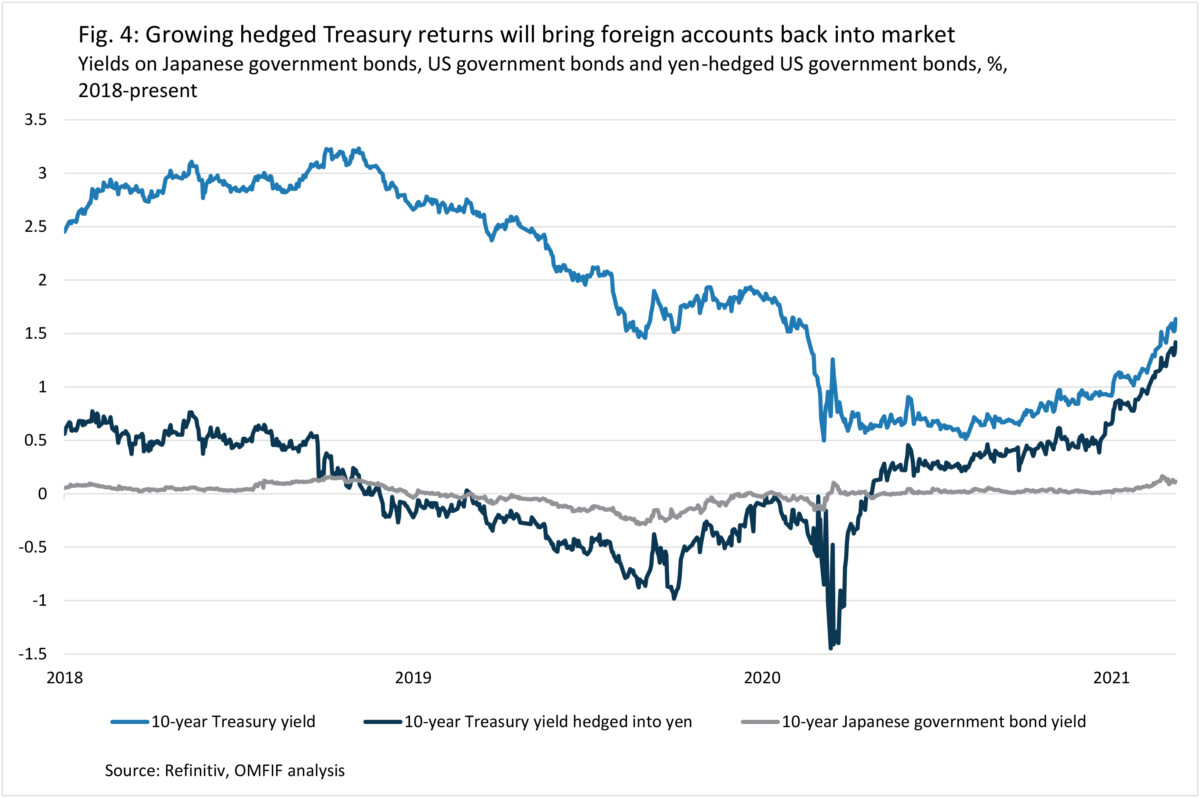 This trend has reversed dramatically since the onset of the pandemic and has been intensified by the recent steepening in the US yield curve. The convergence in global long-term interest rates brought about by Covid-19 has reversed, with US treasuries now providing significantly more yield even on a hedged basis. This could bring yield-starved reserves managers and pension funds back into the US government bond market, partially answering the question of where long-term issuance will end up.

The changing composition of Treasury buyers is important and buys time for the FOMC to consider its options. But the US government bond market is not your typical market. The demand and supply dynamics that might apply to other asset classes do not govern the Treasury market in the same way – the yield on government bonds is, to a large extent, a policy choice. The surge in yields in 1994 especially should serve as a reminder that in the US, the ‘bond vigilantes’ led by Alan Greenspan, were keen to impose deficit reduction on the upstart administration of Bill Clinton.

While inaction was the policy choice in 1994, the Fed has tools to stem the rise in yields if it desires. In its June 2020 meeting, the FOMC discussed the possibility of yield curve control, deciding at the time that ‘it was not clear that there would be a need for the Committee to reinforce its forward guidance with the adoption of a YCT policy.’

Now that the Fed’s forward guidance is increasingly in doubt, however, it may be worth revisiting this discussion. Australia’s experience with YCC – which the FOMC identified as ‘the most relevant for current circumstances in the US’ – has been relatively successful in keeping a strict cap on its target three-year yield without requiring excessive purchases of government debt (figure 5). This may provide a simple path to alleviating pressures on US government bonds. 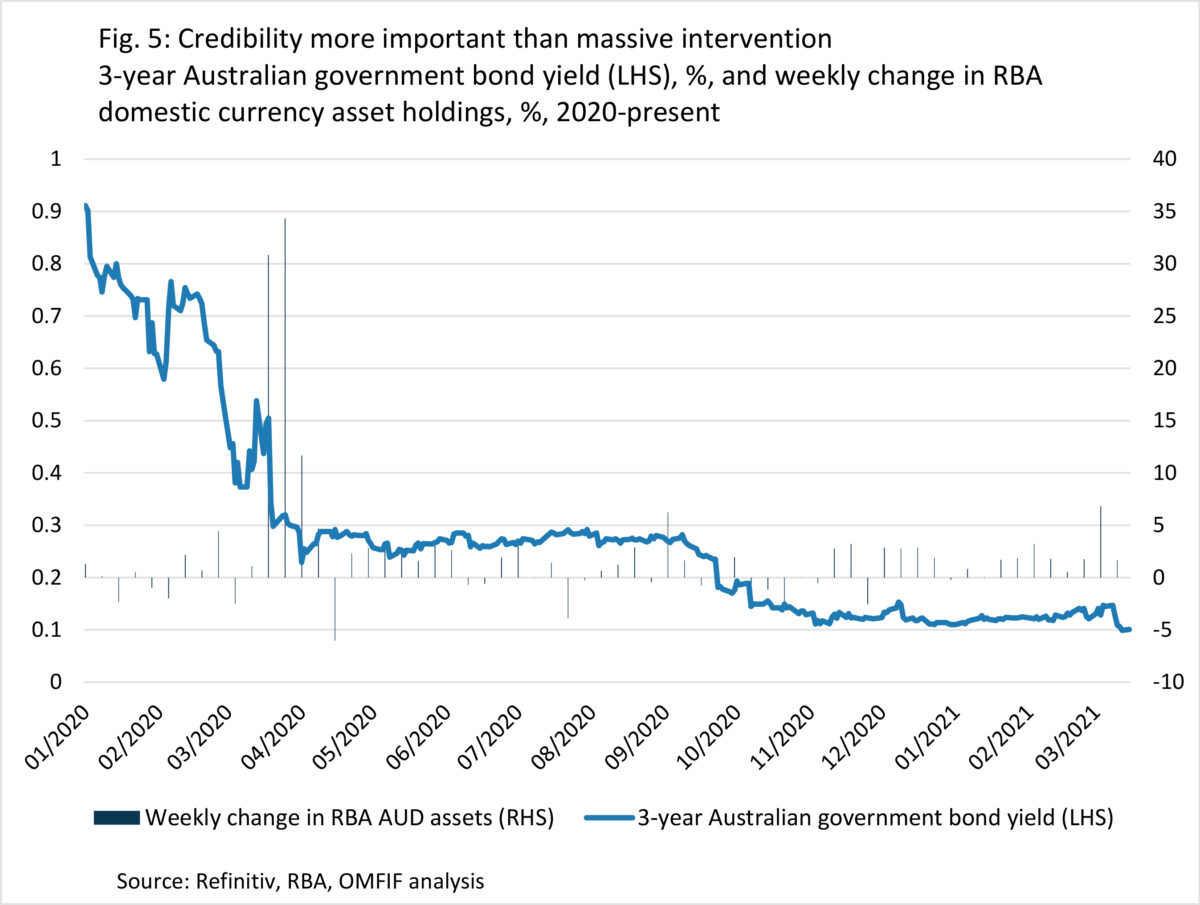 The Treasury market presents a challenging problem for the FOMC. Yields have risen dramatically, at a pace that has proved difficult for markets to digest and has resulted in considerable volatility. This is concerning, but has so far had little spill over into other asset classes, and financial conditions remain extremely loose.

If the Fed chooses to stay put and strengthen its forward guidance, it may leave the Treasury market at the whim of forces with highly uncertain magnitude and direction. This may play out in its favour. But if financial conditions get out of hand, the Fed may be forced to eventually quell long-term yields with more powerful policy tools on unwanted terms.