Arbitrage and reflation in the gold market 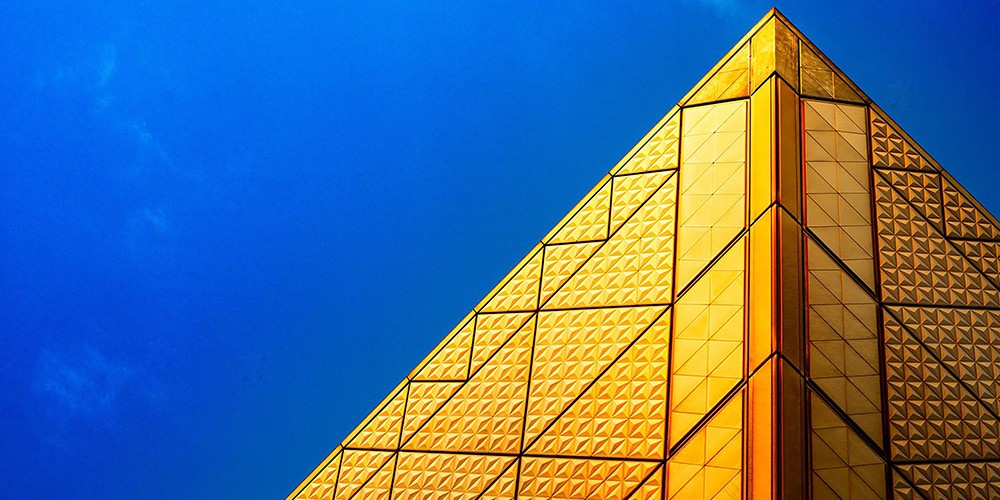 In early July, Kurtulus Taskale Diamondopoulos, director of central banks and public policy at the World Gold Council, explained in an OMFIF podcast how central banks were adapting their gold purchases to the Covid-19 environment. They have continued adding to their gold stocks, albeit at a slightly slower pace than in past years, and purchases remain concentrated on central Asia.

Since then, gold has continued its resurgence. The gold price rose in London on 6 August to a new high of $2,040 per ounce. US imports of gold have surged, rising more than 1,000% year-on-year in April. 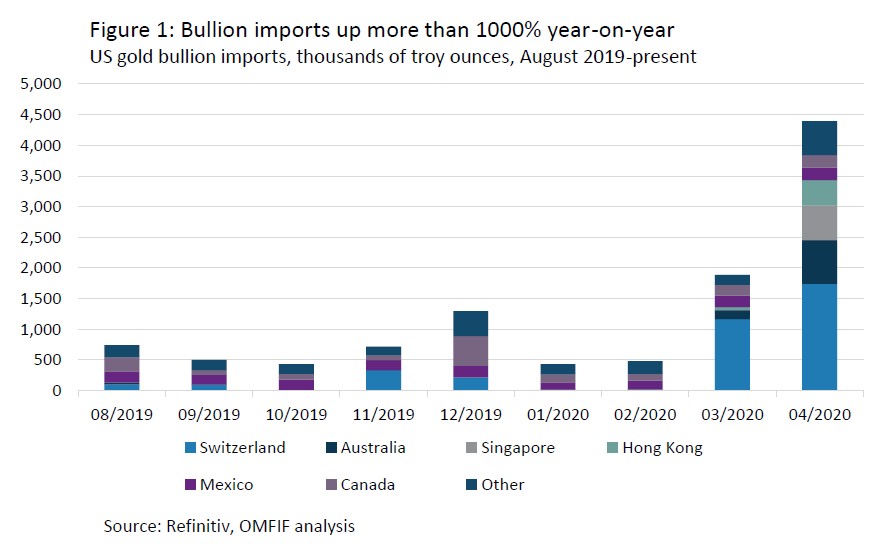 The global gold market is registering record levels of activity. Typically, gold market discourse in recent years has tended to focus on consumer and central bank demand from Asia. Over the past few months, the US has been driving two landmark trends. One relates to market structure, the other pertains to the Covid-19 response and the future of the international monetary system.

First, travel restrictions and general pandemic uncertainty between March and May led to a temporary widening of the spread between gold spot and gold futures prices, known as the gold spot spread. Generally, London spot and New York Mercantile Exchange and Commodity Exchange futures trade tightly, with banks rapidly arbitraging nascent spreads. Yet with refinery capacity down and heightened transport frictions into early April, the spread failed to close; banks running short futures positions were not certain they would be able to deliver 100oz Swiss gold bars in New York. Gold is generally traded speculatively – it is rarely actually delivered to the end-owner. Nevertheless, doubts about their hypothetical ability to deliver caused short futures traders to bid up prices in an effort to close their naked short positions.

As uncertainty abated somewhat in early May, spot prices rose to meet futures prices, closing the spread. This produced some of the initial impulse driving gold prices, and boosted US gold imports as investors sought to cover potential delivery.

The second factor behind the gold price rise is generalised anxiety over the US economy, and the future of the dollar as a reserve currency.

Last week, Goldman Sachs analysts argued that there were ‘real concerns around the longevity of the dollar as a reserve currency’ due to ‘an environment like the current one where governments are debasing their fiat currencies and pushing real interest rates to all-time lows.’ This reflects broader apprehension about post-pandemic price stability and the longer-term impact of central bank action. The analysts encapsulated widespread worry that the US will debase its currency to reduce its rapidly accumulating debt burden.

This has precedent. After the second world war, quick bursts of inflationary growth dramatically reduced the combat-induced debt burden. 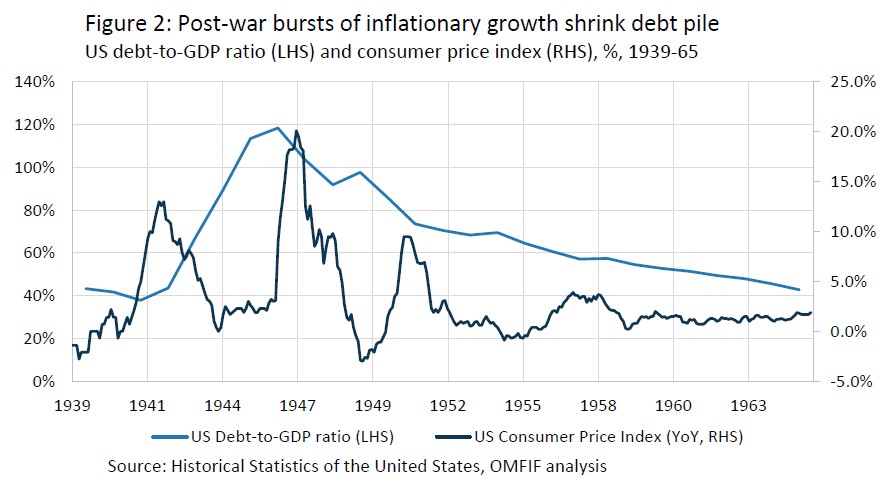 Yet elevated debt-to-GDP ratios aside, circumstances are very different. Concerns about currency debasement and the future of the dollar as a reserve currency are misplaced.

First, five-year forward break-even rates on Treasury inflation-protected securities measure the difference between the yield on nominal US government bonds and inflation-linked bonds of the same maturity – a measure of market expectations of inflation. These have remained relatively low, hovering around 1.45%. In other words, investors believe that inflation will remain at this manageable level for at least the next five years – regardless of whether or not the Federal Reserve ends up adopting an average inflation targeting or inflation ‘make-up’ regime (under which inflation would be allowed to rise beyond the 2% target for an extended period).

Inflation running slightly above 2% is a far cry from post-war experience. The Fed’s determination to preclude substantial inflationary shocks should restrain inflation expectations and dispel worries about ‘debasement’.

Attributing gold’s rise to a paradigm shift in the global monetary system and the demise of fiat currency is far-fetched. However, inflation expectations have risen moderately in recent weeks, as the divergence between nominal Treasuries and Tips points has widened. 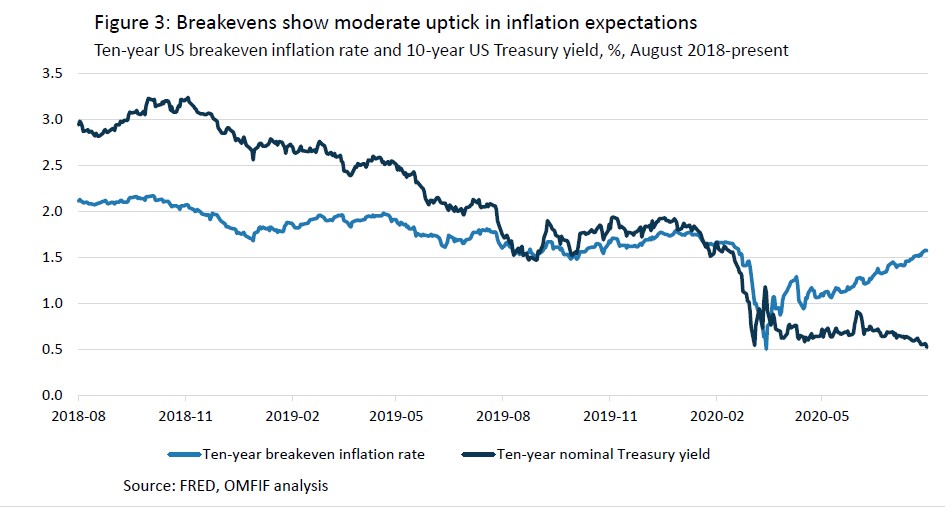 As a result, real yields have fallen, pushing up the gold price. Since the 2008 financial crisis, these two variables have had a smooth inverse relationship; as real interest rates drop, the opportunity cost of holding gold declines. 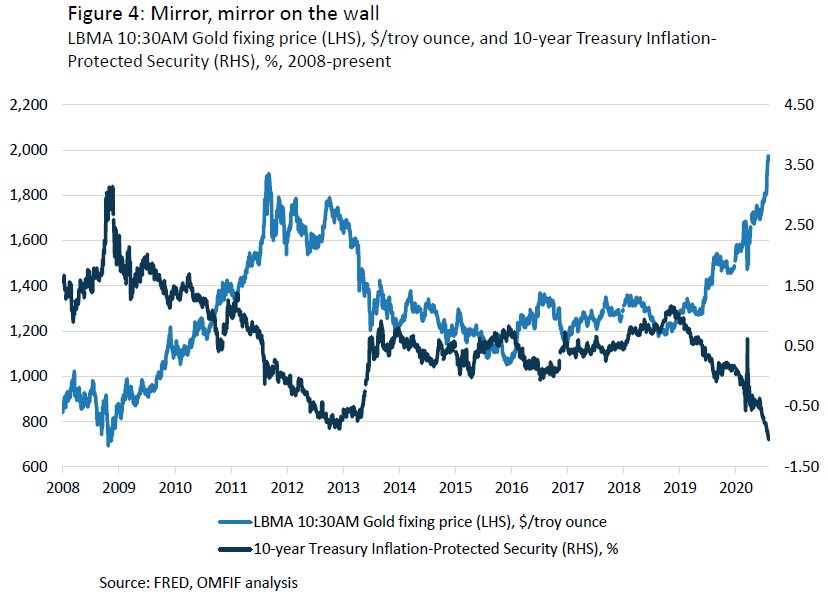 Rather than suggesting imminent currency debasement, the moderate rise in inflation expectations, and accompanying decline in real Treasury yields, indicate that the US economy is doing moderately well. This also implies that policy-makers have so far been successful in prompting some reflation of the US economy. While this is not certain to continue in the long run, given the forthcoming expiration of US fiscal stimulus packages and the growth in Covid-19 cases, the fall in real yields suggests that the US economy is in partial recovery. A strong US recovery and a moderate increase in inflation would not jeopardise the dollar’s global role. Demand for US assets and a continued lack of credible alternatives would entrench it further.

Developments in the global gold market revolve around the US. Its imports have surged in response to anomalies in market structure. Instead of pointing to panicked gold hoarding, the rise in demand partly reflects arbitrage trades. The decline in US real yields has further boosted gold’s spot price. But rather than suggesting panic about the future monetary and financial system, the yellow metal’s surge is a sign that the US economy is moderately reflating.